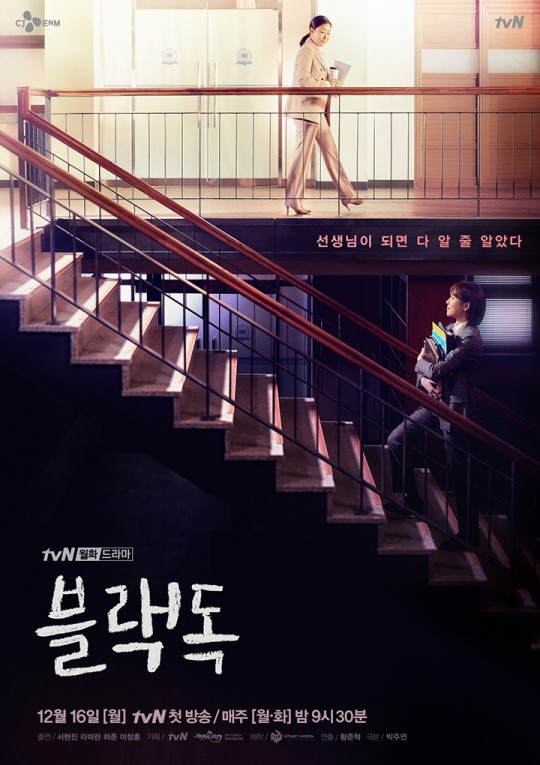 Seo Hyun-jin is at the center of the story as the character Go Haneul, who is a newly hired short-term teacher at a private school for one of her first ever jobs. She becomes the audience’s eyes and ears as she learns about the most intimate workings of the school, and the school reveals itself to be a micro society of its own. Just like the outside world, the school presents a challenging struggle between following your dreams and being realistic. The ray of light in all of this for Seo however, is Ra Mi-ran who plays Park Sung-soon. Having worked at the school for a much longer time and passionate about her work, she becomes a mentor and friend to Seo Hyun-jin.

The drama’s premise is nicely captured in the new poster with Ra Mi-ran standing on the upper level, in the light, and looking down at Seo Hyun-jin. Reflecting the character’s growth through the course of the story, Seo is shown walking up the stairs from the darkened lower level. The caption on the poster reads, “I thought I would know everything once I became a teacher.”

The newly released teaser is character-focused, comparing rookie teacher Seo Hyun-jin struggling in her new job with the more experienced Ra Mi-ran who spiritedly takes charge in all situations.

It starts with Seo Hyun-jin perplexed on the phone, “GPK?” while Ra Mi-ran stares at with a blank expression. In voice-over, Seo thinks, “It is not shameful to ask when you don’t know something” and she hesitantly raises her hand to ask a question. The text on the screen introduces her as: “Go Haneul. Korean language teacher/New hire in a short-term position.” Cut to Ra Mi-ran calling someone a bully straight out. During an argumentative staff meeting, Ra shouts, “The crazy dog in this district is me! We should at least let them re-confirm what happened.” The caption introduces her character as “Park Sung-soon. Veteran Korean language teacher/Head of guidance counseling for 10 years.”

Returning to Seo Hyun-jin, we see her greeting another teacher and hurriedly introducing herself, “It’s my first day today and I have something I want to ask.” In the classroom, her energy is drained by the rowdy students and she stammers at them to just take a break. As the students leave the classroom, she looks defeated and thinks to herself that she completely failed. Cut back to Ra Mi-ran rushing up the stairs and through the hallways with another teacher. In a professional tone, she asks, “Do you not agree that a teacher who gives up on a student first is someone who doesn’t deserve to be a teacher?” In contrast, drunk at a staff dinner, she slurs at them in a rage, “You guys are the ones who should be motivating the students!” Our next scene shows Seo Hyun-jin rushing to a classroom and we see her teaching style has changed to become more engaged with her students.

The teaser ends back in the staff offices with Ra M-ran speaking to Seo Hyun-jin, “You’ll be coming back next year, right?” before addressing someone else off screen. Seo looks surprised and Ra explains to the other party that “Seo is a hidden ace on our team.” At the close, we hear Seo Hyun-jin’s voice-over: “tvN’s Monday-Tuesday drama Black Dog.”

Writing for the drama will be done by Park Joo-yeon and directing will be helmed by PD Hwang Joon-hyuk (Bad Guys: City of Evil, Police Unit 38). tvN’s upcoming Black Dog is currently set to premiere in just a few weeks, on December 16, following Catch the Ghost.

Looks good! I hope it sticks to teachers and the challenges they face in the classroom. I like a bit of social commentary but I don't need every school drama to be about how unfair and competitive it is in the "real world".

This is the first time i feel i could like seo hyun jin in a role.

I’ll be watching this. I like Seo Hyun Jin. For some reason, the synopsis of a mentor-mentee in a school struggling between following your dreams and being realistic suddenly reminded me of “Dead Poets Society”. I wonder if this drama could be something like that.

This continues to look better and better as we near the premiere. I am so excited!

eh I'm not much of a school drama fan but I love Seo Hyun Jin and Ra Mi Ran so maaaaayybbeee I'll watch it. Just maybe.

This looks good! I love both these actors, Seo Hyun-jin and Ra Mi-ran, so I'll try it when it starts.