Photos from first script read for tvN’s My Unfamiliar Family 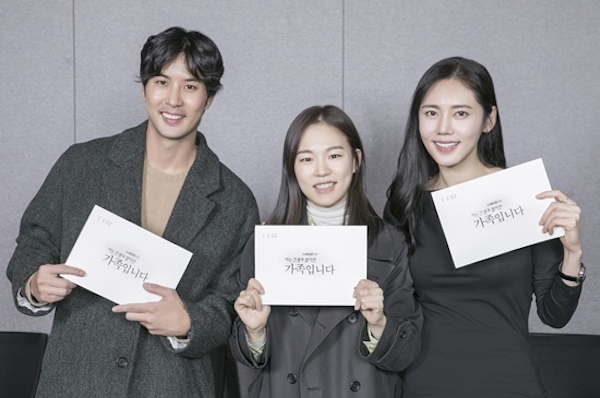 Upcoming tvN drama My Unfamiliar Family, previously known as (I Don’t Know Much, But) We Are Family, held its first script read on March 25. The drama is about family dynamics, and the relationships between biological family who are more like strangers, chosen families, and the misunderstandings that happen in between. As children grow up, time spent with their parents decreases, their unsaid secrets increase, and eventually they grow apart. My Unfamiliar Family seeks to pull apart these complex, bittersweet relationships and show how they naturally evolve over time in a realistic way.

At the center of My Unfamiliar Family, Han Ye-ri (Nokdu Flower) plays the optimistic second daughter for whom thoughtful consideration is automatic. Kim Ji-suk (When the Camellia Blooms) plays her college friend of 15 years with whom she has a bickering relationship. He has a carefree, independent personality and confronts reality head-on. Shin Dong-wook (Romantic Doctor Teacher Kim 2) plays the senior vice president at the publishing company where Han Ye-ri works. 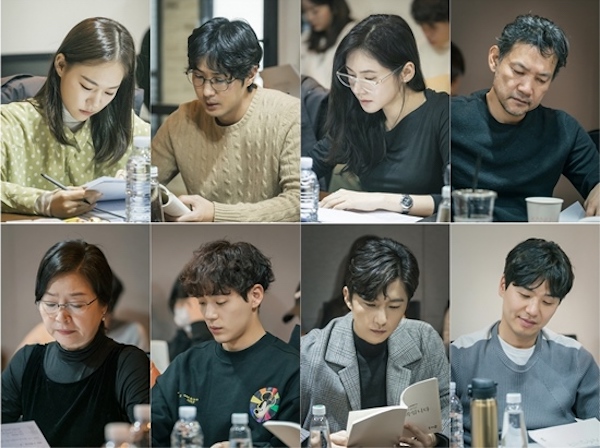 Chu Ja-hyun (Arthdal Chronicles) plays Han’s sister and is the eldest daughter of the family. She’s a former patent attorney who’s a prickly, harsh realist. All of her decisions in life are based on rationality and logic. Her husband will be played by Kim Tae-hoon (Kingdom 2), whose character is the eldest son in a family with a long line of doctors. Shin Jae-ha (VIP) plays Han and Chu’s younger brother, the energetic maknae and mood-maker of the family.

Jung Jin-young (Chief of Staff 2) and Won Mi-kyung (The Most Beautiful Goodbye) play the parents of the sibling trio. Jung Jin-young plays the role of father with a weightiness appropriate to the head of a household, and Won Mi-kyung plays a lifelong housewife and mom who is readying herself for a new life after her work for her family is done.

Annnnd we have to choose between Kim Ji-suk and Shin Dong-wook, why? why? why? Can we have both? Can't wait to see Kim Ji-suk bickers like crazy and being petty for the sake of being petty with Han Yeri. 😁
Thank God it is not a weekend drama with 50 something episodes in line. And it is on TvN yay

Yeah, from the description, I thought it would be a weekend family drama with 50+ episodes. Also, the main photo is confusing. I thought the leads would be the three people pictured above, not Shin Dong Wook's character.

The synopsis and cast certainly feels like a 50+ weekend family drama.... looks like it will be broadcast after A Piece of Your Mind [Half a half]?
See,s tVN is testing the Mon-Tue drama timeslot with various genres...

Typos-Half of* half, Seems* tVN

Kim Ji-suk, I like him since Another Oh Hae-young. As for Kim Dong-wook, haven't heard of the name before so I searched his name online and found that he is Dr.Bae in Romantic Doctor 2! Now I just don't have any idea as to whom I should root the FL with..

Shin Dong Wook. Kim Dong Wook is a different actor. He's currently starring in "Find Me In Your Memory" with Moon Ga Young.

Lol.. thanks for the correction! It's Shin Dong Wook all right.

ok the writer i am like eh....but family dynamics and chosen families are my jam rn. hopefully it gets it right. not all people who are meant to love you can, and not all people who don't share your blood can't love you to the fullest. looks like a great premise and cast. and i just love han ye ri!

I like Han Yeri and her acting. It's gonna be good.

I haven't had much time to watch weekend dramas in a while so I'm very glad this drama is kind of like a weekend drama squished into 16 episodes! i love the cast a lot so i'm definitely tuning in

Thank you for the update on MY UNFAMILIAR FAMILY, @tineybeanie. I'm tickled to bits to learn that Shin Dong-wook will be back in Kdramaland so soon after his turn in RDTK2. I'm stoked at the prospect of seeing Han Ye-ri, Kim Ji-suk, Kim Tae-hoon, and Jung Jin-young, too. Let the bickering begin.

Families of choice are my catnip. I like the idea of a family drama of shorter duration than 50 episodes. Please give us a story that's long enough to develop meaningful character arcs but short enough to avoid wheel-spinning and other wastes of time and talent.

Love the idea of family drama squished in 16 episodes. And on top of that Han Ye-ri , Kim Ji-suk and Shin Dong-wook as the main trio?!
Sign me in!