When I Was the Most Beautiful

Ji-soo, Ha Suk-jin fight for Im Soo-hyang in When I Was the Prettiest 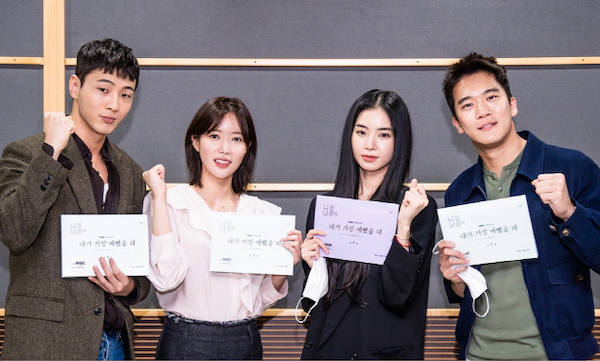 MCB’s new drama, When I Was the Prettiest, recently held its first script reading. The upcoming drama is about a pair of brothers fall for the same woman by a twist of cruel fate and so they face a bridge they cannot cross. Im Soo-hyang’s (Graceful Family) will play the female lead, and Ji-soo (My First First Love) and Ha Suk-jin (Your House Helper) are set to play the brothers.

Director Oh Kyung-hoon (Thief-nom, Thief-nim) began the script read by saying, “I feel new, deep sentiments. For half a year, we will gather together, laugh together and film together, and I hope we will make the drama a success together.” Writer Jo Hyun-kyung (Grand Prince) added, “I hope the process of making this drama will be filled with happiness.”

Im Soo-hyang’s character is innocent and spunky, with a tough mindset. When the actress acted a drunken scene at the script read, everyone in the room was apparently charmed by her cutesy side. Ji-soo falls headlong for Im Soo-hyang and his love doesn’t fade even though he knows their relationship can’t be. Despite his efforts, he cannot forget her because she’s his first love. His character often vacillates between being hot and cold, unlike his brother, played by Ha Suk-jin, who is the epitome of a chic, chado-nam (cold city man). When Ha Suk-jin wants something, he doesn’t stop until he gets it. 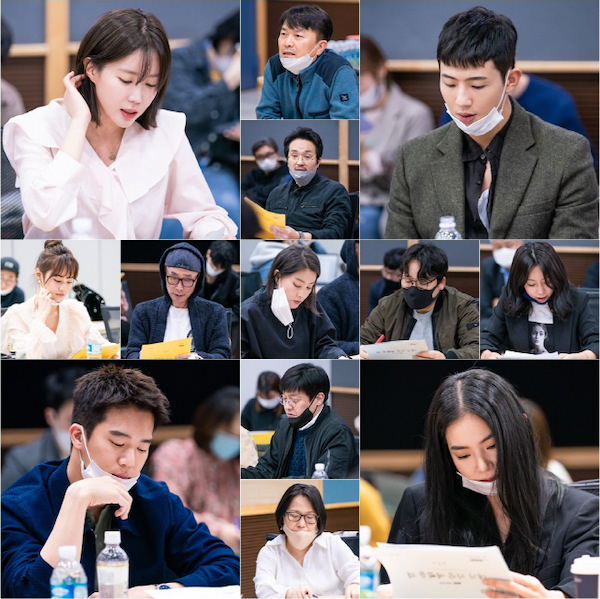 When I Was the Prettiest sounds like a traditional melodrama, but I hope it’s peppered with some good humor because Im Soo-hyang is great in comic scenes (Exhibit A: Graceful Family). Also, I need Ji-soo to get more happy endings, so I hope this one isn’t a tragic melo.

MBC Wednesday-Thursday drama When I Was the Prettiest will begin airing in August.

Tags: Ha Suk-jin, Im Soo-hyang, Ji-soo, When I Was the Most Beautiful

It's such a shame because I love all the actors but I hate the plot. It's super dated and unless it's directed super well like World of Married (from what I heard) it's gonna be super cliched in a bad way

IKR? And, please, can we just stop with these "first love" tropes already?

I can't stand anymore the "first love", it's really getting on my nerves. People, please move on!!!!

This made me think of Dinner Mate

And the most vivid memory he will have of his first love is tying her shoelaces. Because we all know that K-girls never learn to do that themselves.

Oh lol this so true. As a girl, I would be super uncomfortable if someone tied my shoelaces for me. That's something you learn in childhood

The only reason I would watch this is Ha Suk-jin, but not even him is enough. The story is so full of cliches... they brothers loving the same woman, the confident one, the unlucky one, the evil ex-girlfriend.
What else? A truck of doom that causes amnesia and childhood memories erased...
Anyway, I'm many will enjoy the drama. Actors are great.

I am sure they will toss in an evil chairman and an evil mother also. I think I will pass on this - sounds like nothing but a formula driven cliche fest.

Is Ha Suk Jin gonna play an a** again? Will Ji-soo be second lead again? I don't mind cliches, but I honestly feel like I've already seen this drama. I'll still give it a go though.

I know, how many times has Ha Suk Jin played the cold perfectionist? And how many times has Ji Soo had his little puppy heart broken? And why, when there are so many interesting, interesting relationship twists that happen in real life, do we have to have this one that almost never happens?

It seems we only get to see those different twists in movies. I really want to know if it is mandatory to follow at least one of the tropes. Even shows that changed it up a bit, still have at least one kdrama trope. I'm hoping that this drama is different.

Maybe the writers have a manual or template to follow. I’m so tempted to draw a mind map of kdrama tropes now.

I have seen so many blog posts on this, but not a map! That would be amazing! It's like a bingo. LoL

Innocent spunky heroine?Two brothers who 'love' the same woman? Elder one's a cold city man? Is this a remake of Drinking Solo??
Also can't HSJ get another character type? Hot city man? Cold village man? Don't get me wrong,he plays the type well but I'm pretty sure he can do other roles.
That being said,I'll probably tune in coz I like the cast 😅Please be good,fighting💪

I will watch for Im Soo Hyang, I was so charmed by her last drama that she made me a fan for life. That being said I must echo the plot being worrysome.

Has Ji-soo been typecast as a second lead or is he choosing these roles intentionally for some reason...

Aaarrrgh! The plot is a bloated, flabby retread. The heroine is cute and spunky (my teeth are already aching) and innocent (so holding hands is a Big Deal, forget about a decent kiss). Ha Suk Jin and Ji Soo can dial it in from about 10 other parts they've played that are exactly the same. But then I read that Kim Mi-kyung is playing the mom. Sigh. Where she goes, as a true fangirl I must follow.

Same usual stuff but I think Jisoo is the main lead this time. Just guessing because Soompi and all mentioned jisoo's name first. Their heading was something like, "Ji Soo, I'm Soo-Hyang and all attended script reading" I was surprised to see Ha suk jin concluded in an "all" haha.
Anyway, even if this is true, it is not a pretty twist for me, only good for ji-soo fan girls/boys.

I really really liked Im Soo Hyang in her previous drama. I want to watch this one but the plot sounds so boring. Will wait positive feedbacks from the Beanies before I give this a go.