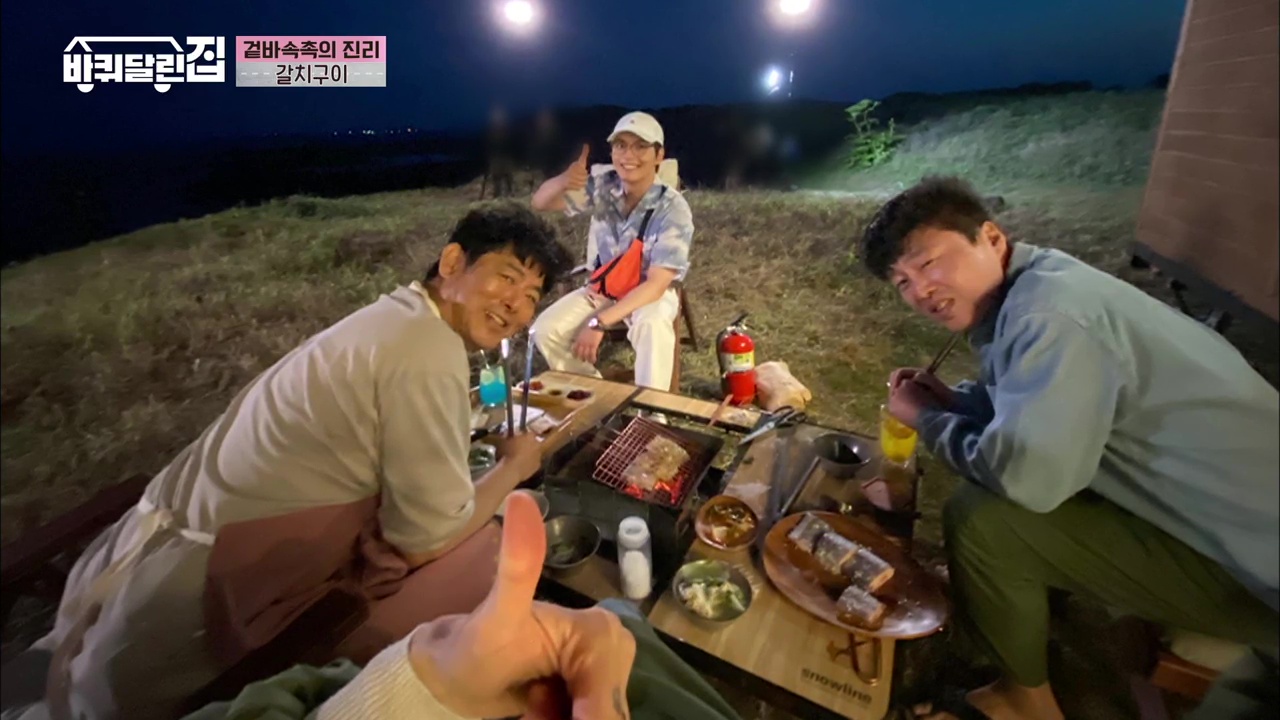 Our cast and their special guest are still exploring Jeju, but this week they move from the beach to a new setting: the forest. While the locale might be different, the punchline remains the same—yummy food, the great outdoors, and honest conversations shared by people enjoying each other’s company. 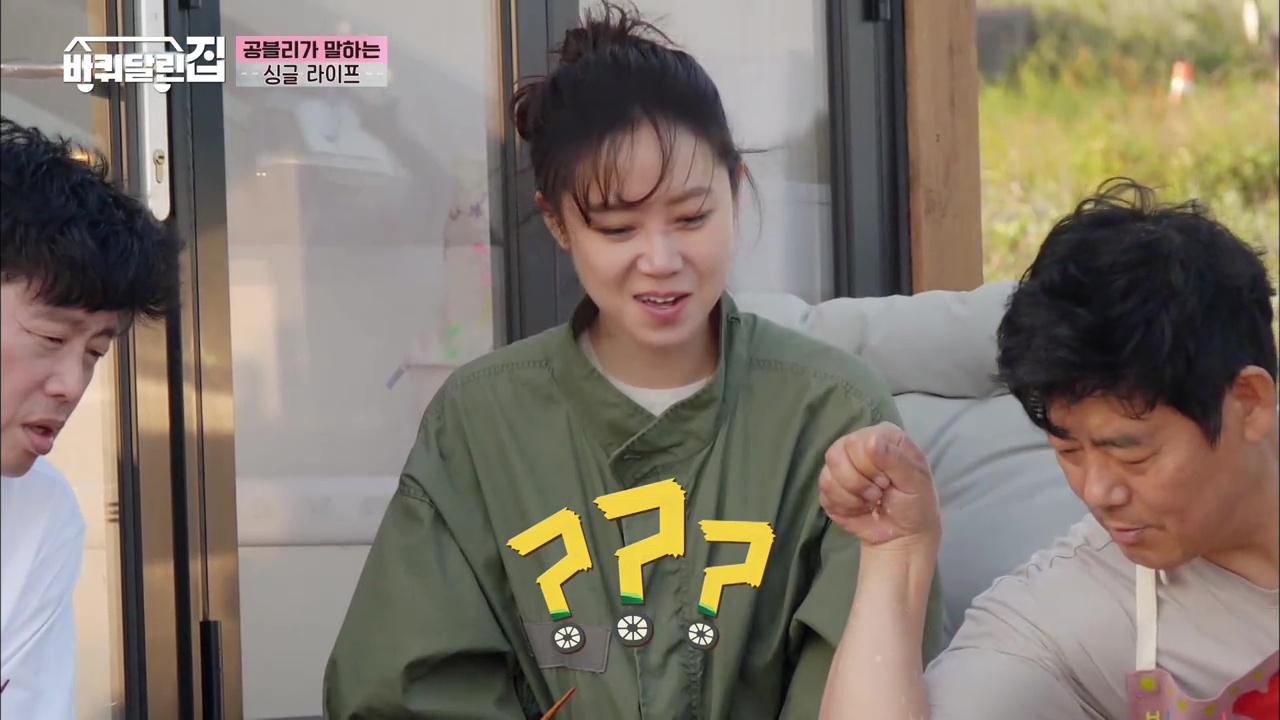 We rejoin our tiny house occupants in the middle of their dinner. The fire is still burning with a tomahawk pork chop cooking away on the grill. Dong-il breaks out another Salt Bae performance, and judging from Hyo-jin’s astonished reaction, she somehow missed the Salt Bae phenomenon when it first happened.

Their conversation flows naturally, and Hyo-jin wonders if Jin-gu can understand their concerns — what with him being so bright-eyed and untarnished by the world. She once thought love trumped all, but now thinks all the adults who told her to focus on work had a point. 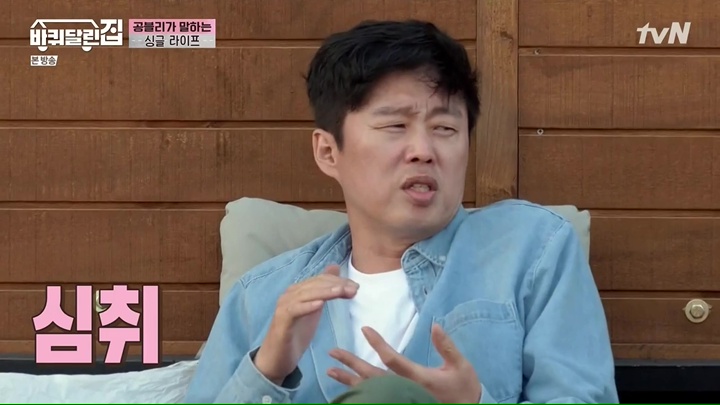 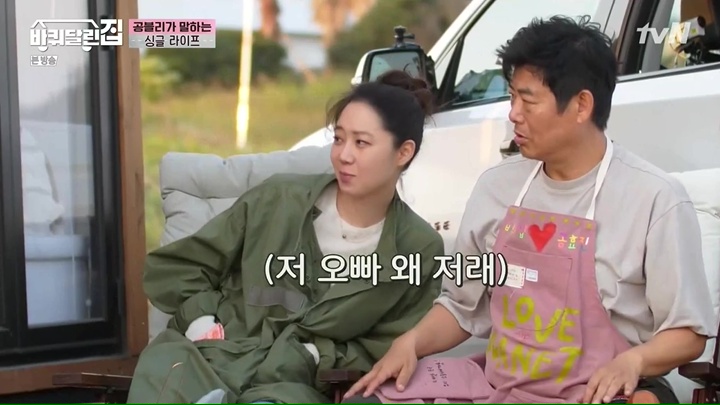 She says Jin-gu’s an unusual case though, since he’s been working since he was a kid and hasn’t had a chance to do the normal dating stuff other people his age have.

Jin-gu says he’s nursed unrequited feelings before and Hyo-jin sizes him up and correctly guesses that he’s actually never dated at all. Hee-won teases him and says Jin-gu’s in a more dire position than he is.

He shows his romantic side and says love turns you into a poet… and then you taste the bitterness of life. However, knowing that bitterness is also a type of happiness. Despite that cold dose of reality, Jin-gu says he still wants to date and even get married someday which makes Hee-won joke that Jin-gu is on the wrong variety show. 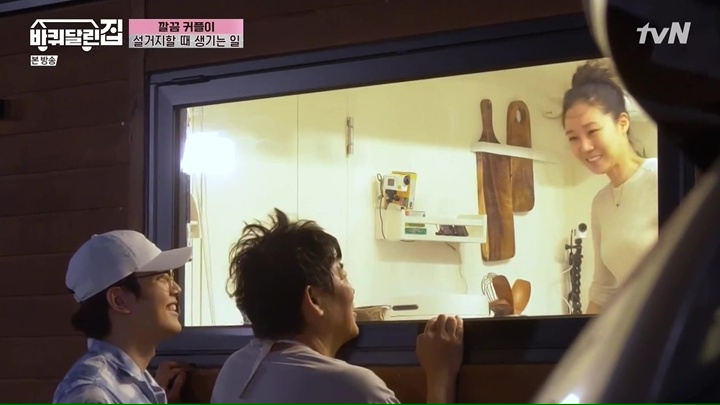 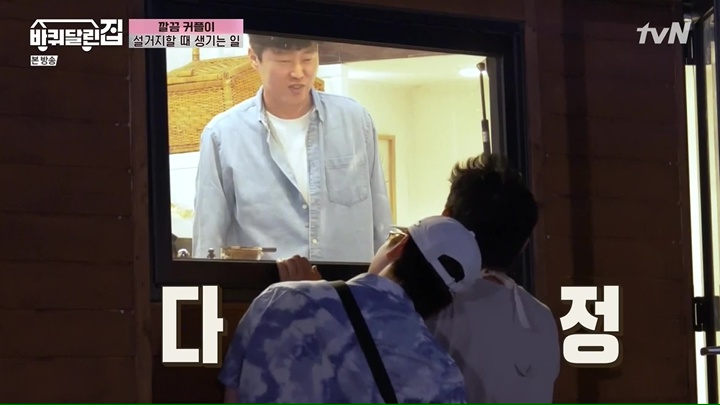 The pork chop has finished cooking and Dong-il is a total dad — he insists on everyone eating before he even has a taste. He has a big smile on his face, and says he find it very satisfying to see everyone enjoy his cooking. Even though she’s full, Hyo-jin wants to try the beltfish so Dong-il puts a few pieces on the grill for her and they begin cleaning up while they wait for the fish to cook.

Hyo-jin volunteers to do the dishes and Hee-won “assists” (he mostly just stands next to her and marvels at how fast she is). The pair look like an old married couple and Dong-il play acts by pretending to be their new neighbor.

Hyo-jin and Hee-won play along and say they’re newlyweds. What a coincidence, Dong-il says he and Jin-gu are also newlyweds (Jin-gu gets straight into the act and lovingly rests his head on Dong-il’s shoulder, LOL). 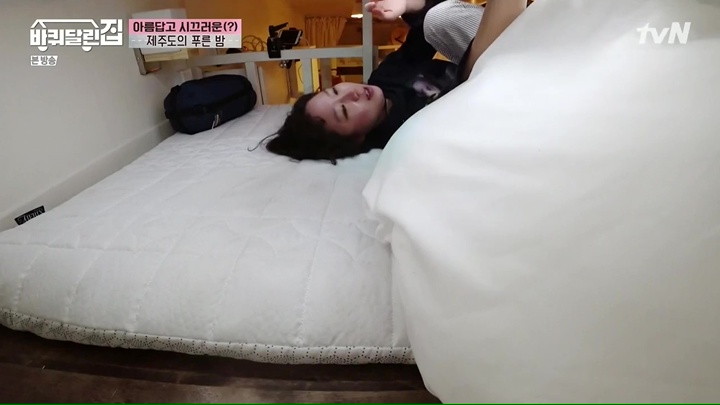 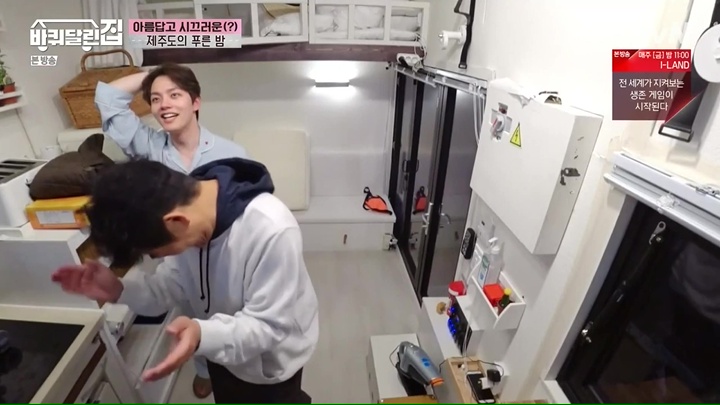 They top off the evening with bites of grilled beltfish; they enjoy some quiet time on the beach listening to the sound of waves before settling in for the night.

Hyo-jin and Jin-gu each take an upper bunk bed and despite Hyo-jin’s worries about cramming herself in the space, she fits. She even does an impromptu acrobatics show as she tests out how much space she has.

Hyo-jin is greeted by flies, which she calmly waves out through her skyroof window. I really like her easy going and down-to-earth personality – I’m pretty sure I would not have reacted as calmly as her! 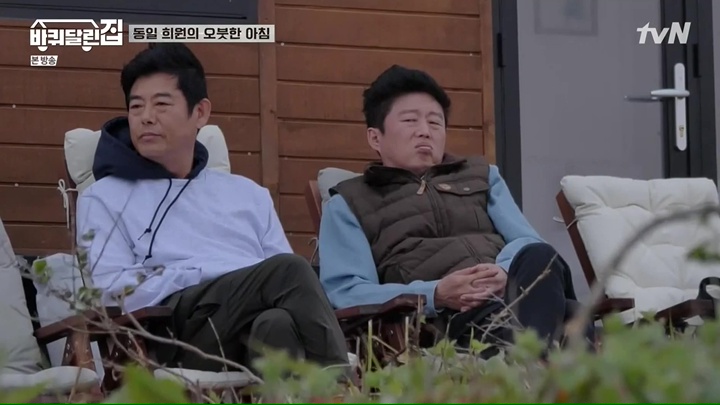 The next morning, Dong-il is the first to wake up. He knocks over some items while looking for a change of clothes, unintentionally waking up Hee-won. It’s only 5 a.m. so the two of them sit outside on the windy beach to enjoy the morning view of Mount Halla.

Hee-won shares that he finds it precious to be able to shield your loved ones from wind and rain, and their conversation ends up looking super emotional because the strong wind keeps making them tear up.

At the very late hour of 6 a.m., they go back inside to wake up their hoobaes. When Hyo-jin gets out of bed, she shares that she actually made a bathroom trip last night without using the ladder. We get a replay of the night camera footage and Hyo-jin stepped on the kitchen counter to make her “escape.”

Everyone has a quick breakfast of bread with jam and butter before heading off to their next location for a fishing trip. 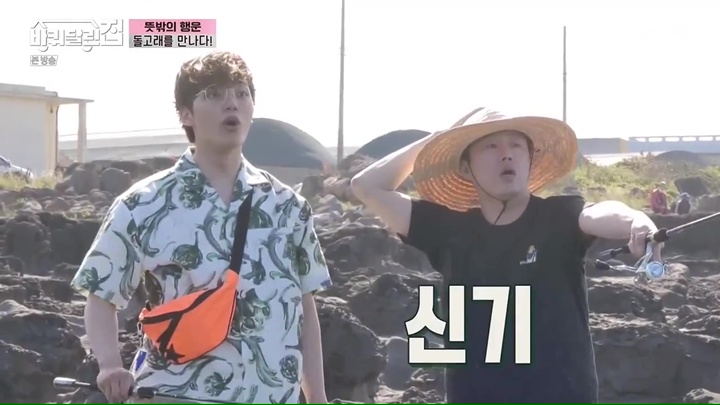 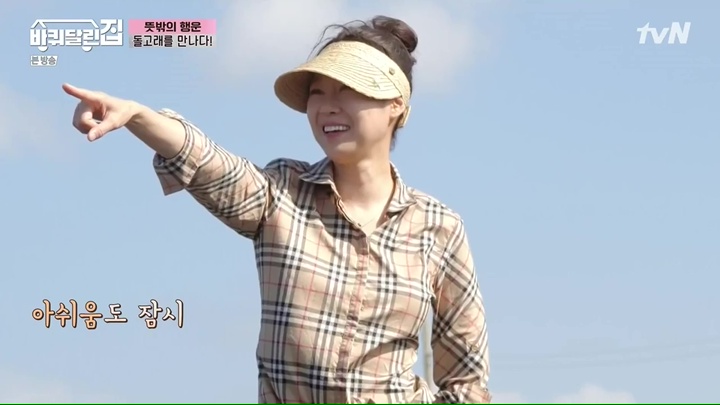 Fishing was something that Jin-gu wanted to try, and though they’re ready with all the right equipment, the wind is so strong that there’s no way for them to fish. As they’re packing up to head back to the car, they spot a baby dolphin, frolicking by itself. The little fella (gal?) rejoins its pod and we see them all playing with each other, swimming side by side. 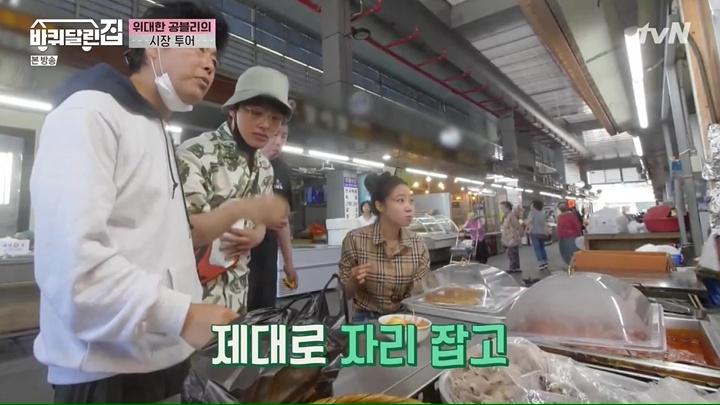 Taking a stroll along the waterside, they encounter a group of Jeju’s famed haenyeo (literally “sea women” in Korea, a.k.a. divers) selling their catch of the day: fresh sea urchins and conchs. Dong-il asks them to open a few conchs to have raw, right there. They pack up the rest to take home, along with some sea urchins.

Their next stop is the local traditional market. Dong-il doesn’t want them snacking in case it ruins their appetite, but one plea from Hyo-jin changes his mind and instead they eat their way through the market. They have fried rice donuts, fried peppers, and dukbokki made with a seafood broth. 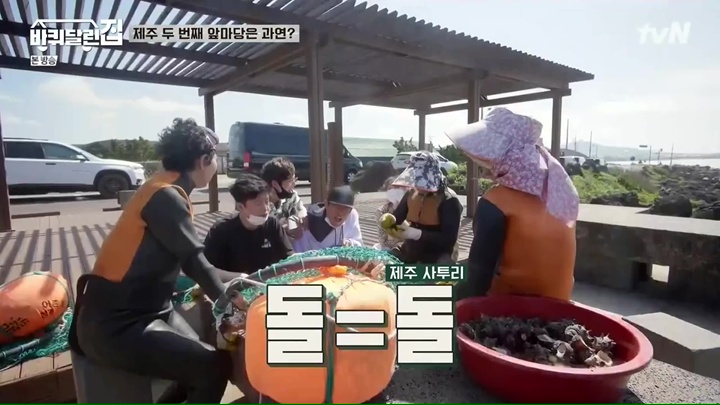 Bellies full (for now!), they make their way to their second “front yard,” Meochewat Forest. As they drive we see a little glimpse from earlier of the cast talking with the haenyeo and trying to get a Jeju satoori lesson and suss out the meaning of Meochewat, but it fails spectacularly.

Jeju is known for having a satoori that’s hard to understand, even for other Koreans. So “dog” might be “dug” instead, and some words are completely different — but every word that Hee-won and Dong-il ask about in Jeju satoori sounds exactly like standard Korean. (Example: “How do you say stone in Jeju satoori?” Haenyeo: “Stone.”) 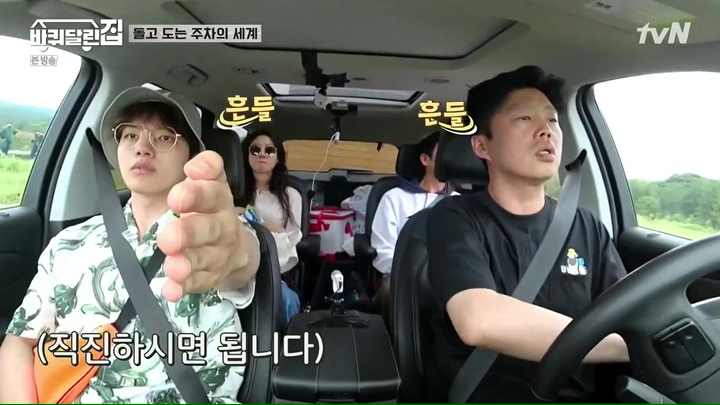 Coming along with the change of scenery is a rockier-than-average road. Hee-won encounters more trouble when parking. After multiple tries and driving around in big circles over and over, Hee-won finally manages to align the house with the wooden deck that had been set up for them.

He emerges from the driver’s seat, worn out from the drive and parking. He deserves a lot of credit, backing up is difficult when you can’t see anything behind you!

Enjoying the peaceful atmosphere, they sit back and listen to the sounds of nature all around them. Then, Dong-il presents a gift to Hyo-jin. As she was showering up, Dong-il and Hee-won searched the entire forest and field around them for her gift — four leaf clovers. Aww, they want her to leave with their blessings and good luck. 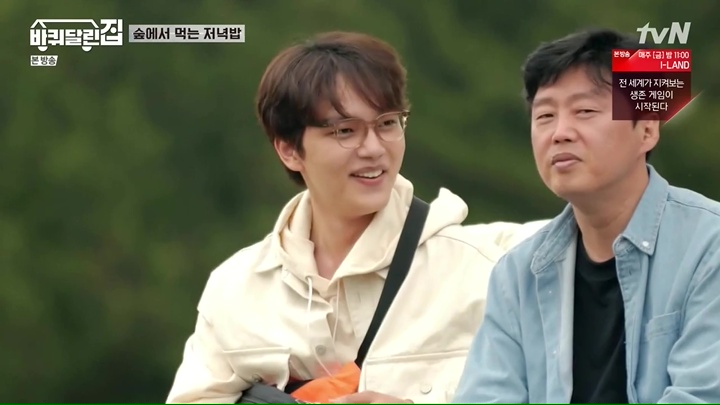 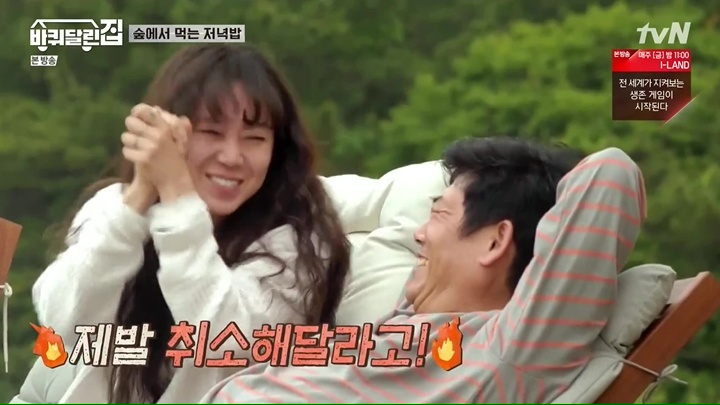 Hyo-jin carefully stores them between the pages of her book and shares her plan to turn them into bookmarks later. She also decides she has a wish — she wants to cancel her dinner menu request.

Originally she wanted to have braised beltfish, which is pretty labor intensive. It seems like Hyo-jin changed her mind thanks to the gift, but it turns out Hee-won begged her to cancel to spare himself the extra work. Haha!

Hee-won also says they shouldn’t cook more rice tonight, because it would mean food waste if they don’t finish it. Hyo-jin notes that she and Hee-won share similar personalities and taste in food. Dong-il gets suspicious, saying Hee-won and Hyo-jin aw awfully couple-y and Hee-won jokes that they’re not planning to go public yet so hush-hush! I love how they’re playing along with this. 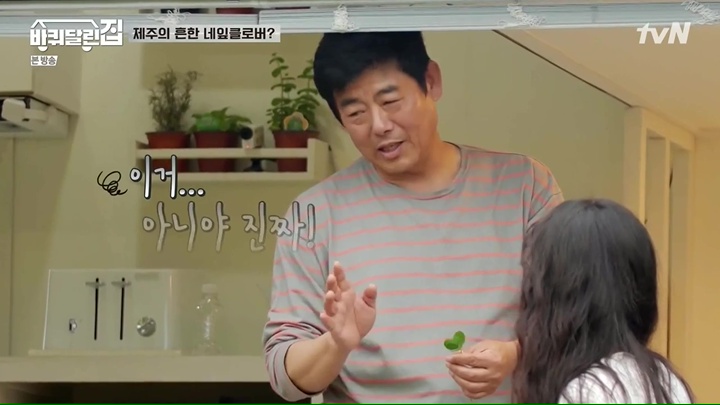 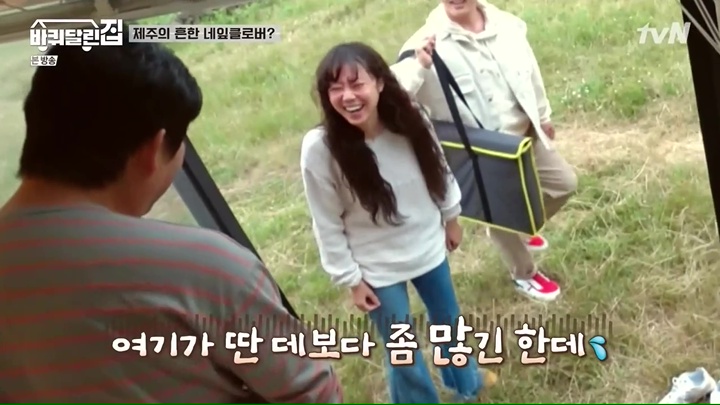 The two of them bust out laughing and while Dong-il insists they worked hard, Hee-won admits that they lucked out; there’s actually a big patch of four leaf clover right by the house.

To prove how hard they looked for her gift, Dong-il challenges Hyo-jin and Jin-gu to find a four leaf clover within ten minutes. 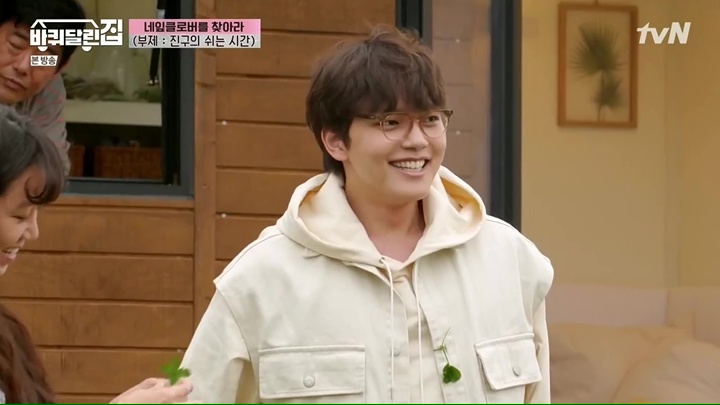 He’s actually playing right into Hyo-jin’s hands as she’s been plotting to buy some rest time. Just like when Mi-ran and Hyeri were cooking ramyun in secret, Operation Rest Time goes unnoticed by Dong-il and Hee-won.

Hyo-jin fills Jin-gu in on her plan and tells him not to bother looking. She basically needs him to not find anything so they can rest, and Dong-il needs him to do the same to prove the gift’s worth.

Her plot comes to an end prematurely when Jin-gu actually finds a four leaf clover (Dong-il yells at him to crush it lol). 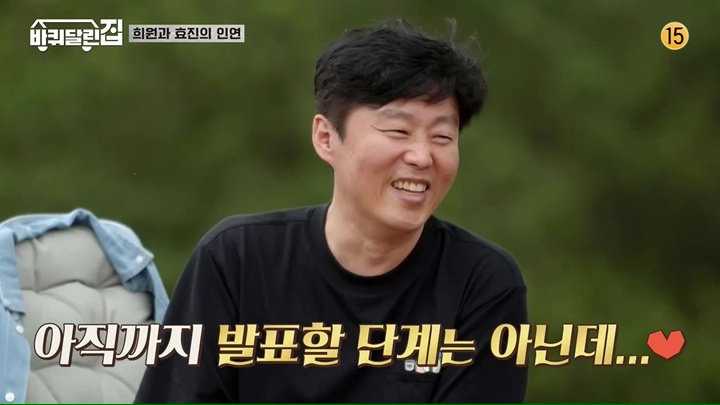 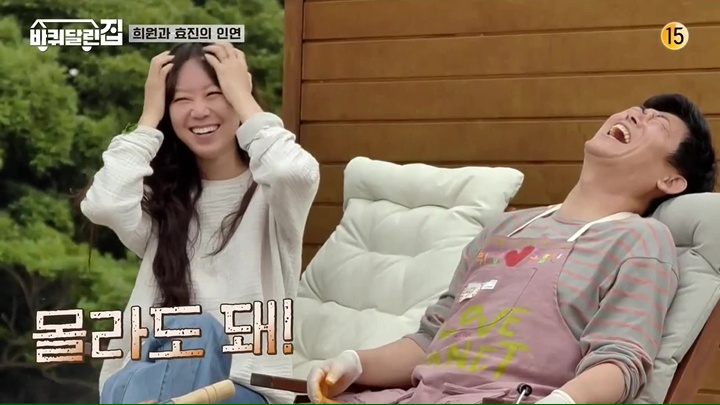 Tonight’s menu consists of black pork jjigae, sashimi, and conchs. They cook outside on the patio to free up more time to talk. Hyo-jin shares that she learnt a lot about Hee-won’s personality when Hee-won used to call to chat while they filmed Missing.

Dong-il asks why Hee-won would call Hyo-jin and Hee-won once again announces that they’re not ready to go public. Hyo-jin goes on to explain that, at the time, their movie filming wasn’t going as planned and it was causing stress, hence Hee-won’s phone calls to her.

The kimchi jjigae is boiling away and Hee-won reconsiders the amount of leftover rice they have, thinking there might not be enough. That’s how you know the stew is going to be delicious! Hyo-jin and Jin-gu head over to the house to bring out the rice. 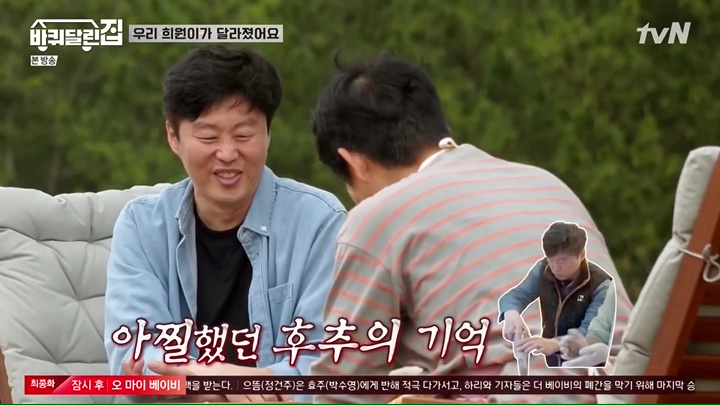 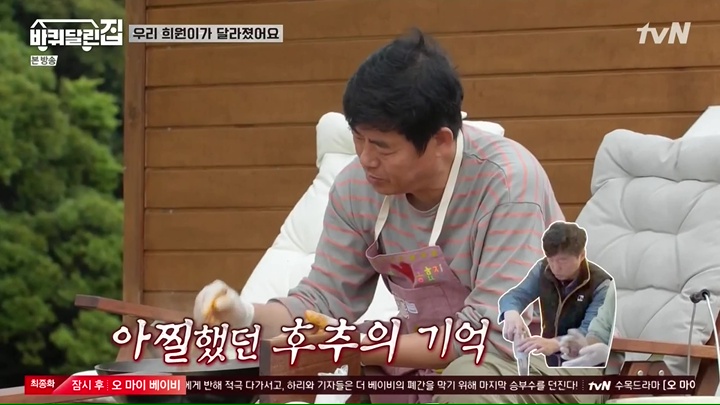 Hee-won points out to Dong-il that he’s improved, now being able to set-up the stove and gas burner. Hyo-jin also makes a bowl of sea urchin bibimbap and along with some sashimi, dinner is served.

No surprises, the kimchi jjigae is well-received. Dong-il shares his secret: extra meat and kimchi. Aw, and the camera highlights Dong-il’s habit of serving everyone first and always being the last one to start eating. 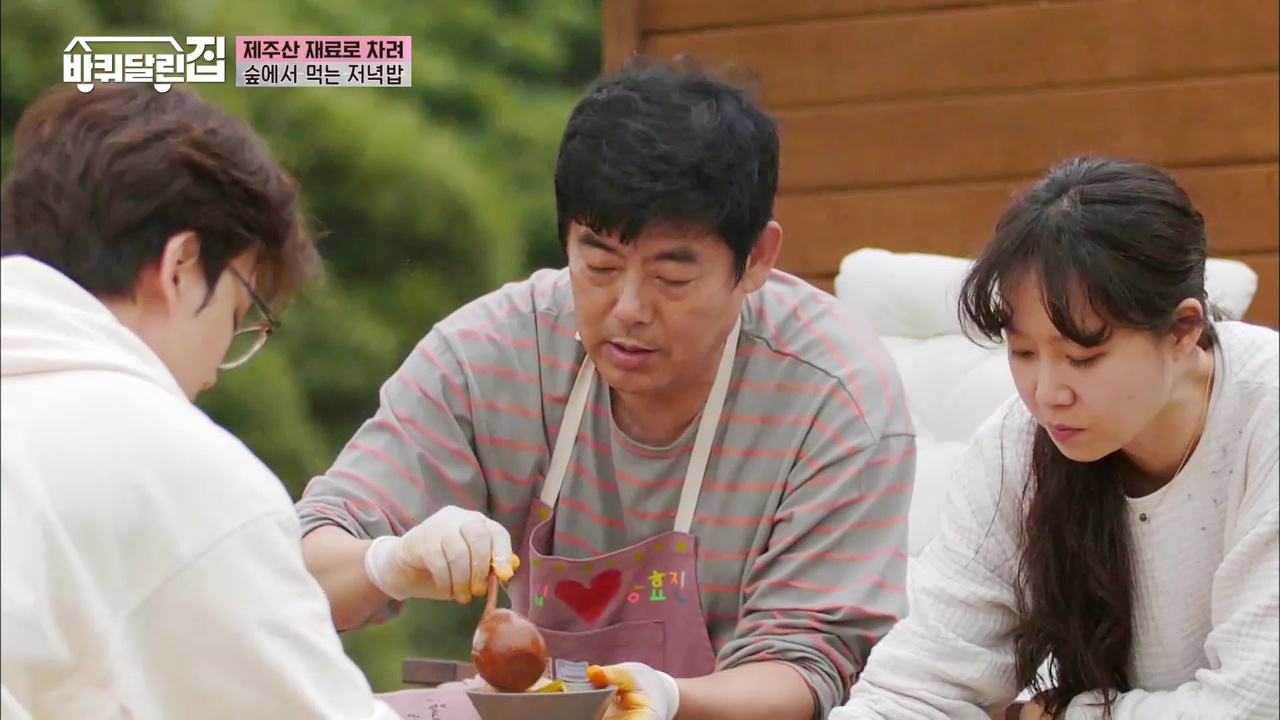 Dinner continues as the conchs are cooked. Jin-gu mixes the sea urchin bibimbap that Hyo-jin seasoned for everyone and to her relief, he says it’s seasoned perfectly.

Hyo-jin invites everyone to try the sashimi too. To Hee-won and Dong-il’s surprise, it pairs quite well with the pork. (At first, Dong-il thought sashimi and pork wouldn’t work together because they each have strong, distinctive flavors.)

We don’t get to see them finish dinner, but I am left with some serious food envy as the episode closes. Is it time for dinner yet? 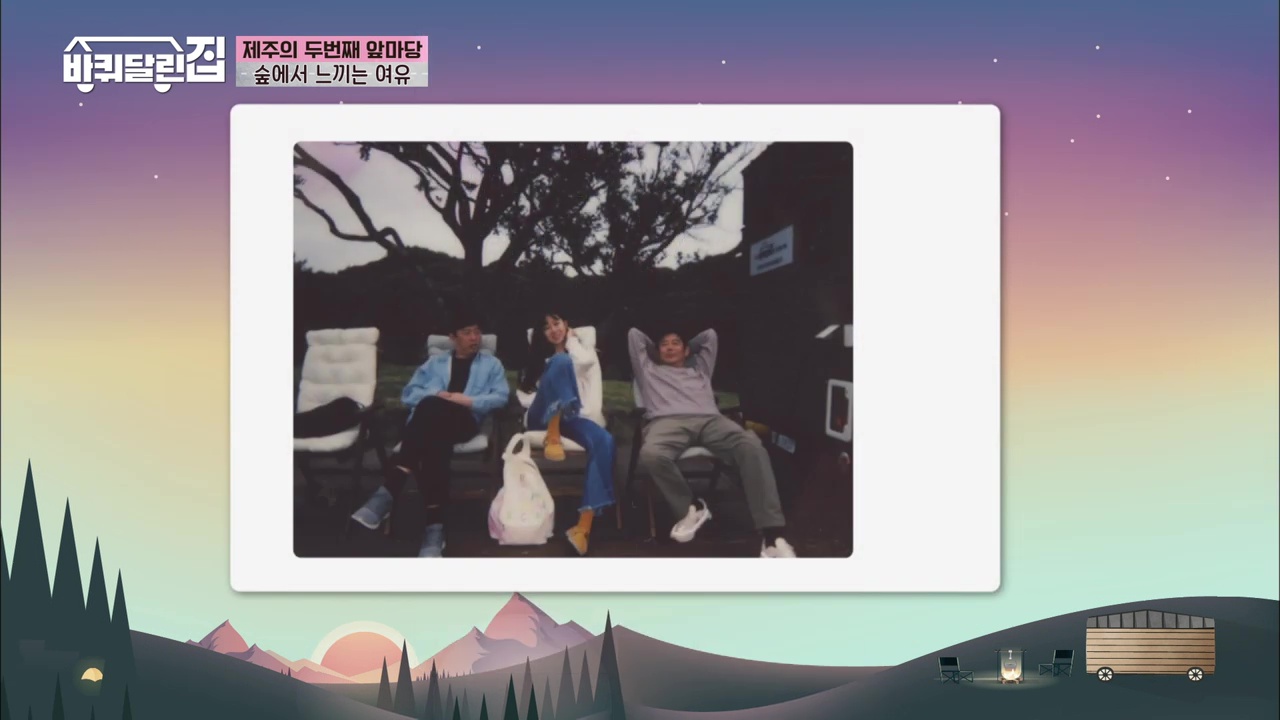 Oh my goodness, could Hyo-jin, Hee-won, Dong-il and Jin-gu, be any cuter? The way Kaycee describes the dish washing scene with all four of them pretending to be newlywed couples! And Hee-won stating they're not planning on going public yet so hush hush, was so funny. I could watch the four of them travel all over Korea for the next couple of weeks. Thank you Kaycee for your delightful recap of this precious show.

The newlywed neighbours skit and how every one go along with it is so cute!

It's awesome that they have an endless supply of four-leaf clover, isn't that unusual? People must be pretty lucky in Meochaewat... And the crew should really place the porch after Hee-won parked, not before, he looked dizzy from going too many rounds!

Am feeling the food envy bad too, everything looks so scrumptious. That flaky grilled fish just falling off from the bones... *gulp*

The cast was much more relaxed in this episode than the prior one. They were able to tease and kid each other more just like friends on a camping trip.

I like that the cameras are not intrusive. You get a real sense of the experience.

I still do not get why Hyo-jin thinks she has a scary reputation. She seems to warm up to people pretty quickly.

I don't know why but whenever I watch this show I feel full..like I ate too much or something because of food...lol. It should be a cookery show, everybody has its own talent for cooking...enjoying very much.