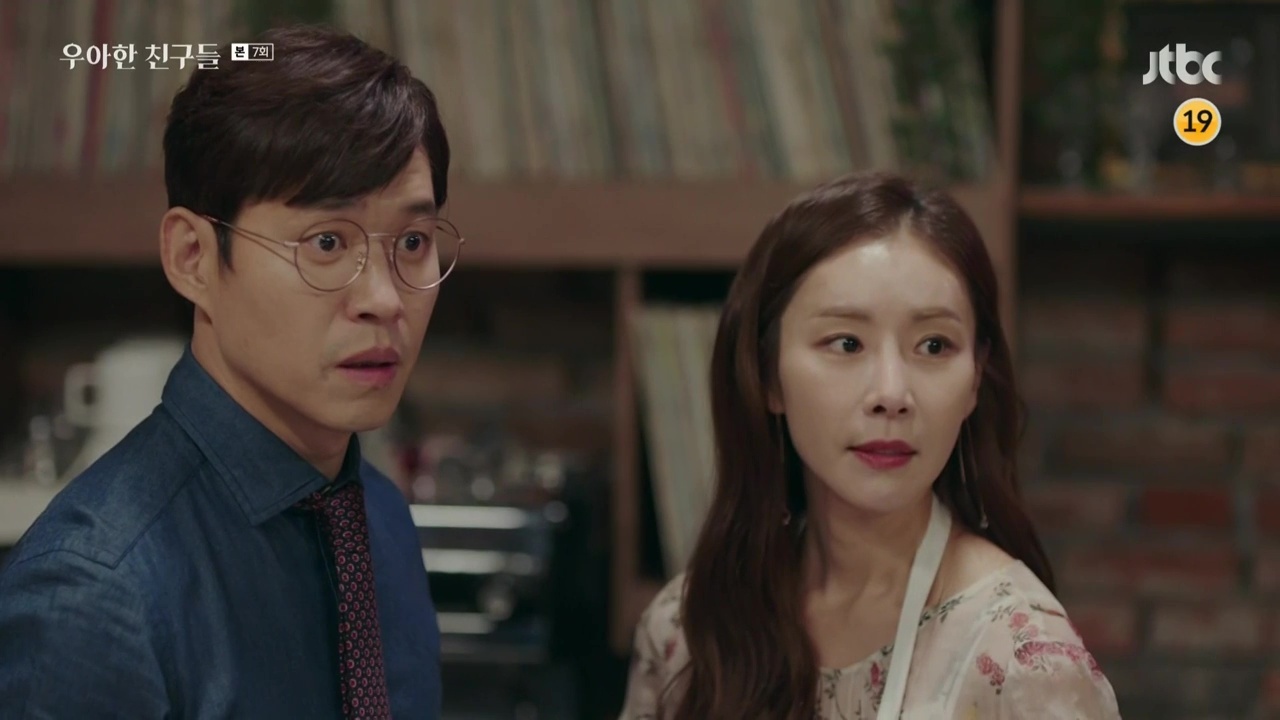 The worst of the terrible incident might be behind them, but this week our lead couple struggles with the aftermath of what they’ve been through. The murder investigation is ongoing in the background, and while that seems like a bit of a respite — it’s actually anything but. With the femme fatale returning, and a lot of hidden scars uncovered, we have quite the emotional set of episodes this week. 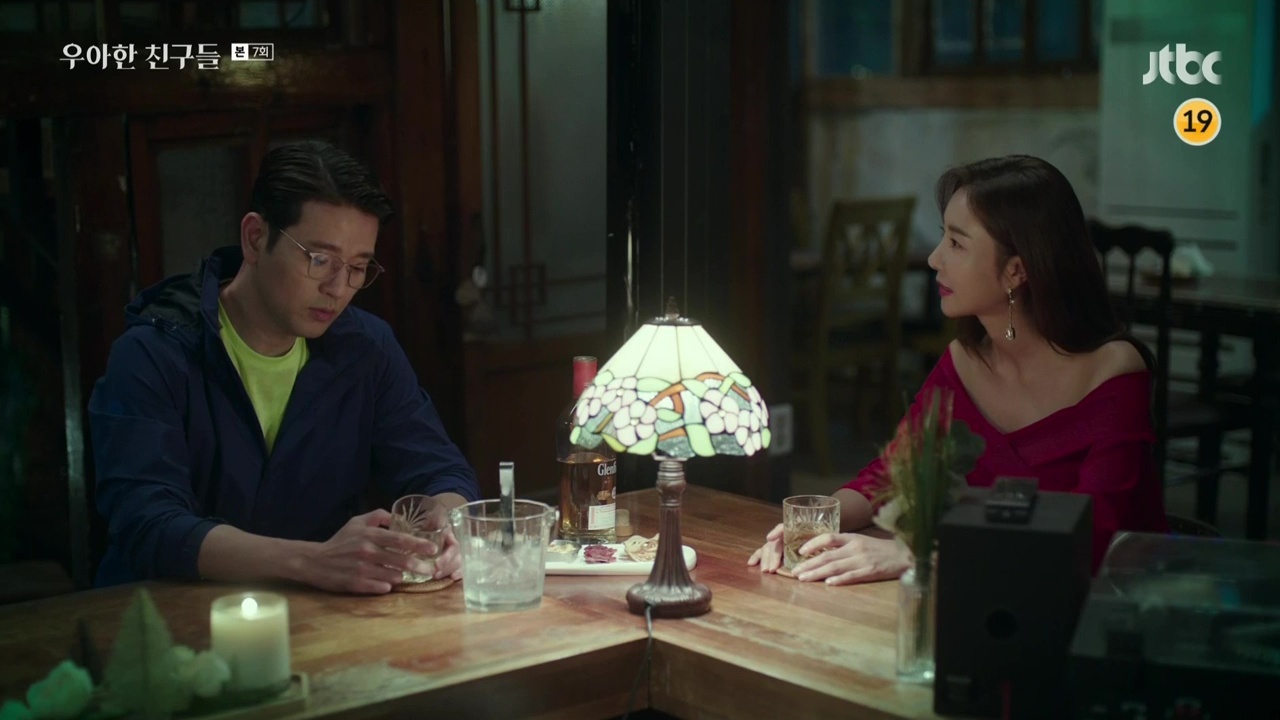 Hae-sook has taken over the neighborhood bar that our friends love so much, and it’s just about the worst thing you can imagine. Our ajusshis fawn over her, and she flatters them with compliments, but it’s Jae-hoon that goes back after everyone’s gone and asks her the question I’m dying to know, too: “What’s the real reason you’re back?”

In a week that’s pretty quiet (in terms of containing no murder, blackmail, or assault), this scene between Hae-sook and Jae-hoon is possibly the most troubling. Jae-hoon tells Hae-sook that something happened to Goong-chul and Jung-hae recently (that’s putting it mildly!), and that they’re “on edge.” That might be an understatement, because it looks more like underwater to me, but still, the point is that they are both emotionally fragile, and so is their marriage. Hae-sook says it’s a good opportunity for her and Jae-hoon. Whatttt. 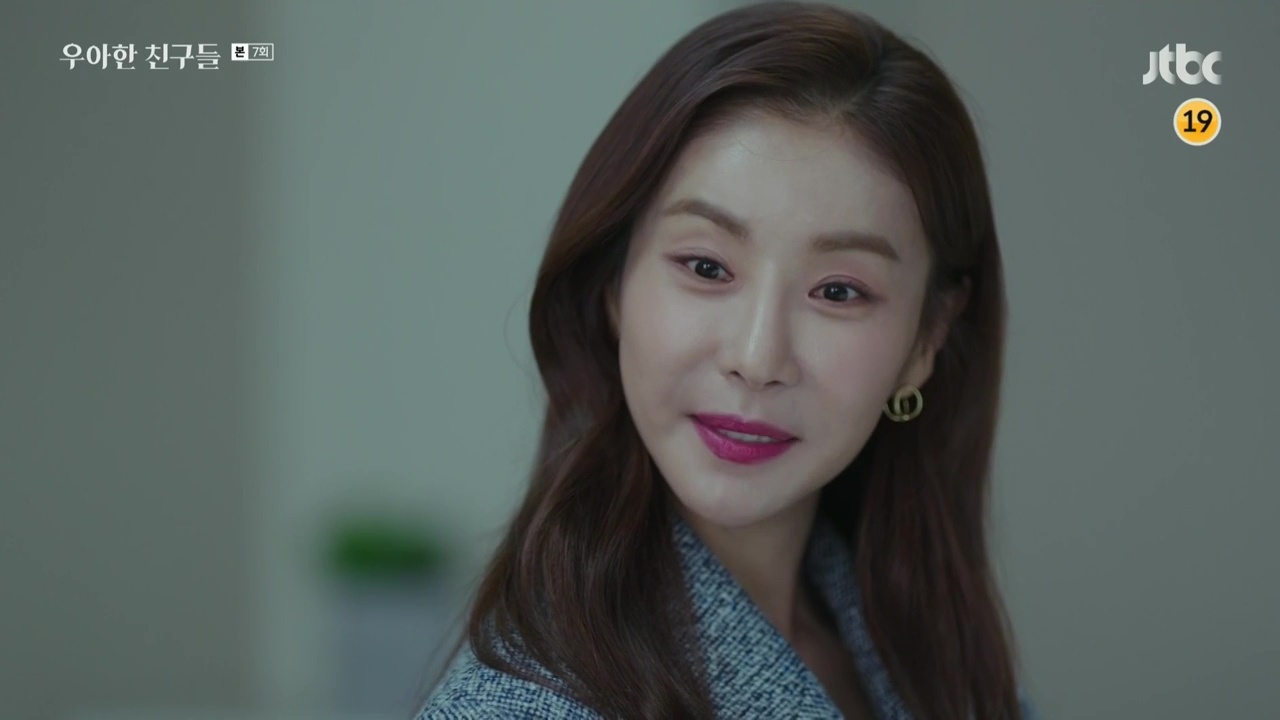 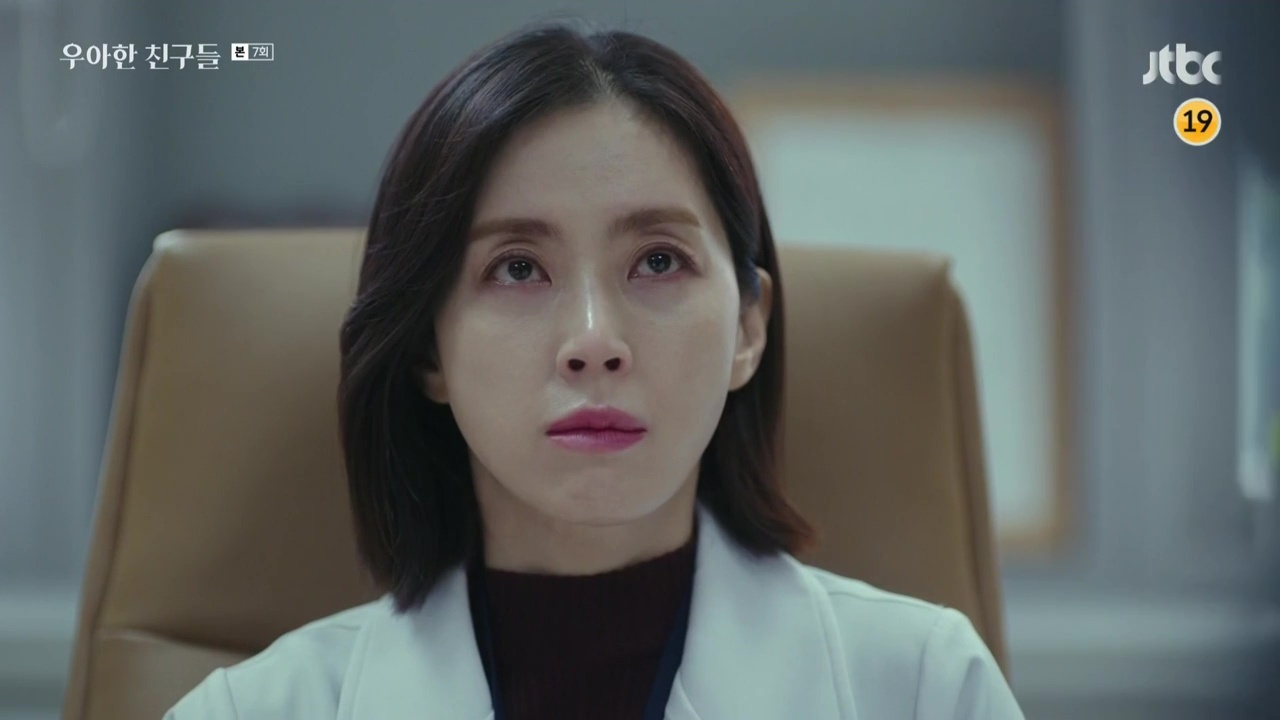 We learn this week that Hae-sook was more than the babe of the campus — she and Goong-chul were totally in love and he promised to marry her when his military service was over. Now it’s 15 years later, and I’m not sure why, but Hae-sook has decided to make her move. She tells Jae-hoon she’s returned “for the same reason that he lives nearby” and later, she visits Jung-hae at her office and all but says she’s going to steal her husband. We have seen how Hae-sook already has her claws into Goong-chul, and he’s totally unequipped to not be blindsided by her, but this whole turn of events also opens up Jung-hae’s story for us a lot.

We first met Jung-hae as a gorgeous competent doctor whose husband adored her. Then, we saw how that confidence crashed around her when Kang-san targeted and all but ruined her. Even though we saw her terrified and damaged, we see even deeper into her this week. It’s as if the wake of the trauma she’s endured has torn up all her old scars. 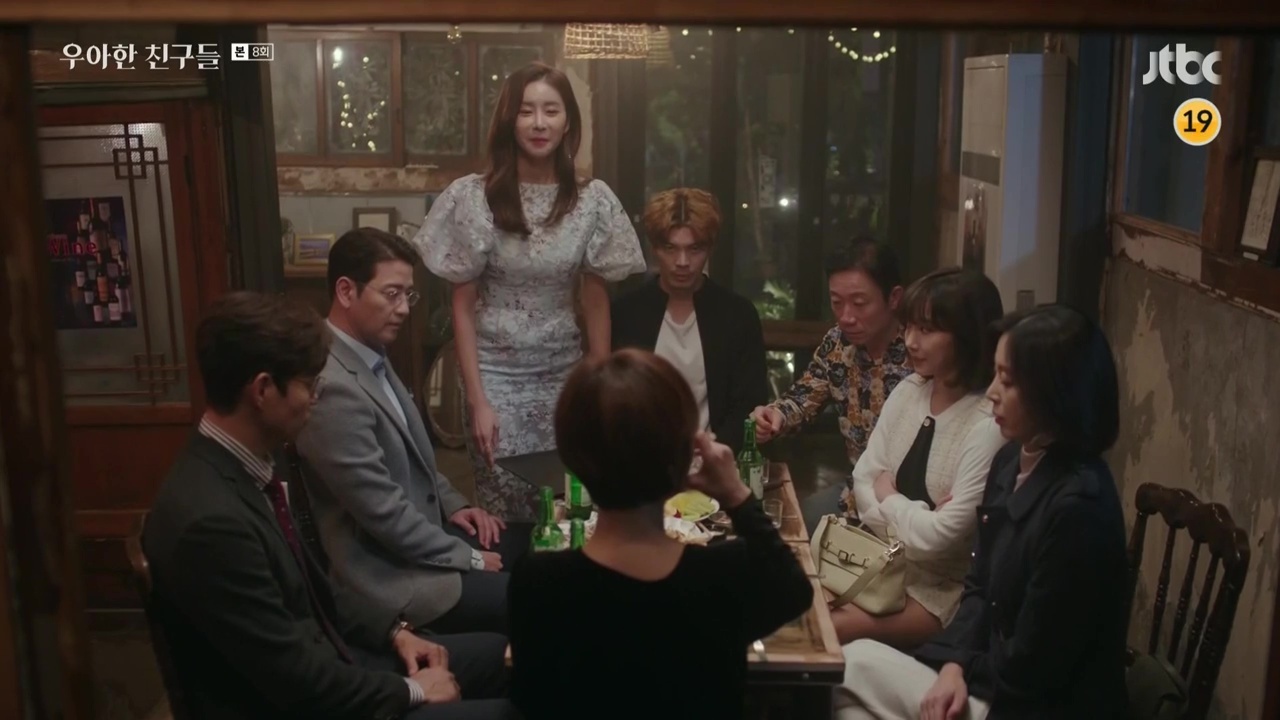 The Jung-hae we meet in the flashbacks is so different from the flirty Hae-sook that everyone is madly in love with. Jung-hae is more the wallflower, and we see her squirming and looking insecure around Hae-sook (it makes me love her, because I understand that reaction!). More than her discomfiture with Hae-sook, we also learn about Jung-hae’s parents. Her mother committed suicide, and after which, Jung-hae seems to have broken ties with her father. Current traumas wake up old traumas, and we see Jung-hae remember her mother and her terrible end. It’s also unfortunate timing, since it’s the anniversary of her mother’s death, and the wounds are all the more raw for her.

It’s not a great time to find out that your husband has financed the bar of his first love. Nor that your husband and all his friends have lied to their wives and are meeting up at said bar with gifts for Hae-sook on her opening night. Ugh.

You know, our wives just might be the graceful or elegant friends of this drama’s title — when they find out, they march over to the bar dressed to the nines to show their husbands that they know the truth. It’s a great bit of female solidarity, but it gets better when the three women leave for Kyung-ja’s bar and Jung-hae is finally able to do the grieving she so sorely needs to do. She’s comforted by Kyung-ja, who’s like this uncompromising and powerful character that also has the kindest most motherly heart ever. 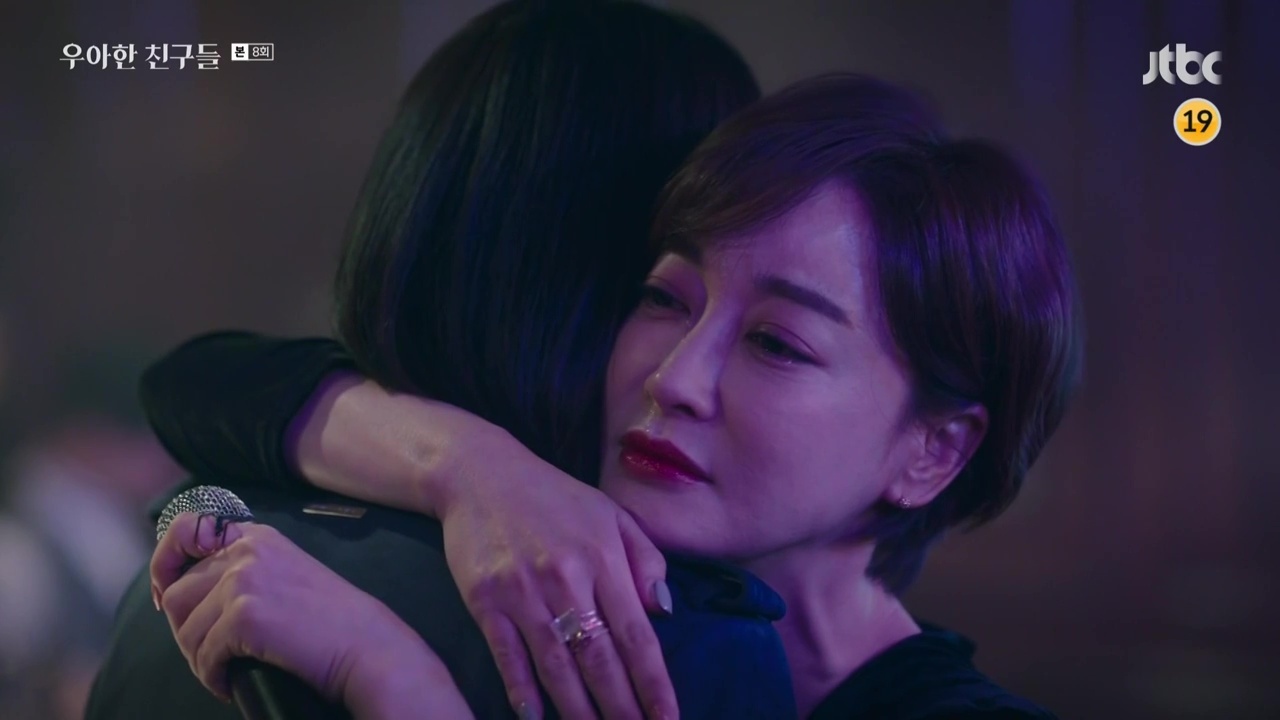 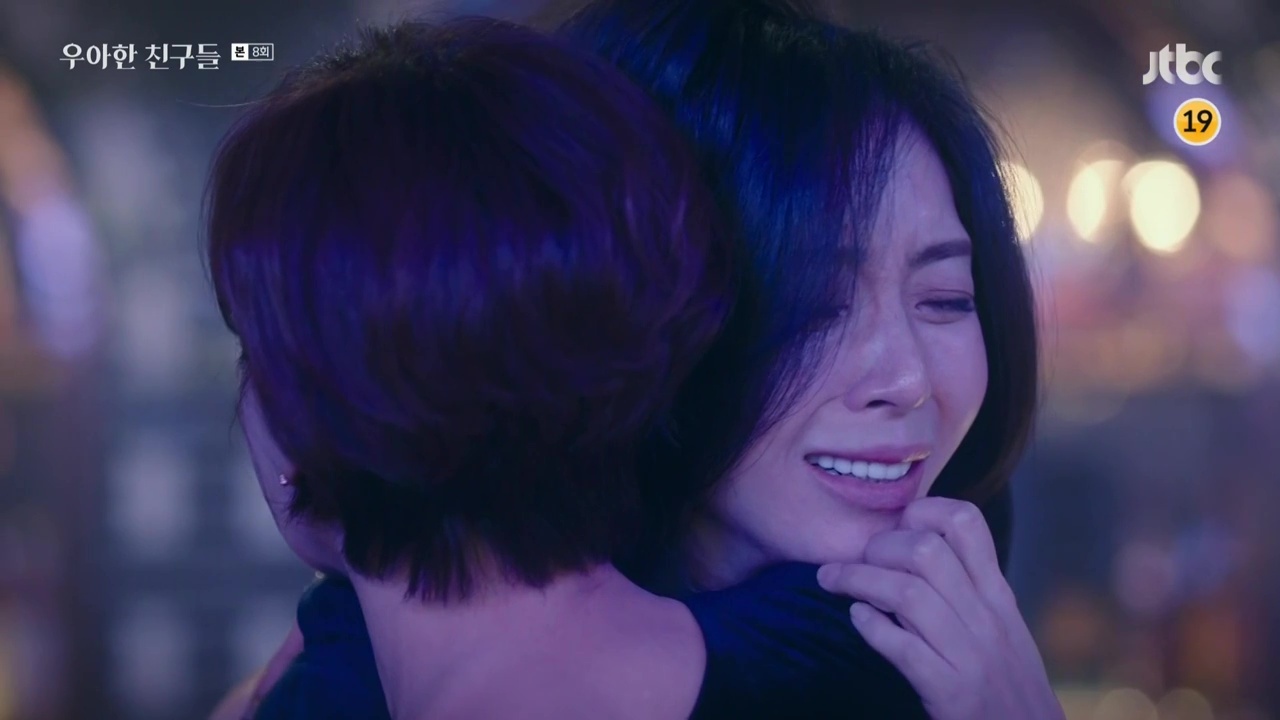 But what about our men? The story was squarely built for Jung-hae this week, as it’s really hard to side with Goong-chul, blinded by Hae-sook, and convinced that Jung-hae is hiding many a secret from him. But he also learns how upset Jung-hae is by the return of Hae-sook, and the two have a fight that actually leads to an important reveal: it was the photo of Hae-sook talking to Goong-chul at the funeral (back in Episode 2) that made Jung-hae go by herself to the bar for a drink… and meet the horrible Kang-san. I’m pretty convinced this is not a coincidence. Gulp.

In fact, not much feels like a coincidence in this drama right now. The more our plot lines are fleshed out, the more we realize that they’re quite interconnected, whether it’s in the past or the present. I really like the side stories of our other friends (and the adorable golfing son!), but it’s Jae-hoon that continues to intrigue and worry me the most. 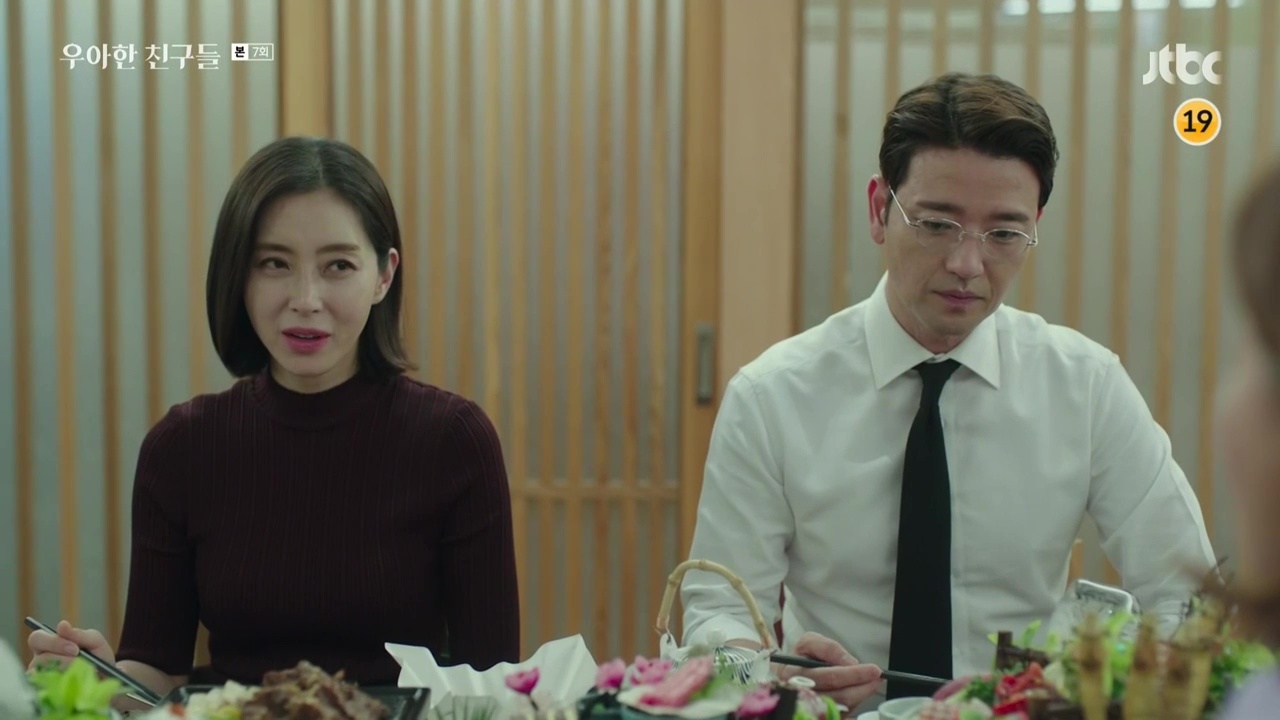 Whenever Jae-hoon is around Jung-hae, there’s this incredible sense of him holding himself back — you can feel it in the air. We know there’s something in the past between them, and Jung-hae mentions him hating her, but I don’t know… it doesn’t feel like hate to me. There’s also an interesting moment between them when Jae-hoon says that feelings either weaken or grow stronger with time, and that for him it’s the latter. We’ve seen him involved in the weird golf plot, he knows the anniversary of her mother’s death when her own husband doesn’t, and he’s also the first one to jump up when Jung-hae falls down drunk in the bar.

I’m only guesses at this point, but who knows what the truth will be? The tension in this drama is sky high, and what keeps impressing me is how this drama can be completely loud and shocking, and yet so subtle and poignant too. How do they do both so well? How can I watch more episodes and yet keep this drama from ending too soon? I’m not ready for it to be half over. 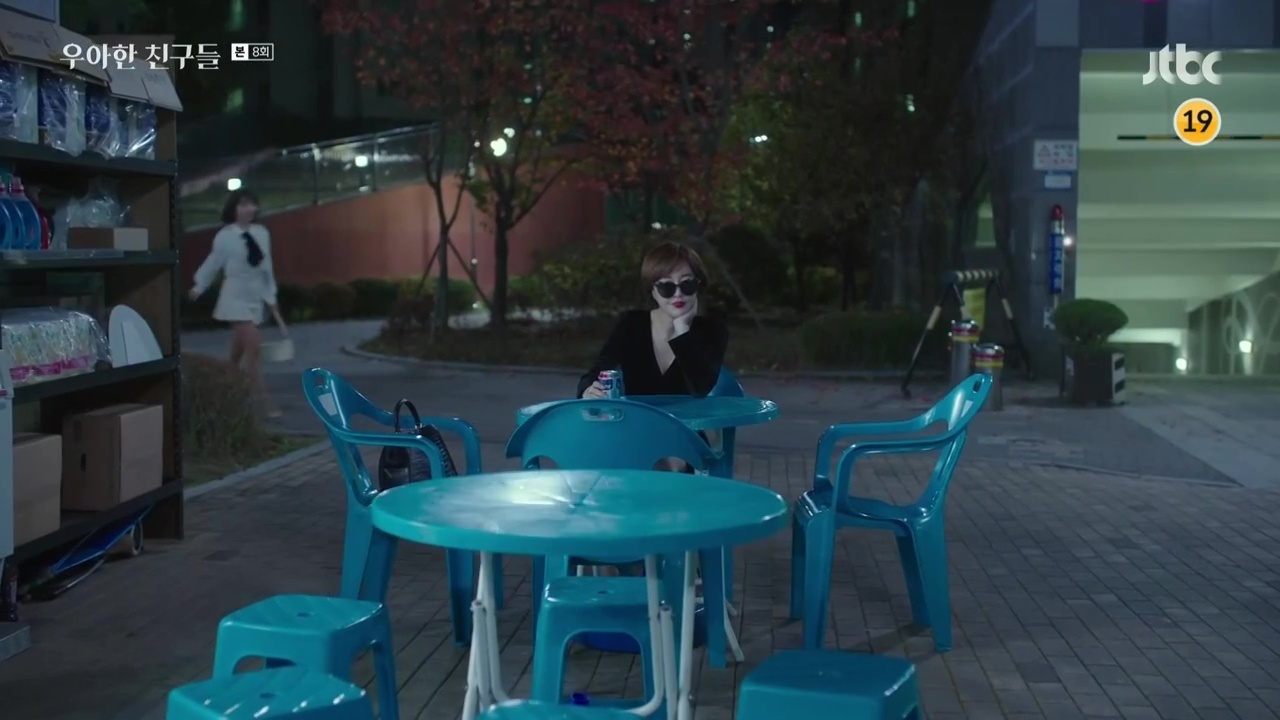 Tbh, i like this open thread type more. Cause we get to talk about the drama faster.. LOL.. I watch this drama because of the cast.. At first i was confused because of the tone. Sometimes it felt intriguing like sky castle or world of married couple. But it felt light too because of the comedy & everday-life scenes. But i like it because it suited the 30 - 40 something character (not like the wed-thu drama - sorry, but i still watch it tho). I will be patient to wait for the secrets and past to be reveal..

My favorite character is Ji-wook. His storyline with Mi-ra (Ae-ra) is unexpectedly heart-fluttering. I'm curious about Hyung-woo's work relationship with Ae-ra. Jae-hoon's ex-wife Sophia Choi Mo-ran is a hoot (and hot with her weight loss).

I loved this week's weecap. Thanks, @missvictrix. Nice episodes this week.

My favorite minor character that appeared on episode 7 (also in episode 2 and a previous episode) was unnamed Hong Pictures CEO, played by Kwon Hae-sung, who's recently appeared on Tvn's Oh My Baby. Meanwhile, back to my thought on unnamed Hong Pictures CEO, I knew that he's kinda act like a funny but handsome guy and in my mystery/theory, he was the first named Hong or not so no official character named with or without Hong yet until I'll find out if he's Hong or the other Hong from the another real-life actor.

It's super interesting that Goong-chul, after 15 years of marriage, doesn't know the date of his mother-in-law's death. Apparently, Goong-chul's wife never told him, and/or he never asked, and/or she doesn't hold a yearly death anniversary memorial. Yet his friend, Jae-hoon, does have this information.

And can we give three cheers to Kyung-ja? She just seems fierce and no nonsense. However, I hope that in an attempt to help her husband, she didn't make a misstep with that shady and perverted producer/director guy.

Of course I think there's many of us who think the guy at the computer wearing the grey shirt is Jae-hoon...but I'd love for the writer to give us a shock about the real identity of the big bad wolf lurking in their lives, messing them all up. The first two episodes had me on the fence about watching a possibly tiring trope that we've already seen in many 'fraught-tense-marriage-breakdown' dramas; however that murder, and those interconnected chains of events & people that are shackling all these couples together now, setting up each couple for disaster, is fresh. Really liking it.