New promos have been released for tvN’s fantasy drama Tale of the Nine Tailed (formerly Tale of Gumiho), featuring the lead actors in new character stills as well as a video teaser.

The story is centered around Lee Dong-wook (Hell Is Other People), who plays a male gumiho named Lee Yeon. In the past he had once been a guardian god of the Baekdu-daegan mountains. But now he travels between the mortal and spirit realms in order to hunt down troublesome spirits and enact judgment on them.

While lurking within the city of Seoul, though, Lee becomes targeted by Jo Boa (Forest), who plays PD Nam Ji-ah. As a producer of a TV reality show on urban legends, she has learned a lot about ghost stories and is now a pseudo expert herself. But as she chases a lead for her show’s next segment, she finds herself tailing Lee Dong-wook.

Kim Bum (Mrs Cop 2) takes on the role of Lee Dong-wook’s younger half-brother, Lee Rang. There’s not much known about his character except that Kim’s mother was human. So unlike Lee, Kim is half human.

The newly released teaser focuses on Lee Dong-wook’s character and starts with a shadowy shot of his feet along with an umbrella by his side. In a quick sequence, we see different spirits hiding in the city who Lee is about to find. Umbrella in hand, Lee Dong-wook walks upstairs and stops at a bookcase where he pulls out a book. Cutting to a closer shot of Lee facing the camera, he mysteriously asks, “Do you really want to see it? The world I live in?” There is a brief shot of Lee Dong-wook standing on the upper level of his library before quickly returning to Lee in close-up again. And the teaser comes to a close as the light passes over Lee’s face, revealing his true nature.

Written and directed by the team who created Children of a Lesser God, PD Kang Shin-hyo and writer Han Woo-ri, tvN’s upcoming Wednesday-Thursday drama Tale of the Nine Tailed is currently set to premiere on October 7 following Flower of Evil. 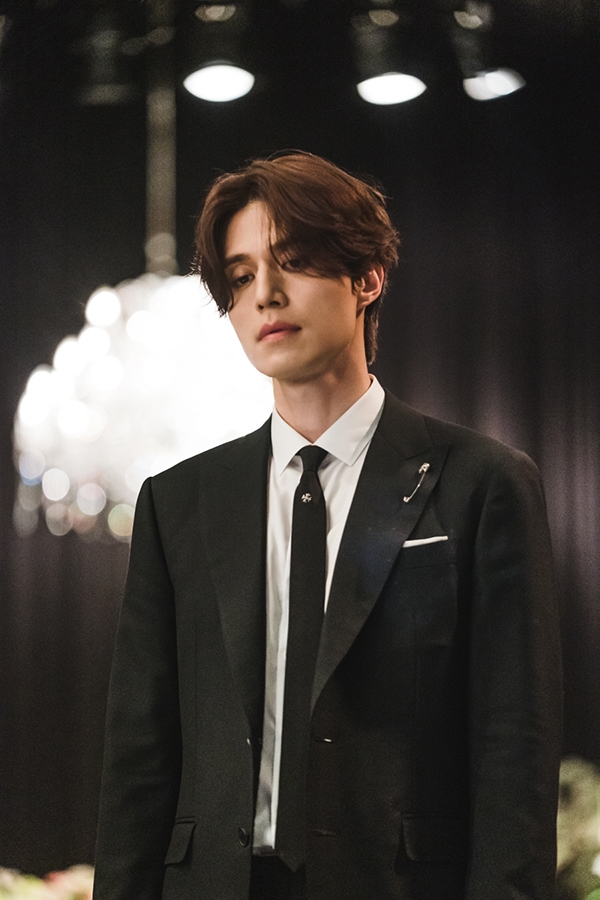 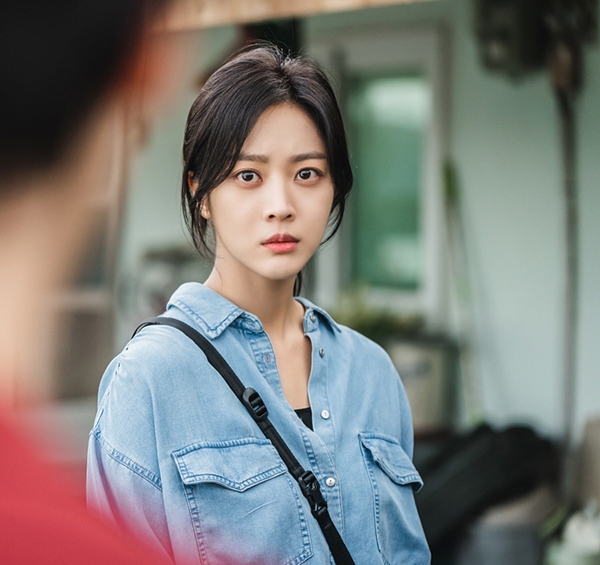 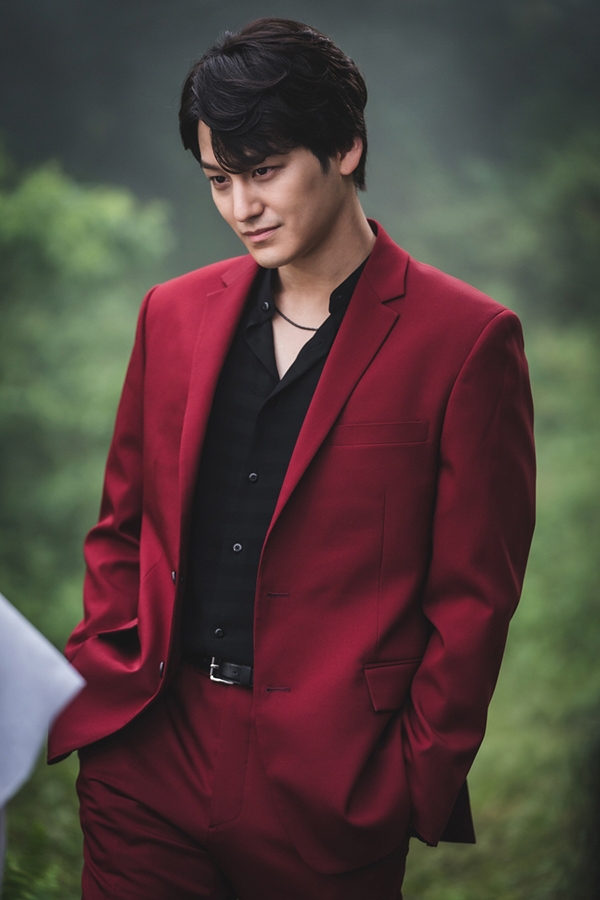 Kim Bum's makeup makes him look like a vampire instead of a half-gumiho.

I get that vibe too. Hopefully we get more info on his character soon.

OH well noticed!!! But I have waited so long for a drama (half-) starring Kim Beom that I don't mind hahahahaha :) hopefully it will be an interesting role. in fact I hope they all played interesting roles!!! :)

Me too, lol, I am watching this for Kim Bum, I have the biggest crush on him.

his red suit made me think the costume department has seen Inu Yasha......a half demon half human...with signature red kimono, now if his hair turns white.....hmmm... ;)

I like the dark-vibe.
Hopefully Netflix gets this drama.

The gumihos look dark and weary with the world. LDW looks gorgeous as usual. Kim Bum's look reminds me of Shin Se Gi in Kill Me, Heal Me.

i loved shin se gi in KMHM i hope his character is that edgy funny bad boy as well...!!!

Hopefully! That would be a nice contrast to serious-looking LDW.

I-I'm in love. I'm really excited to watch it haha I needed to see Lee Dongwook in another drama and this darkness is very warmly welcomed. Also, I haven't seen Kim Bum in anything since BOF so here's to hoping I can shake off that image of him when this airs XD

It would be My Girlfriend Is a Gumiho 2020 version.

So far I'm not getting the comedic vibe for it to be that, but I stopped trusting trailers, so who knows? *looking at you, Sweet Munchies*

This cast is everything. Thank you.

I loved seeing Kim Bum in Padam, Padam (2011) and in That Winter the Wind Blows (2013), and I've seen him in nothing since. While he was extraordinary in PP, IMO, after That Winter, he seemed to be in danger of being type cast. Seeing him in this new drama will be a treat.

Lee Dong-wook made such a strong impression in Hell is Other People. He said himself that it was hard to shake off the character. I hope that chilling character doesn't leak into his new gumiho character. He is so otherworldly anyway and he gets those roles: Grim Reaper, creepy non-existent serial killer, and now gumiho. I'm glad I've seen him as a romantic lead in Touch Your Heart. I have no criticism of the complex character he played in Life. He is a beauty to behold. He can do no wrong. Same with Kim Bum.

I hope Jo-Boa does better than she did in Forest.

How could Jo BoA NOT do better than in Forest?

LDW was great as a Grim Reaper and as a lawyer in the follow on rom-com. I think that this role suits him and the drama will air just in time for Halloween. I think that I will be watching this one.

I chuckled reading your first line comment, HA.
Even without watching Forest, but as a DB regular lurker, I could feel how fun it was for beanies to be in the recap alone, you guys know how to make a drama 10x more fun than only-watching it :D

So I scrolled down, and I saw Jo Boa's face, and I. Just. Froze. Everything came rushing back. The clams. The firehand. The tuning fork. The weird BL. And then I remembered @leetennant and V-Man. And then I had to tag her.

Those two firemen cuddling in the back of scenes was one of the more bizarre things I've seen in a drama - and that's saying something considering everything in the rest of this drama.

i am all in for this! gumihos,kim beom,lee dong wook bring it on!

I can get behind the team that did “Children of a Lesser God”, but I wonder who’s doing the make-up and styling??
Kim Bum’s make-up and black & red wardrobe is making him seem like he’s part of a campy vampire movie

Lee Dong-wook as another mythical creature is a definite yes, unleash that unearthly beauty to the max!

I really like the makeup and wardrobe and we know Lee Dong Wook can play a supernatural creature really well, so I'm super excited for this.

Hmm, I'm kinda cautiously curious about this one, after that teaser. From the stills it looked like pure camp, but the production value looks a lot higher in the teaser than expected. It's giving me Hotel del Luna vibes, which is never a bad thing.

But the lead also sounds like a male Jang Man-wol, which I'm not super thrilled about, as that type of character is so much more original and subversive when female. The Gumiho aspect aside, cold ruthless, seductive men are a dime a dozen in dramas so I hope, beneath the surface, there are aspects of his character that aren't purely tropey.

But the fearless director is pretty original territory for the female lead. The fact that she'll actively track him for professional purposes should be interesting. I hope, true to her job and character description, she's the authoritative type who isn't easily intimidated. It would be nice to see a dynamic where she keeps the male Gumiho on his toes.

One thing I'm really glad about is the fact that there seems (from some of the other promo shots I've seen) to be a secondary couple, with the brother and another woman, instead of a love triangle. In my opinion, love triangles are so overdone and overated. It so much more interesting when you can just have two love stories and leave it at that. And also love triangles involving siblings chasing after the same romantic interest are a no no for me. It might be less dramatic, but I prefer it that when a sibling likes someone, that person is brother/sister zoned for the other sibling by default. That way the the show can address more compelling issues in the sibling relationship. I don't know how close these brothers are, but I'm really glad the show seems to be sidestepping that issue. Of course, of I'm wrong then...oh well.

Anyway, it's an interesting concept, and I hope it's good watch!

Our Greek God playing a gumiho. I’m totally in.

I'm watching this!! Looks dark enough, I hope they follow through on that. Lee Dong-wook does any genre well though so if nothing else, I can count on him.

Why does Kim Bum remind me of Damon Salvatore? Maybe it's the suit or maybe its the smirk..

The smirk and the eyes.

And the crinkles in his eyes. As much as I love LDW (he's one of my favorite actors) I'm afraid that I might get an unhealthy dose of SLS.

Is it coming on Netflix?

I am not really a fan of Jo-Boa... I can't understand how she gets a pass and more drama offers when she is one of those actors that should be in the list as who cant act. I hope she improved. But I will pass this one even though I badly want to watch LDW's gorgeous face again on screen.

These I definitely have watch, can't wait