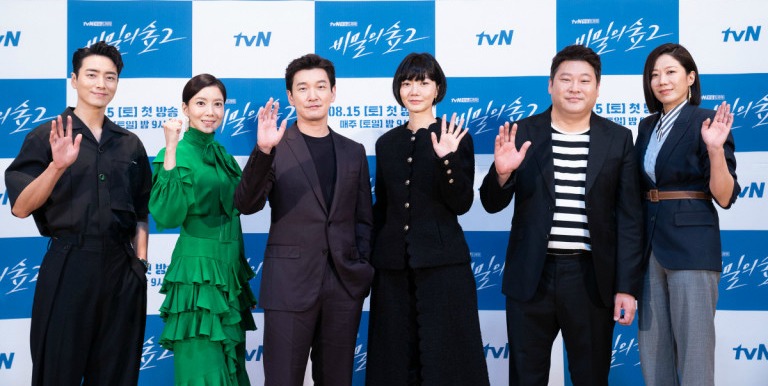 While many would argue that K-dramas were not made for seasons, every now and then there’s a drama that just begs for more after it’s over (or is that us begging for more?) Either way, tvN’s much-enjoyed crime thriller is back as Forest of Secrets 2, and it’s promising to be a 2.0 version of its former self. Our leading actors, Bae Doo-na and Jo Seung-woo, are reprising their roles of police officer and prosecutor respectively, and I know I’m not the only one expecting the drama to lead with the same strong, character-driven storytelling. While the drama carries the history and happenings from the previous season into Season 2, we also have a new setting and a new conflict in the shape of an internal conspiracy. So far what we have seen and heard from Forest of Secrets 2 looks like a second season done right, so who’s ready for the premiere this weekend?

Words can't describe how excited I am for the new season. I still remember when the first season finished and I really hoped for a season 2 but didn't think it would actually become true. My favourite duo is back! So excited to see HSM and HYJ work together again.

me neither @ s2 expectations.....like when it was announced i was just ojpfisaghouijgok

THREE YEARS. IT’S FINALLY HERE. MY HEART IS FULL OF HOPE. I AM READY. Forest of Secrets Season 1 was one of the most satisfying shows I’ve ever seen and I have full confidence in the cast & crew to deliver on all fronts once again.

Three years.. has it been that long? Omo!

begging to every god that three years means that's 3 yrs worth of solid ideas and script time. for all of them there's been new acting opportunities and they've participated in great shows, became even better at their jobs (they were already good at!) and the addition of these two actors issssss *____* bc theyre so good. also i didn't finish life but it shows the chemistry they have. really hope it packs a punch

Only other show/movie I am looking forward to as much is The Witch part II, and that won't be out until early 2021.

Ahhhhh I don't think I've been this excited for a show to air!! I'm ready to see another season of HSM and HYJ's friendship and them kicking butt while working together. The first season was done exceptionally well and I know it's bad to have expectations, but I don't think it's mentally or physically possible to not. Two more days!!

4 neener ~ Inside the Magic Shop ~

Excited doesn't even begin to cover what I feel for this upcoming drama. Bring it on, writer-nim. *bracing myself for a wild ride ahead*

Yes, it's finally here. Really looking forward to this :)

Three dramas are premiering this week, the one above, SF8 on MBC and Lonely enough to date on MBC every1!

SF8 was a weekly sci-fi short TV-movie anthology so it was released all eight via online already last month as the directors' cut.

Soooo excited to watch this!!! 🎉🎉🎉
New faces, new conspiracy, count me in!

I love that Yoon Se Ah wore an emrald green dress to contrast against the black. Not much a fan of the flounces / frills.

Consistent with Yongjae who prefers the same frilly clothes in S1

The dress got my attention from the very first moment I laid my eyes on the picture! How lovely the emerald green dress is.. I love frills!

I'm the last person to discuss fashion but I don't think my man Choi Moo-sung's look is helped by wearing horizontal stripes.
Also this is probably the only time we will see Lee Joon-hyuk (1984)'s waist once the drama begins and he is back in a suit. I wonder what his waist size is.
O/T The emerald green of Yoo Se-ah's dress is the color I would like for my next car. Unfortunately it seems in the US one can't order a car in that color green anymore.

Those large stripes reminds me of prison clothes. Are they giving hints to his show character? Probably just overthinking it. Other than that don't mind it as much.

You may be on to something but perhaps it’s a reference to PRISON PLAYBOOK. Then again I don’t think I can recall seeing someone incarcerated in a kdrama wearing stripes.

I actually completed seeing again Season 1 so I can have continuity... It always makes my heart race... Bgm is very good in every episode... I am biting my nails... Waiting for Saturday

So so happy we get second season. I think Secret Forest team (writer, casts, production) were all under a lot of pressure to deliver again. Even though they said season 2 is made possible due to the love of its fans, the fact that most people from season 1 including supporting roles had made effort to appear together again clearly show how much they love to be part of this project. I do hope it is another well-made, well received drama so that we can get beyond season 2 😁 Main actors CHoseungwoo, Bae Doona and Lee Joonhyuk have shown interest in going multiple seasons. Please make it happen! 🙏🤞

Lee Joon-hyuk rocks in the picture! Even I was a big fan of both leads, having watched LYH in A Poem A Day made me so desperately wanna watch this one.

CSW would be happy to go till season 5!

tbh it's good that it took 3 years

SO EXCITED! This is one of the BEST Kdramas ever made. It really is. Everything about the first season oozed high quality: acting, writing, directing, editing, production quality. It's just as good as it gets. I am ecstatic they could bring this stellar cast back for more!

Just finished rewatching S1 - the second time round doesn't make it less compelling. The ferocity and intensity is breathtaking. Knowing the full story in advance does give you fresh perspectives that otherwise won't be possible in the first watch.

This together with My Adjusshi are truly two masterpieces in recent times.

i have seen the show probably like 8 times by now and every time i learn sth new.

i will simply perish

i believe in it! i think 3 years really helps aleve the pressure and growth. kinda reminds me of how after 13 years from a stellar debut 'moonlight' came out and knocked people off their feet and then 'if beale st could talk' and they're two different tones and movies but ultimately some of the best films i've seen. it's good to have faith in people because this is their JOB (or "job") as artists and whatever comes along i believe in. a lot has been happening in 3 years as well so i can't imagine it not being incredibly socially relevant (particularly when it comes to violence against gender and sexual minorities.) this is one of my favorite shows ever (kdrama or no) so...and when i heard about jeon hye jin and choi moo sung a bitch (me) went crazy LOL

One of the very few new shows I am totally looking forward to. Now we will need a season 3...

Secretly hoping for season 3 😁 a lot riding on the success of this season. 🙏🙏🙏

Saturday can't come sooner!! I am so gonna watch this live.

I. cannot. wait!!!!! Been counting down the hours for the new season. Thank God for simultaneous Netflix streaming

1st episode rating 7.627. Not sure if that counts only Korea TV viewers or not.

I finished my rewatch of S1 on Thursday. I can't wait the hourss until I can watch this today!!!!
Dramagods, please be good!!!

The first episode was a bit slow.. but thinking about it, it set the perfect tone. I went back and watched it again, was tired the 1st time and see that I missed a few details. (if this is anything like season 1, the details matter).

certainly didn't disappoint. Can't predict where the plot will go with this one

I watched the first two episodes and I'm happy with what I've been shown so far. Everything screams high quality production and I couldn't skip any minutes. I'm excited for the upcoming weeks!

I love it. I love it to bits, and I need moooooooooore

This was supposed to stream on Netflix on Aug. 15, but only season 1 came on. What legal site streams this in the US? Getting so disappointed that many dramas are not on the Big 3.

It is on Netflix in the US. Season 1 has been on there for years... The season 2 eps have been put up right after they air in Korea.

OMG I forgot that at times Netflix puts both seasons under one title...Thank You!!!

This is one of the first kdramas that I watched which then got me hooked. This is also one of the only 5 shows that my husband watched with me, so really looking forward to having some time together watching just one show.