A young woman from a family of professional con artists becomes the best in her field and lives a dangerous life while trying to avenge the wrongs done to her family. While she's planning an operation to expose her nemesis, she meets a man who may or may not be who he claims.

A young woman from a family of professional con artists becomes the best in her field and lives a dangerous life while trying to avenge the wrongs done to her family. While she's planning an operation to expose her nemesis, she meets a man who may or may not be who he claims.

In a world where people make their personal lives public through social media, what you see is not always the truth. Lives or identities can be stolen or fabricated, and catfishing is widespread. Capitalizing on these current trends, the drama brings together a group of con artists who pull out their best tools and tricks for their biggest job yet. The goal being to successfully con the South Korean government and reveal the hidden affairs of the state to the public.

In this story, Seohyun plays the role of Cha Joo-eun. As a con artist, she enjoys making/wearing disguises and she specializes in identity fraud. Burying away her real life and name, she constructs fictional depictions of herself and uses multiple aliases. Having been born to parents who are both swindlers themselves, she learned the tools of the trade by watching her parents from a young age and is highly confident in her skills.

Go Kyung-pyo plays Lee Jung-hwan, who works as a team manager in a large business conglomerate. Although he looks like a typical employee in appearance, he is a mysterious character and is hiding his true reasons for coming to work at the company.

Kim Hyo-jin plays an infamous con artist named Jung Bok-gi, who is considered to be upper class in the world of scammers. Elegant, sharply-tongued, and charismatic, she’s always calm as steel when on the job. Her partner in crime is Kim Young-min, who takes on the part of Kim Jae-wook. He’s described as an homme fatale character and is highly ambitious.

The newly released teaser introduces the drama’s characters and it starts with Seohyun looking up at herself in a mirror. She explains, “I fabricate my personal life in order to be happy like this,” and we briefly see her wearing a wedding dress. Returning back to scenes from her reality, the actress’ name, Seohyun, appears on screen. The next name that appears is, Go Kyung-pyo, who runs up from behind Seohyun to take refuge under her umbrella in the rain. Following him is the name, Kim Hyo-jin, who walks down a hallway dressed in tall stiletto heels. And we see the name, Kim Young-min, quickly afterwards, who takes off his sunglasses with a steely gaze. The next name we see is supporting actor, Tae Won-seok (Nobody Knows). He asks someone off-screen, “Have you ever eaten $10,000 kimchi stew? It’s amazing.”

It cuts to a text screen laid over a scene where Go Kyung-pyo kisses a girl in the background. The text reads, “The world of con artists, where people deceive others and are deceived themselves.” In a sequence, we see Seohyun performing a bank job. All the while Kim Hyo-jin takes a sip of wine and drawls, “It’s cute, they’re trying to learn how the world runs.” A text screen is laid over the scene, which reads: “No one can be trusted.” Cutting back to Seohyun, the teaser comes to an end as she says with a knowing smile, “I want to be a good girl.”

Written by Yoo Sung-yeol (Heartless City) and directed by PD Nam Gun (Temperature of Love), JTBC’s Private Life will be premiering September 16 following Was it Love. 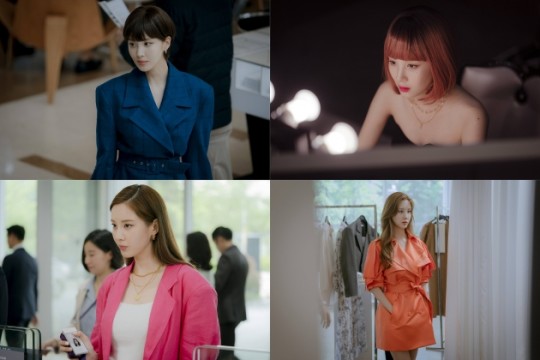 I'm more excited for this than I thought I would be, primarily for GKP and KYM. I haven't seen many of Seohyun's or KHJ's works, so I'm not sure what to expect from them. But, it definitely seems like it'll be a fun one.

This looks like it’s going to be a good time! The cast looks great too. I’m looking forward to seeing Seohyun in the lead role. After watching Hello Dracula, I thought it was crazy that she wasn’t the SNSD member that got an acting career push back in the day.

Oooh, how is Hello Dracula? I've had it downloaded for months but have yet to press play.

I thought it was good, though I might be biased. Anna/Seohyun’s storyline was a little too relatable at times lol. But yeah, I liked it. There were parts that genuinely moved me and it ends on a hopeful note. Also Seohyun really does do a phenomenal job with the role.

this can go one of two ways. fun and criminals messing with criminals lives (c*pit*lism) or just....not that. lol. i have a hard time understanding the base of the story and the trailer doesn't give much (it's super short though) but expose ha!

I like GKP but I'm reserving judgment on Seohyun.

Im so excited for this show for many reasons. It has the heartless city writer, it’s go kyung pyo’s military comeback drama, the main pairing is gorgeous and have chemistry based on their offscreen interactions, and it’s Seohyun’s first full length drama since Time. I’m really proud of her growth in acting since scarlet heart and see potential in her ability to show different sides to her acting and this is the perfect show for it. So excited!!

I'm excited for this show that how con artists will scammed everything. I hope they are all four alive by the end of this thriller drama.

Go Kyung-pyo~~!!! And Kim Young-min not playing a cheater, oh well, he is still in another department.

My first kdrama was I Am Happy with Kim Hyojin! So I've loved her even before she became Mrs Yoo Jitae. Really looking forward to seeing her this.

Glad to see some complimentary posts here about the female lead's acting, because I've only seen her in Scarlet Heart and she was not good.

Kim youngmin sure has a knack for picking drama. His consecutive strike from my ajussi, crash landing on you then world of the married. How come he involved in all those hit drama

wow 👏 seohyun looks like a legit actress now! loved her transformation ❤ excited to watch this