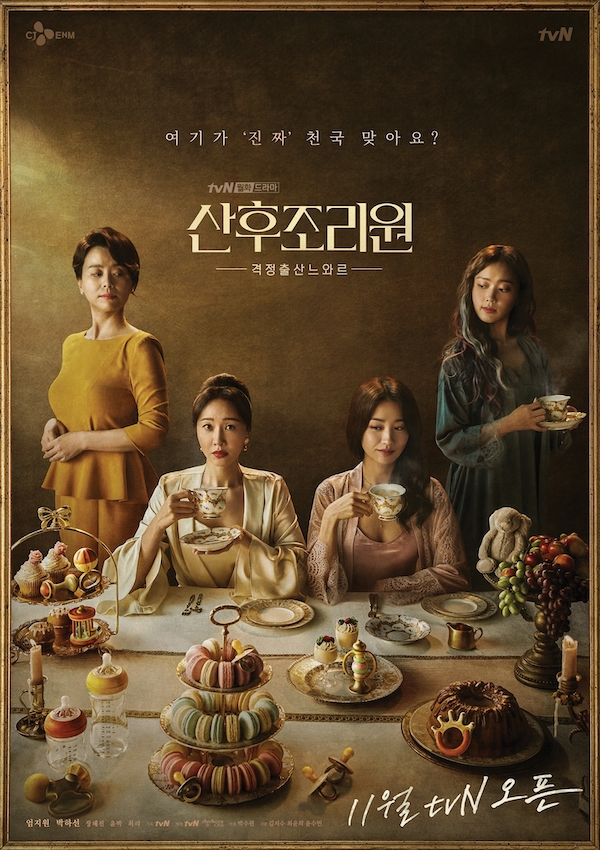 In noir drama Birthcare Center, Eom Ji-won plays the main character who manages to rise in her company to become its youngest board member ever. Although she’s the youngest at work, she’s the oldest woman at the birthcare center.

Birthcare centers are a big thing in Korea, and it’s common for women and their babies to go straight from the hospital to a birthcare center. It’s sort of a maternity ward and hotel in one, with nurses and staff taking care of babies and mothers’ needs. (Length of stay and luxuriousness vary depending on the amount families are able to part with.)

In the poster above, Eom Ji-won enjoys a lavish tea party that’s also littered with a variety of baby toys. Park Ha-sun, Choi Ri and Jang Hye-jin stare at Eom Ji-won from the corner of their eyes, almost smirking sinisterly at her clueless state. The copy reads: “Is this really heaven?”

At the top of the birthcare center’s social hierarchy, we have Park Ha-sun playing the queen bee. Then, there’s Choi Ri playing a twentysomething pregnant woman. Finally, Jang Hye-jin rounds out the main cast, playing the director of the postpartum care center. It’ll be interesting to see how these characters form relationships within the microcosm of the postpartum care center, given their different backgrounds.

The teaser begins with dramatic music highlighting the same scene as the poster. Then, it transitions into a tour of the luxurious birthcare facilities. From indoor gardens to fancy brunch rooms to high-tech glass nurseries, the birthcare center looks like something out of a Tiffany and Co. home decor catalogue. Text flashes on the screen inviting viewers: “You have entered the world of birthcare.” As she enters the room, a knock and Jang Hye-jin’s voice can be heard: “Madam?”

I'm really excited for this, I hope it is good.

Wow, this is very different from what I was expecting from the title alone. Sounds interesting, none the less!

I was expecting a completely different show from the title too.
I was thinking like a British show Call the Midwife (on Netflix) type thing...

Is this kind of drama a recent trend since Sky Castle was such a big hit?
A drama about people with the highest levels of wealth and social status...
Upcoming drama The Penthouse on SBS is like that too.

Not really a new trend but SC definitely made it trendier. Return in 2017 was about rich dudes getting away with anything because of their status and wealth, fyi Penthouse was directed by Return PD, even the statue in the teaser was in Return too (it's from a greek myth).

Anyways...I suppose viewers (me included) like to watch rich people in dramas as they dress more fancy, have beautiful houses, and can basicly do anything they want because they are rich. It's an escape from reality. Hahahahaha

Lol, this premise says SO much about modern South Korea: emphasis on motherhood and family illustrated by creation of birth centers in the first place, monetize the sh*t out of the system, and then a sinister drama with a backdrop of a clique-y hierarchy is subsequently produced for entertainment.

i don't know much about birth centers and esp not one in SK but in theory if i just think about it nebulously it's a great idea. however, the emphasis on motherhood surely is a problem and the idea of the center is for? what? bonding? why only a mother? what about adoptees? why not family centers? and how much care and support depending on status matters (a lot, i know this.)

i think satire is affective if it is satire but the contrasts need to be more evident. a huge issue with sky castle is that it focuses on the consequences of the families sxistence within their community instead of the outside world. so it' slike very insular commentary with no consequence.

hierarchy is inherent to these places (and ofc encouraged and esp where women would congregate) and although mainstream media can fail with realizing its potential outside of capital things can still be said. people learn through what they see. it just depends on what they want to say and how they want to see it.

I was expecting more a slice of life drama than a dark social drama...

I'm already scared for the futur of these babies.

the premise makes me excited though i wonder about execution.

also in terms of birth care centers the ratio of women who can go to "good" ones v. how much they help if a mother is a worker and the decline of birth rates (for multiple reasons up to and including racism) would be an interesting factor to explore. we don't have them here (US) afaik and our healthcare sucks as everyone knows but knowing the class disparities worldwide and how unsupportive governments are towards working mothers and the idea of paternity leave.....i wonder if it will go where it needs to go.

Such a themed show is interesting in light of the fact that Korea has one of the lowest birth rates in the world, and also one of the highest emigration rates.

google multiculturalism and birthrates for SK and you'll see why that dichotomy exists. fascinating isnt it!

Jeez, korea is a playground for the rich

hm, interesting. This was originally gonna air in August, but read there was some huge rewriting on the scrip. So this really make me a wonder how this gonna affect the final product.

Wow! This is a really interesting premise. I didn't know about birth centers before, but it seems like a rich backdrop for dark social commentary. This makes me curious and wants to look into why and how these birth centers came to be since we don't have them here in the US (that I know of?). Also, we always need more female-centric dramas!!

considering we have the "best medical system" yet have the highest natal death for women, particularly black ones, lots of people don't live long enough to even get there :')

all that aside i have the same questions as you. i am kinda guessing it's cos of how small it is but also valuing a mother's life in its own way? but i don't know bc it also reinforces the mom as a nucleus type thing. it could also be to encourage reproduction in general. i should google this.....................brb

Going by the drama this is something available only to the top 2% or so.

so there's hospital run ones and independent ones. guess which is better. it certainly should be built in everywhere with a focus on like....quality of life for the family and child. and they talk about the smaller builds of korean women which is interesting but ultimately the answer? capitalism. :)

that's an interesting read. First, I agreed - race factors in so much to the healthcare quality in the states (probs elsewhere) and all the baggage that comes with that. Second, Idk what SK's maternity leave policy is like but in the states, it varies but generally is shitty so you have a kid? great but good luck recovering and settling in as a parent and keep your job~ bye~ Capitalism is ultimately the answer/motivation, but there's a need that these centers are fulfilling and I think that's great. The way these centers evolved and operate now really makes a great backdrop for an interesting social commentary drama.

Wow, as what I saw on this teaser, I loved this beautiful place. Also in this teaser, I saw a similar costumes with different movements as what we seen from the poster above in this post. It's really one of the rare type where both-same-costumes-on-poster-and-teaser had knew it.

not gonna lie but this has sky castle vibe.. looks like black comedy

Hey @katakwasabi, do you think the pregnant lady from THE KING: ETERNAL MONARCH was hanging out at one of these places?

She probably did! Before she was transported to Korea and then back to Corea...only to crash a car. Did she even deliver her baby at the end? Huhuhu

This reminds me of this article that I read a long ago which stated that high end super luxurious hotels go as far as to arrange breast feeding ladies for high profile mothers who don't want to be bogged down with that while visiting UK. This would be interesting to see.

Birthcare centre or known more as confinement centres is fairly common is some Chinese diaspora like in my country Malaysia. It is mostly used by new mothers who one reason or another unable to have their mothers or mother in laws or any other help needed to care for themselves during the 1st few months of delivery. Some stay in these centres with their husbands or only with their baby for periods 1months to more with total package prices ranging about USD1,000 and above on monthly rate. It is not for all, but yes, that is the price of having a child.
I am not Chinese but I do know of some friends who utilized these centres, which help the mother to learn to attend to their babies while keeping them in a nurturing environment.

Not all Asian cultures have these, even my own do not. From what I know, Asian cultures I am exposed to place a lot of cultural recovery to new mothers, many dos and don'ts needed to be followed. And ladies who specialized in caring for them can earn amounts of money. Some are even hired to solely to bath the baby.

this is why to me it is pricey to have a child.