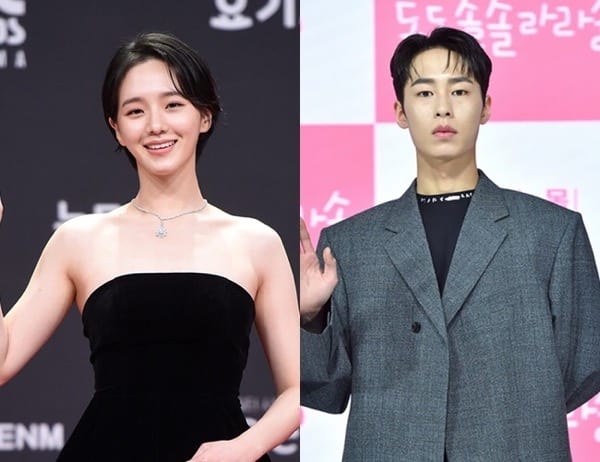 Park Kyu-young (Sweet Home, It’s Okay to Not Be Okay) and Lee Jae-wook (Do Do Sol Sol La La Sol) have been confirmed to star together in upcoming drama Dal-li and Gamjatang. It’s a classic romance story between two people of different backgrounds.

Lee Jae-wook is set to play the second oldest son of a nouveau riche family. His parents began a no-name, hole in the wall restaurant that grew into a global franchise with over 400 locations around the world. He works as the director of operations for his family company, but he’s completely unlearned and uncultured. Among his achievements are consistently ranking dead last throughout his high school career, and of course, he doesn’t have a college diploma. Desperate to penetrate the inner circle of high society and throw off the tag of “new money,” he decides to take over an art gallery.

In the process, he meets Park Kyu-young’s character who is the original owner of the art gallery. She’s his complete opposite: from a traditionally rich family whose wealth collapsed overnight. Formerly a visiting researcher at Kröller-Müller Museum (Netherland’s most prestigious art institution) Park Kyu-young is the curator-owner of the Cheongsong Art Gallery until her family is ruined.

She’s the definition of a well-bred lady. Her actions and words are always gentle and measured; politeness, considerateness, and generosity have been instilled into her since childhood. She speaks seven languages, and is well-versed in art, history, philosophy, and religion.

How Park Kyu-young and Lee Jae-wook grew up, their current financial status, their educational backgrounds, their personal tastes and values are all different. But somehow, these two find their way into love as they fight over the near-bankrupt art gallery.

KBS’s Dal-li and Gamjatang will be co-written by Sohn Eun-hye (MBN’s Witch’s Love) and Park Se-eun and directed by Lee Jung-seob (Angel’s Last Mission: Love, Healer). As of yet, no air date has been announced.

Via Newsen, IS Plus

I'm still traumatised from Do Do Sol Sol La La Sol, but sure, I'll bite. It sounds pretty cute.

Same here. Also, It's not the same writer

Relax, it is not the same writer AND it has the same director who, with the help of Shin Hye-sun, made a watchable show out of the incoherent script that was ANGEL'S LAST MISSION.

DDSSLS was entirely the fault of the writer and no one else. And I am still pretty steamed about it.

I will watch Lee Jae-wook in anything so I'd have been onboard anyway but this actually sounds cute. And I like the credits for the director at least.

it has LJW, so I should check it out. It would be nice to have a simple romcom . ( not the do do sol sol kinds).

Well hopefully this is better than that other drama we don't talk about. We hope he is not a minor and hope he isn't sick.

@kafiyah-bello What? I don't believe he had any work before this, total amnesia. 😁

You are right, brain fart😂.

This is coming from the people behind "Healer" and "Witch's Love"? Count me in! I laughed a little at how much detail is given about the characters, they seem very intentional and I'm looking to see where it goes.

Super glad that Park kyu Young has a new role, I wanted more from her after "It's Okay Not to Be Okay"

It's not the writer of "Witch's Love" 2014 with Park Seo Joon & Uhm Jung Hwa if u meant that one,if not sorry for the post as i know the 2018 one is the less known and many including me at first had the same idea...

Really happy for Park kyu Young as i started to like her a lot after Sweet Home...Hope the writing will be good.

@miky88 I totally thought it was the 2014 version, thanks for the clarification! I'll probably still tune in, but it's nice to know :)

Park Kyu-young is rising up since IOTNB. She's also in a new tvN drama this yr, so she's busy busy!! KBS/MBC typically hirer younger/rising talents & giving them a chance to shine.

Upon googling, I also found out she's a smarty pants! "She attended Busan Foreign Language High School and Yonsei University – Department of Clothing and Environment; she graduated from the latter in 2020." It's cool finding out about brainy celebs!!

Oh wow, that's so cool thanks for sharing! I'm also really happy to see her rising. I loved her in Sweet Home - she seems to play any type of character well!

First off the title. Here is the story on gamja-tang, the spicy Korean soup that our ML’s family hole in the wall restaurant served:
https://en.wikipedia.org/wiki/Gamja-tang

I followed Lee Jae-wook from WEATHER to DO DO so I will be following him to DAL-LI AND GAMJATANG. LJW should not have to shoulder any of the blame for DO DO’s spectacular crash landing of an ending.

I am pleased with the description of Park Gyu-young’s character. The character she played in THE THIRD CHARM left a bad taste in my mouth. (Remember? She played SKJ’s sister. Made life miserable for him in his teenage years.) That is all forgotten. On to a new role.
Also this being a KBS production we should not experience availability angst but you never know.

She was great in NOKDU FLOWER if that helps.

Yes. I went to AsianWiki to refresh my memory. She was very good.

I also liked her in drama special THE TUNA AND THE DOLPHIN (KBS World, YouTube). It's a light watch. I'd love to see her in a full-length drama with Yoon Park.

totally love gamja-tang but it is still hard to find

Excited to see Park Kyu-young in a leading role! She was great in Sweet Home and It’s Okay to Not Be Okay. Only made it a couple episodes into Witch’s Love, so not super thrilled there...but I’m definitely willing to give it a shot.

DDSSLLS ended...terribly, but I don’t really put that on the actor, so I’m not hanging that baggage on Lee Jae-wook (plus his couple in WWW was adoreable with Lee Da Hee). Here’s hoping Park Kyu-young’s first lead ends better than his did :)

It’s always refreshing to see a drama where the woman is the rich educated and well bred one (without being an evil trash person mind you) and the dude is boorish, common and/or social climbing.

I'm glad that a privileged woman coming from a traditionally rich family is described here as well-bred, gentle and generous thanks to her upbringing, instead of pompous and abusive like many kdrama heiresses grow up to be. And I also like how she faced the collapse of her affluence head on and has been striving to make her own. Might just give this a try.

I'm excited for Park Kyuyoung and hoping this is a LJW drama after Weather that I can get behind.

The "rich= smart & cultured, poor= dense&uncultured" stereotype kind of rubs me the wrong way though

The plot sounds like the weekender “Family’s Honour” from 2008 about how the heir of a new rich family falls madly in love with the cultured eldest granddaughter (a fine arts academic) of a respectable but declining company that he plans to take over.

It’s quite a good family drama with great chemistry across main and side couples as well as the interesting family dynamics on both sides. But rewatching is no longer desired with Park Shi-hoo as the lead unfortunately.

I will tune in for LJW - a very talented young actor who masters all his roles well.

Omg I love the premise. Also I will watch anything with Lee Jae Wook in it although I'm still traumatized by his previous drama

Park Kyu-young stole my heart in The Third Charm. I can't wait to see her in a leading role!

Awww this looks cute and hey PKY gets a lead role! I don’t know is she’s ever had one but i like her in the support roles that i’ve seen so far.

Upon reading ‘opposites attract’ I suddenly think of @ndlessjoie 😱

Oh we three. 🥰 I have come to a conclusion that I would listen to toki’s suggestion and get the confirmation from mugy: If mugy doesn’t like it, then it’s a yes. 🤣🤣🤣🤣🤣🤣🤣

I still think you'd really like Run On if you waited a few episodes.

I am definitely going to watch this one.

I just read this. Why do I feel so excited about the premise? I think I'll definitely check it out. No drama premise has made me this excited in ages. Somehow a cultured woman falling for an uneducated uncultured man is tingling my catnip roots.