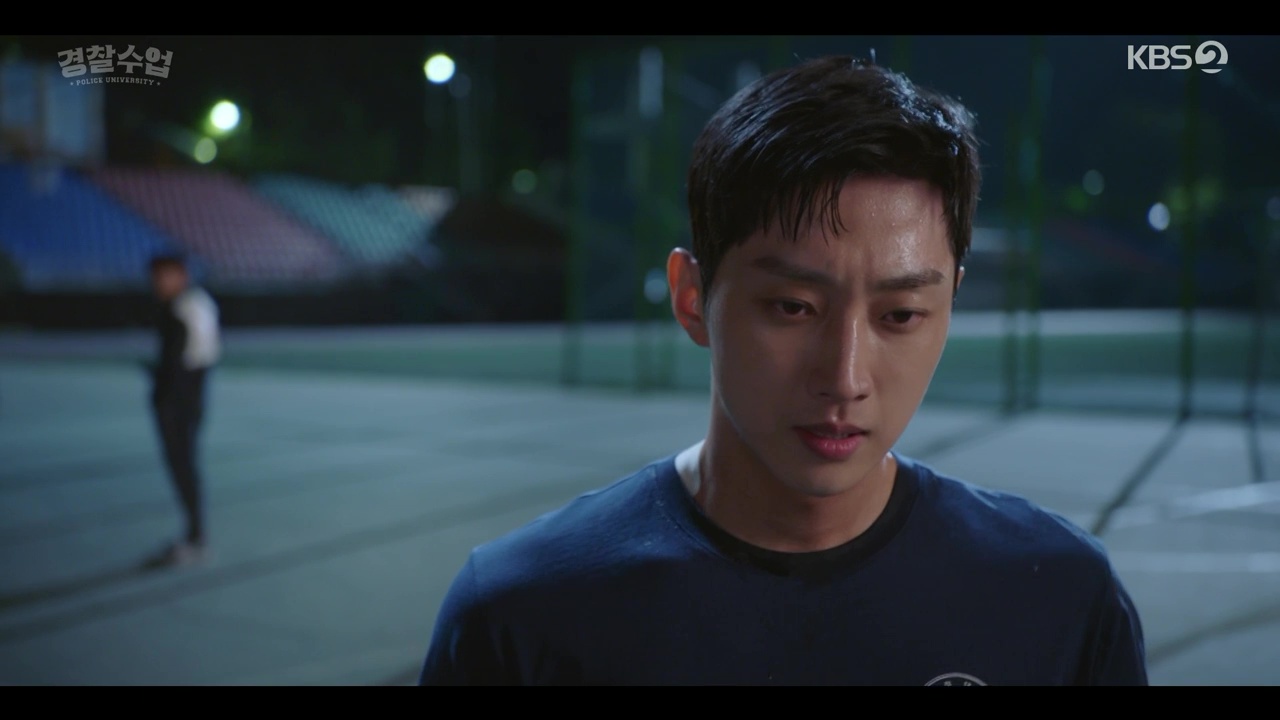 As our hacker commits everything he’s got to his new dream of being a police officer, he winds up with a little more than he bargained for. Between the difficulty of being accepted into the university, and dealing with adversity once he gets there, our newbie cadet has a long way to go. But not to worry — we know his heart is in the right place, and he’s already on the right track. 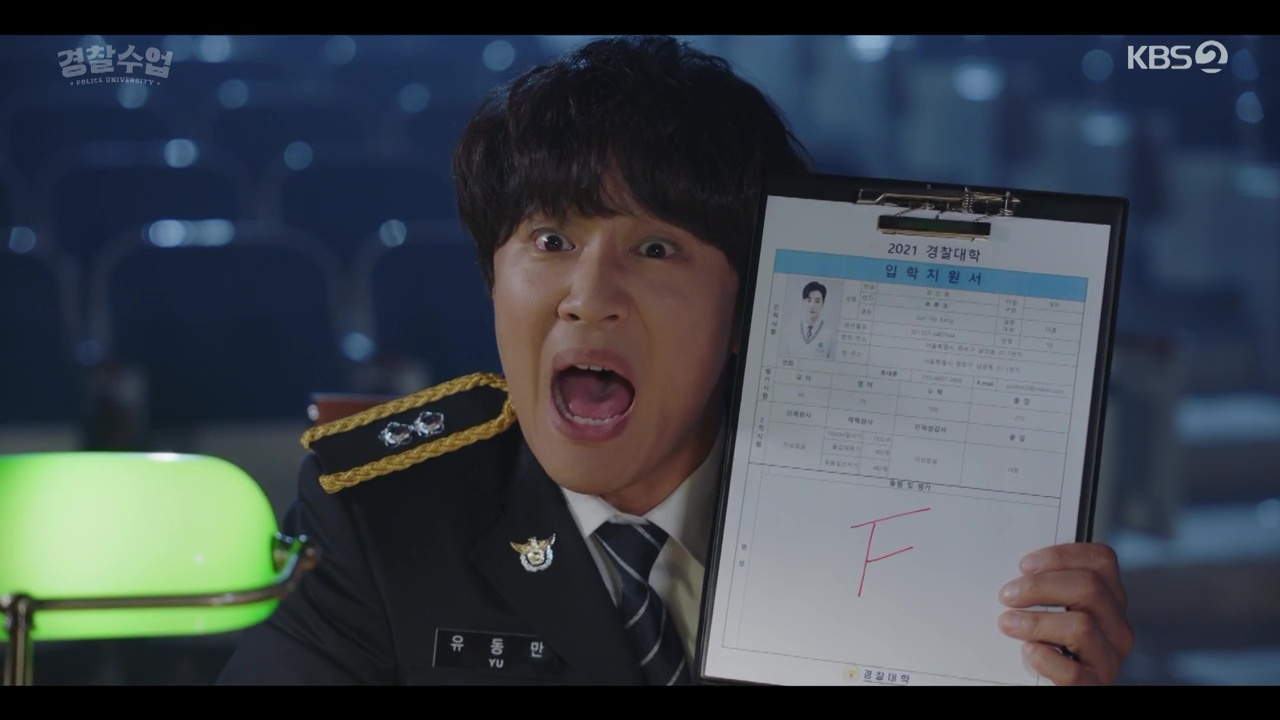 It’s hard to tell who is more horrified during the panel interview. Is it Dong-man, meeting the hacker punk that cost him his demotion? Or is it Sun-ho, meeting the detective that hates his guts and knows his criminal secrets?

Luckily for Sun-ho, the rest of the panel seem to be honest and intelligent humans who are passionate about what they do. They look straight at the heart of everyone’s interview answers and all of our cuties wind up making it into the university — including Sun-ho. Dong-man might do everything to prevent that (including giving him a big, fat F), but the side-eye he gets from the other three officials for his immature behavior is hilarious. 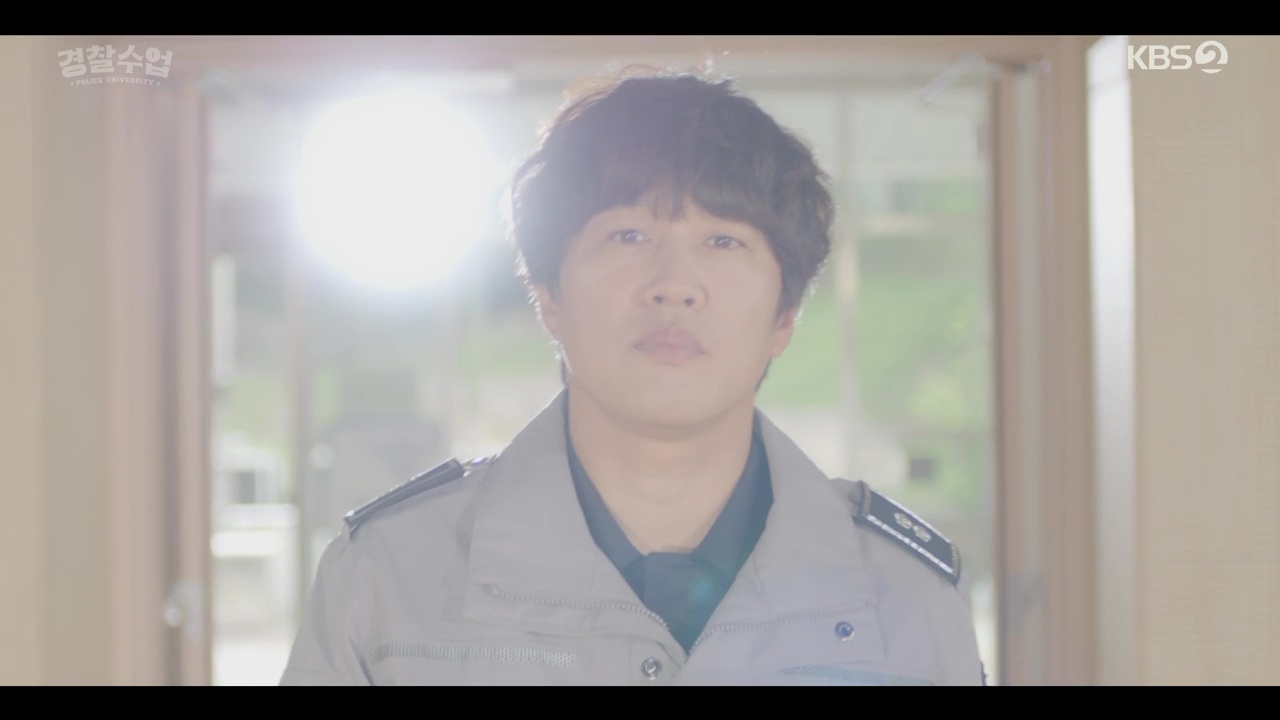 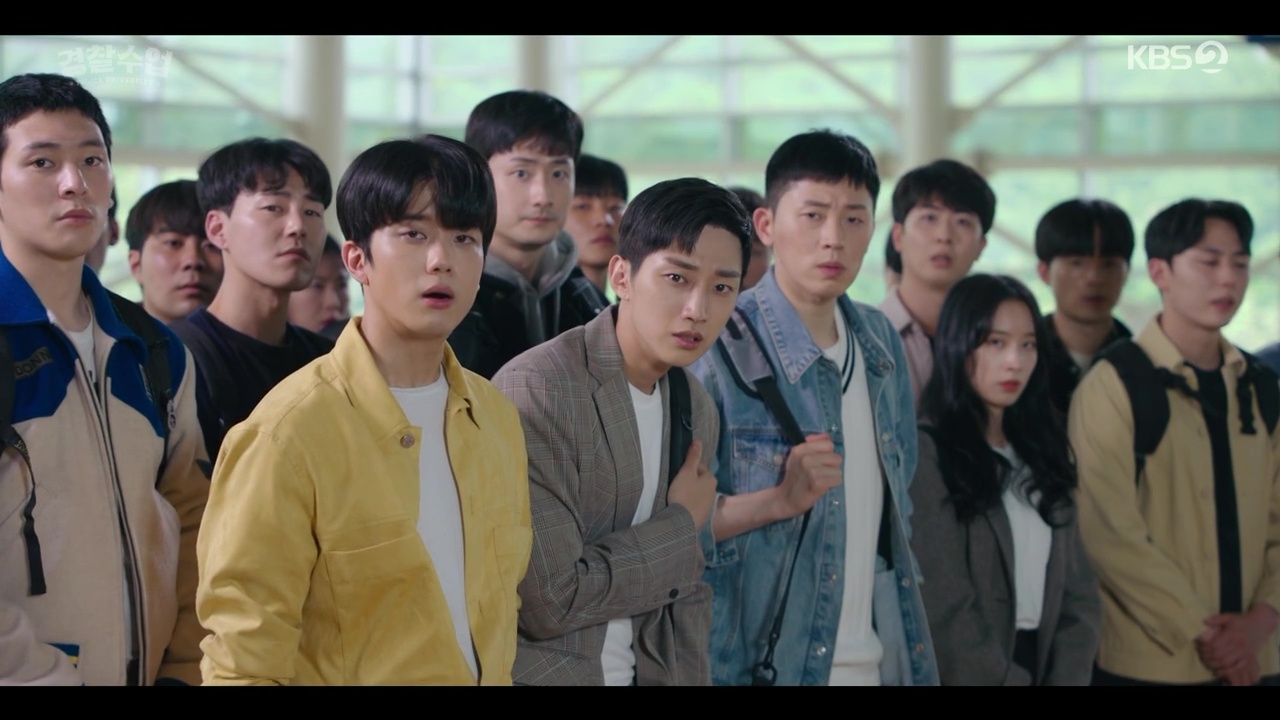 Dong-man is determined to out Sun-ho for his past behavior, but it’s hard to tell if that’s because he really cares about justice, or because his pride has taken a hit from that case, and the only way he can get it back is to retaliate against Sun-ho. I’m sure we’ll dig into this as we get to know these two more, and as they get to know each other more, but in the meantime, it’s pure retaliation and antagonism between them.

Sun-ho’s string of unfortunate luck when it comes to Dong-man continues when the group learns that Dong-man is their drill sergeant. He’s as tough as can be expected, but he really has it out for Sun-ho. It’s like he has a giant bullseye strapped to his back. We know that Sun-ho is a good seed and that he just made a wrong decision, but Dong-man hasn’t learned that yet. To him, Sun-ho is a criminal in cadet’s clothing. 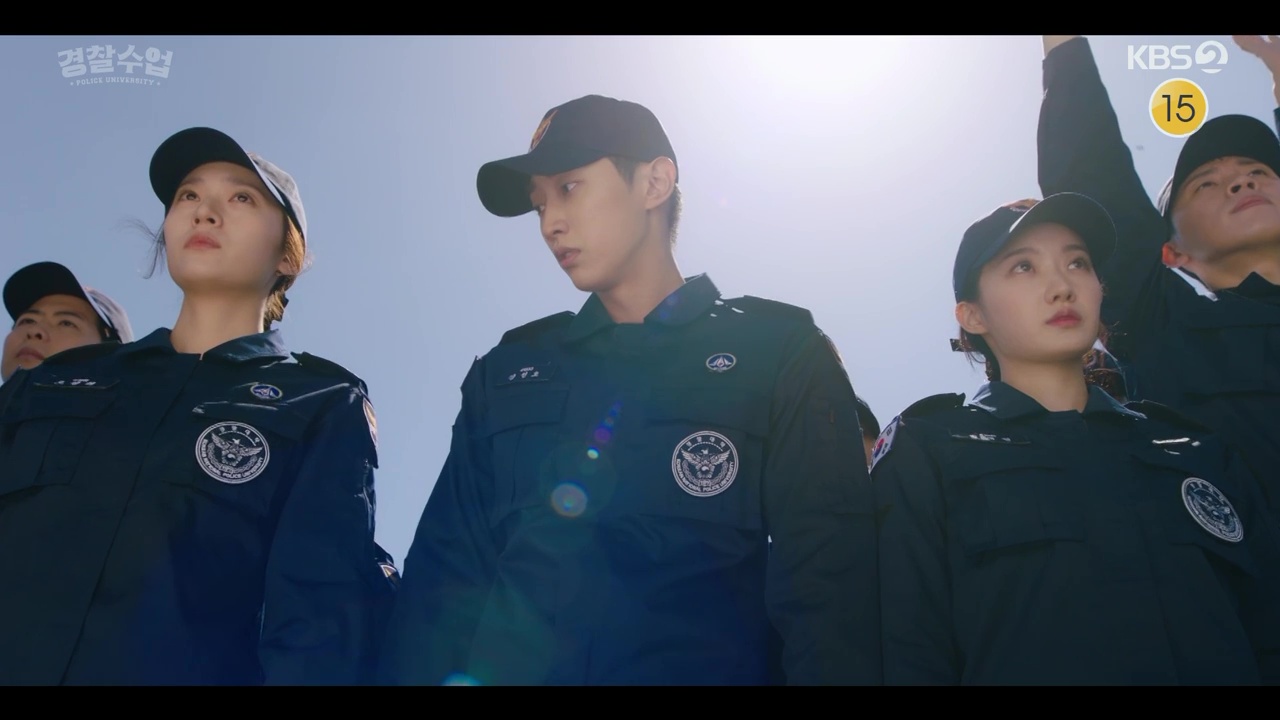 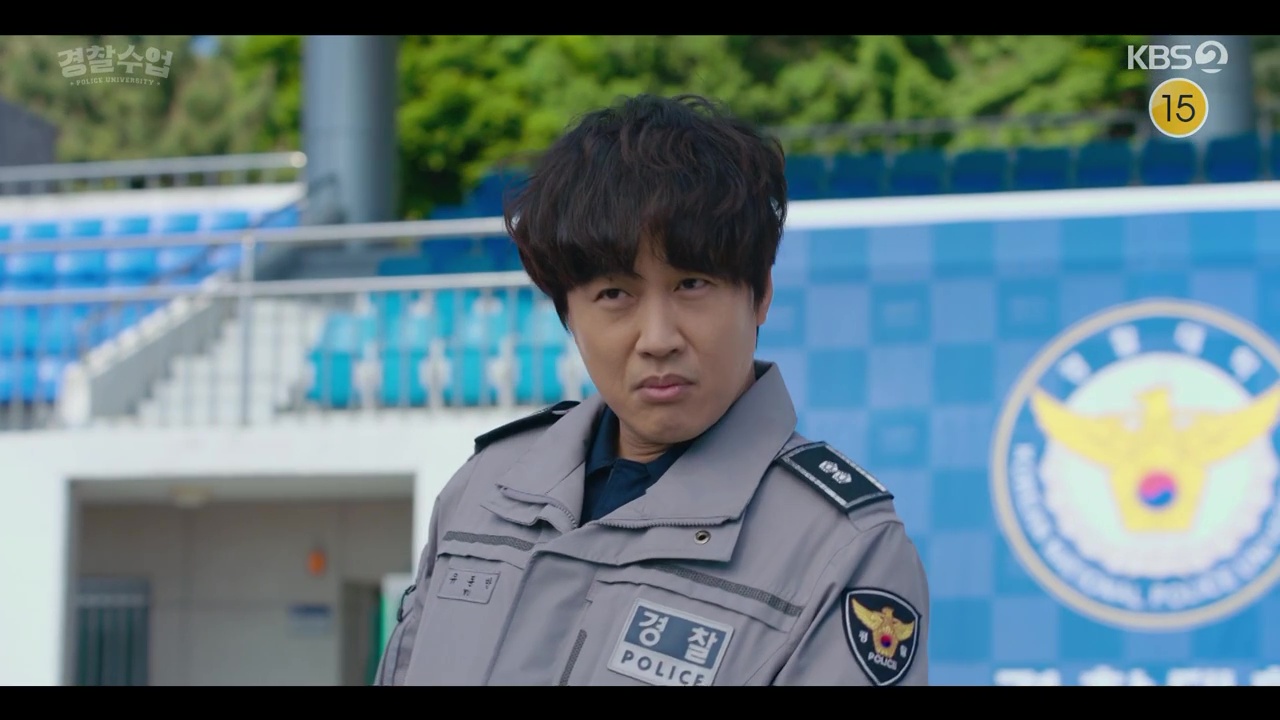 While Sun-ho is dealing with Dong-man out to ruin his life, it’s a good thing that he’s got a nice crew forming around him. They’re the misfits and rejects and they always come in last, but gosh I love them. Joon-wook, Bum-tae, Sun-ho, and the rest of the bunch are just too sweet. They have the farthest to go, and the most to grow, but we also can tell they’re the ones that will be the best in the end, and become really great police officers.

I think the same can be said for Kang-hee, but it’s kind of hard to lump her with the boys, since she’s such an overachieving, Judo-expert, top student. Her character is kept from being too pitch perfect by the drama with her mother, but she’s equally pure-hearted and bound to succeed. 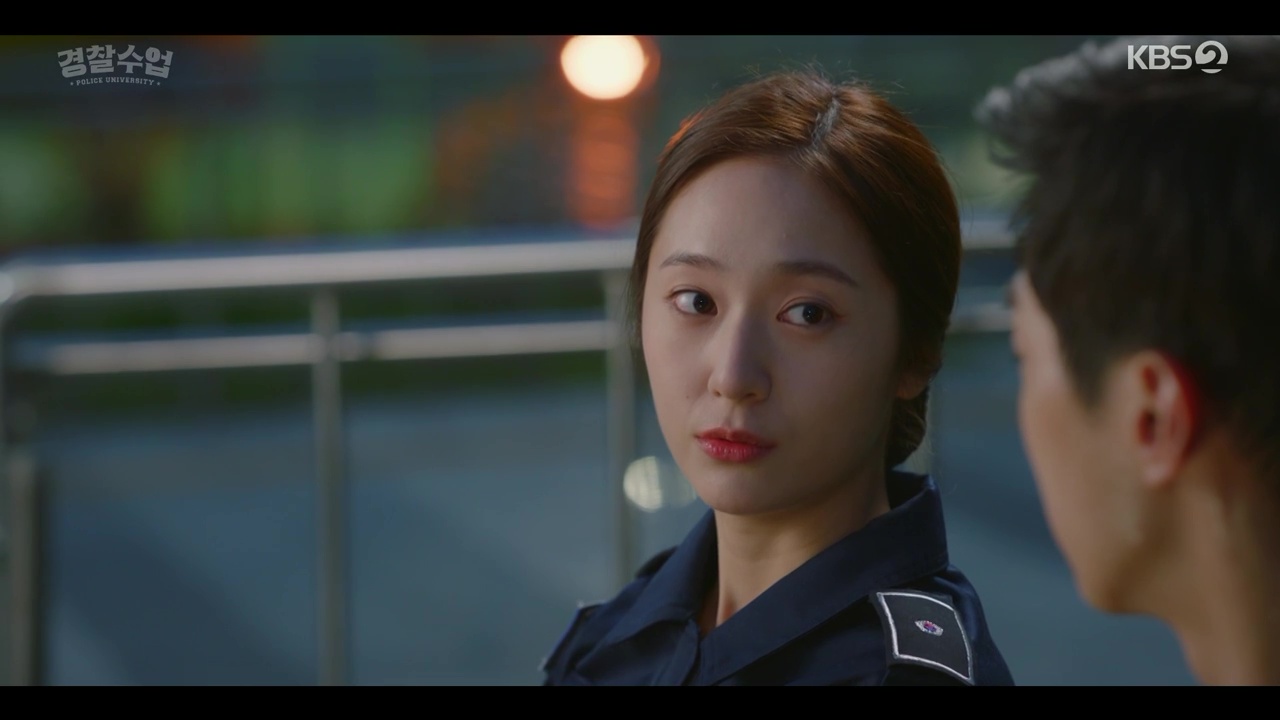 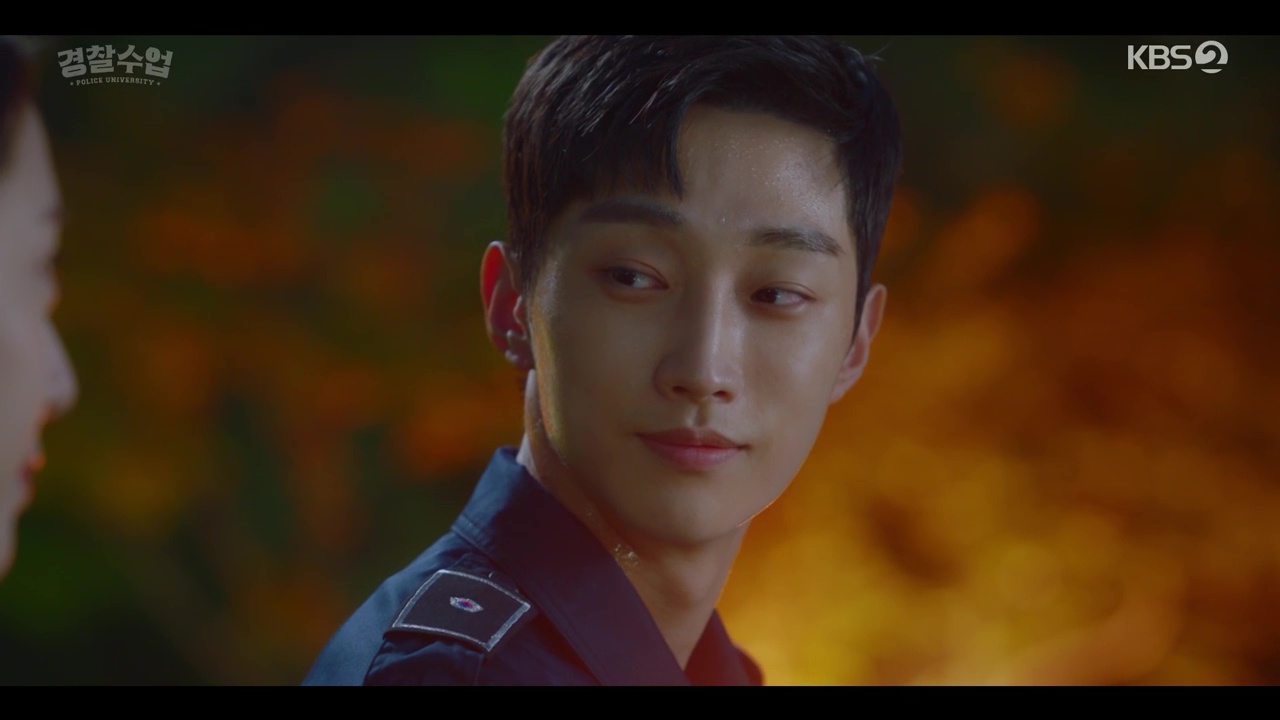 Speaking of the scene with Kang-hee and her mother, what a great example of everything this drama is doing right. It’s an exploration of family relationships, right and wrong, and crime and punishment. But it’s also not too heavy — it’s sweet and fizzy, too.

In other words, the drama knows how to balance its parts. It takes an upsetting and emotional moment for Kang-hee, and then transforms it into a sweet romantic moment (courtesy of Sun-ho standing in front to shelter her) only to transform it into a bit of comedy. Sun-ho’s adoptive dad sees what’s happening and their romantic moment is undercut by the dad’s commentary. (“If he walks away he’s a fool.” *Watches Sun-ho walk away* “He’s a fool.”) 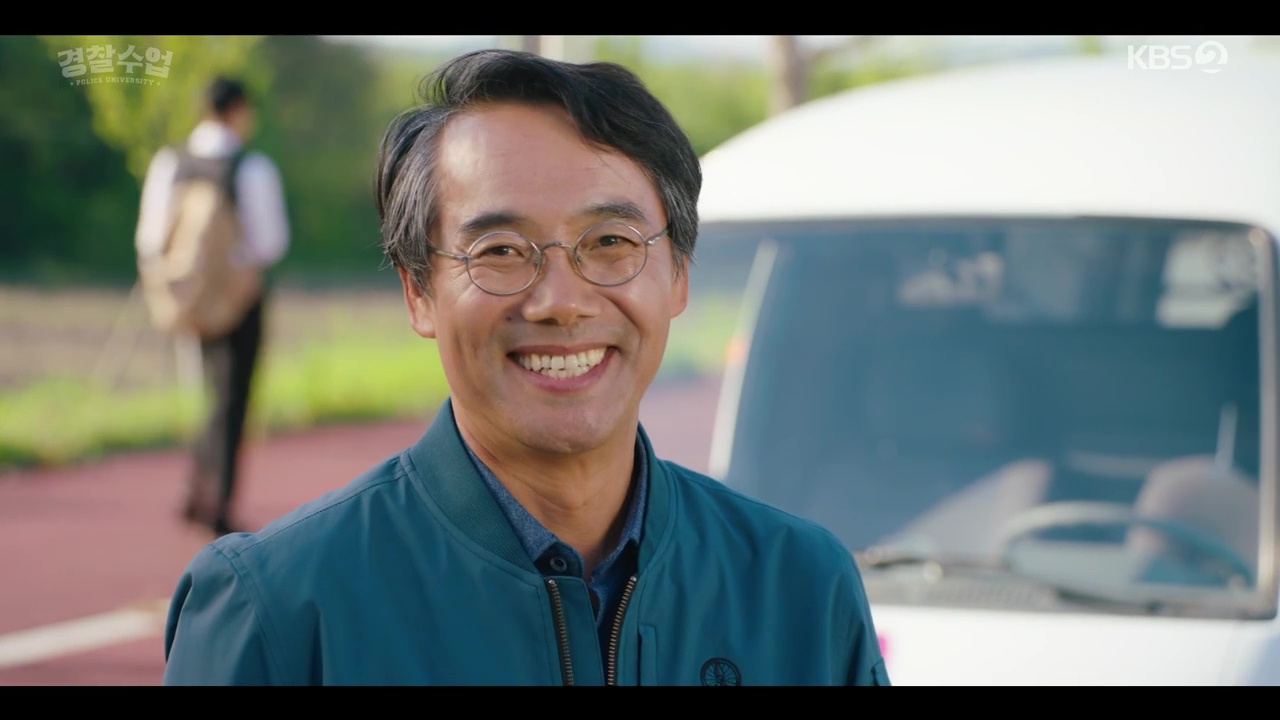 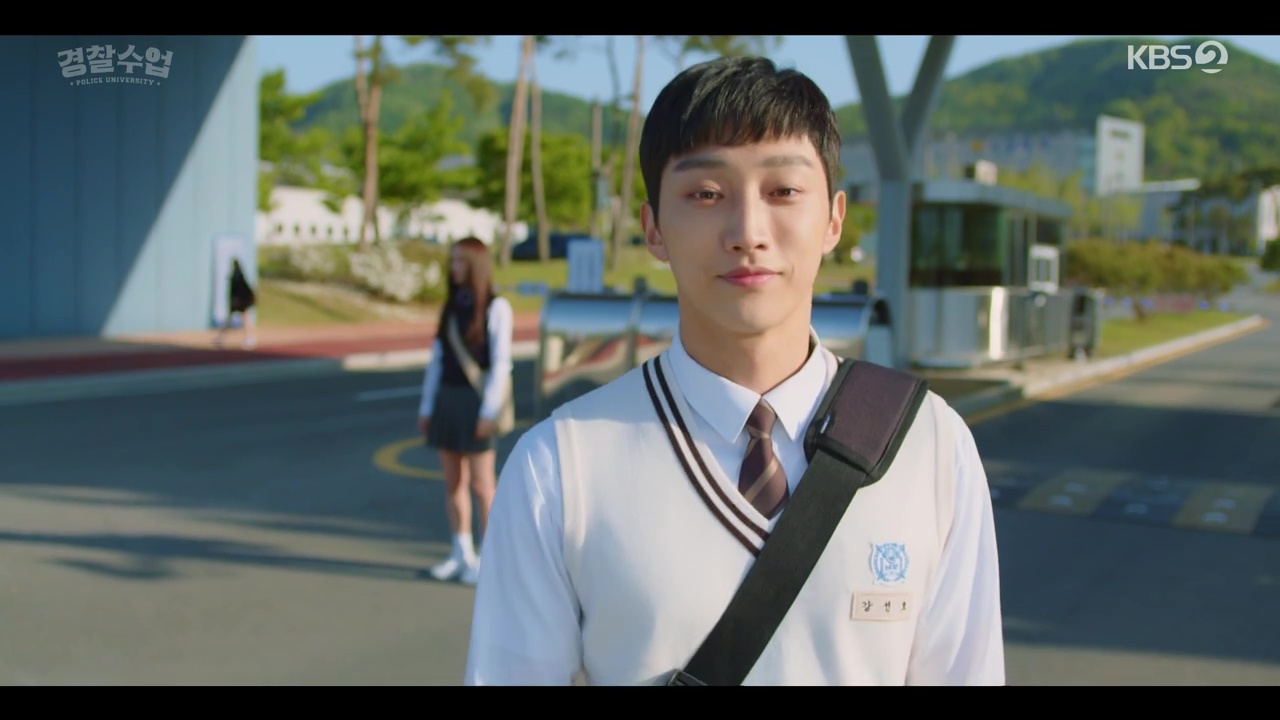 The other thing that the drama is setting up nicely is lessons around teamwork and leadership. It’s totally on point for a drama such as this, and I really liked how the episode played around with that. Sun-ho is “voluntold” by Dong-man that he’s leading the third group of cadets, and over the course of the episode, we see him struggling to fill a leader’s shoes.

But Sun-ho isn’t so arrogant as to not be able to learn from others — he watches what the other two team leaders do, and you can almost see his brain whirring. Soon, he’s helping his straggling teammate across the finish line, and taking responsibility for contraband food items (that ramyun noodle slurp, though, lol!). 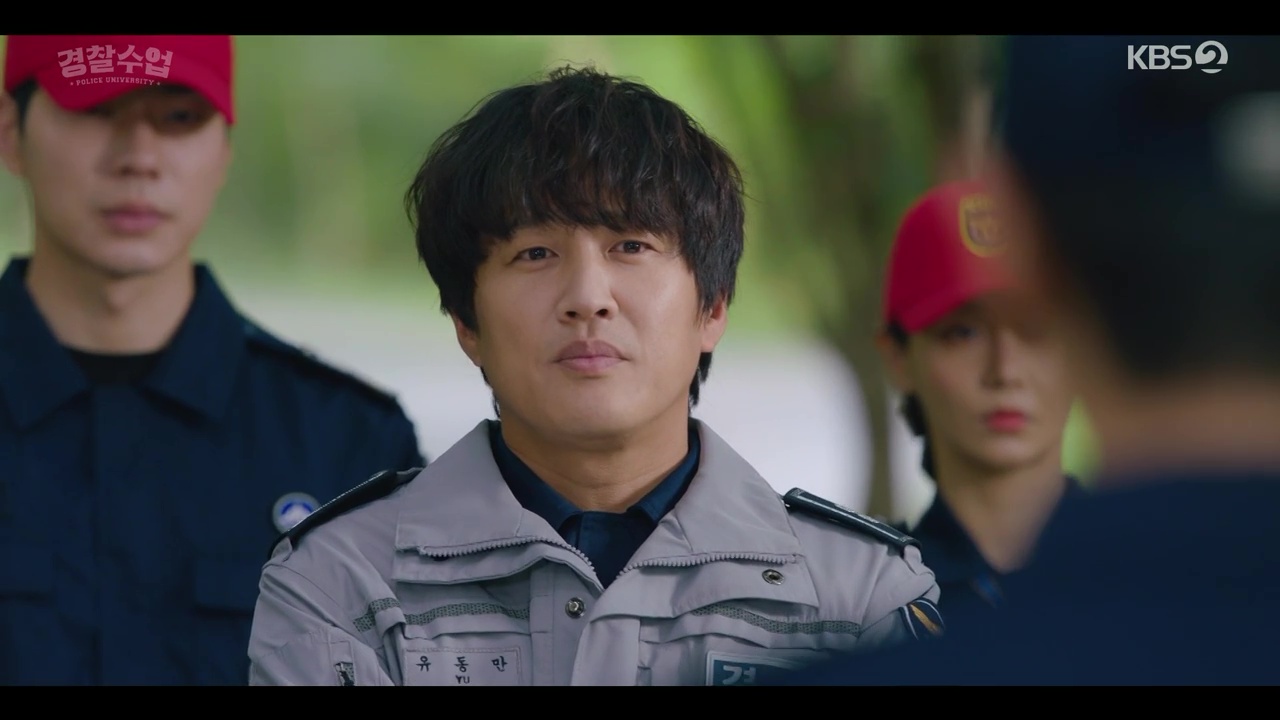 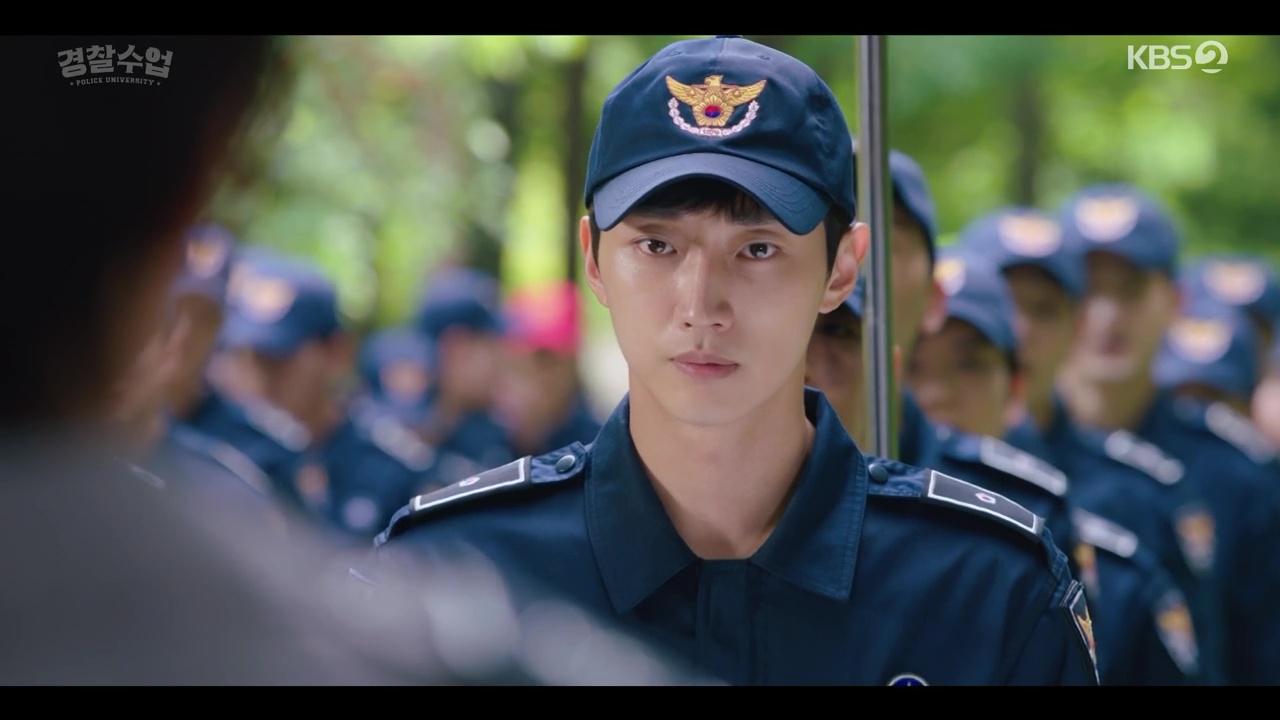 After an episode of torture and growth for Sun-ho, we land on an interesting twist. Dong-man is confronting Sun-ho for his poor performance, poor leadership, breaking the rules — and stealing money not once but twice. Sun-ho is on his knees; suddenly this dream that wasn’t even his dream is more real than anything. And just when it looks like he’s lost for good, Dong-man gets a call that his online hacker pal has been identified: it’s Sun-ho.

Hah, this moment vaguely reminds me of that one in Memories of the Alhambra when Hyun Bin’s character realizes he has to ingratiate himself to the woman he’s just spent a night and a day fighting with. This reveal might just change things for Dong-man — from the way he sees Sun-ho, to the way he treats him — so it will be interesting to see if he sits on the secret, and for how long. Either way, it’s a fun bit of a bomb-drop for the end of the episode, and the drama’s premiere week. 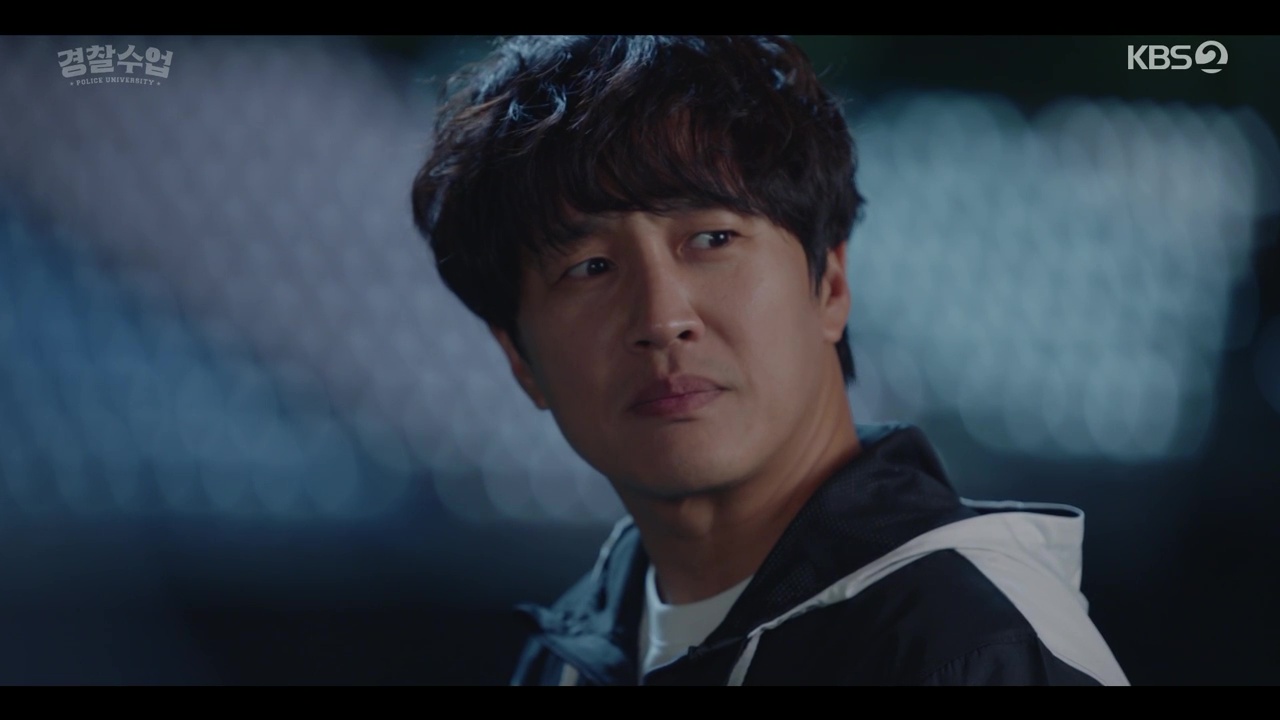 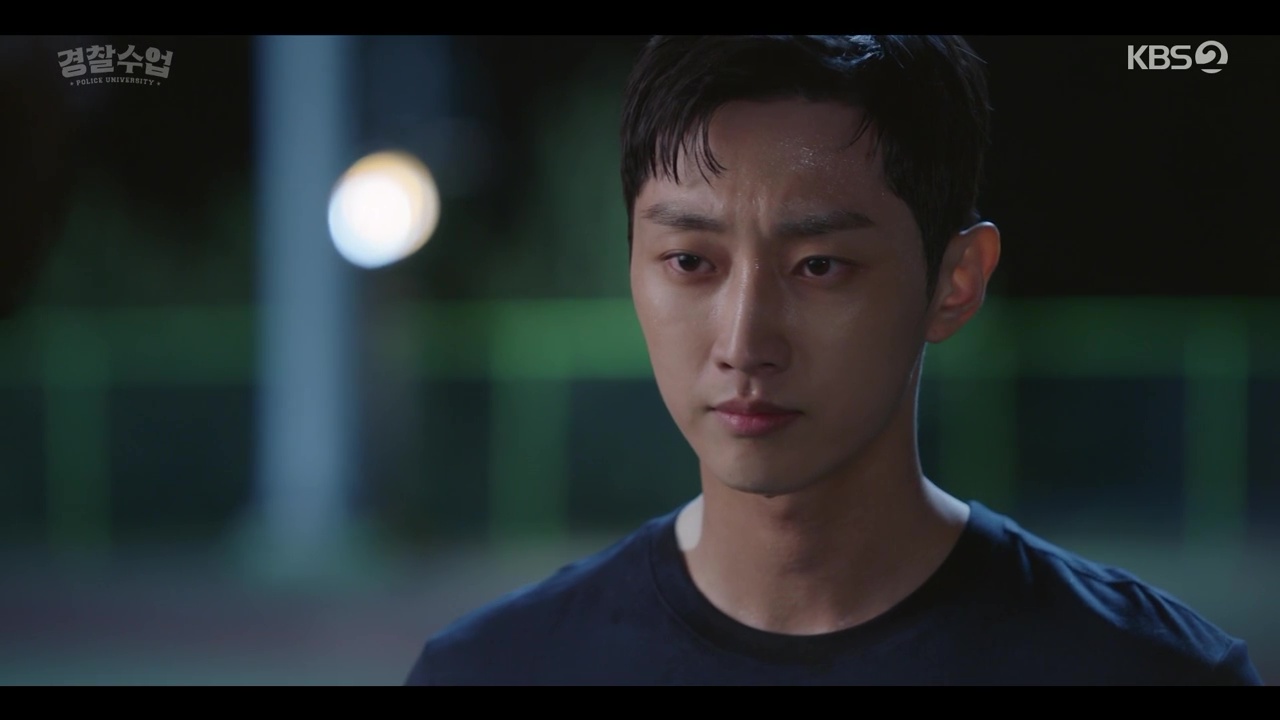 While Police University doesn’t boast the most unique of plots or setups, the drama has a lot of potential for being a fun tale of misadventures and squabbling, but with a center that’s full of gooey cuteness. The young cadets are all so sweet, and I love the budding friendships and romance almost as much as the really heart-warming interactions between Sun-ho and his adoptive brother and adoptive father (more please!).

The bullying reached the edge of annoying for me, but I think it will transition soon. Dong-man and Sun-ho’s war of ideologies (the Camus quote versus Sun-ho’s quote-back about error correcting) is far more interesting than basic training brutalities, and I’m glad to see the drama looking into the deeper reasons why they clash, because these are the ways they will complement each other later. 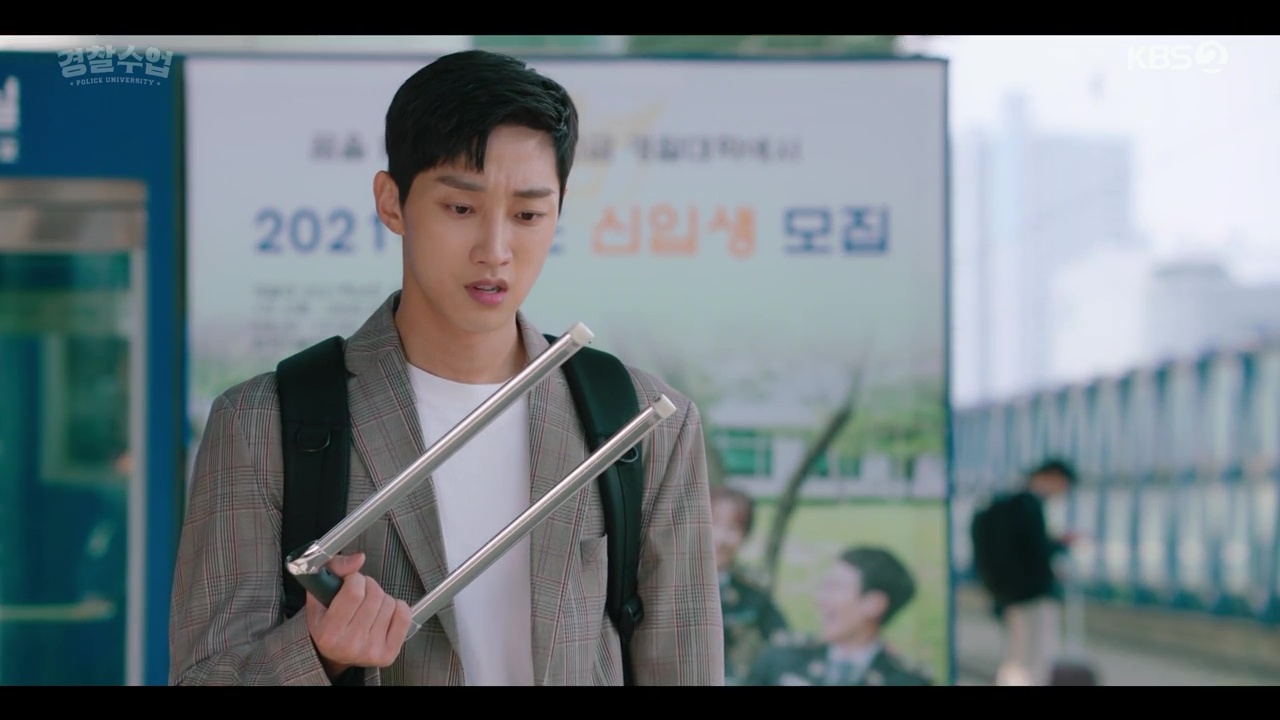 I like this show so far. Let’s just see what happens. And thank you for the Open Thread.
Thanks for the reminder of the scene in Alhambra, that brings back a good laugh.

Obviously funny ever. Even to the little pop culture references... really?! Hahahaha... I'm looking forward for the next episodes until the end.

Dong-man needs growth and fast because for now, I just want to punch him when I see his face...

The reveals were so good- Kang Hee and her mom but mist of all the bombshell dropped on Dong-man at the end of the episode. Discovering that 'Yoon" is Sun-ho has to give him pause.

Meanwhile, I wonder if Dong-man can ever really face his own serious rule-breaking: The reckless driving resulting in injury to Sun-ho's dad was also in itself a crime- will Dong-man ever have the guts to admit that he is just as ready to break rules as Sun-ho was?

I'm thankful that they don't linger too long on whether they each other know who's Yoon & who's Bird. This drama so far is fast paced & meaty!

I also love that this drama show about the real thing during the university interview & during university orientation. (Rather than other university-theme drama that just focused on love stories)

I am liking it so far. The unit three boys are so precious and I cant wait to see their growth in the future episodes.
I hope Dong man gets a character growth soon because he annoys the hell out of me with his double standards and hypocrisy. I felt that his bashing of Sun ho is more of an ego clash rather than about rules. I mean how can he bash at others when he himself breaks the rules. Driving recklessly and causing injury to a civilian is also not an adequate cop behaviour and I wish he realizes that soon. Right now he is so pretty and I had the urge to punch him at multiple occasions throughout this episode.
I loved how they dropped the bombshell regarding Yoon and bird and hope it sheds some sense in to our petty cop.

The drama is not the most creative one, but it does not have to depend on awful sex scenes or rely on an overhype male lead.

...I don't think kdramas "depending on awful sex scenes" is a regular issue, LOL.

But I appreciate the dig lol ;)

I find Dong Man annoying too, his absolutism only seems to apply to other people and not himself. Hopefully by the end of the drama he rids himself of the black & white outlook. I also think the bullying is punishment enough for Sun Oh for what he did.

Love love love Cha Taehyun, but Dongman's character is annoying. I never thought I would say something like this when it comes to Cha Taehyun and the characters he plays in dramas or movies 😂😂
Yes, I too hope his character will grow and mature in coming episodes.
And if one can ask for one, just one wish, please writernim, please make a scene where I can watch and hear his signature heartfelt laughter everytime he saw Kim Junho's antics in 2D1N. I really miss that.

Why such little amount of comments? I have started to watch this show. Right now on ep 3, and...I really enjoyed it. It is like an underdog story.
I love underdogs, I am one of them.