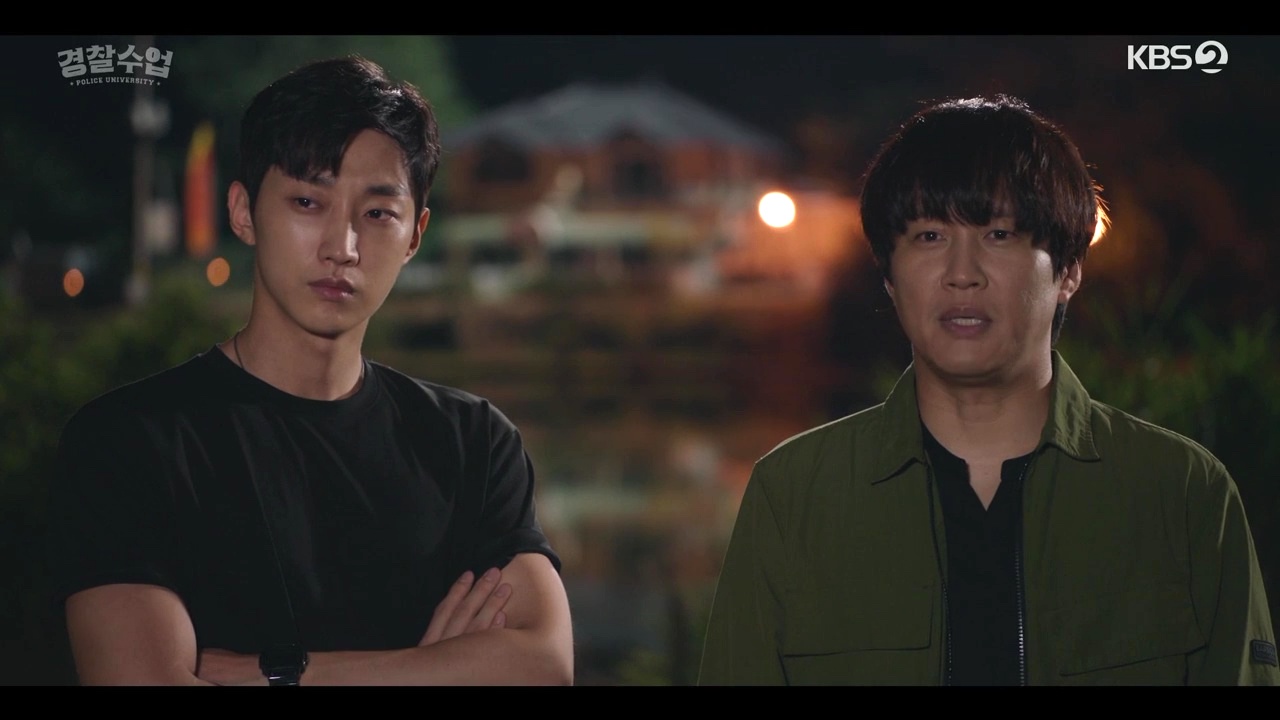 Now that our cop and cadet have officially joined forces, their investigation is underway. Our cop might have a one-track mind, but our cadet has to balance the demands of the investigation along with his studies, his friendships, and his budding romance. What will his priority be? 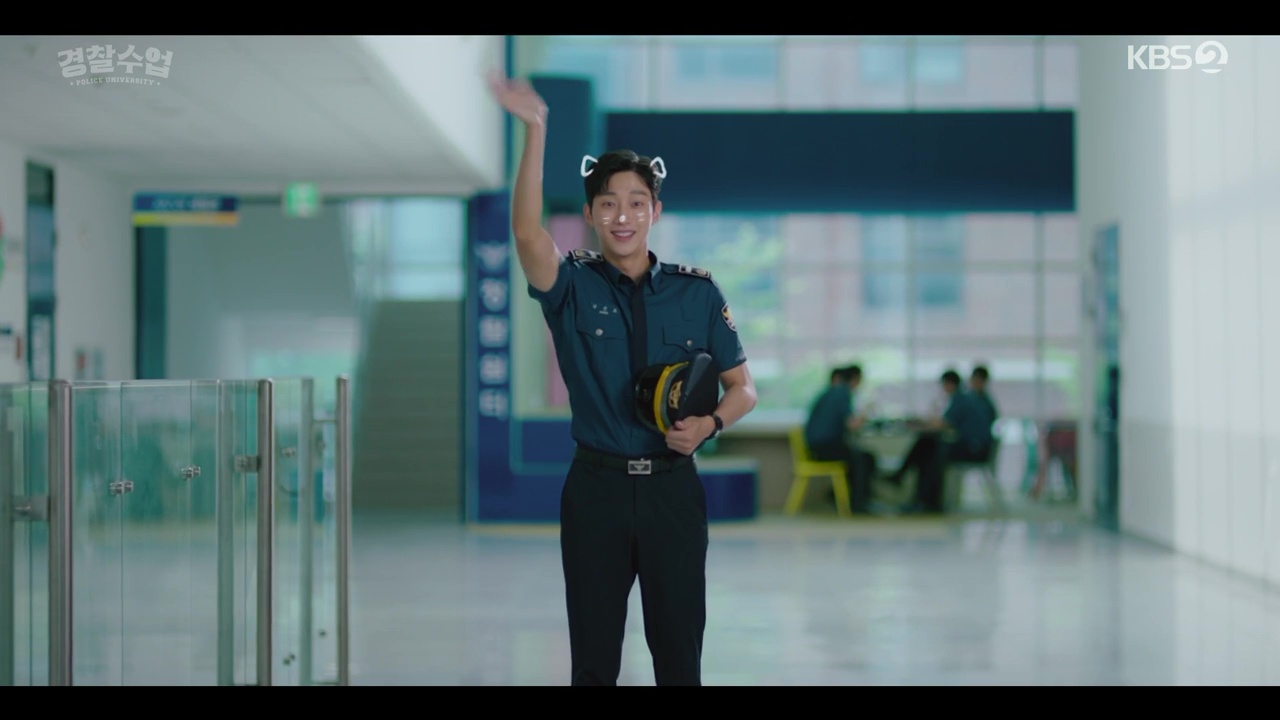 It was such a fun week in this drama — the more we get into the plot, the more I’m enjoying it. The investigation is full of red herrings, but the level of goofiness (and the anticipation of twists) keeps things fun. The romance and rivalries are also moving full speed ahead, and I continue to like that the drama doesn’t make us wait too long for the plot to advance.

Dong-man decides to accept Sun-ho’s help, and the two go about their investigation of their primary suspect: PROFESSOR KWON (Lee Jong-hyuk). He’s not only acting suspicious as heck, but he’s got the right shoe size, the muddy tires, etc., to all but convince Dong-man that he’s their man. 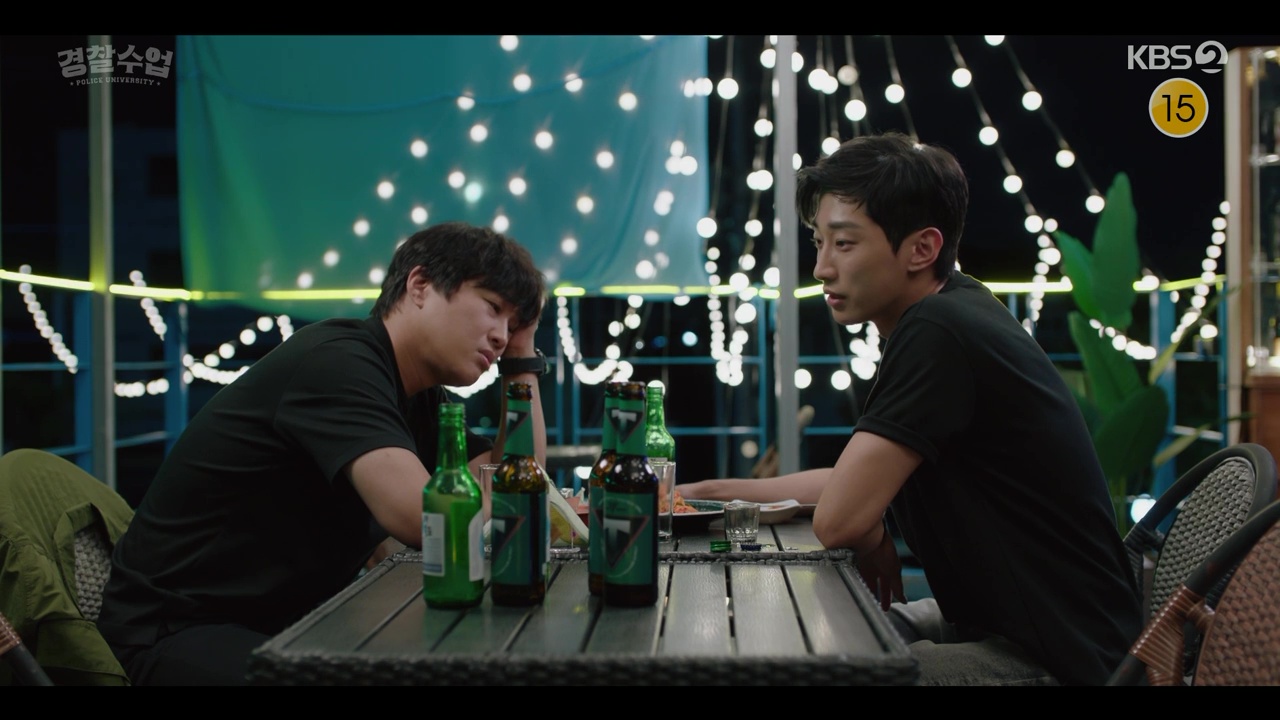 We see the first of Dong-man and Sun-ho’s not-so-subtle collaboration when Sun-ho tries to distract Professor Kwon, and Dong-man uses a wire hanger to break into his car for the black box footage. It’s such an epic fail, one wonders how these two are ever going to investigate properly — but, after all, that’s their charm. And that’s also the charm of this story: our heroes are far from perfect, but it makes it even easier to root for them in their blundering and heart-felt attempts. Heartfelt might be the word of the day here. It’s certainly what makes a goofy story like this hold water.

Professor Kwon is basically absolved as the suspect (red herring #1?), but Dong-man continues ahead just as fiercely with a new suspect in his sights. This time it’s the owner of the local pub they all frequent, whose name is PROFESSOR GO (Shin Seung-hwan). He’s got a criminal record, the right size shoes, a sort of suspicious air about him, and he was also once a professor at the university. Dong-man is convinced, and he and Sun-ho lay an elaborate trap to catch him. 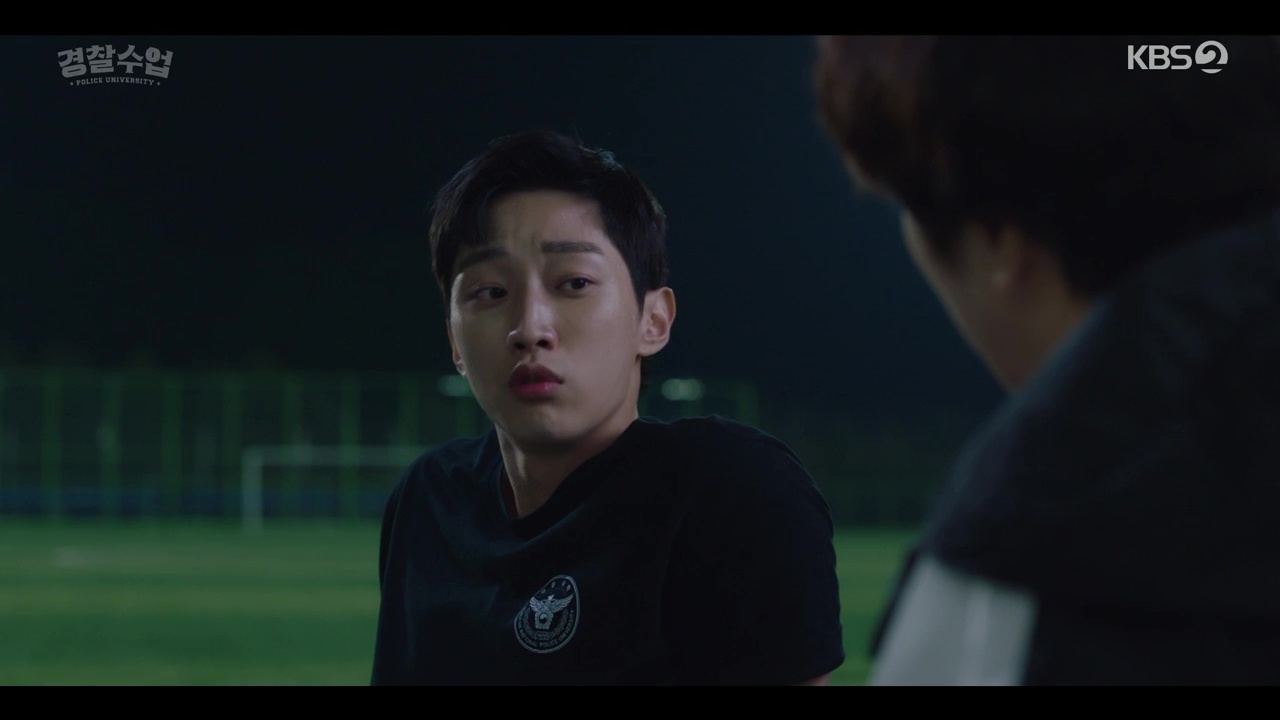 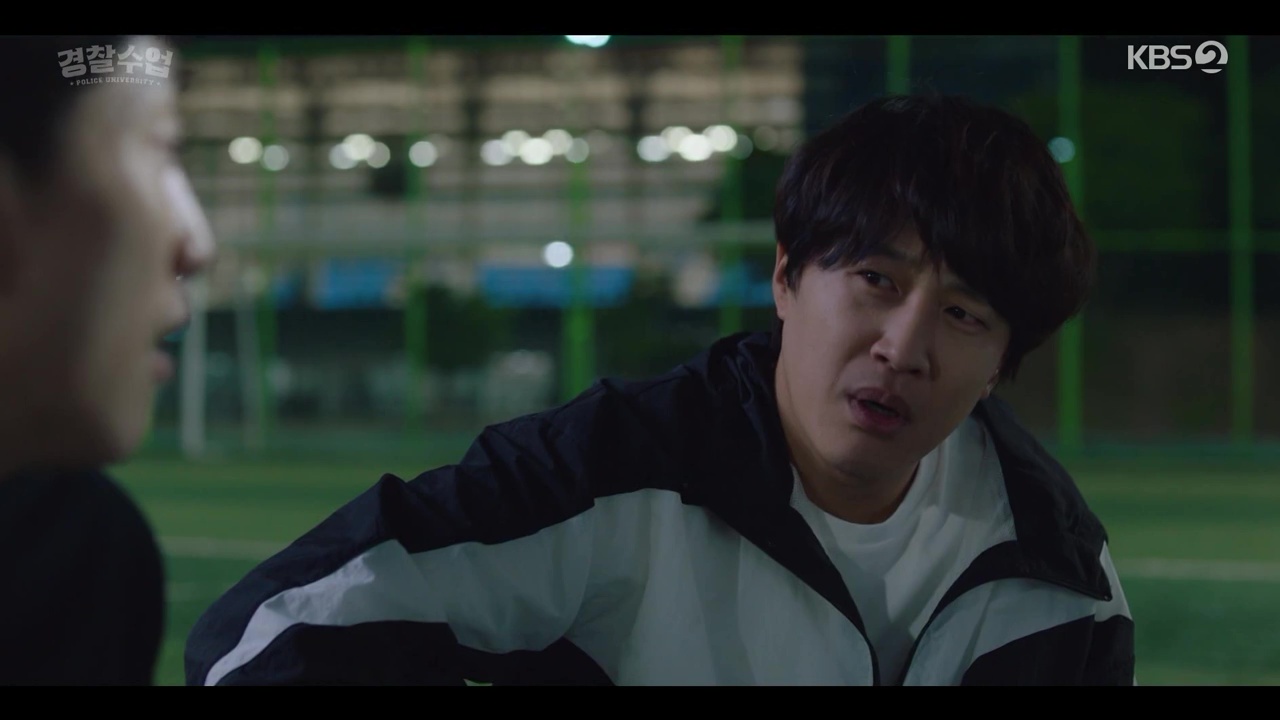 While Sun-ho is up to his neck in all this investigation, he’s also trying to pursue his relationship with Kang-hee. This romance is beyond adorable, and again, I love how early he confessed to liking her, and how quickly we learn that she reciprocates his feelings. This week she’s adorably flustered around him, doing everything from imagining him with cute puppy ears and a puppy tail, to spicy and overly-dramatic close-ups. This show has a good sense of humor.

As for our next stop in their romantic hijinks, we venture into the drunken kiss trope, which plays out in an extended and fun sequence. Sun-ho has gotten dead drunk at a gathering at the pub one night. Forget the fact that he’s with a bunch of the professors who don’t seem to pay attention to the cadets’ curfew: what’s important is that Kang-hee has to drag Sun-ho back to their dorms before they do roll call. 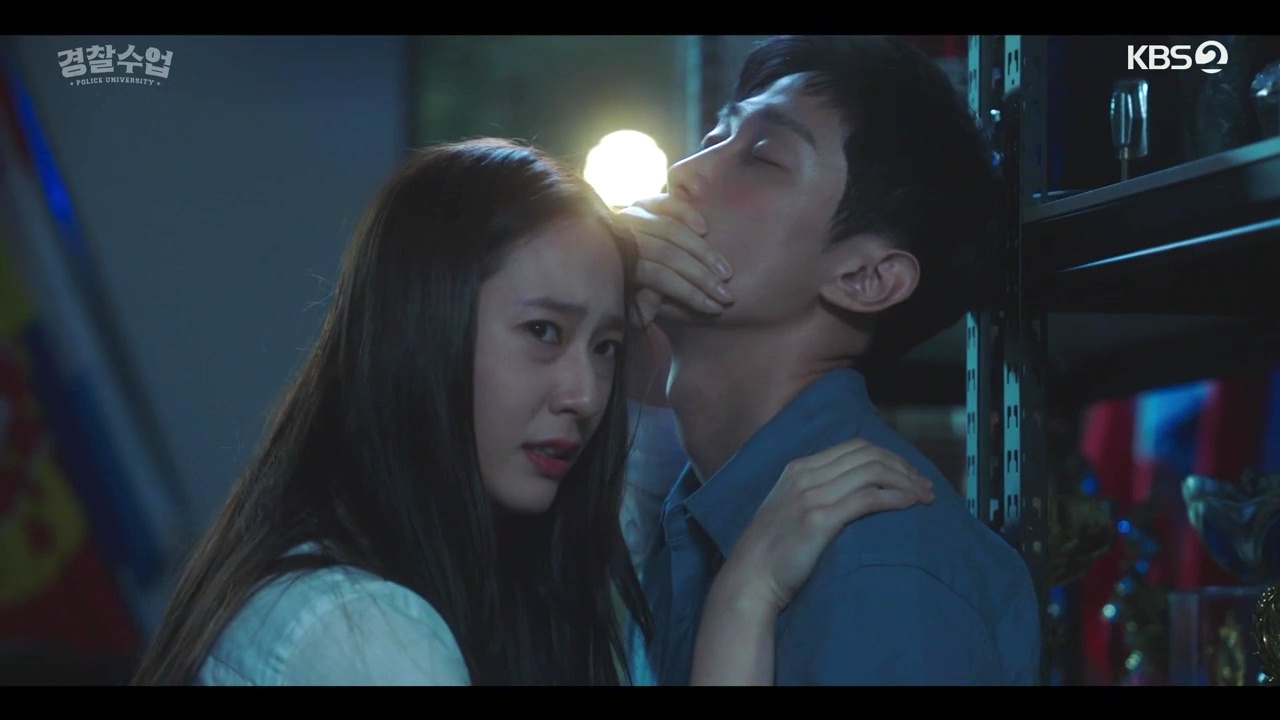 With comically maniacal hall monitors after them, trying so desperately to catch students breaking curfew, Kang-hee literally half-drags Sun-ho all over the university building, finally hiding in a storage room in the basement. Sun-ho is red-cheeked and getting loud, calling out her name. “Kang-hee-ahhhh!” Kang-hee, knowing that they’re about to get caught, does the only thing a girl can do in such a situation: kiss him to shut him up.

At first he’s too drunk to know what hit him, but it only takes about three seconds for Sun-ho to suddenly sober up and start kissing her back (with a real kiss). The editing here tricks us entirely. We think the hall monitor is about to open the door to the storage room and find them, but when the door flings opened, it’s actually Min-gyu, Joon-wook, and Bum-tae, trying to rescue them. 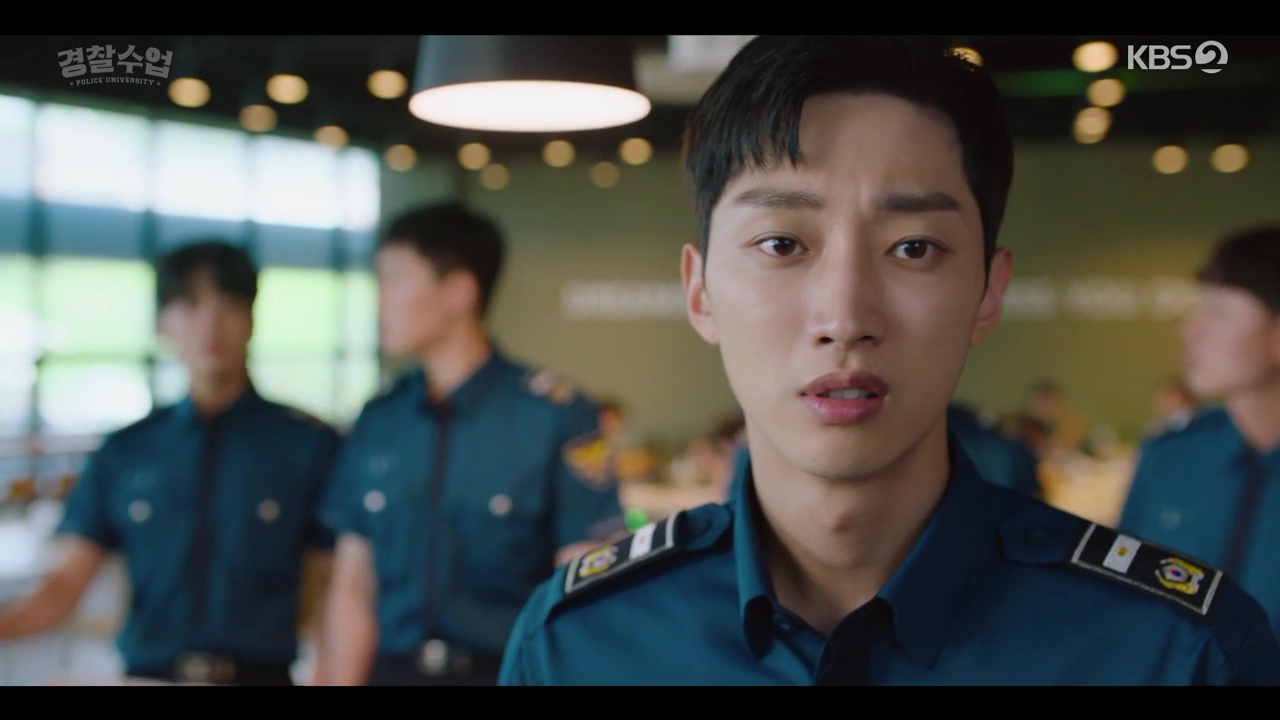 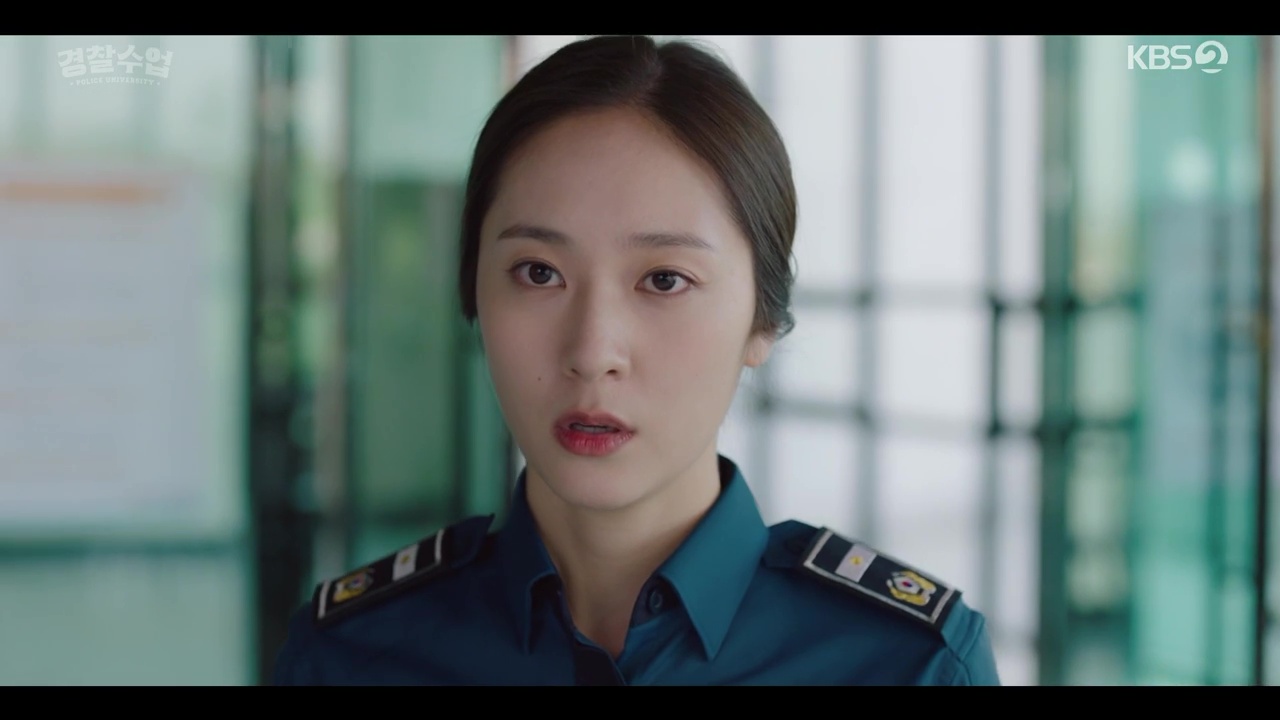 Everyone gets back in one piece, but the aftermath is another level. Kang-hee is even more flustered and embarrassed to see Sun-ho the next day, but since this is dramaland, of course he remembers nothing. And, taking that a step further, he even thinks that he might have assaulted her. He is horrified and seeks her out to apologize for what he imagines to be the worst situation possible, while Kang-hee avoids him first out of embarrassment, and second out of anger, since he clearly doesn’t remember kissing her.

Poor Sun-ho! He wants nothing more than to be Kang-hee’s hero, but the opposite looks like it’s happening. Her mother’s trial is coming up, and it seems like the only way for her to get leave from the school is to win it in a competition. The KNPU sure has a lot of social and team-building events! This time it’s an athletic festival where the professors and students alike are split into three groups. They have to compete in a variety of events, and the winning team gets the leave. 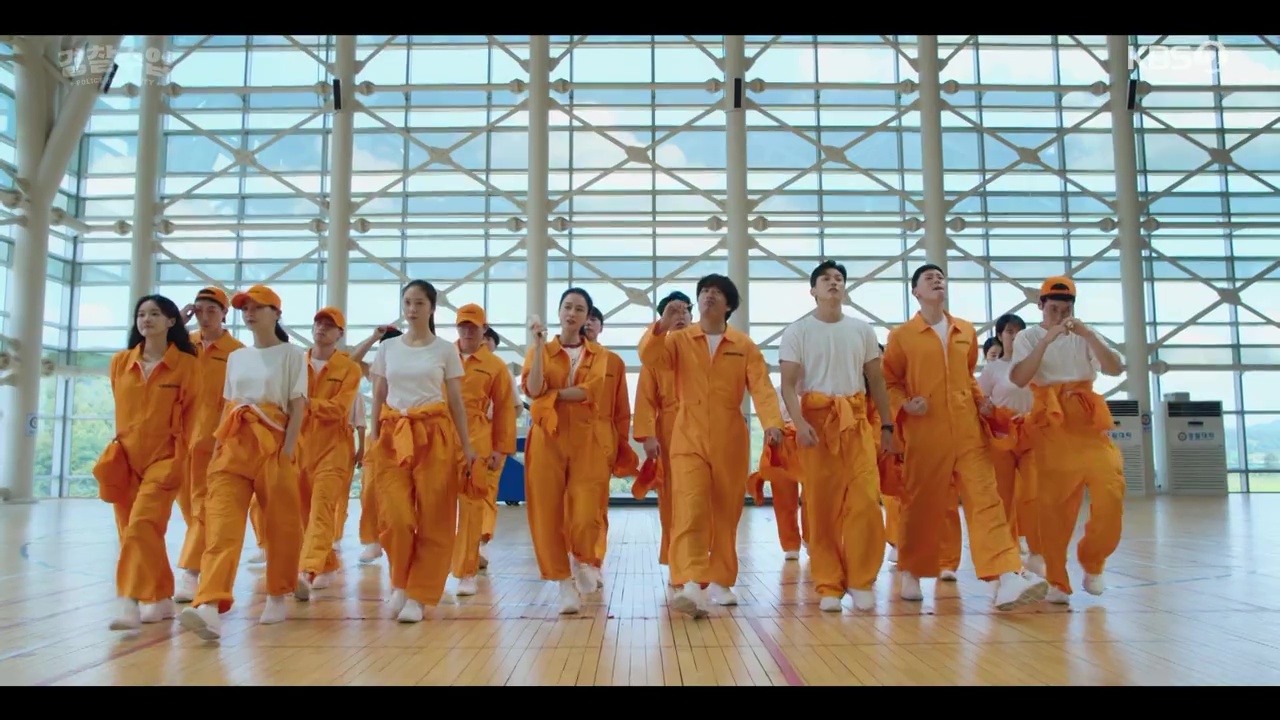 At this point Sun-ho is coding his program all night (to be able to identity the burner phone’s call logs), and all day he’s either in class or doing laps, training with impressive determination. The teams are made, and all our favorite characters are on the same team; we enjoy their relay races with just the right amount of silliness, hijinks… and then gravity. Because Sun-ho has to make a choice: run the race he’s been training for to win the event and become Kang-hee’s hero, or ditch the race and run back to his dorm to trap the baddie.

This drama is very good at setting up moral dilemmas that test Sunho’s mettle. It’s also very good at red herrings. Every time Dong-man is convinced of the guilt of a certain suspect (and convinces us), it’s proven wrong.

Dong-man and Sun-ho abandon the event, and run to the dorm room where an elaborate alarm has been triggered. The alarm proves that someone was trying to tamper with Sun-ho’s laptop. But who was it? No one is in Sun-ho’s room when he gets there, but his adorable family photo has been shattered in its frame. Just then Dong-man gets waylaid by someone… it’s his friend and partner, Chul-jin. Wait a sec! Is this red herring #3, or did the entire plot just get a whole lot deeper? 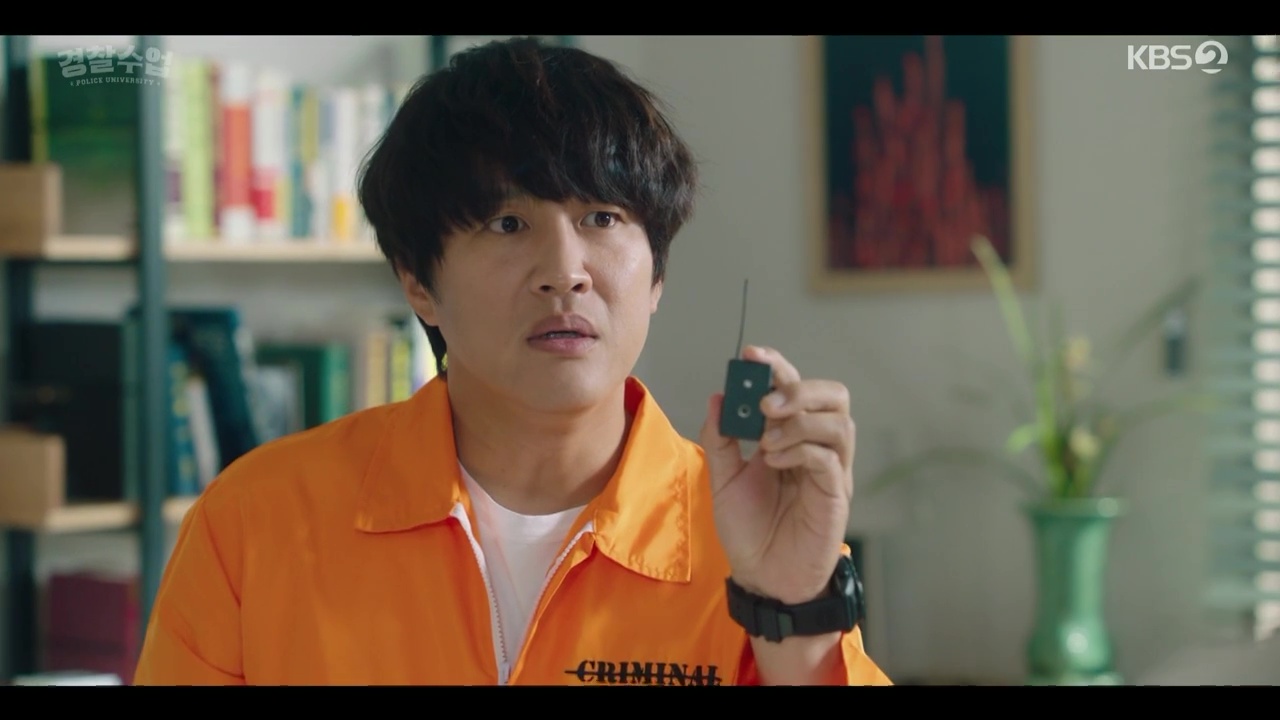 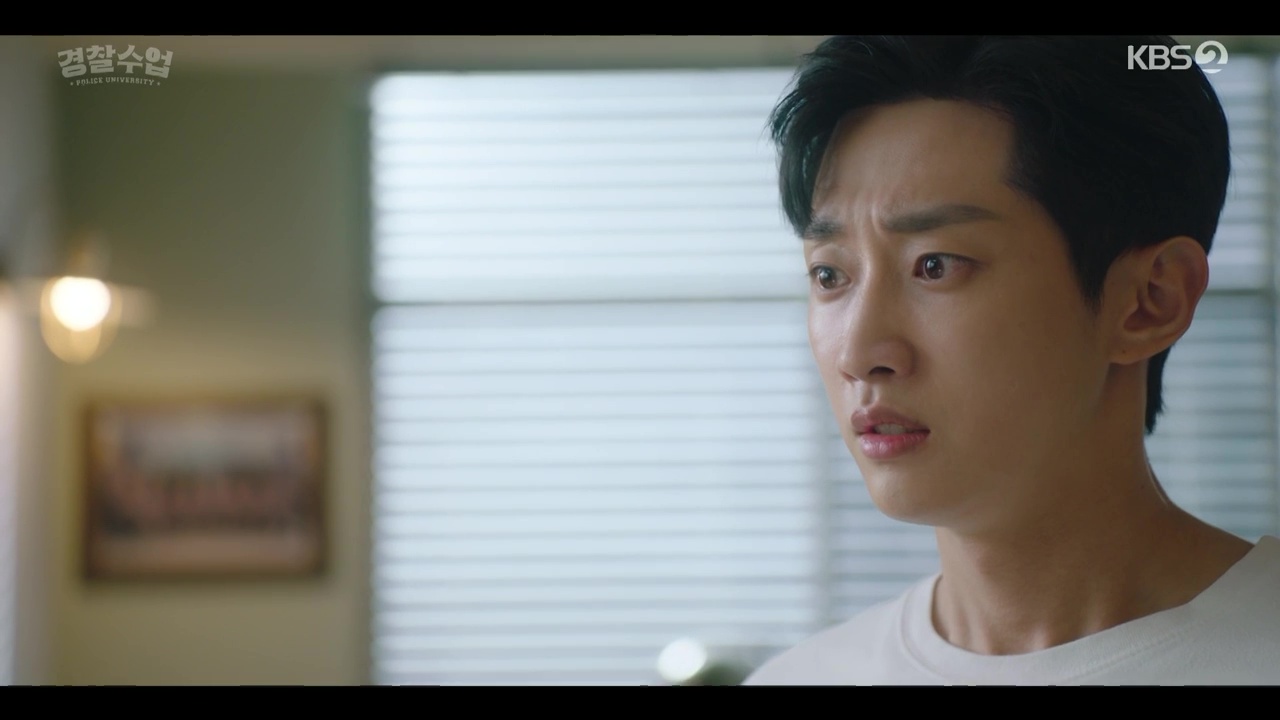 To make things even more complicated, our episode leaves off in even more of a knot. Not only is Min-gyu confessing to Kang-hee and giving her the leave days, but Kang-hee is taking out her anger on Sun-ho. Finally, when Dong-man and Sun-ho are debriefing in his office, Dong-man accidentally spots a bugging device under this desk. He freezes in horror and signals Sun-ho to stop talking. Everything makes a whole lot more sense now — why their investigation keeps getting hampered and tied up before they can really get to the facts.

The thickening plot is a lot of fun, from the gambling ring mole at the school, to the mess that Sun-ho finds himself in with Kang-hee. I was also really glad to see the extra context we got about Dong-man’s pig-headedness this week. In seeing a bit of his backstory, we learn that his fiancée, also a cop, was killed during their investigation. His anger and stubbornness make a whole lot more sense now, and I’m glad the drama offers up these moments alongside the silliness and hijinks. 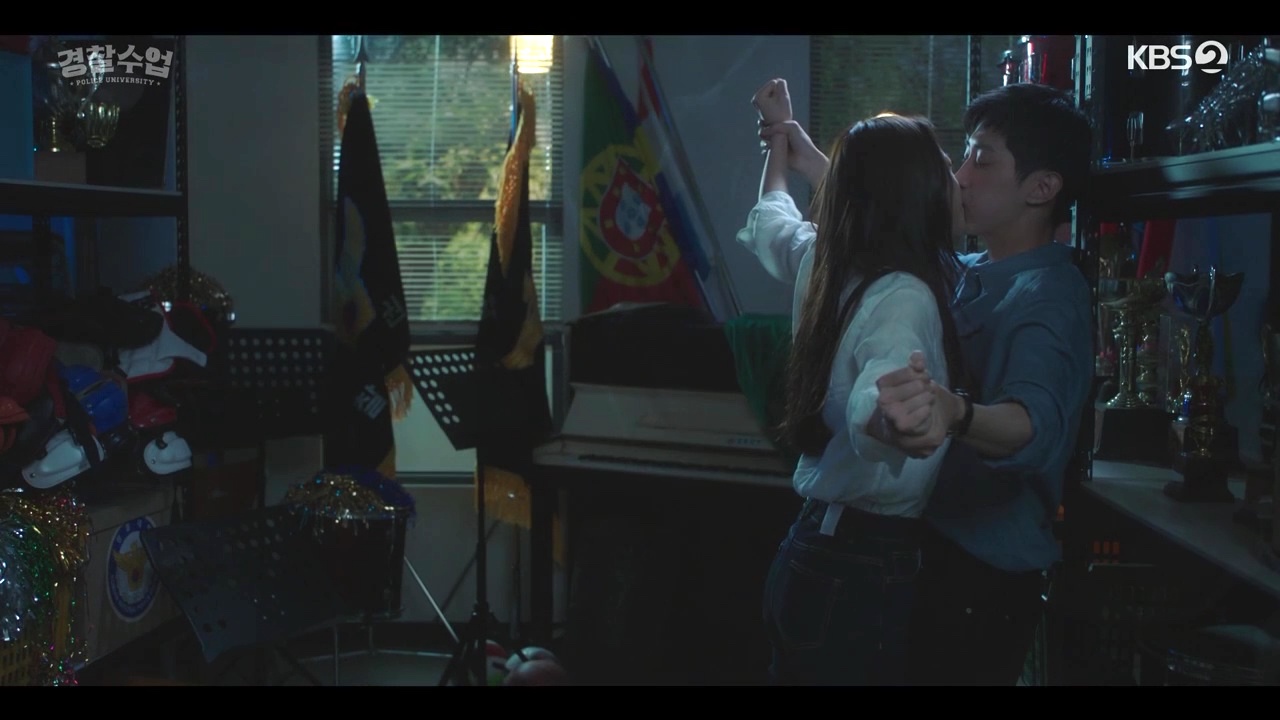 So I really enjoyed these last two episodes. This drama is getting better and better. I laughed a lot. Sun Ho drunk screaming Kang Hee's name repeatedly was hilarious. Also the song they played for KH and SH's romance drove me crazy in the beginning because it sounds exactly like Troye Sivan's song What If in the beginning.

That "comedy didn't work for me. I mean our couple was fine, but the hall monitor was way overdone and her character is turning into a liability for the show.

It's better than the first 2 episodes.

But for a genius, he could have thought of leaving his computer camera on to catch the bad guy instead of running like that...

Thank you, @missvictrix, for the weecap! I really love the show. I've seen Krystal in more than one drama and she usually plays the spunky girl(friend) - except in Prison Playbook. Tho Kang-hee testified in her mother's trial, she's still worried for her. And I think her mother's gambling will be connected to what Dong-man and Sun-ho are trying to uncover.

I definitely think there will be a connection as well!

Do you get the impression they purposefully hired look-alike actors who somewhat resemble big box office stars? Especially "I'm not Cha Tae-hyun."

I am going along for the ride sort of like in TEAM BULLDOG. I wonder if actual KNPU staff are cringing while watching POLICE UNIVERSITY.
(The idea of a 19/20 year old freshman out drinking after curfew with a professor I am sure went over well.)
Of all the students I feel sorry the most so far is Min-gyu. I hope he doesn’t get hardened by all the rejection he is getting right now.