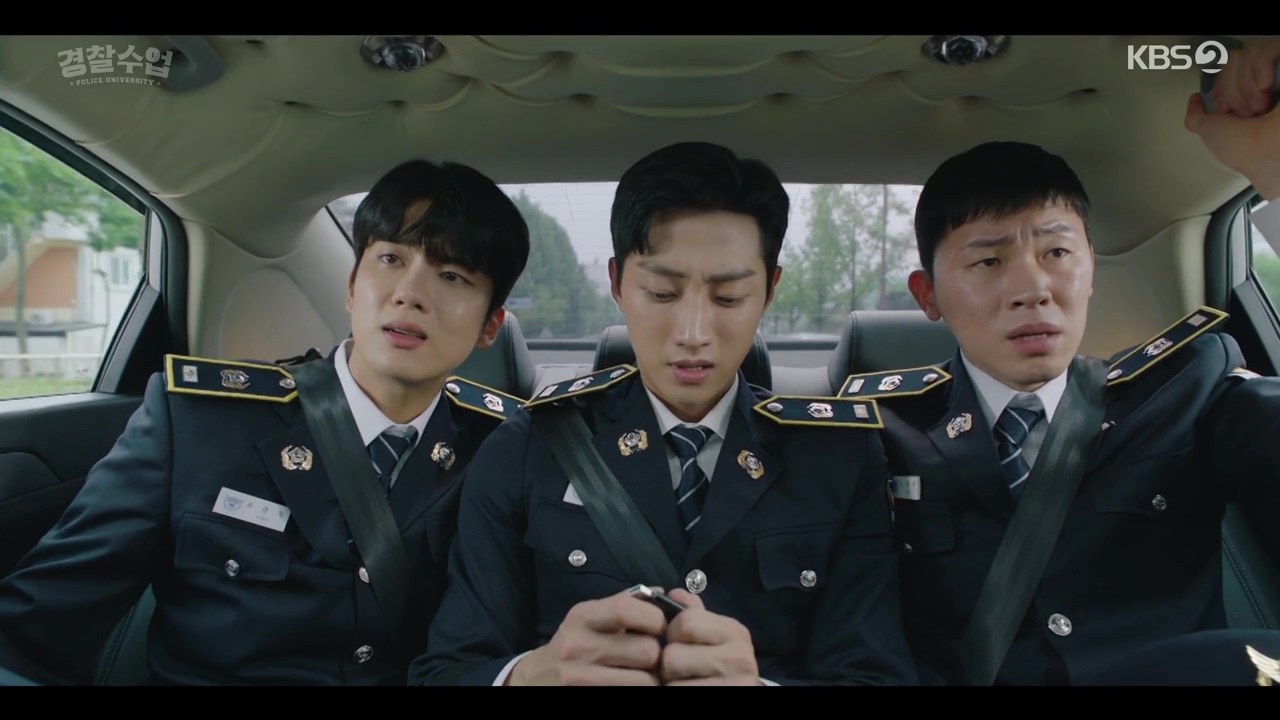 With proof that the culprit is closer at hand than they thought, our cop and cadet face a lot of turmoil at the university. And in addition to turmoil, there’s pressure. Whether it’s pressure from the higher-ups around them, or the pressure they put on themselves, our duo have a lot on their plate this week. 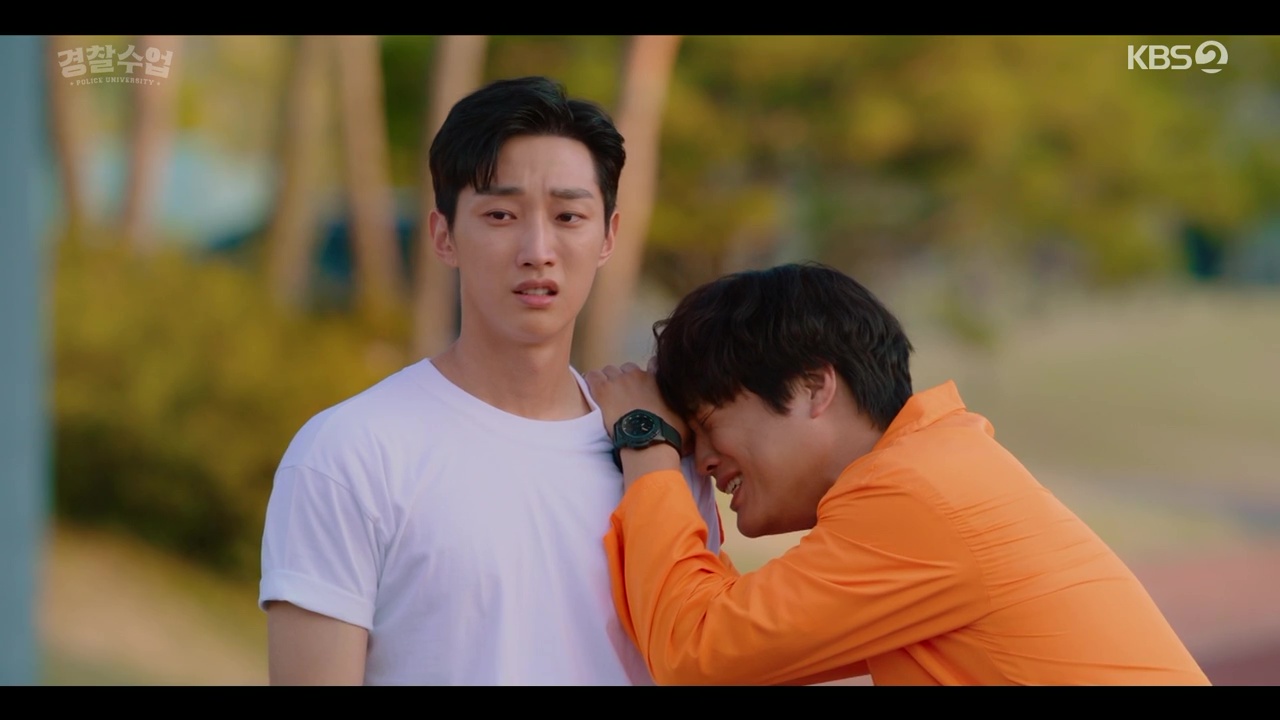 With the bug discovered in Dong-man’s office, Dong-man and Sun-ho realize how close at hand the culprit really is — but the truth is hard for Dong-man to accept, because everything is pointing right at Chul-jin.

The wire-tapping device might get accidentally crushed in the road, but that doesn’t stop Dong-man and Sun-ho in their investigation. From the laptop breach to the phone logs to the fingerprint analysis, they are pushing forward to find more clues.

What makes this plot line more interesting, though, is that it’s about what’s at stake emotionally for our cop and cadet. Dong-man is having a hard time facing the fact that his partner, who’s like a brother to him, could be behind all of this, while Sun-ho is worried about possible repercussions on his family. 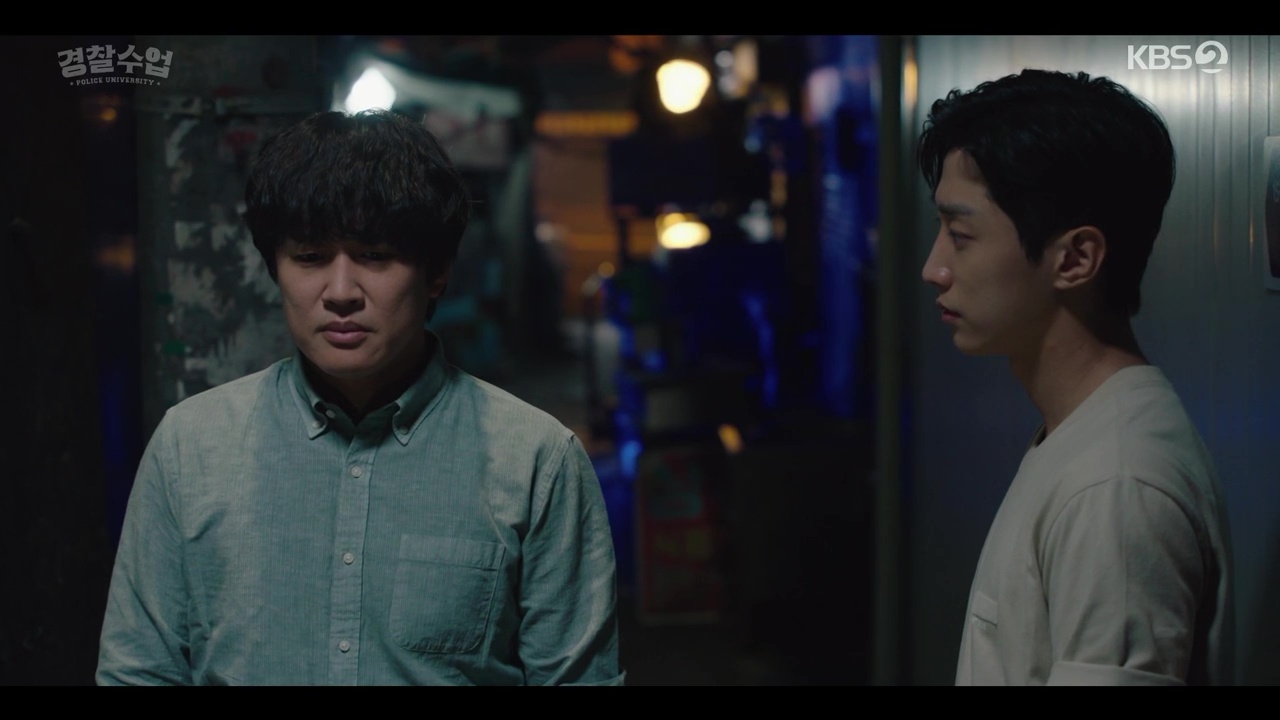 Dong-man might scoff at Sun-ho, but he treats his worries as legitimate, and seems to realize that the case really is serious and perhaps they’re not as safe as he thought. He tries to ice Sun-ho out (to keep him safe), but Sun-ho won’t give up that fast — especially with his proof against Chul-jin.

Sun-ho is also motivated by Kang-hee. While attending her mother’s trial with her, he notices a connection between the gambling ring she’s purportedly been involved with, and the very ring he hacked in the past. We could have guessed this was coming, but I liked seeing these storylines pulled together. The more emotional investment there is from our characters, and the more that’s at stake, the better the story gets. 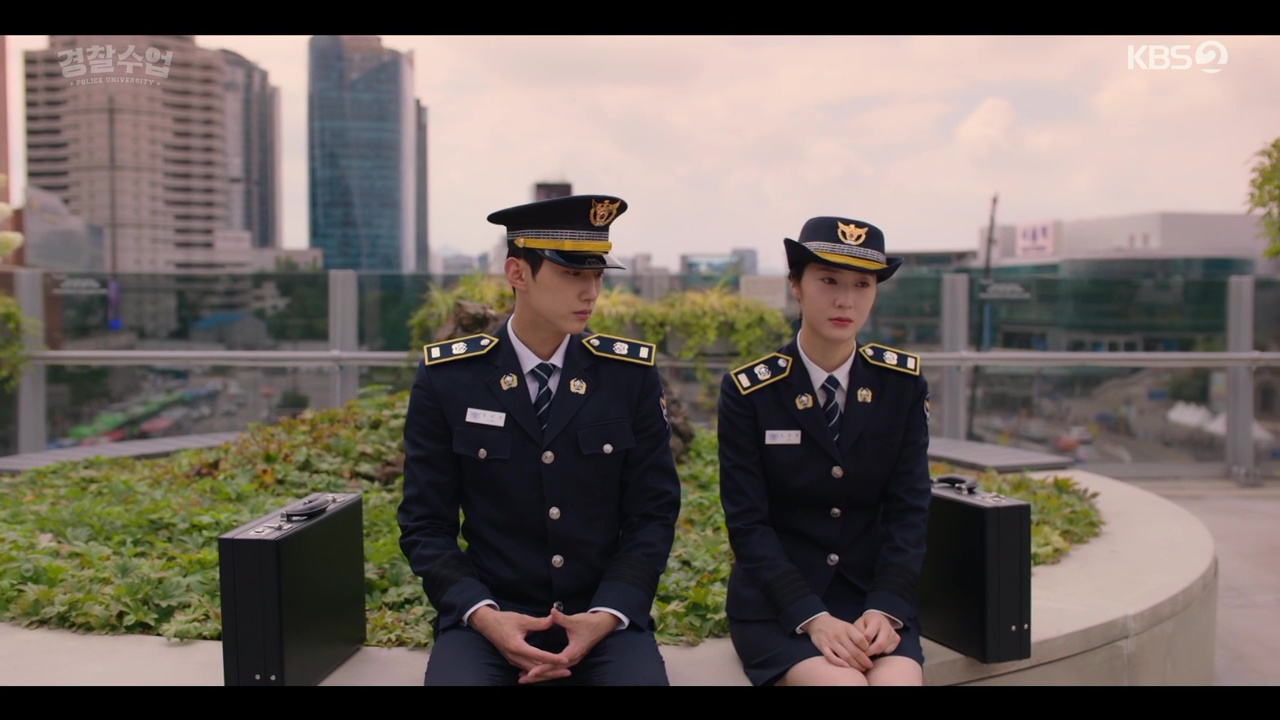 Meanwhile, we start to see a little more of Chul-jin’s side of the story. It looks like he’s being manipulated and strong-armed by someone, and the snippets we overhear make it clear that Dong-man must be stopped from investigating the gambling ring any further.

Then starts our mini case this week, where Dong-man’s exam is leaked to the students, he’s framed via a wad of money in his desk drawer. He’s quickly slapped on the evening news as a bribe-taker and awful human. It’s a little bit over-the-top, but I suppose we can take this as Chul-jin’s way of removing Dong-man from the equation without actually causing him physical harm.

The best part of this whole plot arc, though, is that Sun-ho’s here to save the day. And it’s not just Sun-ho: he’s joined by Kang-hee, Bum-tae, and Joon-wook, who put their all into proving Dong-man’s innocence… even though it’s exam time and all the students are practically glued to the library. 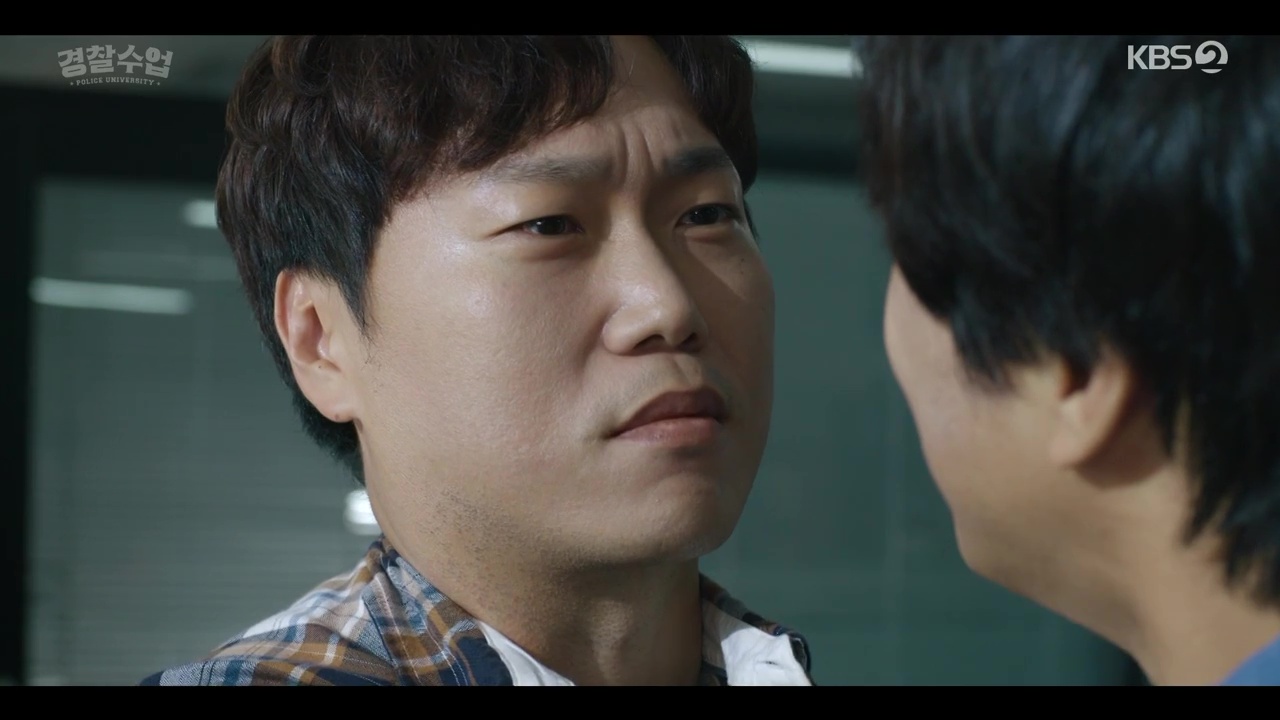 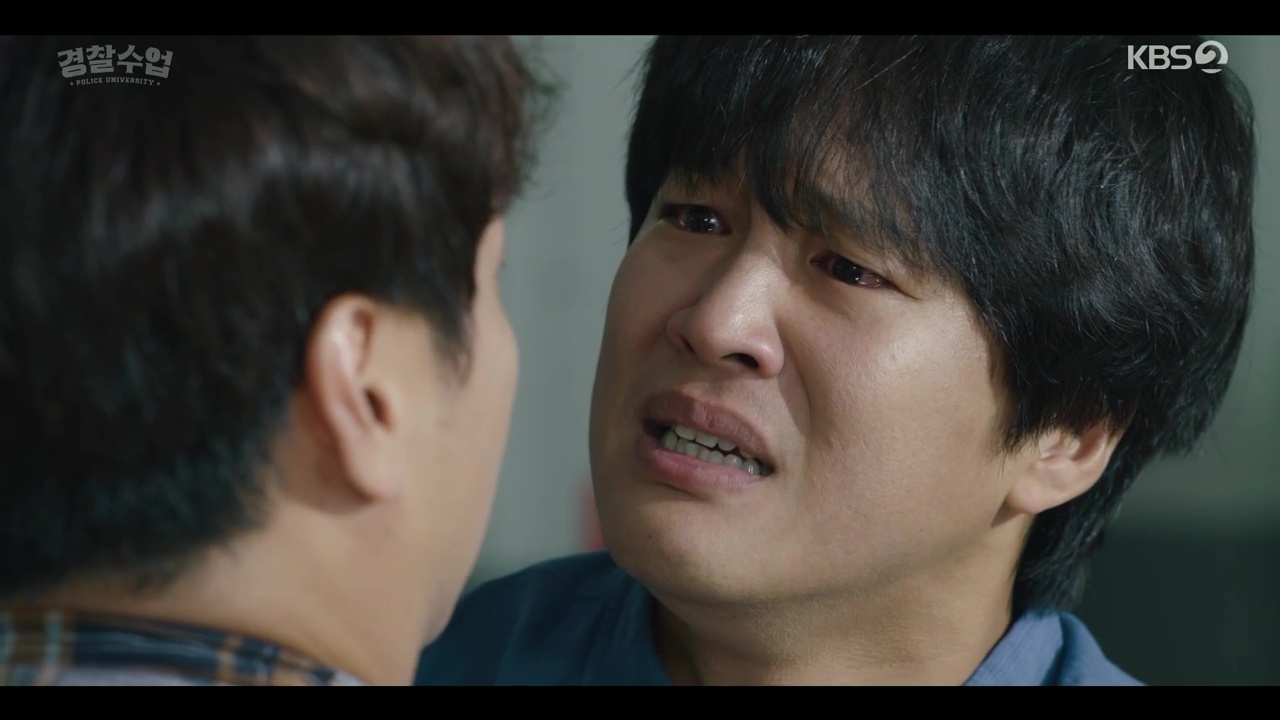 This little plot resolves quite quickly, but it’s all thanks to the kids, and especially Sun-ho, who’s able to reason with Professor Seo and continue his investigation. So, just as Sun-ho rushes into the police station with evidence to prove Dong-man’s innocence, Chul-jin has just arrived as well, admitting that he set up the entire thing.

So what was the point of all of this? It feels like there’s something else going on. Well, there is something else going on, but this plot distraction makes me wonder where the power behind the university (and gambling ring) really lies. I’ve grown super fond of all the faculty by now, so I’ll be endlessly upset if one of them proves to be behind it. 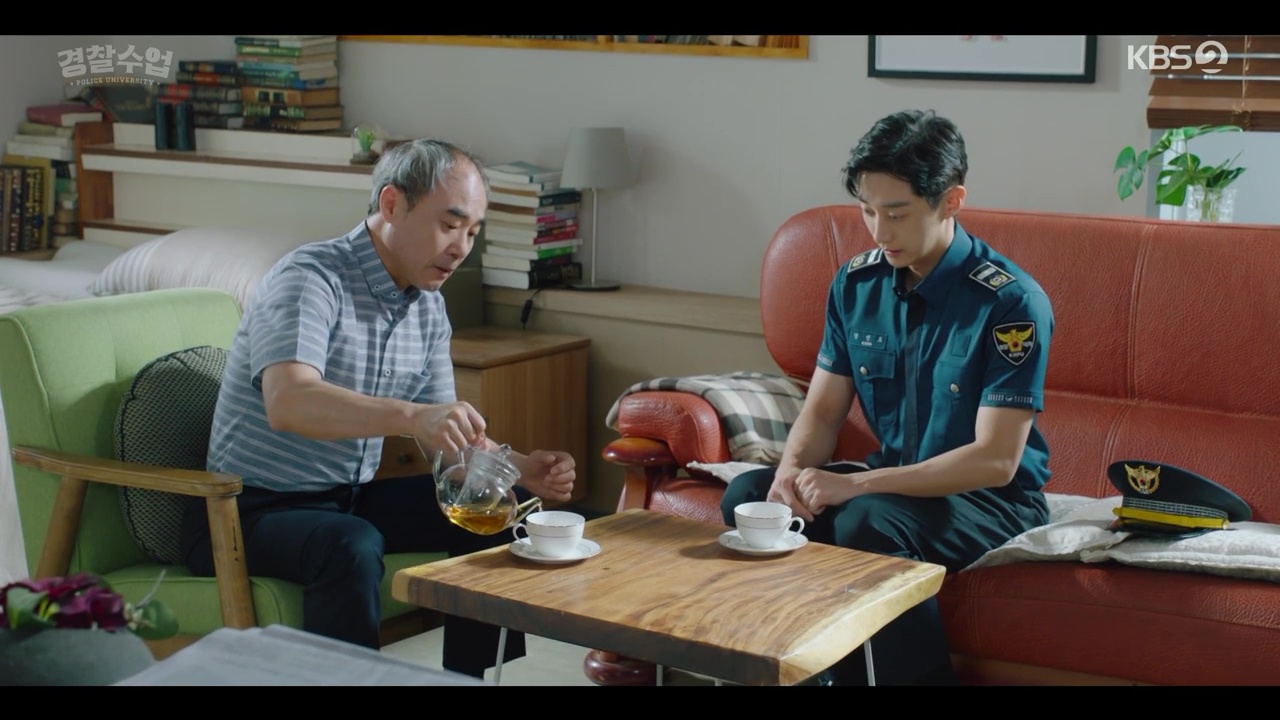 What’s a red herring and what’s an actual clue drop? Is Professor Kwon as harmless as they’re now telling us? Is our adorable Judo expert Hee-soo really that interested in Dong-man? Is Professor Seo (our great Dumbledore-esque leader) truly trustworthy? I hope I’m just borrowing trouble here, and that the crime ring lies elsewhere. But there’s just enough uncertainty around the university to make me wonder.

The students and their cuteness and interactions continue to be the highlight of this show for me. Leading that, of course, is the Sun-ho/Kang-hee romance. Here, they’re leaving us hanging by a thread — or rather, their future romance is hanging by the thread that is the investigation. I’m not exactly sure what’s keeping them from getting together before the investigation is solved, but I don’t really care that much, since I like that the case holds so much meaning for each player. 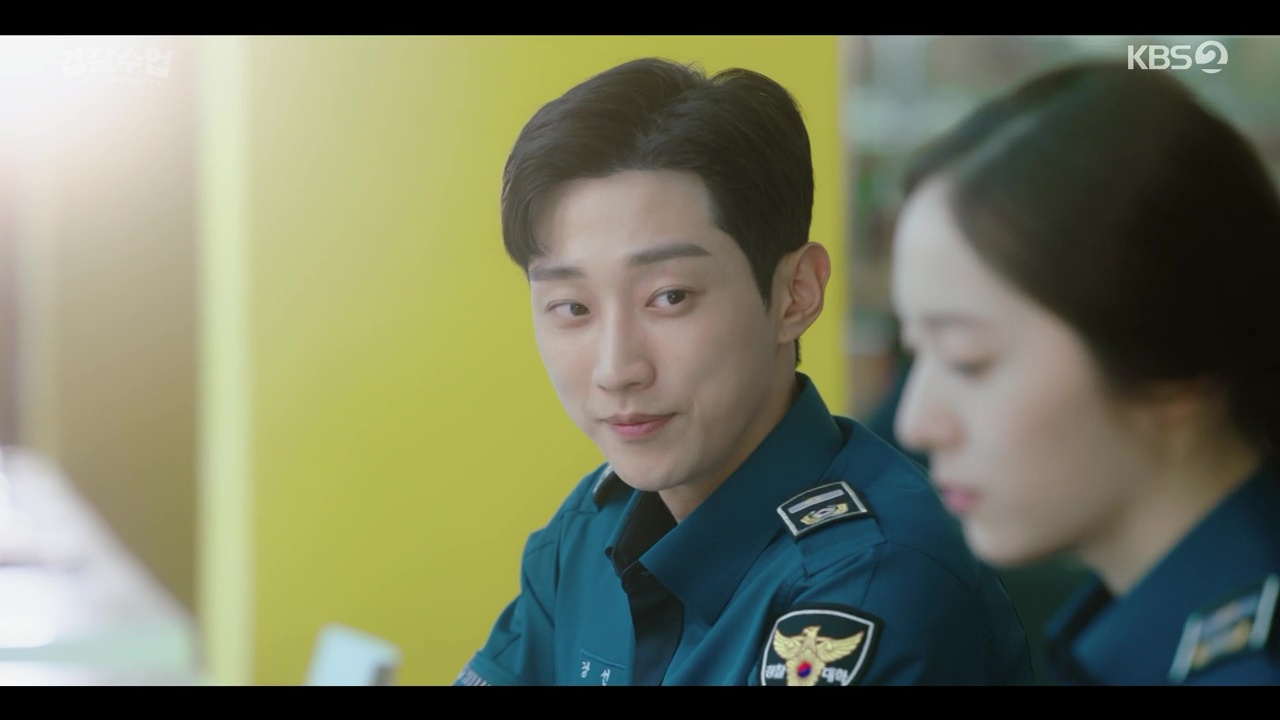 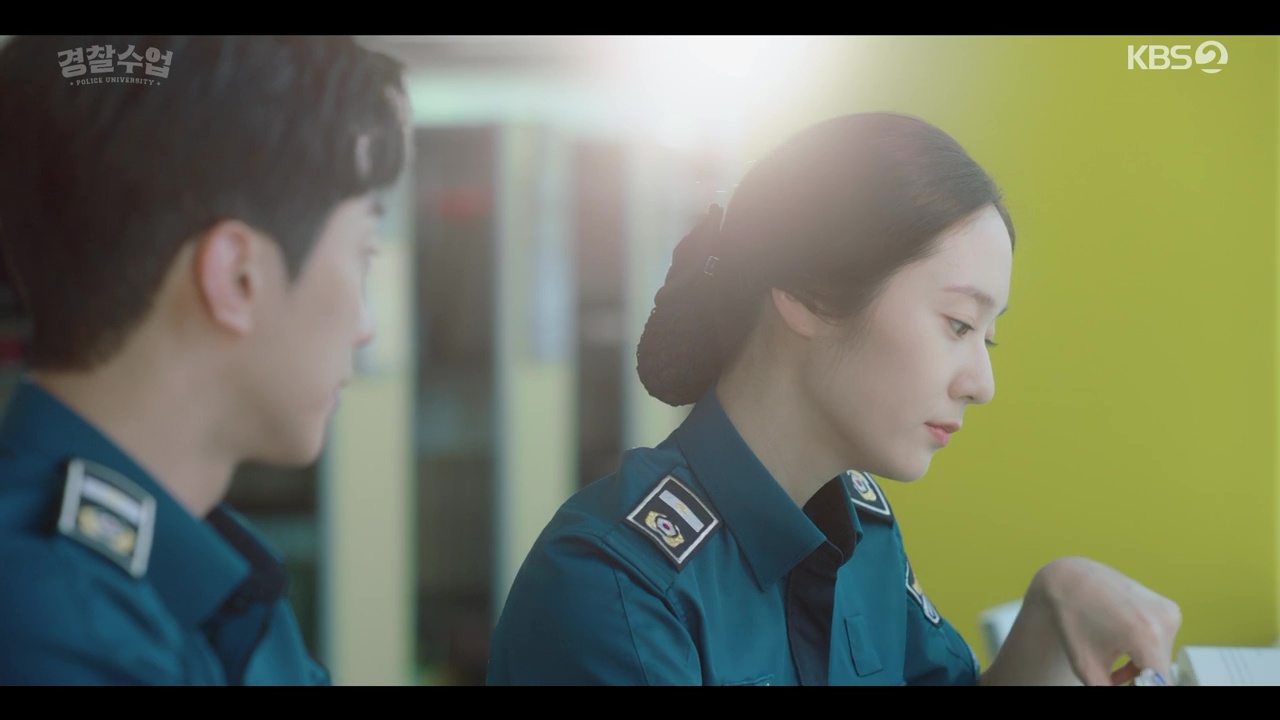 Sun-ho promises to tell Kang-hee everything, but each time he tries, a new layer of this case makes things more complicated. Still, they have a half-spoken understanding between them. Kang-hee knowns how she feels, and we see she turned down Min-kyu (not looking good on that angle!), and Sun-ho basically moons over her whenever he gets the chance. They study together in the library at one point, and he just stares at her with hearts in his eyes.

Lastly, her sleepover at his home, and the way Kang-hee fit in with his family and father, warmed me all the way through. There’s so much sweetness in this story to drink up! As the investigation proceeds, as I expect it will, I’m hoping Dong-man will not only get more help from Sun-ho, but the rest of the crew too. They make such a great ragtag bunch, I’d be willing to follow them anywhere. 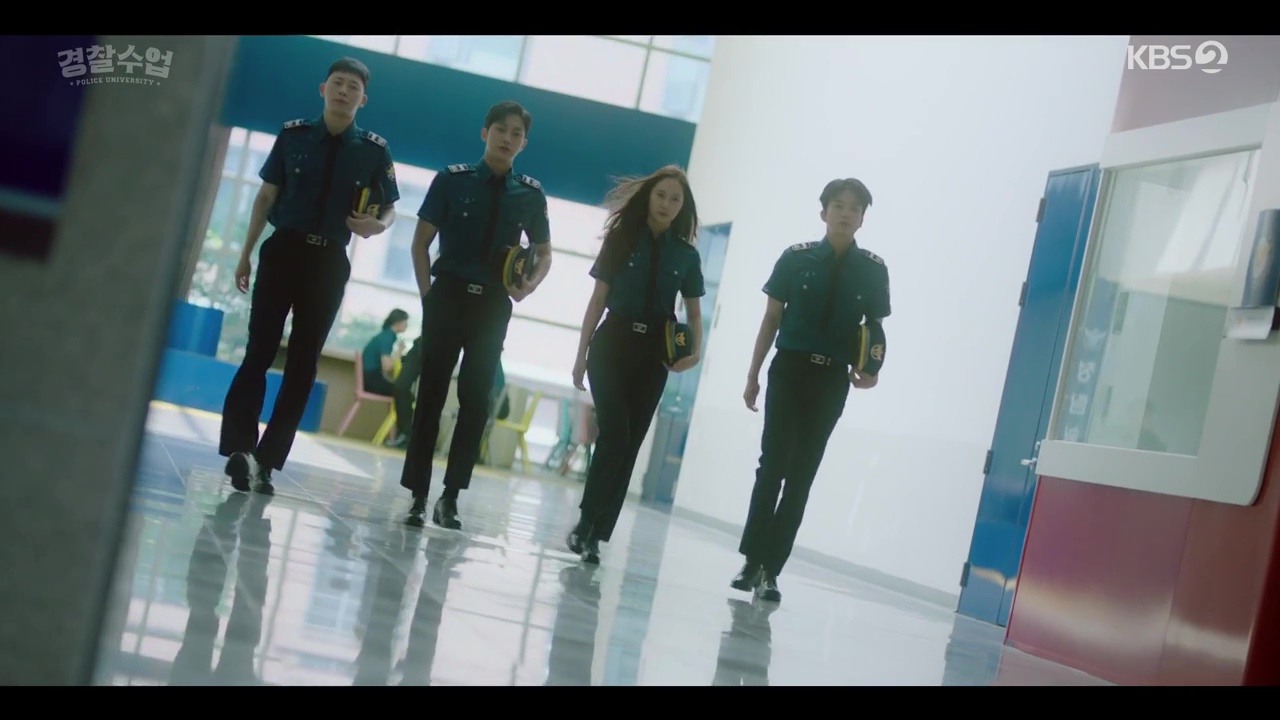 I'm really grateful I got to see this this early. Plz beanies, is there any way I get updates on recaps that faster? I sometimes get mine three days after it was posted and my love for commenting on every post is dwindling. Please help if you can.

Maybe just bookmark https://www.dramabeans.com/blog-view/ and go there a few times a day?

Dong-man is so inconsistent that it's exhausting...

The students are cute.

He’s so annoying, he needs some boundaries with his students. And also just to calm down generally, it’s very hard to believe he has ever been a capable detective, let alone a good one.

Apart from the usual red herrings here and there, ep 7 really scared me. I was so damn sure that something bad was going to happen to Sun-ho. Like how Chuljin left the university for a "check up" after all the students left for a day leave. And then Kanghee and Dad fondly talking about Sun-ho when he was out on an errand (I was so prepared for someone to kidnap him or something because Dad was talking something like Sun-ho being "present" now and all). Like I really thought something was going to happen. Thankfully I was wrong.
And as always, this show continues to be such a heartfelt delightful watch. I just love the friendship, budding romance and of course, the mentor-apprentice relation they have going on. I'm here for them all!

Every time Nice Dad comes into the story I’m super worried something will happen to him and that Sun Ho will be devastated. I’m not very invested in the gambling ring storyline and I think Dong Man is a *terrible* choice for a professor but I just want Sun Ho and Kang Hee to be okay😅

I am so worried about Nice Dad, too.

Thanks for the recap, @missvictrix! I love that Kang-hee turned down Min-kyu this early - it's cruel to let him dangle when she knows there's nothing between them. I can understand why Sun-ho keeps on promising to confess later - he wants to finish what he's doing before he tells her the truth on what he's doing hanging out with Dong-man. And Dong-man wanting to ice Sun-ho, it shows his heart!

Sun ho and Kang Hee are adorable. Kang Hee has something many drama leads lack and that is timing and tactfulness. Her character knows when to employ it and when it is unnecessary. She realized that Sun Ho wasn't related to his dad, but she didn't act weird about it. Adorbs. Dong Man continues to act like a teenager and I don't understand why, you are the adult, so Adult.

The way I see it there are 2 major love triangles on the show:
1. Sun ho-Kang Hee-Min Kyu
2. Sun ho-Dong Man-Jin Chul

This show keeps on being watchable but I sometimes question the way Dong Man conducts his investigations: found a bug? use it to bait the one who planted it! used a laptop for bait, why not turn on the camera? Suspecting your partner with pretty damn incriminating evidence? Why tell him? Sometimes Sun ho made more sense.