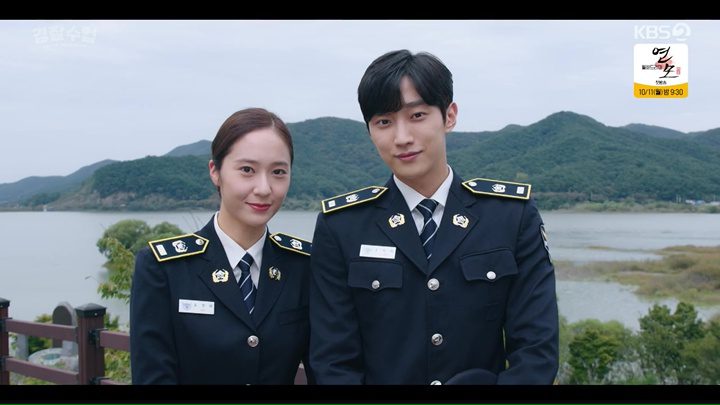 Danger is closer than ever, but it’s nothing the Police University crew can’t handle. In our final batch of episodes, there are confessions and redemption as our cadets end one chapter and embark on a new one. 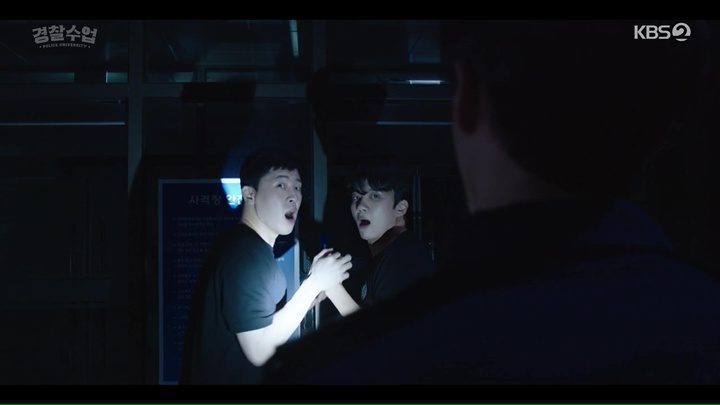 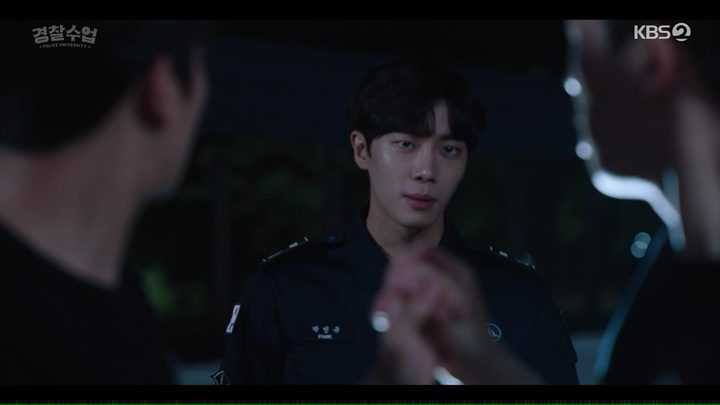 By the time we get into Episode 13, it’s clear that the true culprit has yet to be apprehended. In a lot of ways, we’re back at square one, with the true power behind the gambling ring still shrouded in darkness. Though Dong-man is out of the woods after his run-in with the Truck of Doom, he’s back to seeing his university colleagues in a suspicious light. And as for Sun-ho, he finds himself in danger of having his hacker past exposed by Chief Han unless Dong-man backs off of the gambling ring.

It’s only through some solid investigative skills (and the help of friends) that Dong-man and Sun-ho unravel this tangled web of lies and corruption. Kang-hee devises a plan with Bum-tae and Joon-wook providing support, despite knowing that they risk expulsion if caught. Their mission: See if the keycard that Barcode Baddie gave Sun-ho actually works at the campus shooting range. But things goes sideways quickly when Min-kyu catches the boys in action during a patrol. A disciplinary hearing is called and though things look dire for them, Bum-tae and Joon-wook hold their silence. 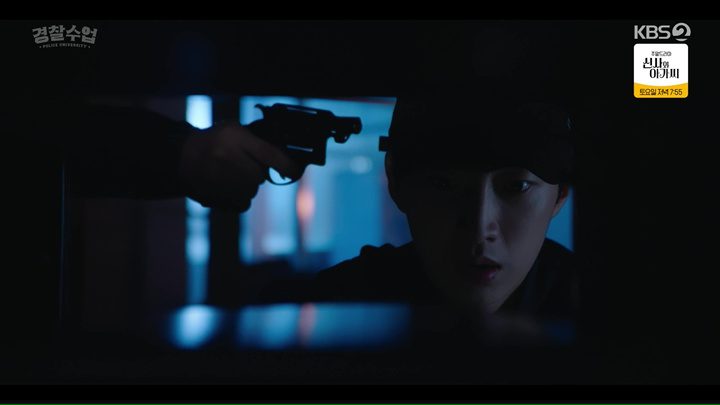 But that’s all part of Kang-hee’s bigger plan. She’d asked Min-kyu to “catch” the boys in order to get a disciplinary hearing started. With all the professors preoccupied at the hearing, that buys time for Sun-ho to sneak into the shooting range and search for evidence. There’s a locked safe and with his handy hacking skills, he cracks the password in time and finds a trove of documents. When Barcode Baddie emerges (with a gun pointed straight at Sun-ho), Kang-hee comes to rescue with a taser gun.

Dong-man arrives at the hearing, straight from the hospital. He strides into the disciplinary hearing and claims he told the cadets to check the shooting range and that it’s a matter for him to solve. It doesn’t stop Sun-ho and the gang from being punished, and Sun-ho’s punishment is the most severe: indefinite suspension. But it seems a small price to pay considering how much Dong-man and company have acquired.
The most important piece of evidence is a ledger full of names, affiliations, and amounts of money paid out. Chief Han is in there as receiving the most money after a mysterious Joo Jae-il (who has no affiliation listed). Chief Han is searching for the ledger too, and when he learns nothing of the sort was recorded as being found, he maneuvers to get Sun-ho arrested as an accomplice of the gambling ring leader. 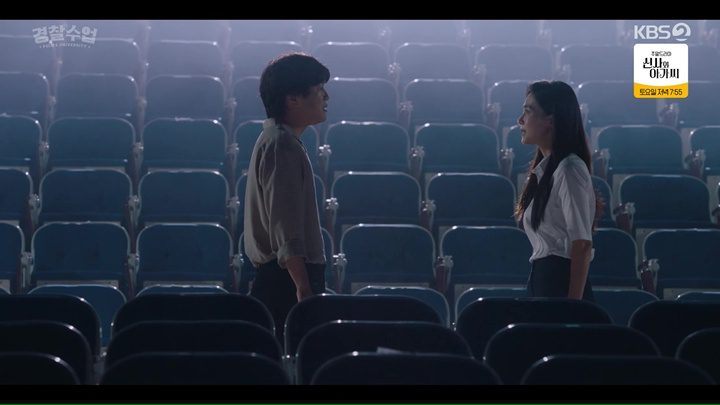 Dong-man’s faithful hoobae, Officer Joo, sits with Sun-ho and the ledger. It’s obvious she trusts Dong-man and Sun-ho, so when Sun-ho asks to borrow a laptop she actually gets one to him. In no time at all, Sun-ho tracks down Joo Jae-il and Officer Joo passes the information on to Dong-man.

With Sun-ho in custody, Dong-man makes a beeline for his prime suspect, Hee-soo. But she’s strangely calm in the face of his accusation. She neither confirms nor denies his suspicions. Instead, she tells him not to think about why the gambling ring started a foundation, but why the foundation bothered creating an illegal gambling ring. Following that thought process will lead him to the real culprit.

Dong-man stands in front of Joo Jae-il, which is a factory (Joo being an abbreviation for corporation). It’s at the Jae-il factory where Dong-man pieces together the final truth of who the mastermind is behind this all: Professor Seo. 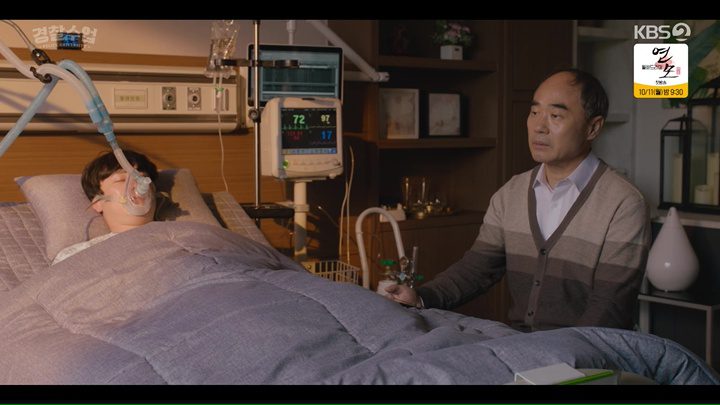 It’s heartbreaking to learn what prompted Professor Seo to start this all in the first place, and there are parallels to Sun-ho’s initial hacking of the gambling ring for his father’s medical expenses. Professor Seo’s son Min-woo had once been an accomplished officer, but a terrible accident took place while he was in the middle of arresting a culprit — Professor Go. Min-woo was badly injured and lived because Professor Go rescued him, while his partner, Hee-soo’s husband, lost his life. Professor Seo had started the foundation to take care of injured officers and the families of fallen officers.

Though he hadn’t initially known about the unsavory methods that were being used, once he learned what was happening he didn’t turn himself in either. Hee-soo had realized Professor Seo was the man behind the foundation when Professor Go was arrested, but didn’t feel she could speak up then.

The death of his son Min-woo and the gravity of everything that’s been done in the name of the foundation hits Professor Seo hard. He’s one step away from taking his own life but Dong-man pulls him back from the edge and takes him into custody in time. 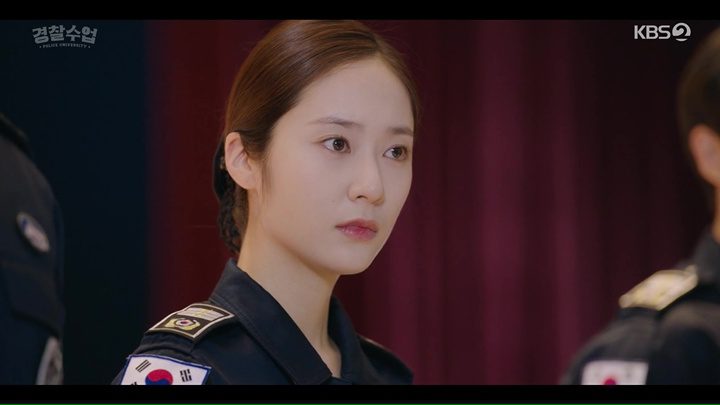 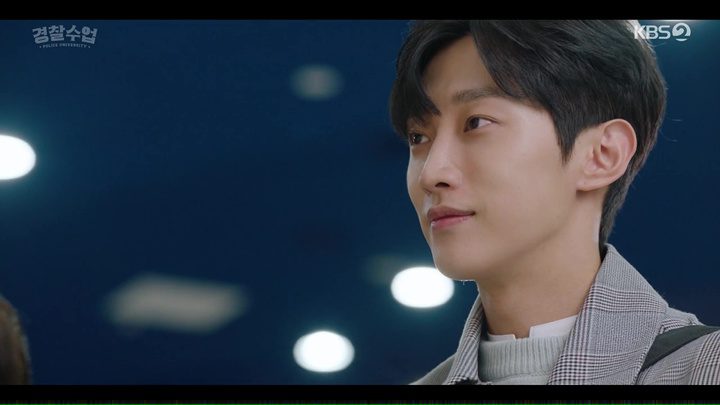 The gambling ring and the matter of Sun-ho’s future in the police force was wrapped in a satisfyingly neat way. All parties involved confessed and admitted their wrongdoings (minus Chief Han, but you can’t expect a zebra to change stripes). Sun-ho decides to follow his conscience. He un-enrolls from the university and confesses to his hacking of the gambling ring. Although there’s no longer any evidence from the crime, he returns the money (thanks to the Bank of Dad and Seung-bum having never spent a cent) and helps repay his debt to society by creating a tracking program to stop hackers.

A handy two-year time jump brings us the final year for Sun-ho’s cohort, minus Sun-ho of course. As the soon-to-be graduates return to campus for their final year, they’re about to start basic training for the freshman class. And whose hand goes up when Professor Kwon asks for volunteers for leaders? Sun-ho. Thanks to an administrative tactic by Professor Kwon and Dong-man, Sun-ho’s first acceptance to the university had been canceled, thus clearing the path for Sun-ho to return to the school and become a police officer. 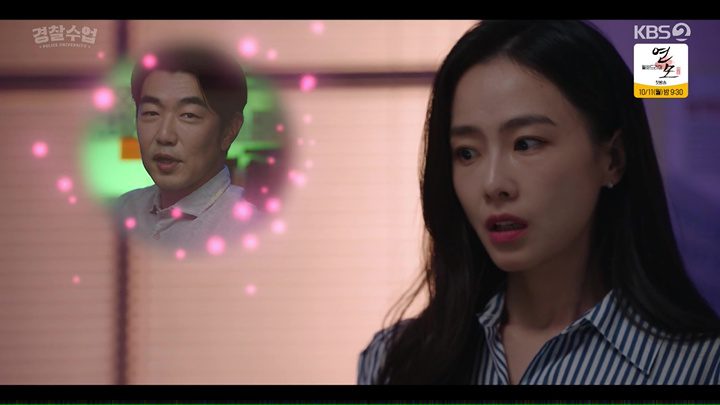 It was a sweet ending to a drama that ended up being about more than just aspiring police officers and crime. The show wasn’t perfect, but there was a lot to love and be moved by.

One of the few nits I have to pick are how nearly everyone ended up paired off. It was a little unnecessary, but I also hope Hee-soo and Professor Kwon have a long and happy life together. Another nitpick was regarding the Kang-hee and Sun-ho break-up, because they were better as a happy couple than in angst mode. (That Truck of Doom fake-out with Sun-ho made the break-up almost worth it, though.)

From Sun-ho, to Jin-woo and Professor Seo, Police University taught us that though you can’t undo your mistakes, your past doesn’t make you irredeemable. Even though you might have gone too far down the wrong path, there’s always a way back. 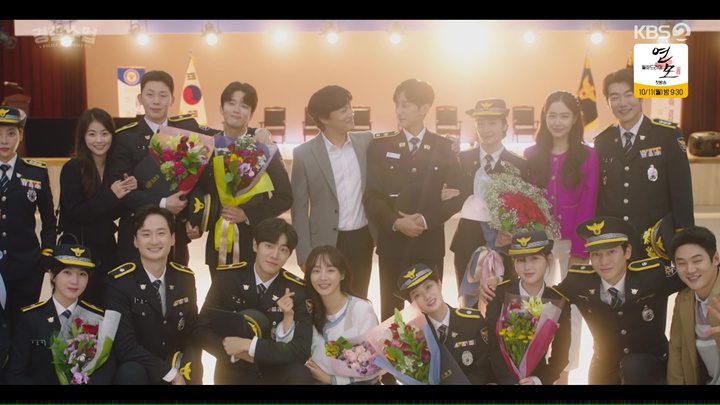 @stroopwafel Please add with a "Final" since Police University had 16th and final episode already and I knew the revised title will be: Police University: Episodes 13-16 Open Thread (Final)

Just cuz I see Jinyoung, who I think is a great music producer and a good singer, I wanted to watch the show, but I didn't last more than like 10 minutes, premise of choosing a career for life cuz girl you like picked that career, not for me

In ML's defense and from my POV, the drama explained why he chose a career based on FL.

Kang Sun Ho was an adopted son and never felt close to his family, din't communicate much with his dad and never had ambition or passion in life. He was just living for each day, but then he happened to see Kang Hee, who appeared not just pretty but also bold and determined to achieve her goals. This admiration turned into a crush and for once in his life, he had a goal, which is to see/impress FL by joining the Police University.

As episodes go by, ML's character wasn't restricted around FL but was shown to investigate with Prof. Dong Man (Cha Tae Hyun) , develop friendship and grow as a person.

Oops I forgot about this show...

I have no idea what to say about this drama, it existed?

It wasn't bad but it wasn't good neither. I didn't really care about the investigation.

I think they should have focused only on the students and not Cha Tae-Hyun's character. Live that was about young cops was way better!

It was fine, nothing special, but I enjoyed it for what it was.

The whole plot regarding the investigation of illegal gambling colinked with a mystery professor from the university, kept dragging and dragging that the fun from 1st 8 episodes lulled😴

This drama could have been great with a 12-episode format,but oh well, we can't always get dramas that are consistent in "entertainment" factor from first episode to last.

Atleast I enjoyed all the characters and the series ended on a good note.