A group of mothers from a privileged neighborhood come together around their children's schooling, but there are secrets that lurk behind every smile, and each of the women hides a past.

A group of mothers from a privileged neighborhood come together around their children's schooling, but there are secrets that lurk behind every smile, and each of the women hides a past. 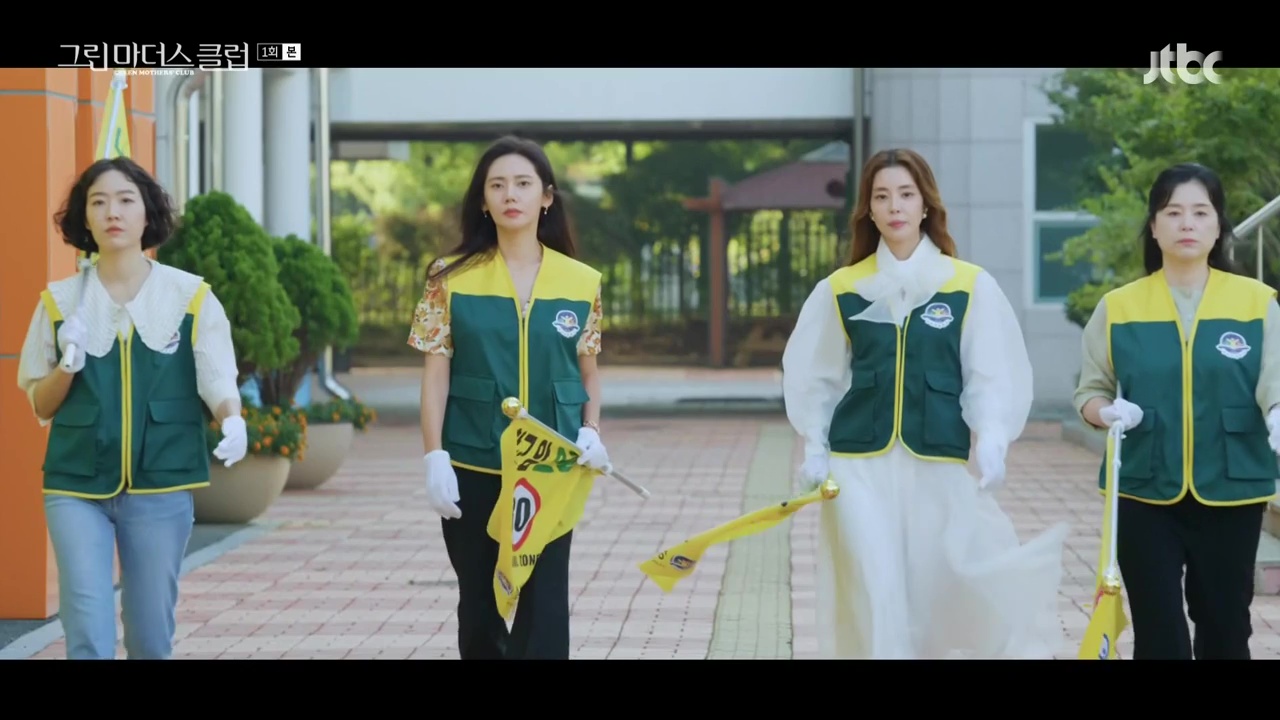 Secrets and suspicions are the name of the game in Green Mothers’ Club, a drama that says it’s about friendship and motherhood but hints at a darker edge underneath. Our protagonist is trying to create a new beginning for herself, but that’s kind of hard to do when your past shows up right where you least expect it. 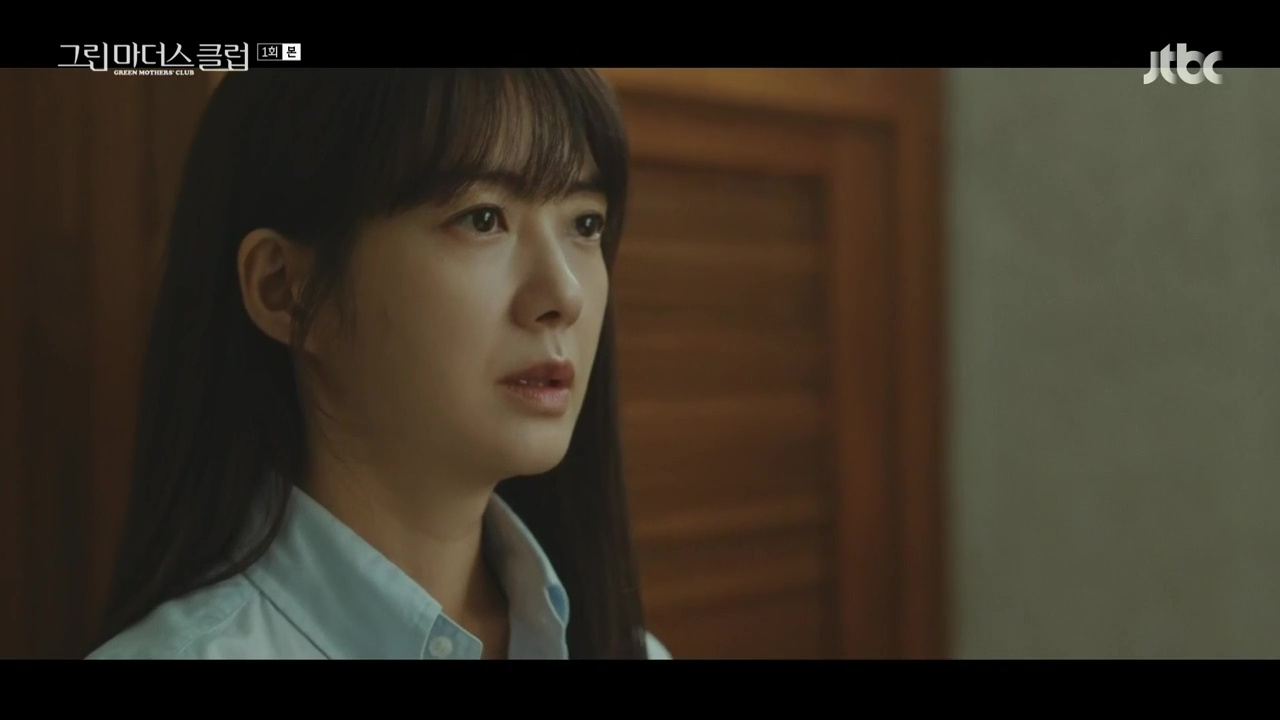 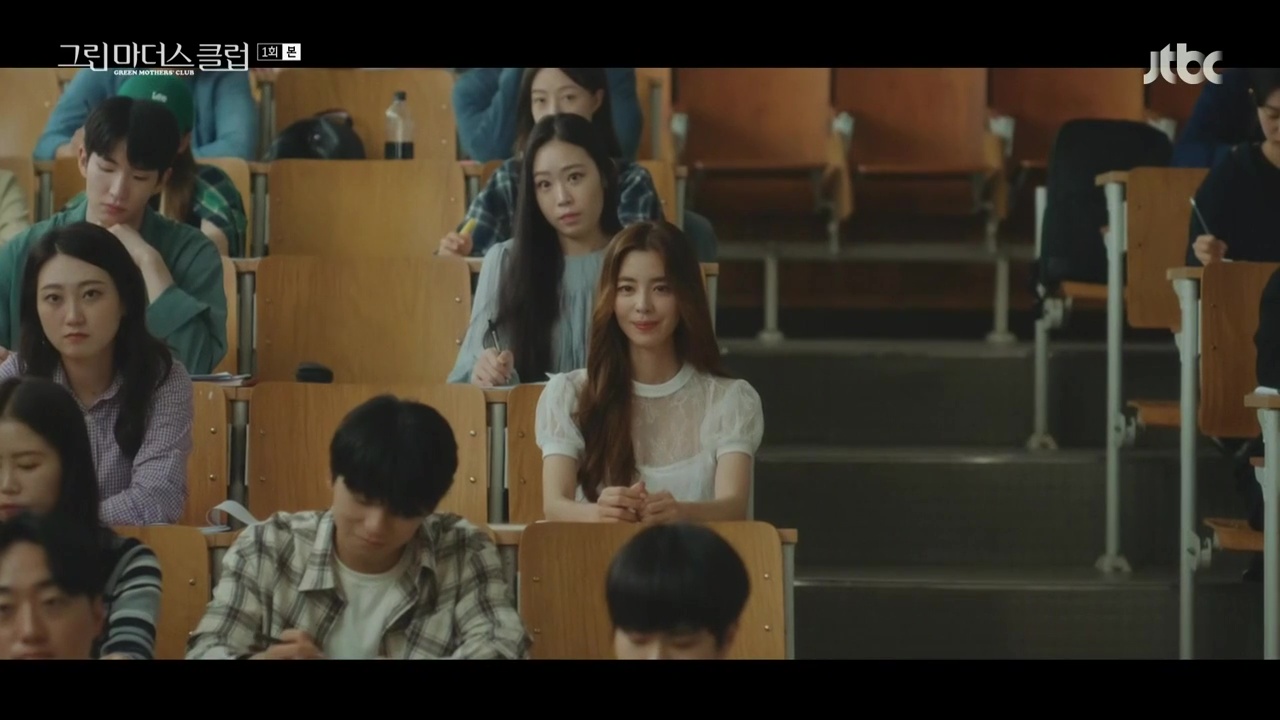 Right from the start, the tone of this show caught me completely off guard. It’s a lot moodier than I expected, and there’s something deeply unsettling simmering under the surface – something other than just your typical tiger mom’s determination to see her kids come out on top, I mean. And I’d say that’s a good thing! Right away, my interest shot way up.

We’re introduced to the almost creepy atmosphere and to our main character, LEE EUN-PYO (Lee Yo-won), through a dream sequence wherein her university lecture is interrupted by the appearance of another woman sitting among the students. 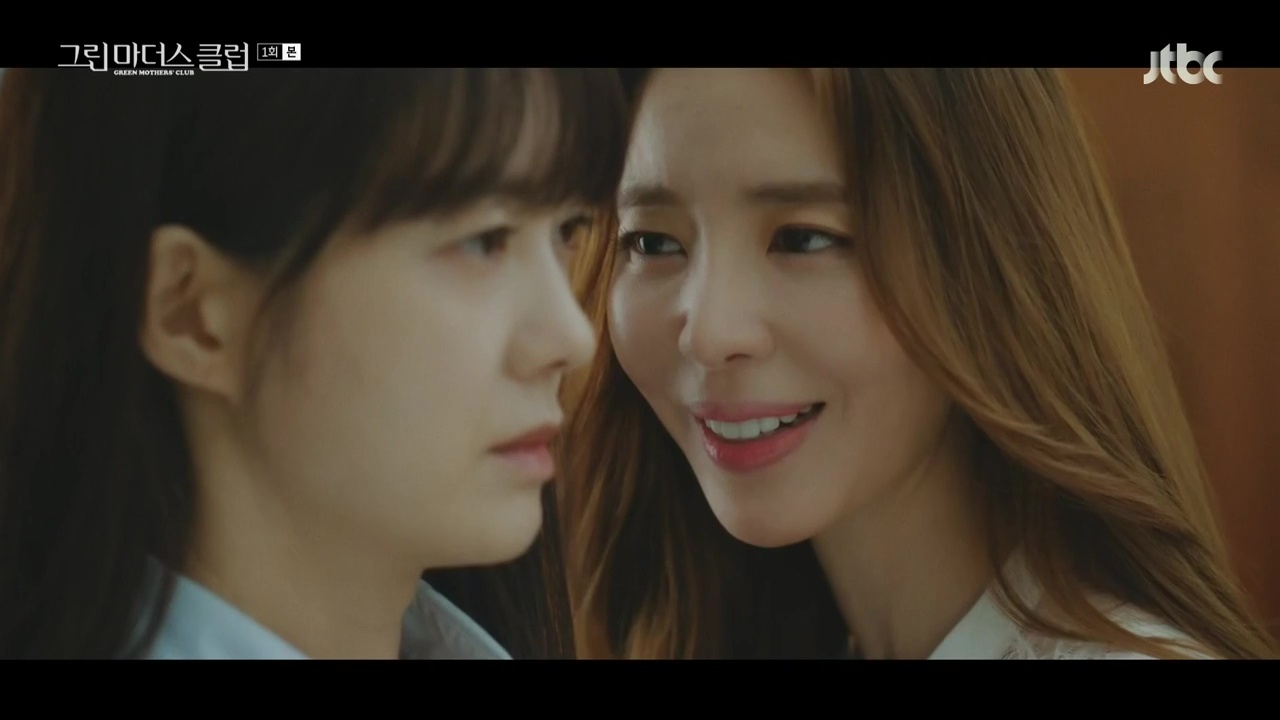 The other woman starts off friendly, but then jeers at Eun-pyo as all the other students vanish. Eun-pyo seems terrified of her, and eventually full-on attacks her, ending the dream.

Throughout the episode, we’re given enough hints to guess that the dream is rooted in reality, though exactly how closely isn’t totally clear just yet. Eun-pyo, we learn, was on track to become a professor, but when defamatory accusations against another professor were (unintentionally, she claims) published online, she was forced to quit. That led her to move to a new home, in the same neighborhood as the rest of the moms in this story. 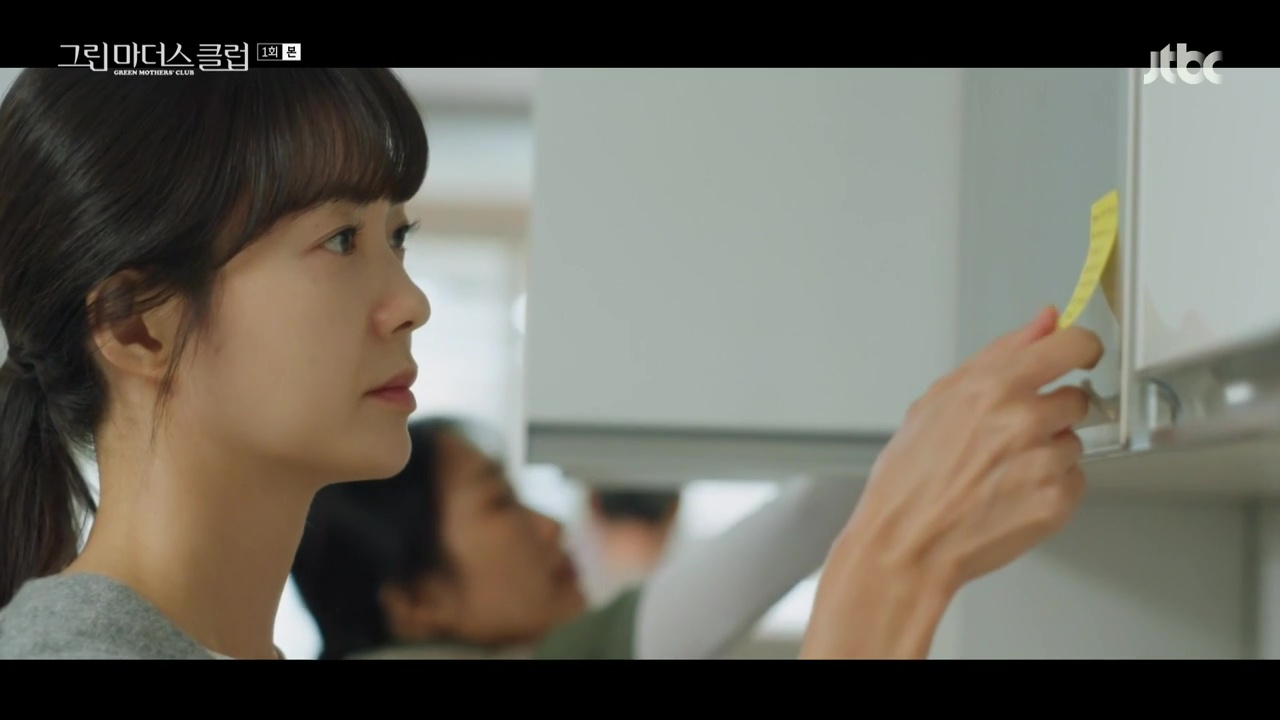 The title of this first episode is “Not All Neighbors Are Good Neighbors,” which of course begs the question: which neighbor here isn’t a good one? The obvious choice is the intimidating BYEON CHUN-HEE (Chu Ja-hyun), the undisputed squad leader, if you will. She lives just next door, and Eun-pyo is warned about her through a sticky note left by her new apartment’s previous tenant.

Though Eun-pyo shares a number of antagonistic scenes with Chun-hee, one scene in particular really solidifies the pecking order of mothers. One of the little girls has a birthday party, and all the mothers are there to supervise and – even more so – chat with each other. Since Eun-pyo is new, her cousin, PARK YOON-JOO (Joo Min-kyung), introduces her to everyone else. 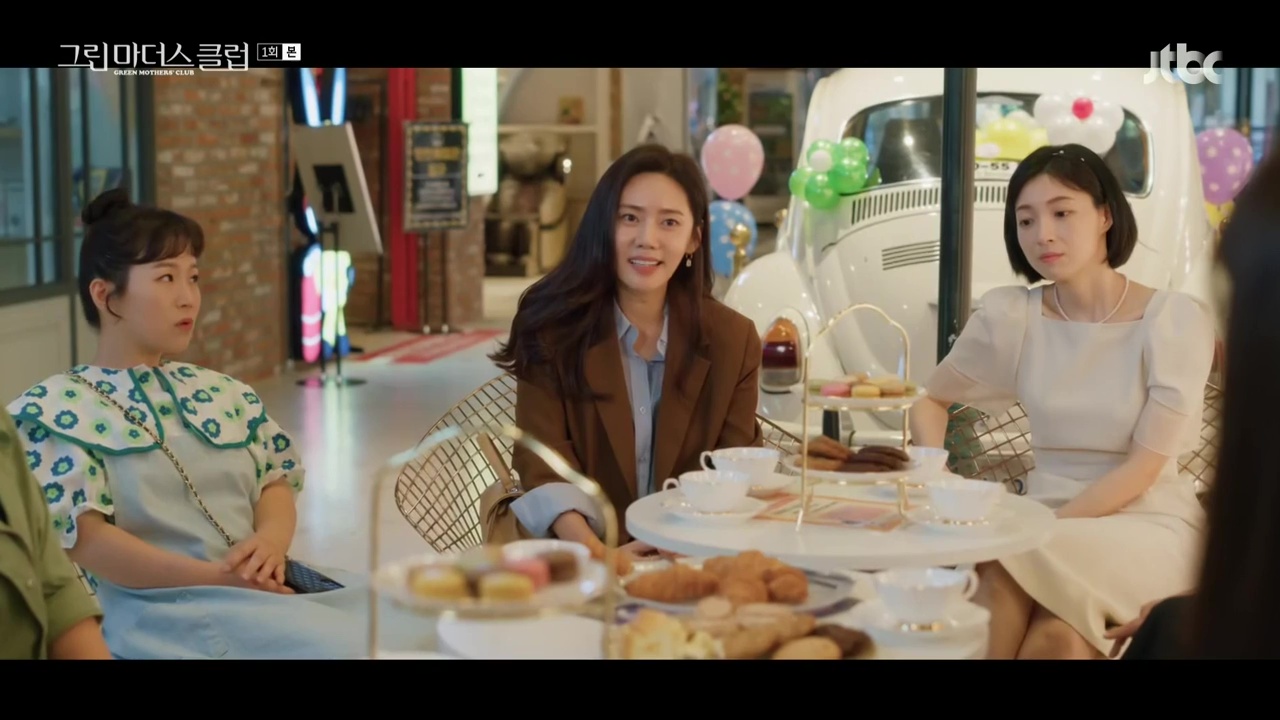 Chun-hee breezes in late, and everyone falls over each other to be the most placating and complimentary. At first, the other mothers are interested in Eun-pyo’s profession and background, but once it’s clear her pointed comments about not wanting to live vicariously through her kids or force them to do extra activities have offended Chun-hee, everyone quickly abandons Eun-pyo – including Yoon-joo.

But there’s one other mom who doesn’t quite fit the mold. Also referred to as “the goddess in the penthouse,” SEO JIN-HA (Kim Gyu-ri) only stops by the birthday party long enough to drop off her son and be fawned over by the others for a few minutes. She’s elegant and mysterious… and also the woman from Eun-pyo’s dream. 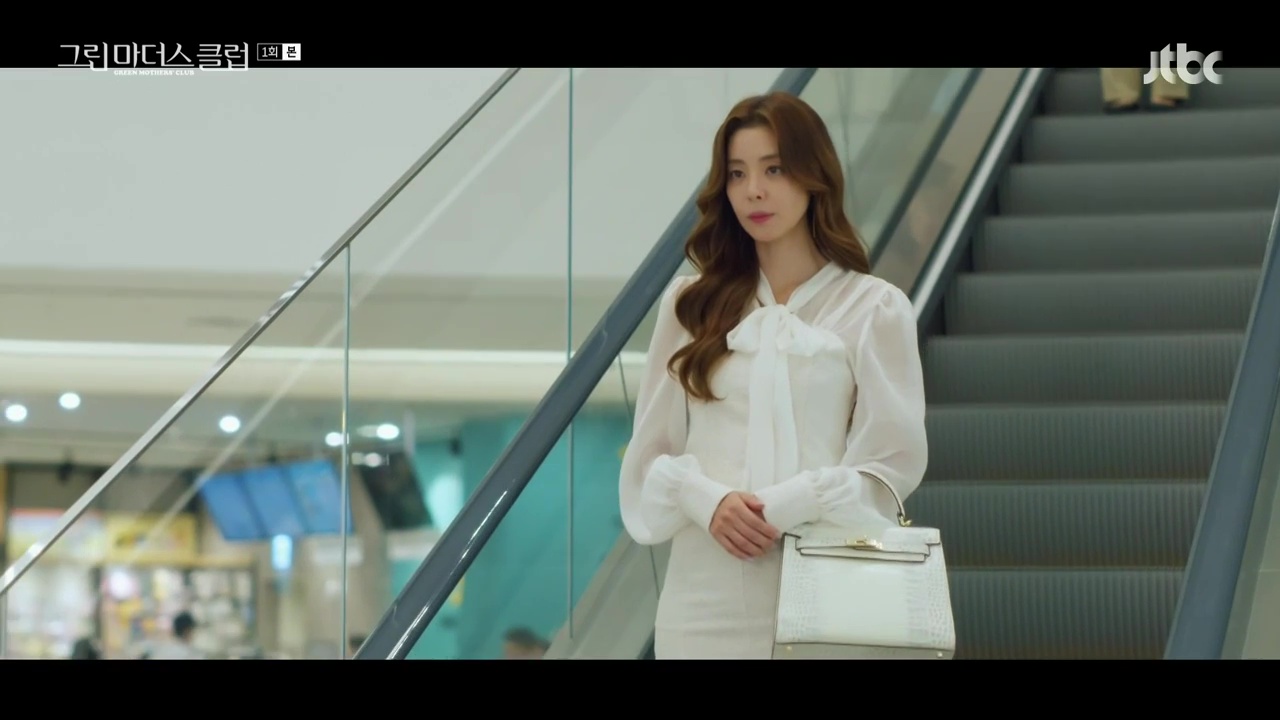 I mentioned that the overall tone of the episode was somewhat unsettling, and Jin-ha ups that unsettling factor by a lot whenever she’s on screen. She has a faraway, almost dreamy look about her, but it’s never quite clear if that’s her actual personality or if she’s putting on an act.

She and Eun-pyo are old friends, having studied together in France along with Jin-ha’s husband, LUIS BUNUEL (Roy). But while Jin-ha displays exuberance upon being reunited with Eun-pyo, Eun-pyo looks almost as terrified to see her in the flesh as she did in her dream. 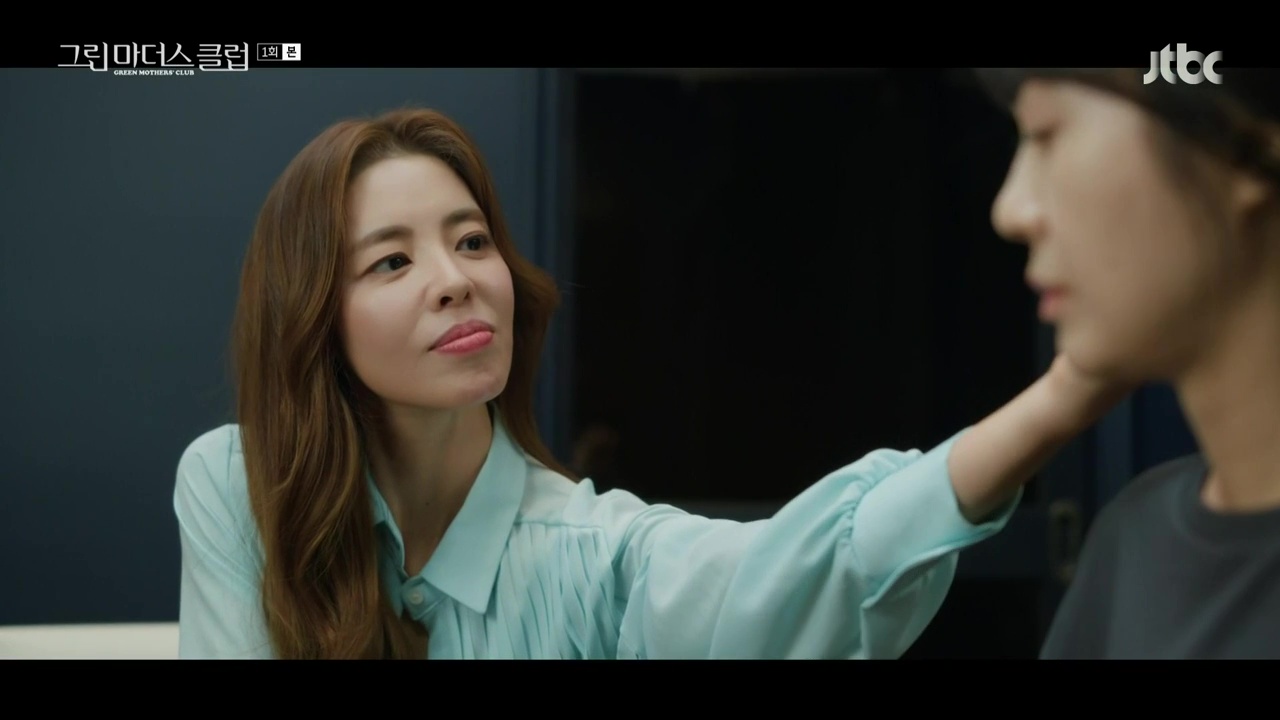 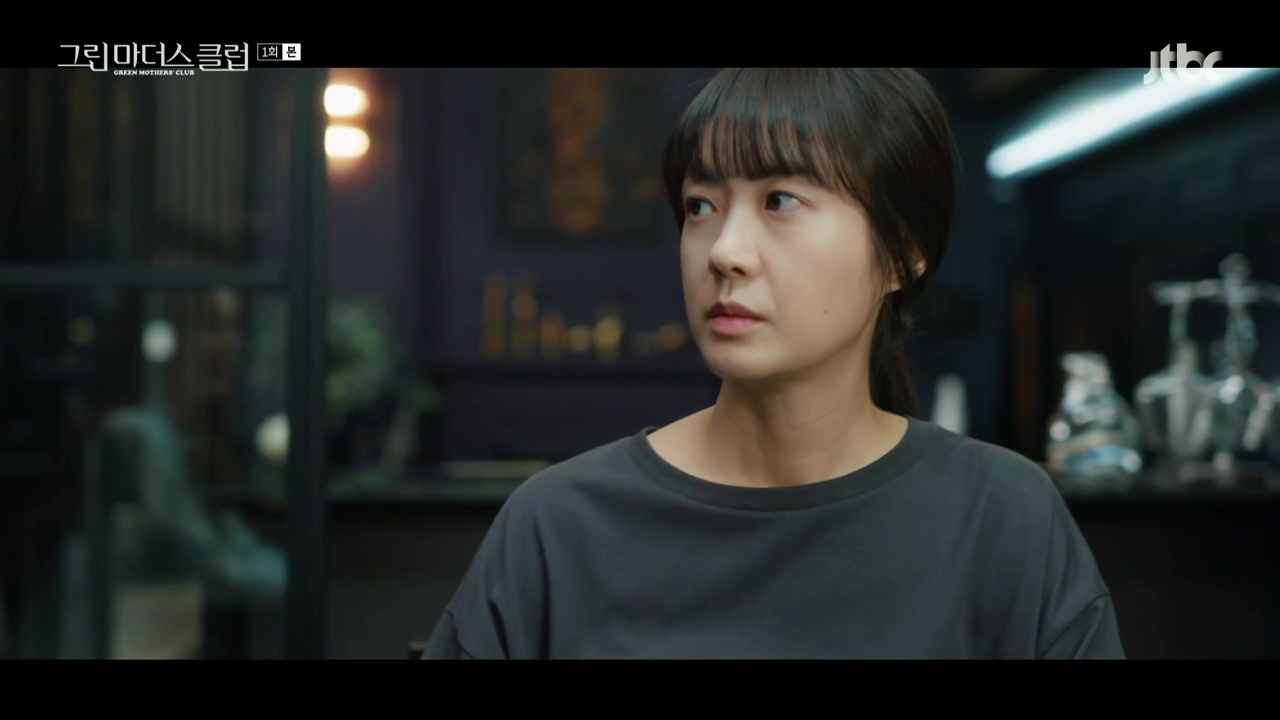 Judging from the dream, it seems a lot of Eun-pyo’s feelings toward Jin-ha stem from a sense of inferiority, which can only have been exacerbated by the fact that Luis and Eun-pyo apparently dated once upon a time. There’s tons of mystery shrouding those three and the time they spent in France, but again, I’d wager there’s a lot more to it than a simple love triangle.

Then, at the end of the episode, Jin-ha takes things from unsettling to downright chilling. After meeting Eun-pyo and exchanging numbers, Jin-ha texts and calls her a few times, seemingly ecstatic to have reconnected. But when her messages go unanswered, she takes an old photo of herself and Eun-pyo and very slowly and deliberately rips it up, flushing the pieces down the toilet. 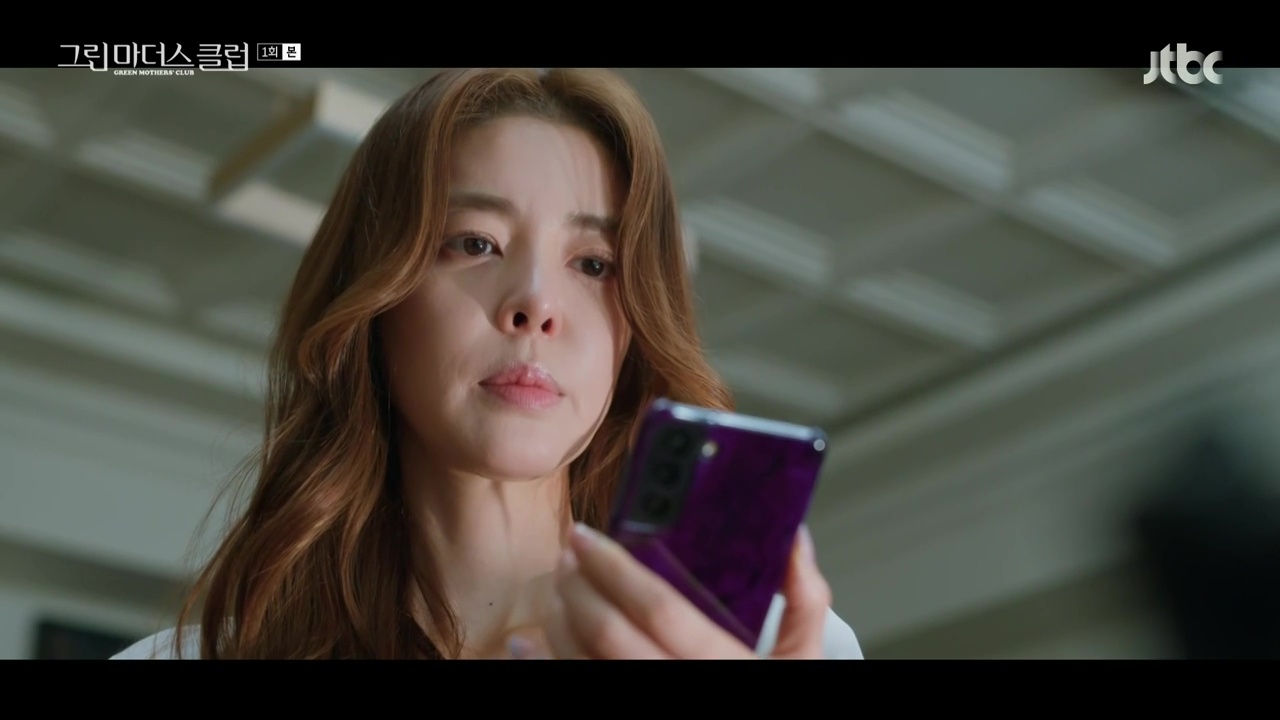 Honestly, if you presented me with this show marketed as a murder mystery, I wouldn’t bat an eye. I’m not saying that’s necessarily the direction I think it’ll go, just that it wouldn’t seem completely out of left field.

That said, I do expect Green Mothers’ Club to delve into the more mundane aspects of each mom’s life as well as their secret inner workings. We’ve already seen glimpses of what makes each of their parenting different – from Chun-hee surrounding her daughter with English-language audio programs from the moment she opens her eyes to our final main character, KIM YOUNG-MI (Jang Hye-jin), persuading her kids to at least eat some broccoli before heading out the door.

And although Eun-pyo is set up as an outsider who’ll need to earn her way into the social circle, she also has potential to shake up that circle completely. As for what the end result will look like, I imagine that’ll depend heavily on what happened in France and what she, Jin-ha, and Luis decide to do about it. 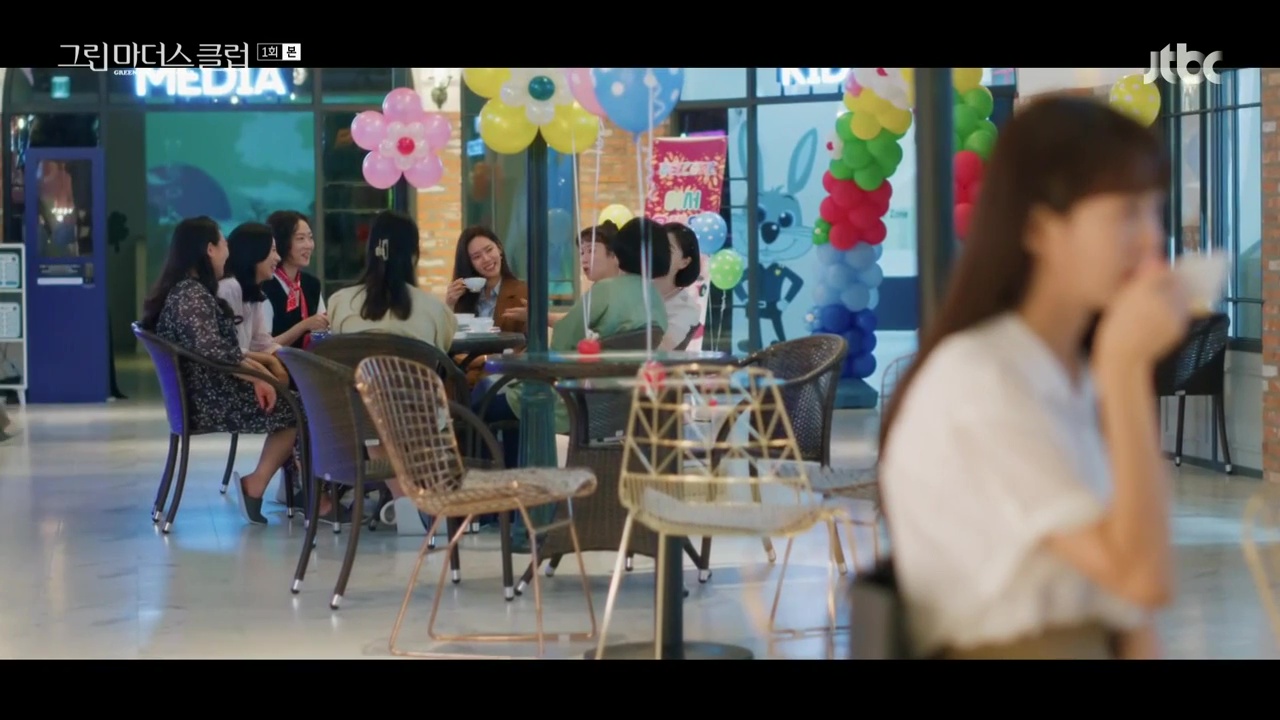 I’m not a fan of this type of drama - couldn’t get thru Sky Castle and The Penthouse (tried a couple of times but just couldn’t) - but this one, surprise surprise, managed to keep my interest although I can’t quite explain why. And I think I’ll keep on watching it.

this first ep got me so curious to know more about what happened in france that I would keep watching just for that. tbh the tiger mom thing always looked too cartoonish to me every time I saw it in dramas, but after years and years of watching modern dramas, I just got used to it. it's not a subject that interests me in itself, but it doesn't annoy me anymore lol

felt bad for eunpyo with the violin thing. I was expecting the other mom to be mad, but still say something like "it was my daughter's fault, I told her to put it in the case" since the drama made her say that line so clearly. even if it was just for her image in front of the other moms, so they would all think how magnanimous she was LOL didn't think she would actually ask for money

This wasn't what I was expecting from Green Mothers Club. SKY Castle and PentHouse vibes all over some scenes. Now add education into the mix and I do not know exactly where this is going. But, the main actresses are selling thier characters perfectly. Thier acting is also impressive. Whatever happened in France, I guess it makes both Eun-pyo and Jin-ha feel inferior and insecure respectively. While I was happy that she knew the PentHouse goddess and that would up her aura amongst the GMs,
GMC ruined it with a crazy past.

Royal Momvely's Group from "Uncle" kdrama was much more interesting than the "Green Mother's Club". With that said, when there are too many dramas out there with similar context, the premiere episode will be the deciding factor in grabbing the viewers' attention and this one, unfortunately was boring despite having a lovely cast. The focus must have been on establishing the individual characters than their relationship with each other because the sequence highlighting the differences in the way each mom tended to their kids in the morning was more compelling than the love triangle.

The awful French speaking made it very difficult to watch. Honestly, I watched the first episode only and I was impressed or interested...

In fact I thought he was speaking Korean when he first appeared, only at the end I understood that was supposed to be French.
I just couldn't finish episode one, and I'm really sorry as I wanted to watch for Jan Hye Jin and Choo Ja Hyun.

After My Unfamiliar Family, I wanted to watch a new drama with Choo Ja-Hyun 😥

The drama started badly for me with the title music - I swear I had to listen to the almost identical music when I was on an one hour long hold at a call centre, trying to sort out a bill last week.

Next came the mothers force feeding their kids education and making this the main purpose of their live, followed by the suggested betrayal of the main character by her best friend and her French lover, who goes by the name of Luis Bunuel! (Is the writer a fan?).

The only relief were Joo Min-kyung and Jang Hye-jin. Love the 'badly' behaved son who is just like a normal kid and does not deserve to be blamed for the broken violin! I will give it one more week, but it needs to get much better for me to stick with it.

The ending of this first episode set a small spark in me. I thought it was going to be just a drama about helicopter moms and building drama. So I will keep watching for now. I'm going to give it two more episodes.

This is giving me the "Sky Castle - Elementary School" vibes for me. And I don't know if that is a good thing or bad thing yet.

I didn't quite expect it to be something in the middle of Sky Castle and Penthouse. While the way the pieces of information intrigues me and kept me on the screen, i don't know if i will enjoy it if they keep the mood of the show this way. I do hope instead of pitting the moms against each other I do hope they're making the moms bond over their mutual interest because I couldn't see their respective husbands making it any easier. I kinda surprisingly am hooked for now bcs they just threw all those questions at us all at the same time.

Ps. It's probably 75% Chu Jahyun that kept me interested

Four episodes in and I can definitely say that none of the characters are likable. You don’t want to root for any of the adult characters.
The one thing drama is telling us that, all these helicopter moms are deeply unhappy or insecure people. Only rich children can enjoy their childhood and rest have to slave away their childhood in academic institutions under their drill sergeant moms.
I do see total absence of fathers from their children’s academic life. They are mostly guests in their home and children’s life.