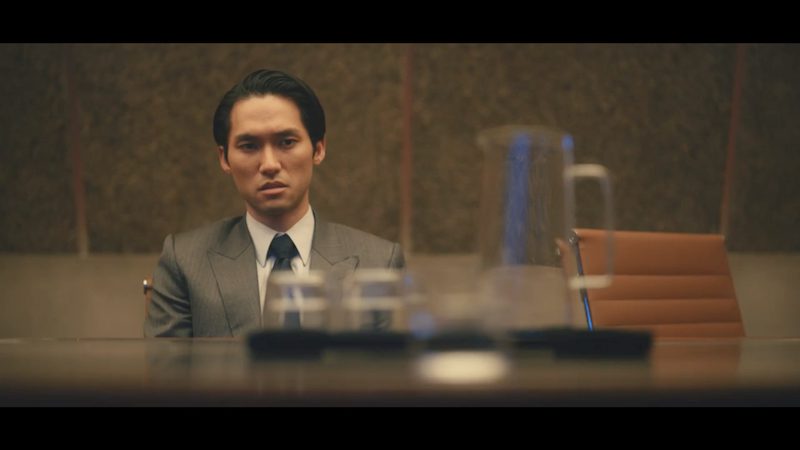 is it just me, or did that tailor shop exchange between Hansu and Isak not happen in the book? i don't recall Hansu being so "invasive" in Sunja's life, i recall that he definitely was watching from the sidelines, but never had a direct exchange like that...

i could be forgetting certain details, but... i'm guessing the production wanted to cast Hansu in a more direct/mean manner? if i recall correctly, the display Sunja witnessed of Hansu's rough/violent exchange with a vendor/fisherman at the terminal - and another incident later with one of his subordinates - was to illustrate that how he is professionally is very much yakuza-like.

but i don't recall him displaying that meanness in his personal relationships.

i just wanted to add that i am enjoying the drama, i just loved the book so much, it bothers me when they change the story...
sawry.

Yes, they tailored that exchange in the show. The show took out many of the middle parts of the book, and condensed it on the show. The original writer isn't a part of this fyi, so I guess the PD here wanted to make her show a bit different than the book. Its definitely propping Hansu to be the main antagonist/anti-hero of the show...

well, people are saying there are supposed to be 3 or 4 seasons, so all the jumping from the front and end of the book will somehow have to coalesce in the middle... i wish they didn't mix it up, but i think they want the audience to not miss the parallels between generations or something...

they'd better do multiple seasons, there's no way they can leave out sections...

Yeah, I know they made Solomon a main in the drama vs the book. Netflix and Apple were the two streaming services in the end that wanted this, but Apple prevailed due to the Korean American content PD who vouched for this show. If Netflix got it, they might have canceled this show if it didn't get its 1 month added subscribers/viewers.

I do hope that given what the creators have said about how much Apple was giving them the budget they wanted. That we see 4 seasons (Soo Hugh) said she envisioned! 32 episodes are actually quite small compared to other Korean historical dramas back in the day, its just the agonizing wait considering actors schedules/renewal/etc. I'm glad the show-runner at least has a plan for this to be 4 seasons instead of running it to the ground.

They also added Sunja as a Jeju-style woman diver in the first episode, etc.. Seems that the screenwriters are "making it their own," yet they are trying to capture the essence of the book.

People are missing out on a JEWEL.. This drama is so beautifully executed especially this last episode. I am not sure if its popular in Korea or not but this drama is definitely worthy of an EMMY Nomination. The ending scene and the cinematography just blew me away.

In Korea, they've a streaming service called Watcha. On there, the show was ranked #1. Watcha isn't the most popular streaming service since Korea has so many, but its like #5 rank in terms of subscribers there. Plus, people make short videos condensing the show into 15-20 minutes for Korean viewers which helps. It is a tad of a bummer that Apple+ is kinda eh when it comes to the hype machine online/power compared to Netflix. Anyways, the more Asians getting recognized in Hollywood, the better! This could be The Crown for Apple+ if they play their cards right with awards!!

Apple hasn't built out a hype machine for their streaming (they don't need it), but they're better at winning awards then Netflix. They nabbed the Best Picture Oscar this year on their first try, while Netflix has sunk several billion dollars and years trying to get that Oscar and got overlapped.

Apple will definitely make an Emmy campaign push for Pachinko.

Pachinko has gotten great reviews so I definitely think Apple will launch an Emmy campaign. They do need to work on their hype machine though. Ted Lasso and CODA took off in spite of Apple, but they have some good shows that didn't get the attention they deserve because Apple is terrible at hyping them.

Yeah, but I feel like Apple isn't that concerned about hype because the company isn't dependent on streaming subscriptions for revenue the way Netflix and Disney are.

Apple TV is not even a key company priority and the team internally is functioning like a mess. And yet they still pulled off that best Oscar and Netflix is seeeeeething.

This article gives a good overview into Apple's (lack) of marketing: https://www.macrumors.com/2021/09/10/apple-abandoned-dongle-looking-to-double-content/

Thanks for the article!

True, its Apple+ they don't need the revenue lol. However, I do feel like if I've to compare to The Crown (Netflix). I do wish an Asian historical epic could be more widely viewed or seen. I know they're far pickier than Netflix, as they tend to dump their shows w/o much promo until it hits then they release the promos like crazy. But generally speaking, had Netflix taken this on I do wonder what they would've changed or how it would've fared globally. Anyways, I did note that the subtitles for Korean, English, and Japanese for each region in the drama was way better than Netflix. It was done so in a manner that made it tangible to audiences w/o cutting down either.

As @missh said, they'll for sure launch an Emmy campaign. They've the $$ to create a nice ad campaign for voters. I hope they can ramp up the hype machine b/c it does seem as of now, its not like Ted Lasso breakout success yet. But still given the risky subject matter, I'm glad that the creators were given their full due and a 13 million per episode for their first season. Emmy awards season for 2022 shows ends on May 31, so this show is in prime season for the Emmys this fall. Ironically, it'll be competing against Squid Game too. Man, K-dramas/Korean content is on fire rn!!

What brilliant directing. The flashback is executed deftly, easy to understand. The last 5 mins must be the most exquisite sequence I’ve seen.

And I love the OST choices. Not your typical BTS member crooning predictable songs.

Lee Min-Ho and Kim Min-Ha (who is not tagged in case) failed to make me interested or feel for their characters.

I liked how they compared the old and new area with simple every day life scene, it's beautiful.

The direction is good but I would prefer to care about the characters...

if they told the story like in the book, you would actually care...
: (

but, this is not a bad adaptation... just saying. everyone will have to see the 4 seasons to get the whole story, i guess.

Wow, I binge 4 episodes in 2 days - and honestly I was undecided as ep1 was slow with the set up and I found the 2 timelines sometimes difficult to follow BUT here’s the Big But , after watching till ep 4, I think this is a sweeping epic unlike any other kdrama.
Ep4 had me ugly cry and fist pumped when old granny gave the third finger to the bankers and when Sunja cling on to her mother before leaving her homeland.

This is not any man’s drama so if anyone is here just to see LMH, yeah he’s there doing his thing but everyone shines here. Even the side characters, mother got me surfing wondering show is she, what other dramas has she been yet even Kim Ha especially - stood out very well. The actress playing young Sunja - she’s a great find. Her monologue to the priest was just *chef kiss - this is one real epic. The cinematography, directorship is on the level of movies (and great ones), don’t view this with kdrama lenses, come for great story telling and no wonder the reviews are raving it. It’s totally deserving.
I’m hoping the next 4 stays strong but considering how they managed to weave the timeline so perfectly, I’m confident this is going to be a strong contender for international awards.

So many epic scenes that I couldn't single out one as the best from Mom trying to buy rice as parting gift for Sunja or Geum Ja's refusal to sign or Solomon's dance in the rain. This drama is really doing wonderful job of portraying three generations.

Sunja never told her mother who the baby's father was till the end. Her crying and hugging Donghee, Bokhee, and her mother before leaving was heart-rending. Since the singer asked for her due date, Sunja's baby bump shows, so do all the boarders and market people know she got pregnant before marriage? The singer's pansori was powerful, but she didn't have to kill herself. I really love Isak and can see Sunja falling in love with her husband. I was proud when Solomon told the landowner halmeoni not to sign and how they spoke Korean so no one understood.

On that time, singing a pansori in front of Japanese official means death or worse, tortured before killed.