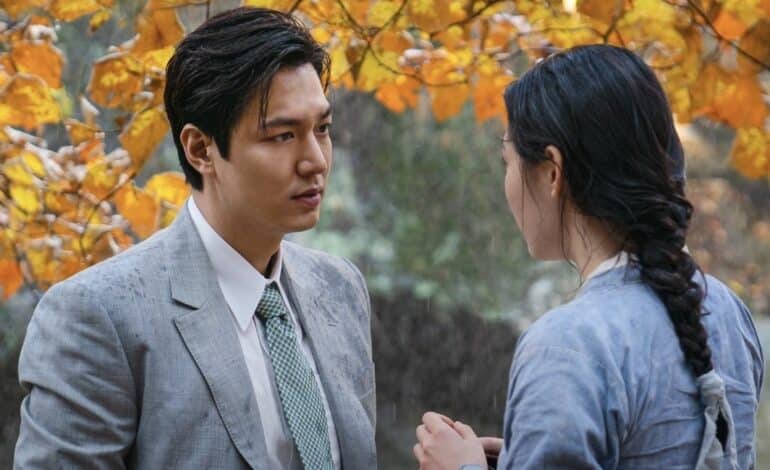 Whether you’ve read the novel or not (or perhaps it’s been on your list for the last three years like me), chances are you’ve heard that the adaptation of Pachinko has long been in the making — and of course, that Lee Min-ho (The King: Eternal Monarch) himself was cast in it. Now, what feels like a good century later, the 8-episode drama is gearing up to premiere on Apple TV+ and has been getting quite a bit of international press. All eyes have been on K-content ever since little releases like Parasite, Minari, and, you know, Squid Game, so it feels like Pachinko carries a good bit of expectation on its shoulders.

It’s more of an international title than a K-drama, and boasts an international cast, two Asian American directors, was produced in three languages, shot in multiple countries, and seems, all in all, like a true global title. I’d say that in my mental Venn diagram, Pachinko overlaps with dramaland mostly because of Lee Min-ho, somewhat because of the other amazing cast members, and then slightly because of the fact that it’s a story about a Korean immigrant family.

In addition to Lee Min-ho (taking up much of the press), the drama also stars the wonderful Yoon Yeo-jung (Minari), and other dramaland familiars like Jung Eun-chae (L.U.C.A.: The Beginning), Han Joon-woo (Through the Darkness), and Jung Woong-in (Idol: The Coup), among others.

Gearing up for the March 25 release, Apple TV+ has released an epic movie-like trailer that you can enjoy below (it’s beautiful!). Interestingly, the drama will drop its first three episodes on the premiere date to get you hooked, and then release the remaining five episodes one per week on Fridays.

Given the cultural and literary weight of Pachinko, I do have concerns about Lee Min-ho's casting (who I like just fine.) For all his positive qualities as a performer, I have never gotten the impression he is a particularly deep actor and I fear either the script will be over his head, or the script will be tailored down, doing disservice to the novel. Thankfully, the eight episode arc and others in the case suggest the series will be consistent with the novel and be more of a ensemble than one clearly fronted by leads.

Honestly, I'm not a huge fan of LMH; however, he might be a good fit for the role he is playing in this.

I do generally agree with you on Lee Min-ho’s acting capability, but given the sort of character Koh Hansu is in the book, this role might actually play to his (albeit minimal) strengths as an actor. All Lee Min-ho has done throughout his career is play rich assholes, so I’d expect even him to have the formula down by now.

LOL at your last sentence. LMH really nails that kind of role :D

I get what you are saying but although it's been a number of years since I read the novel, my recollection is that Hansu had some complexity -- rich, selfish a-hole is how he acted, but not necessarily all that he was, and not just in an easy, "he has a sentimental side" kind of way.

True, but my memory of the character is that unlike most of LMH's characters (who start out as cold, arrogant jerks and evolve into likeable marshmallows), Koh Hansu is never really redeemed in the novel. He remains cold and arrogant throughout. In other words, LMH can't just coast on charm or looks here; he has to have embraced the fact that he's playing a character who's not designed to be a beloved hero.

.In a recent interview with Vanity Fair, show-runner, Soo Hugh is currently planning Pachinko for a total of 4 seasons.

LMH might not act the brightest or deepest fish in the sea, but he had some depth-y performances in Faith, Legend of the Blue Sea, and City Hunter. So I’m not too worried.

Koh Hansu doesn't play a very major role, he appears periodically after his initial introduction/participation. later, the story is focussed on all the other characters.

i can't wait to see this, i hope it does the book justice!

Wow, trailer looks stunning! I'm going against the current and say that I like Lee Minho's casting. Only saw him in TK: EM, and it was intriguing because I thought that his acting was a bit on autopilot, but he had like flashes of great acting here and there.
A gray character like Ko Hansu could be LMH's opportunity to stretch his acting, because he's got aspects that he's got down (the smoulder and the romantic streak) but he's also sleazy and ruthless and I totally think that LMH can bring it home under the right direction

Lee Minho's character is very much a secondary character in the novel. He's getting a lot of focus due to his name, but given how the trailer is cut, and which characters the book revolves around, the other actors should all have more screen time than him.

The cinematography for this looks lavish and very Western. Curious to see if Apple pushes this for awards circuit if it does well.

Also, I don't think this role is much of a departure for LMH from his other roles, because Ko Hansu is also the handsome, rich arsehole type that he's used to playing.

If Pachinko's IMDB and Wikipedia entries are anything to go by, at this late date there still isn't any actor listed as playing Noa, Hansu's son. I've got a funny feeling Lee Min-ho might have two roles in the show...

I am wondering how this will play out. I picked this book for my book club last year and it was such a good story. Gonna go in with low expectations though. I really hope they don't make Hansu a larger character than he was in the books. Honestly, he was an absentee. Only came when it suited him. Though, it will be interesting to see how they show the growth of the countries. I love that aspect of the story.

Agree: "I'm wondering how this will play out". Loved the novel - but it was largely about the passage of time, sweeping an entire century, and how so much changes but not the issues ethnic Koreans face in Japan. How they can get that down to 8 episodes remains to be seen... But *IF* they stay true to the novel, Hansu will be in ep 1, and return with a lot of aging prosthetics in eps 7 and 8! Can't see *that* happening to LMH, so I'm guessing they'll play fast and loose with the book.

I think they should do this in parts. Part 1 (first 8 episodes) and part 2 (last 8). This is why I would like for them to go back to the 16 to 24 episodes that they typically do.

i have so been waiting for pachinko to air. the book is one of my favorites! i was surprised that lee min-ho was cast in the role of hasu the male protagonist. i thought he would have been a better fit for one of the sons or grandson. it will be interesting to see him age. just hoping that pachinko gets streamed by other sites than apple tv+.

The trailer looks gorgeous,and i suspect the rest of the cast will do most of the heavy lifting (acting wise), Lee Min-ho cant act to save his life, but he is an iconic hallyu star and no one can take that away from him.

Will definately check out the novel and the first few episodes

I think LMH would be a great fit for this. And while people assume it's easy to play a rich ass hole, don't underate the fact that he embodies the role so well, sometimes it's hard seeing him in something different.
For Apple to cast him I believe he is worth every pretty penny and would do great.
Can't wait to watch

I hope to be able to watch this somehow, but I don't have an Apple Tv subscription.

Same problem. Can Netflix get rights on this, please? Didn't somebody write the 'request' email for Netflix here on db? Can you re-post please? And the book, is it international release, in English? I wonder if it is in kobo.

The book’s original language is English. It was first published in USA and the author, Min Jin Lee, is Korean-American.

as @am1993 wrote, the book was originally an English-language release. I believe I found a link to the ebook version for your kobo reader: