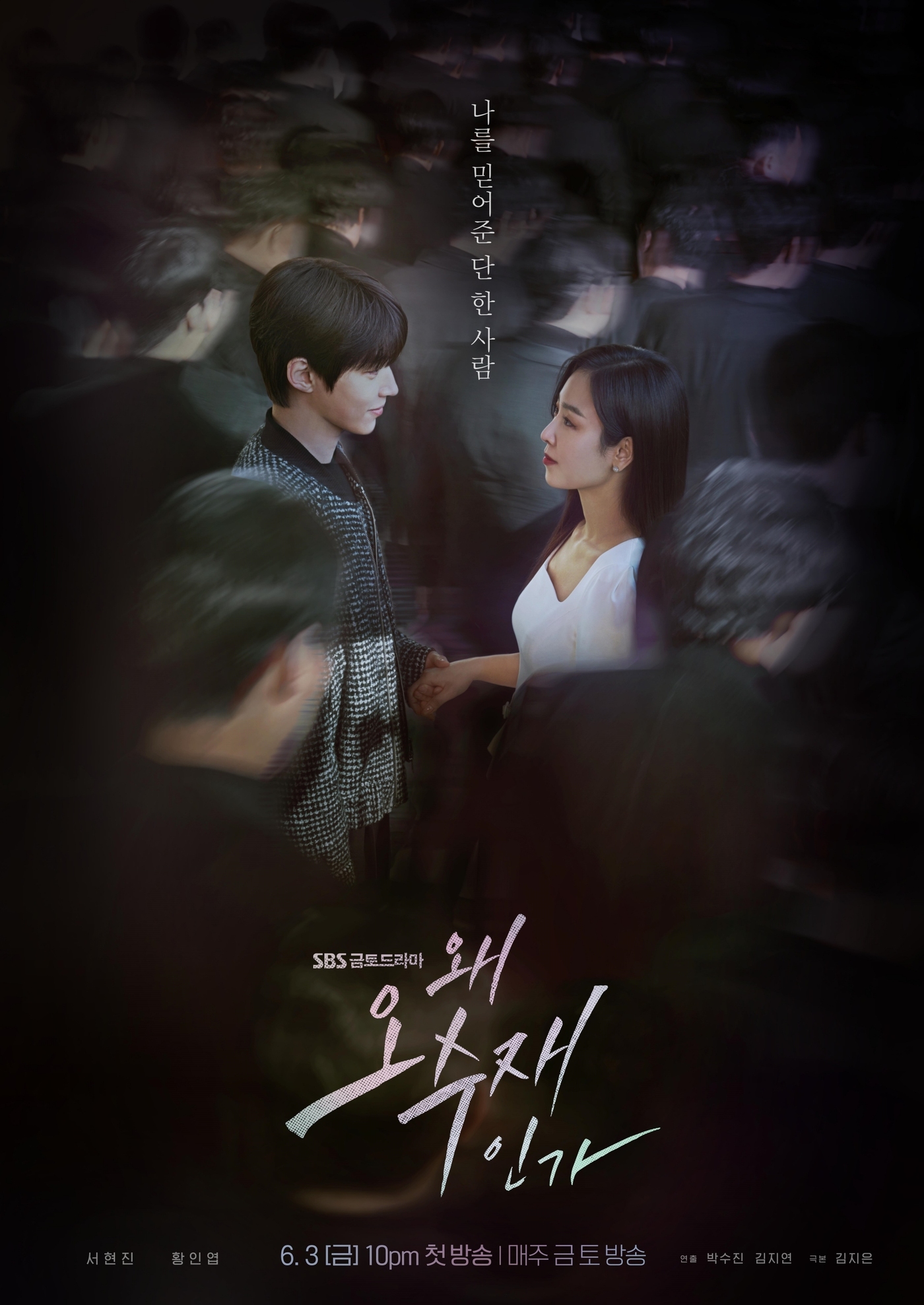 As we head toward premiere week, SBS has been pushing out more promos for the upcoming Why Her? and we learn more about the backstory that ties our main characters together.

In the central role, Seo Hyun-jin (You Are My Spring) plays a lawyer who has sold her soul to the devil, in a sense, for the sake of survival and success. Despite how much she has changed since Hwang In-yub (The Sound of Magic) last met her ten long years ago, Hwang is ever loyal to Seo and vows to protect her.

Naturally, the drama’s big bad Heo Jun-ho (Snowdrop) isn’t about to just let Seo Hyun-jin get in the way of his master plan. We also have a fourth player mixed in: Hwang’s fellow law student Bae In-hyuk (At a Distance, Spring Is Green).

The latest video teaser begins in the past when a younger Hwang In-yub was out in the rain at night, looking for someone named Na-jung. Hwang calls for help when he finds the body, but we cut to him in prison where he rages at a cowering Seo Hyun-jin, “You’re not going to listen or believe what I say. So, get lost. I said get lost!” Seo doesn’t leave, though, and reassures Hwang instead that, “By the way, I do believe you.”

We then jump forward to the present-day Hwang In-yub who admits, “I really missed you.” The appearing text screen reveals that Seo Hyun-jin was the only person who had believed Hwang in the past. But now, ten years later, Seo sings a different tune: “I don’t trust my clients. I trust myself to defend them.” To this, Hwang argues, “But Professor, you weren’t always like this.”

In the sequence that follows, we see Seo Hyun-jin struggling with trauma and busying herself with work. We hear a woman calling Seo ruthless and questions what will even happen once she gets to the top. Seo tells her, “I’m just trying to live. If I don’t do this, I feel like I’m going to die.” An angry Seo Hyun-jin then meets with Heo Jun-ho to demand an explanation, “Park So-young. Did I kill her?” Heo retorts, “The people say that it’s because of you. The world says it!”

Back at law school, Seo confronts Hwang In-yub about his behavior asking, “Why do you keep crossing the line?” But Hwang simply replies, “Because I worry about you. A lot.” We then flash back to his application interview, when the recruiter had asked why he wanted to attend law school. Hwang responds that, “There’s a person I really want to find,” and the teaser comes to a close on Seo Hyun-jin.

Premiering next week on June 3, SBS’s Why Her? is directed by PD Park Soo-jin with scripts penned by Kim Ji-eun. The drama follows Again My Life in the Friday-Saturday slot. 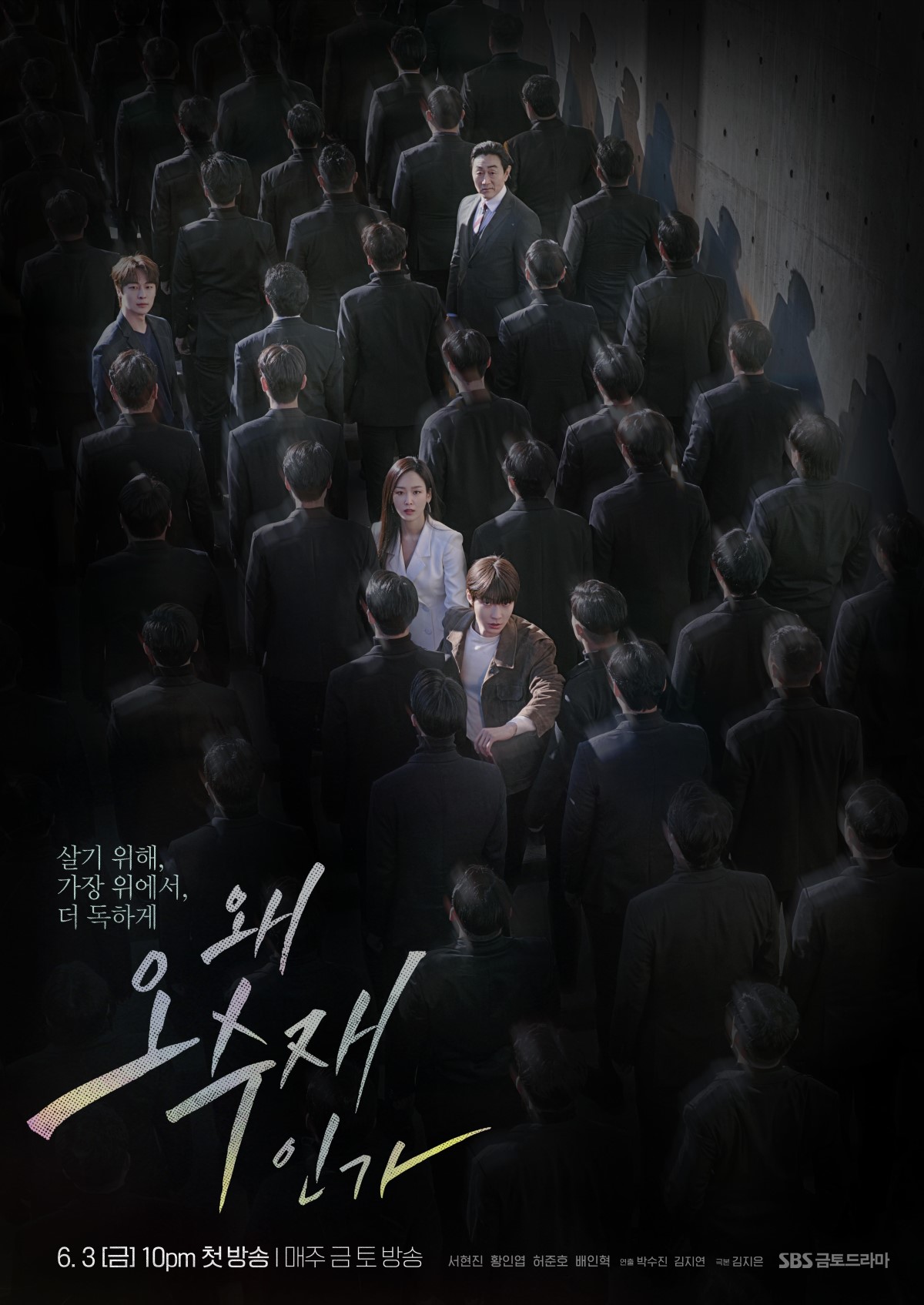 '10 years ago'. At least the age difference is clearer. I hope this works for me. Time be favorable, please.

I'm looking forward to another Seo Hyun-jin drama to sink my teeth into. In truth I think the only one of her dramas I've ever finished is Another Oh Hae-Young but I've tried most of her others even when I knew the plot was going to lose me just because I love what she brings to her characters so much.

Also, an above comment made me google the actors age difference and I'm absolutely flabbergasted that the ML whom I've been considering a kid this whole time is actually a year older than I am which is actually weirding me out a little lol.

This is slightly different from what you are saying about Hwang In-Yub, but I can't help find it a little depressing that in every noona romance, the woman agonizing over being too old could easily be my daughter.

Although I know it will be theme, I sure hope they don't make a huge deal of the age difference in this one, since the actors are only 6 years apart in real life.