In the Soop: Friendcation: Episode 3 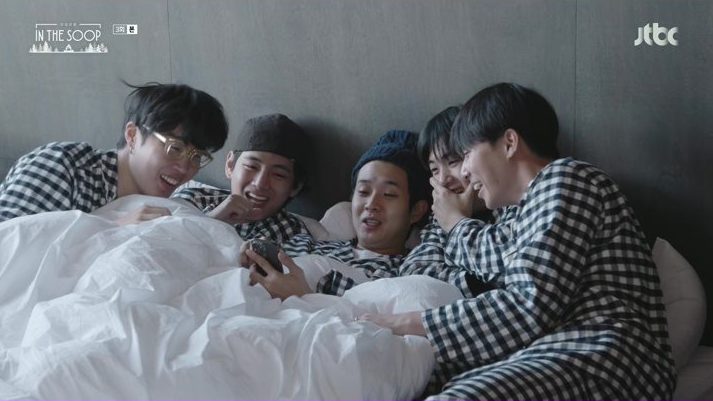 The Wooga Squad is definitely more low-key when it comes to how they like to spend their down time – a fact that Seo-joon himself brings up in Episode 3. But for me, the relaxed, intimate vibe is a win, as it means we’re treated to an abundance of deep conversations between the guys, filled with honest reflections and small moments of joy. Emotionally vulnerable, healthy, and fulfilling friendships – we love to see it! 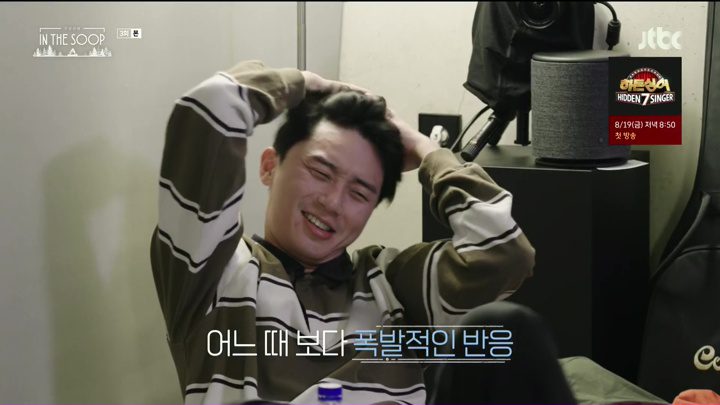 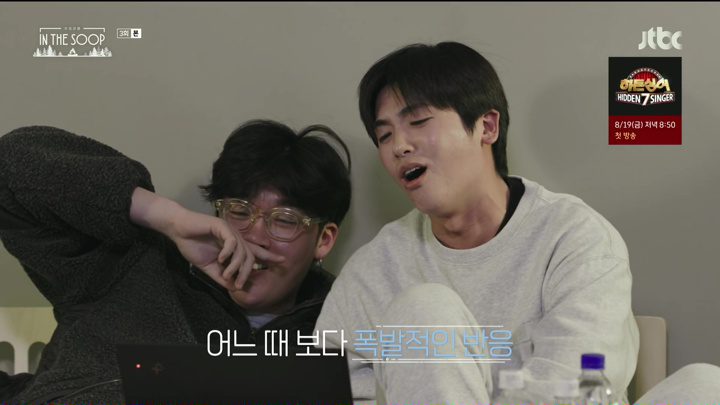 We pick up right where we left off last week, with the group moving into the game room after dinner to catch the currently airing episode of Our Beloved Summer. They also make sure to bring Woo-shik’s beer can chicken to snack on, and Seo-joon sweetly feeds a piece to each of his friends.

It just so happens that they’re tuning into a pretty pivotal episode where Woo-shik gets to deliver a teary and goosebump-inducing confession to his leading lady – and it provides plenty of opportunities for us to watch the rest of the group’s dramatic reactions to what’s happening on their screen. The best part comes after the epilogue, which ends with a kiss between the main couple – there’s yelling, flailing, and kicking from the Wooga Squad (stars: they’re just like us!) and it’s hilarious.

Afterward, the conversation turns to the guys’ work, giving us some insight into how they’ve handled different moments in their careers. I love hearing them talk about how they’ve inspired and motivated one another throughout the years, and how they feed off each other to overcome setbacks and continue to grow. 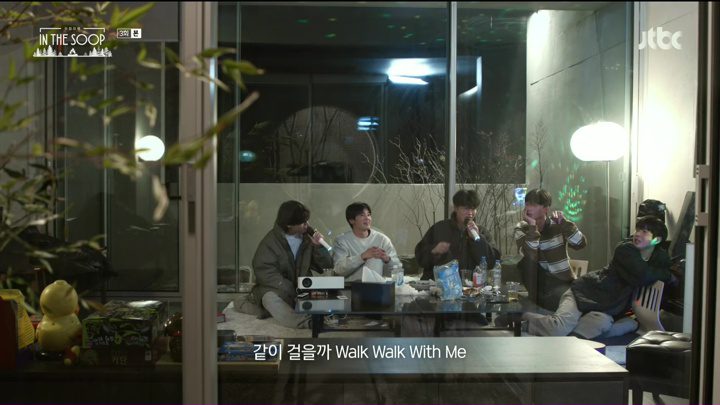 The night winds down with karaoke, where we’re treated to the sweet harmonies of V and Hyung-shik as they sing duet after duet. The other guys have a turn too, and we even get to hear the first (and last?) ever live performance of V and Peakboy’s collab “Snow Flower,” but it turns into more of a comedy routine when no one can keep a straight face during the song.

It’s finally bedtime, but first things first: the guys can’t bear the thought of sleeping in separate beds, so they lug their mattresses to the floor to make one giant bed with room for all. Adorable.

Even as they’re tucked in, they’re reluctant to go to sleep right away and instead opt to chat some more, this time about their goals for 2022. Woo-shik and Hyung-shik mention wanting to do meaningful work. The mood shifts when they get to V, who says that he doesn’t want to be sad this year. Aw. 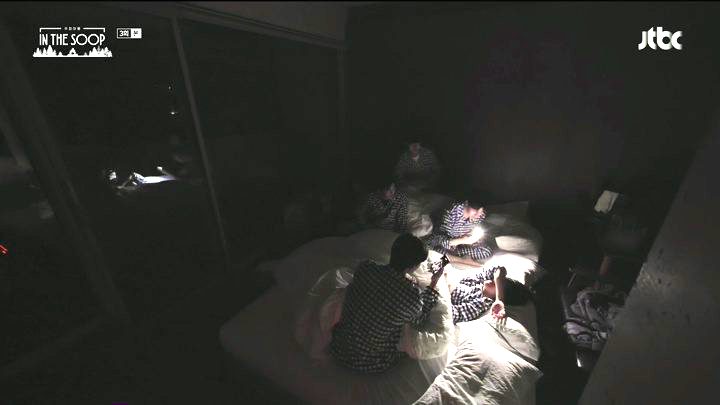 V sheds some tears as he explains that he has regrets from the previous year. His hyungs do their best to comfort him, from trying to make him laugh to offering him encouraging words for the year to come. Woo-shik even wonders if the friendly atmosphere among the squad made it harder for V to open up to them about his struggles. As they exchange “I love you”s before calling it a night, my heart swells three sizes at how beautifully open and vulnerable this friendship is.

The next morning, Woo-shik gets up first and assumes responsibility for breakfast, giving Seo-joon a break. There’s no real agenda for the first part of the day, so they roll around in bed, spend time at the sauna, and do some light working out. 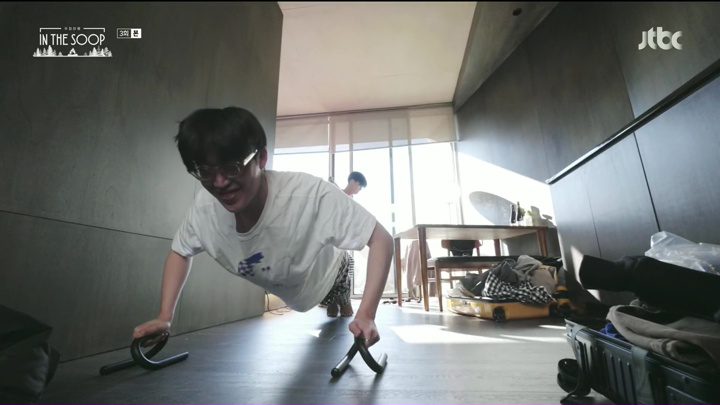 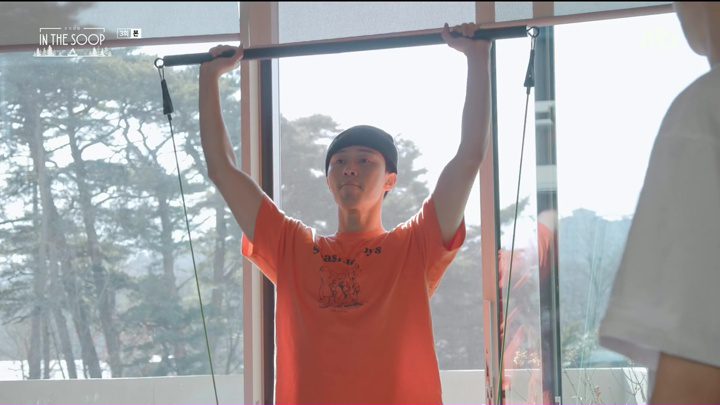 After getting dressed and partaking in a little makeup tutorial from Seo-joon, it’s time for lunch. As the guys slurp down their jjajangmyeon and sweet and sour pork, they go over their plans for the rest of the day, which includes a trip to the beach, ice skating and of course, more food.

The car ride to their first destination is peaceful as the guys take in the beautiful scenery, and soon their conversation returns to their goals and dreams – or more specifically, their bucket lists. For Hyung-shik, it’s extreme sports: sky diving and skiing down a mountain after jumping off a helicopter. V wants to live abroad. Peakboy vows to take a family photo this year, and Woo-shik says he’d like to produce something, or maybe even direct.

Seo-joon comes up with the brilliant idea to fulfill Woo-shik’s wish: the Wooga Squad could create a movie on their next trip together. But when he’s asked about his own bucket list, he laments that he’s coming up empty these days, and everything feels like work. When Peakboy advises Seo-joon to rest, the group ponders what it really looks like to rest amidst their busy lives. 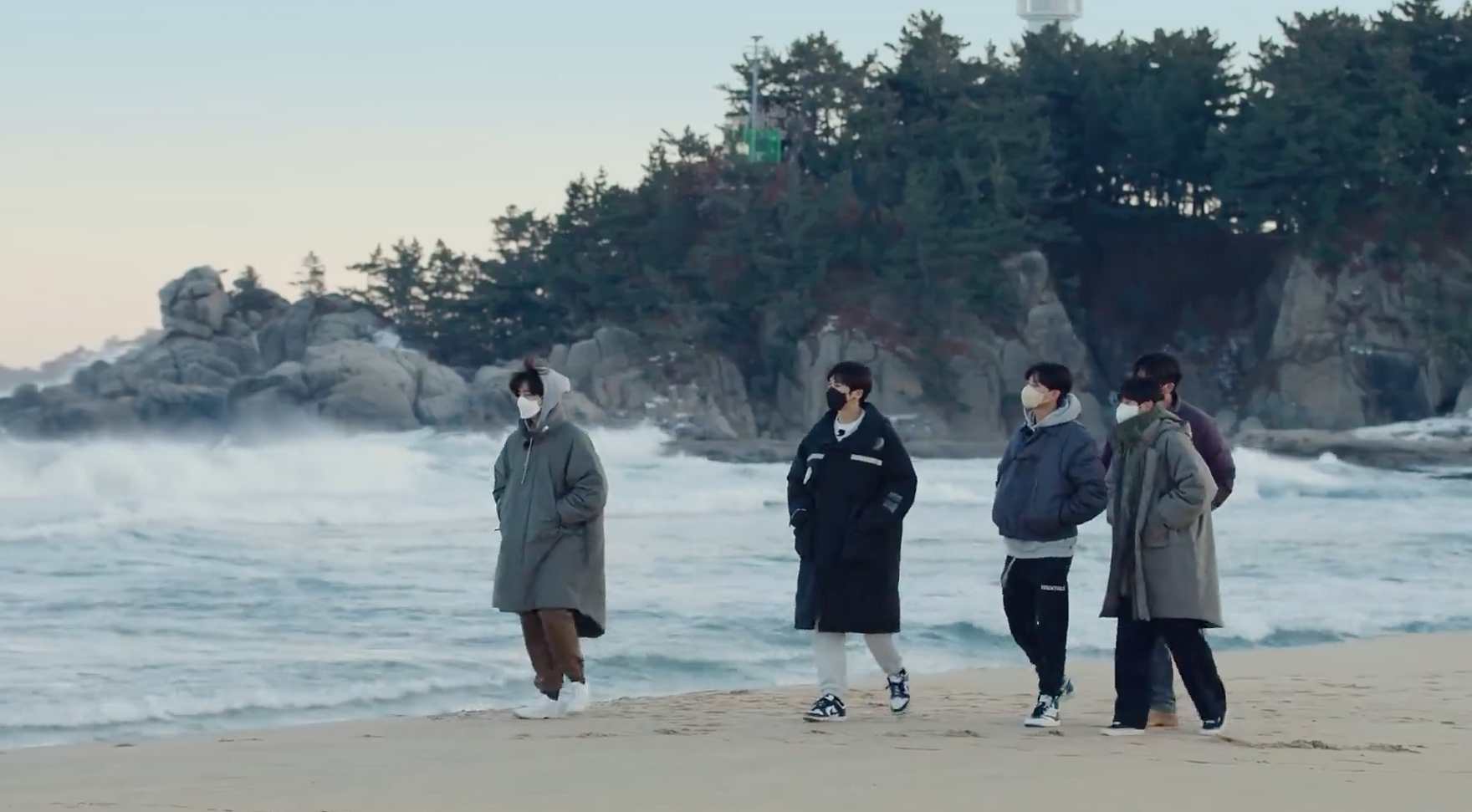 The pensive mood dissipates upon arrival at the picturesque coast, as the guys marvel at the crashing waves, take selfies, and stroll along the beach. From the looks on their faces, it’s clear that like being in this beautiful location, together with this group of friends, is the much-needed rest they’re all looking for – the literal embodiment of “healing.”

It’s just as healing for me, as a viewer, to watch the squad as they spend time together and have real, quality conversations that they just don’t seem to have much time for in their daily lives. I think there’s something so relatable about the introspective questioning they’re choosing to share with each other and with us, whether it’s about their place in the world, their work, their desires, or their regrets.

As clichéd as it might be, Seo-joon’s analogy comparing life to a 100 meter race, particularly in the way he focused on the difference between the two, resonated with me as well. Unlike an actual race, he says what’s important in life is not to cross the finish line first, but to stay in the race, and get up when we stumble – I think that’s a beautiful way to approach life. I’m so glad that these friends have each other to support them on what could be an otherwise lonely journey as celebrities and entertainers who, for better or worse, have to share so much of themselves with the broader public in order to succeed. 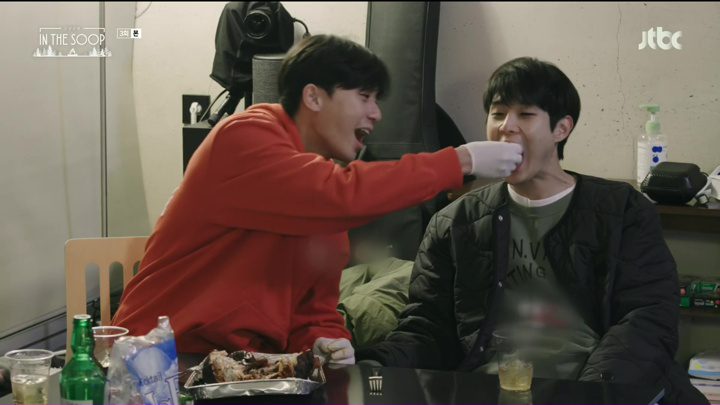 @chocolatte Thank you for articulating so much of what I wanted to say about the contrast between the boys to men conversations and actions.

They reminded me of the pure joy of being totally comfortable with friends like siblings when they were singing and talking about who was the person snoring. I loved that Wooshik had compiled evidence in advance to prove he wasn’t the one snoring just in case🤣

The conversation in the bed at night and in the car were much more serious adult conversations and showed that all adults whatever our roles and responsibilities have times when we need to reflect and be proactive in planning for the life we want.

The background songs while they were talking all snuggled in bed together what was that about? Was it actually happening while they were recording or did someone add it as backing to prevent us hearing all they said? It was really distracting.

I don’t like reality tv usually but I must say this has been surprisingly good and I am glad I got to experience it. I watched a web drama (One fine week) about a female dancer/singer who hated to do reality tv and it led to extreme anxiety but was being forced to do it by her agency and I think that I worry about the reality of this for stars. Seeing them walking around the shops and beach I think how often do they get to do that without being swamped.

I was so confused about the background music at that one part — I thought it was coming from my own computer! It really did make it hard to hear the conversation, which is a shame because it was such a cute moment.

I’m glad that you seem to be enjoying the show as much as I am!

The scene where they watched Our Beloved Summer was too cute for words. It really did feel like a "the stars are just like us" moment. I like how supportive and loving they are with each other.

PSJ talking about how there's nothing that feels exciting is something I think a lot of us experienced post the start of the pandemic. It's been a mentally draining 2 years for everyone clearly.

fsr this comment just made me start crying. it really has and it feels like it isn't getting better. there's definitely an epidemic of loneliness but this feels warm

aww hugs from me. this show definitely feels warm and lovely to me too.

kinda reminds me of ep 8 (or 9? idr) of house on wheels. it was so soothing and it felt good to watch. also it's nice to see male friendships not centered around some weird dynamic and actual intimacy.

i only caught glimpses but i think i'm gonna watch all of them to wind down. it's been a trying time

It is a lovely watch for the winding down as they model how to do it so well. They eat, sleep, mess around, sleep and eat. Occasionally they do a set activity but the best conversations are while driving or lying in bed. It’s so sweet that they all slept together as none of them are small men but time was short and they clearly wanted to maximise their time together. It was like a sibling group or being in a dorm at school. They clearly know each other well and didn’t avoid talking about the important things.

Ah, @chocolate1999 thank you for these recaps.
I enjoyed episode 3 for the thoughtful conversations. There is nothing better than a good, reflective talk with a kindred spirit--how lucky these 5 are.
Hyunshik singing Park Hyo Shin was the moment for me.

I laughed at SeoJun when he told Wooshik that the fact he feels crying so much in OBS was cathartic means that he’s getting old. I laughed because that’s so true. When you become mature you become more empathetic with things going around. I am not a crybaby when I was younger but indeed now that I’m a lot older I shed some tears now and then from real stories I read or hear. Wooshik is playful but he’s also sincere I guess.

Anyone know what PHS' nickname? I just watched ep 3 and I don't think they've given him one.