[Friday Flashback] Who Are You? 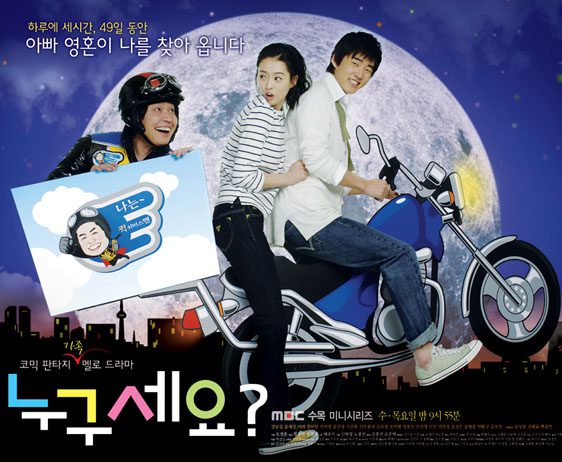 Synopsis: When Son Il-gun died, his daughter, Young-in, inherited a mountain of debt, and in a desperate attempt to make up for his shortcomings as a father, Il-gun began possessing Cha Seung-hyo’s body and abusing the younger, richer man’s credit card to shower Young-in with expensive food and gifts. As Seung-hyo tries to make sense of his recent blackouts and figure out why he’s drawn to Young-in during the gaps in his memories, he starts to piece together the events the lead to Il-gun’s death, which had previously been ruled a suicide. 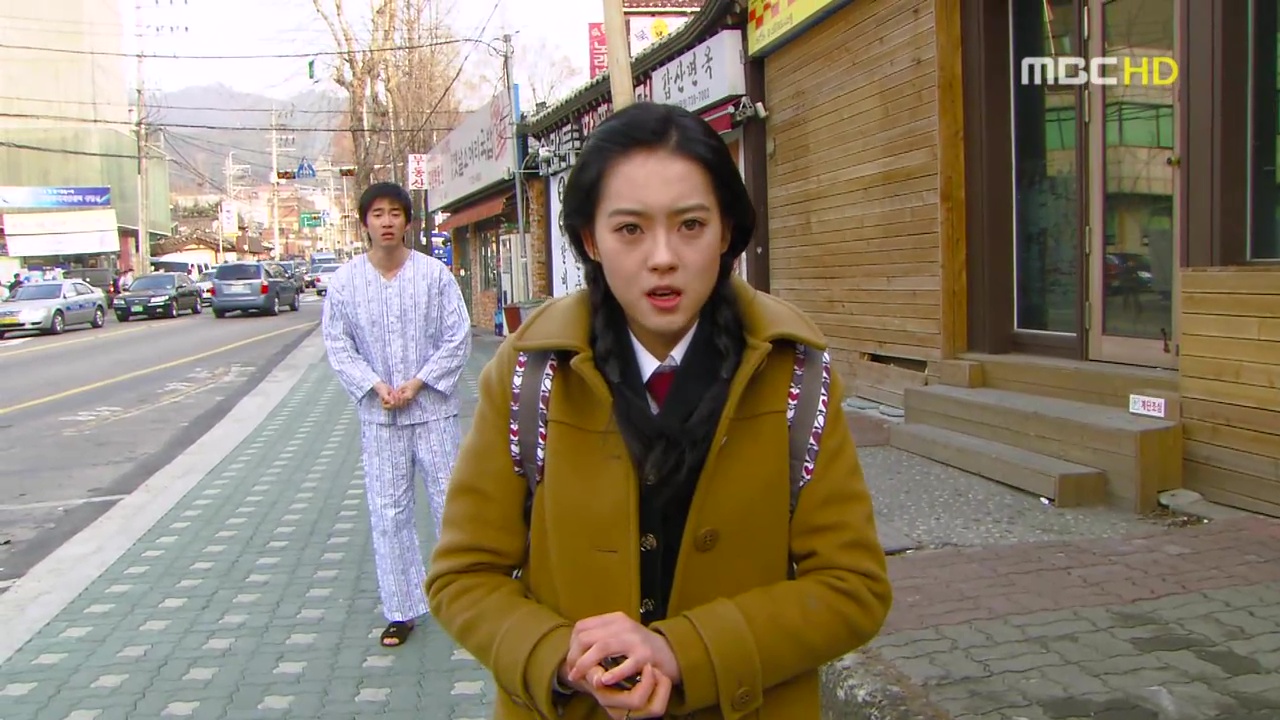 Why You Should Watch (Or Shouldn’t) Who Are You?:

It’s Spooky Season (my favorite time of the year), so I thought it would be fun to revisit the first ghost-themed K-drama that I ever watched. Who Are You? — not to be confused by the 2013 drama of the same name and genre — is a (mostly) lighthearted story that has stuck with me over the years. I’ve considered it a long-time favorite, but I haven’t rewatched it since my initial viewing. So this particular Friday Flashback feature was a true test of my nostalgia. Would Who Are You? live up to my memory and expectations? Or would the rewatch leave me cringing from the realization that this was the kind of romance story I gushed about when I was in college?

I’m not going to beat around the bush, Beanies. I’m feeling a wee bit embarrassed. Now, that isn’t to say this is an awful drama that should be avoided at all costs, but — and maybe this will come as no surprise to you based on the drama’s synopsis — I swear the the writers looked up the definition of “father complex” in a psychology textbook and thought, “Yeah, that sounds romantic, but what if we added a ghost?” 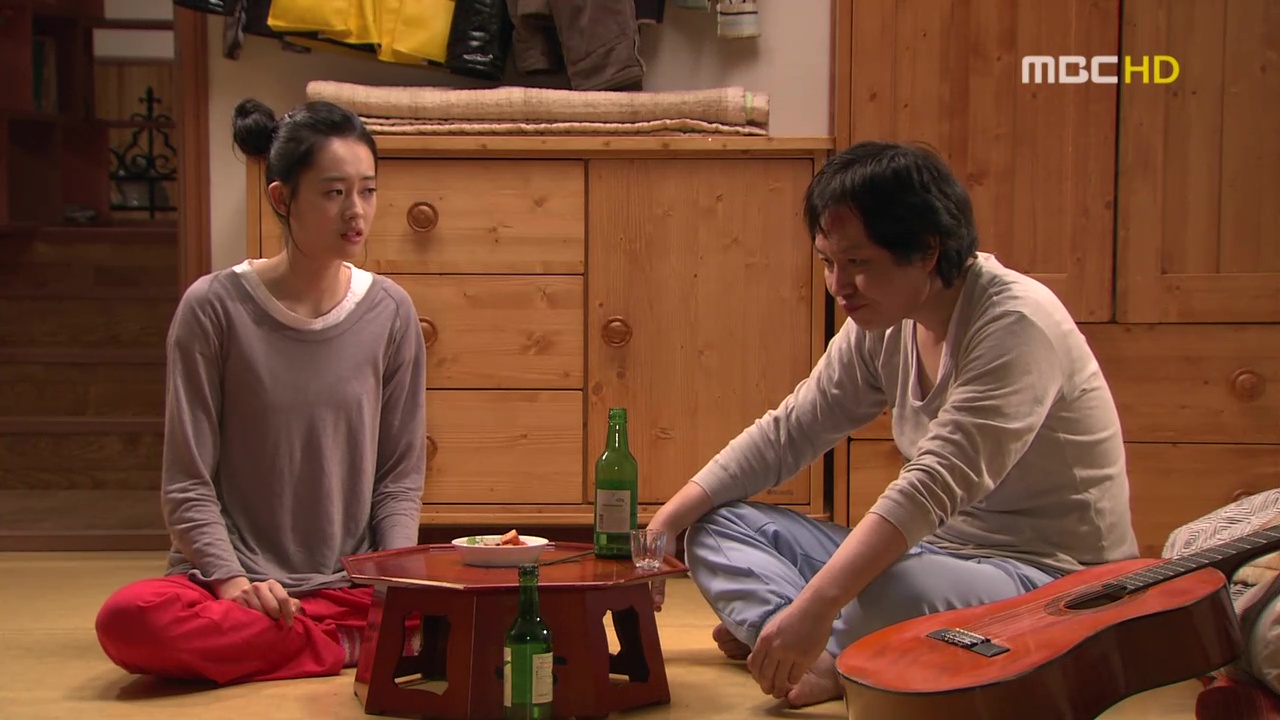 Like all Candy-centric K-dramas, our story opens with a crash course in our leading lady’s financial situation, and it ain’t pretty. Son Young-in (Go Ara) is a high schooler on the cusp of graduation, but instead of celebrating and looking forward to college, she’s burdened by her father’s debt and hounded by loan sharks who threaten to take her body as payment for what they’re owed — Yikes! And this is where the “daddy issues” start to come into play because, while Young-in was running away from debt collectors, her happy-go-lucky father, Son Il-gun (Kang Nam-gil), was ballroom dancing with his girlfriend.

Although it’s unclear if he’s paying for said dancing lessons with money he has no business spending (given his crushing debt), his carefree activity is a jarring contrast to his daughter’s harrowing experience, and already his qualifications as a father figure come into question. One would hope, given the important role Il-gun plays in the ensuing story, that he’d be likable enough to keep us invested in his character growth and redemption, but being a well-meaning and loving father doesn’t wholly negate the fact that he’s irresponsible. 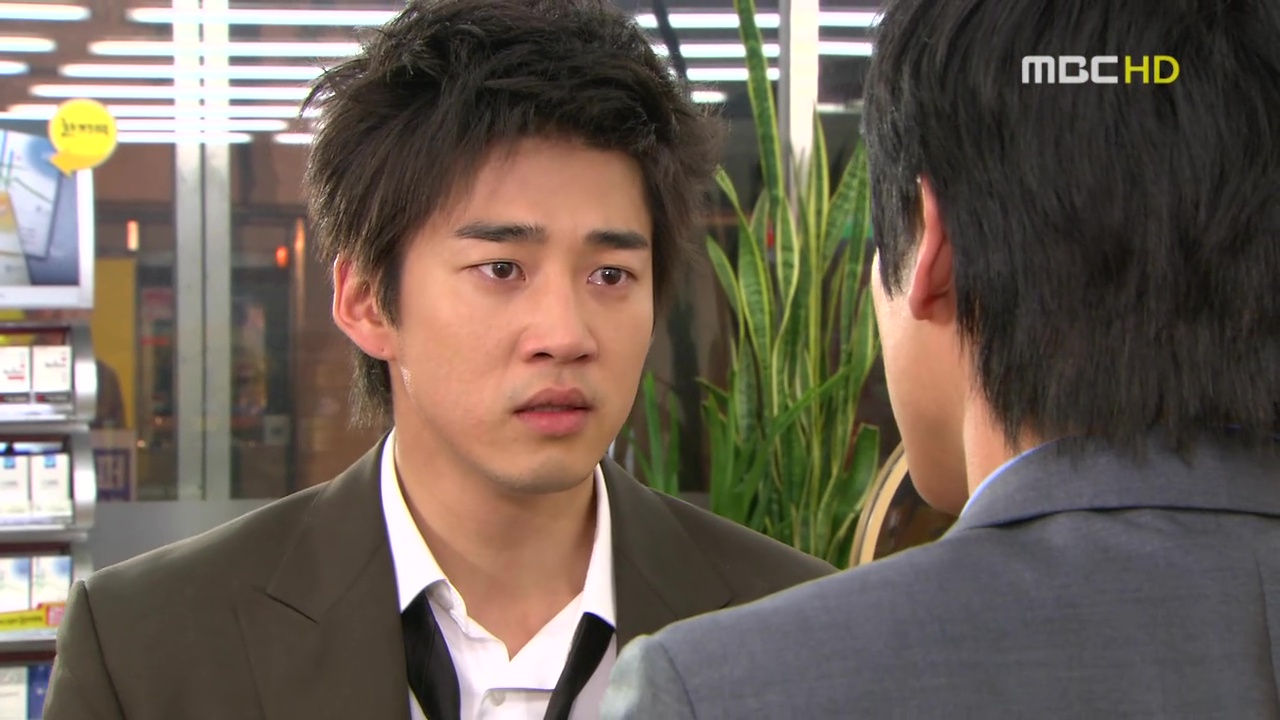 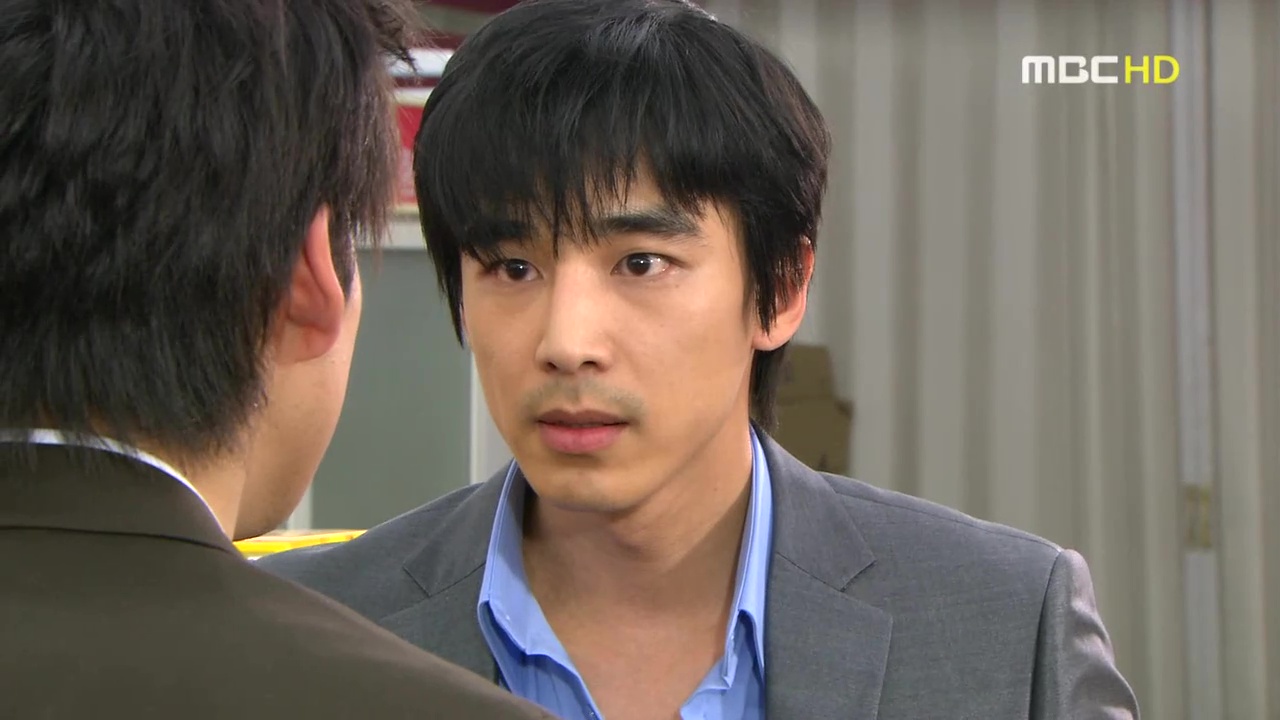 So what does the drama do to counteract his immaturity and provide Young-in with some stability? It inserts Young-in into a love triangle with not one — but two — significantly older men. Admittedly, Shin Jae-ha (Jin Yi-han) isn’t actually a legitimate contender for Young-in’s affections because, as we quickly learn, he had an indirect role in the accident that caused Il-gun’s death. And if aiding her father’s murderer wasn’t a large enough strike against him, he’s also masquerading as a Daddy Long Legs type of character in an effort to endear himself to Young-in and locate Il-gun’s missing paintings, which sky-rocketed in value right before his death.

The other man vying for Young-in’s attention is Cha Seung-hyo (Yoon Kye-sang), a perfectionist corporate raider with OCD, and to his credit, he doesn’t set out to woo a woman eleven years younger than him. Instead, he finds himself inexplicably drawn to her because, unbeknownst to him, he’s being periodically possessed by her father’s ghost. In seeking an explanation for his blackouts and his uncharacteristic behavior, he becomes entangled with Young-in — and the mysterious circumstances of her father’s (supposed) suicide.

I said there were some daddy issues, but thankfully, this drama doesn’t blur the line between Seung-hyo and Il-gun so much that it feels like she fell in love with her dad’s ghost (ewww), but there are some pretty awkward moments where the writers do play around with this not-quite-incestuous arrangement to create some (debatably) humorous dramatic irony. And just when you think the secondhand embarrassment can’t get any worse, Il-gun’s girlfriend figures out that Il-gun’s spirit is occasionally hanging out in Seung-hyo’s body, and the two women — who never got along to begin with — start competing for Seung-hyo’s time. 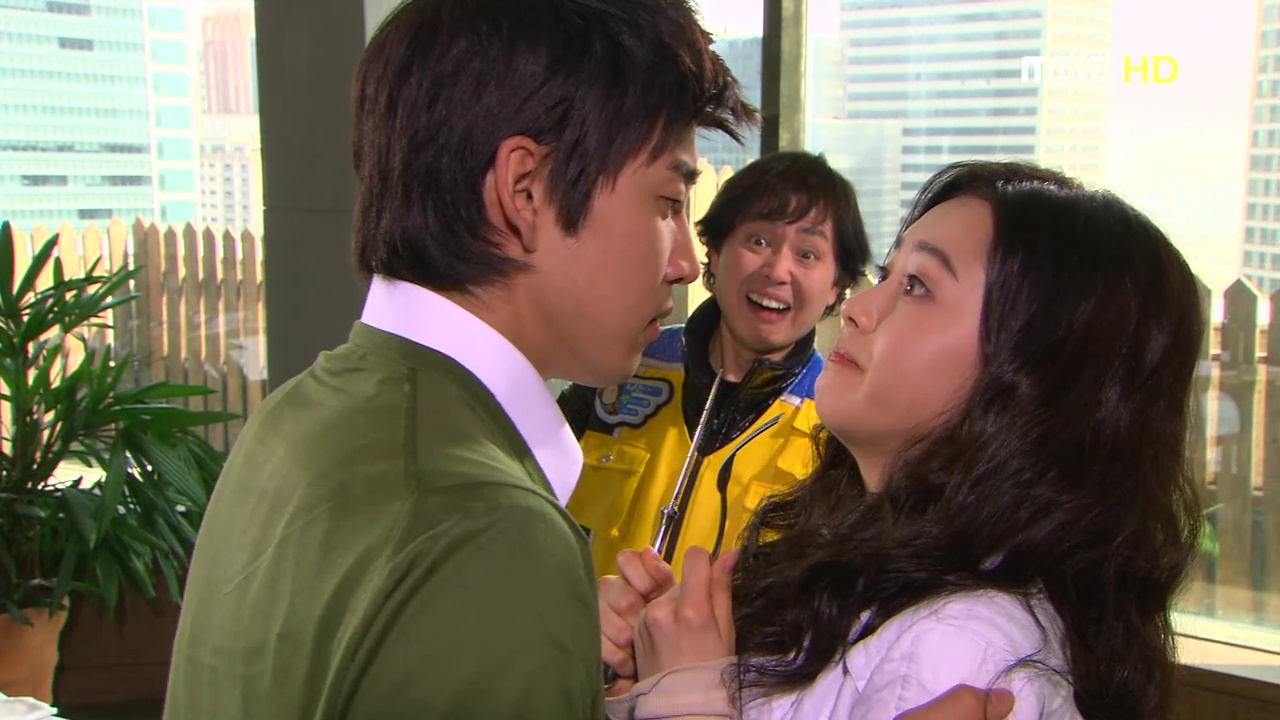 There’s definitely a basket full of craziness going on, but in rewatching this particular story, I also couldn’t help but compare it to the more recent Ghost Doctor (for obvious reasons). There’s a lot of similarities in the characterizations and physical comedy, which makes me feel fairly confident in saying that Who Are You? partially provided the inspiration for Rain and Kim Bum’s iconic bromance.

If writers are still referencing this drama, does that mean it has stood the test of time? Well, I think it’s safe to say it did not live up to my memory, but I still enjoyed the re-watch because Who Are You? has reached the point that it’s so bad it’s good. I wouldn’t recommend watching this drama if you’re looking for a quality story, but if you are the type of viewer who can watch trash TV and laugh at its absurdity, then I think you can sit through this drama and have a good time. If you’re still on the fence, though, I suggest watching the first episode, and whether or not you’re amused by the comically timed Truck of Doom will be a pretty good indicator of how much you will enjoy the rest of this particular K-drama. 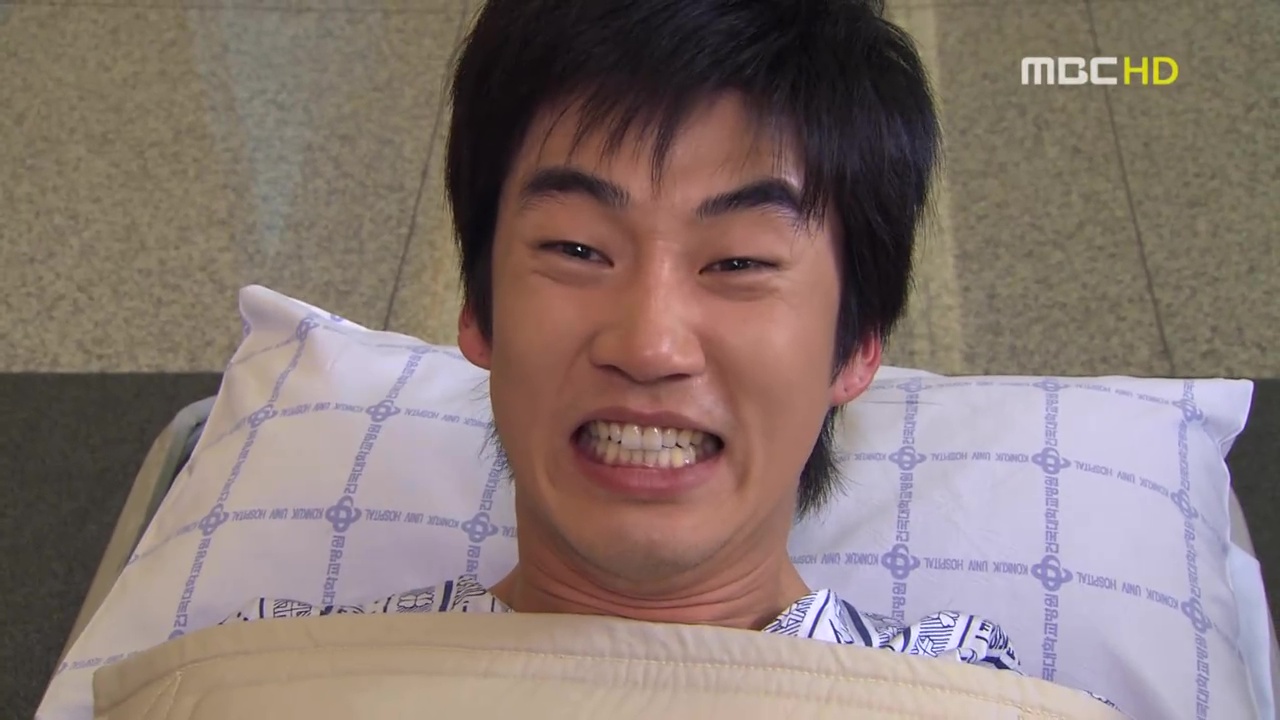 Wow, the timing is impeccable because I recently watched this drama, but unlike you it was my first time. I try to put behind my modern views when watching old dramas because there are a lot of things that wouldn't sit well, but even with leniency, it crossed the offensive line because the FL kissed the ML with the ghost dad still occupying his body. That was outright gross and unfunny for a drama which was thoroughly humourous at the start.

Yoon Kye Sang literally carried the show to the end because it is not easy for a single person to portray two different persons that too with physical comedy. The 1st episode was utterly uninteresting until Yoon Kye Sang captures the viewers' attention with his wacky attitude after being possessed by the FL's dad. His interactions with the ghost dad and his character growth were enjoyable, but the same can't be said for the romance or for the FL.

Initially the FL was very sensible and chased the ML away by calling him/his actions as creepy, but slowly she was written to become dependable on him and out of loneliness got attached to him. Also, Go Ara's acting did not help the FL character because she was still in her early career days. Her alternating between putting on a brave face and crying got tired very quickly, but the worst was her acceptance of her love for the ML even after knowing that her dad was occupying the ML's body. The dialogues given to her also were terrible because in one scene with the ML she would say, "Ajusshi, you can use me as a soccer ball to kick off your anger and it will make me happy because it would mean I can talk to you and be by your side".

Also, the 2nd ML character and his entire story was unapologetically boring.

Sure, this drama did have its fair share of funny and poignant moments, but it killed itself with its abhorrent romance angle. I do not hate this show or regret watching it, but I seriously will not recommend it. However, if you feel like risking it for Yoon Kye Sang, ensure that you use the fast-forwar button generously.

I know I watched it, but I have no memory about it...

Most of these are just my personal preferences and I could probably overlook one or two, but not all - and INCEST is my dealbreaker.

Thanks for the flashback, @daebakgrits! I always appreciate knowing what not to watch, too.

Yoon Kye Sang is so young! I think i could rewatch this just for the actors in it. But where oh where to find more time~

i remember crying a lot... i loved Yoon Kye Sang in this!

Agreed with the Beanies’ collective assessment that Yoon Kye-sang carries this show and is the only memory I have of this drama.

But, he rarely does comedy these days - so it may be worthwhile ff everything else to just watch him.

Oh the first decade of the 2000s with their incest-y storylines and uncomfortable age gaps featuring barely-out-of-high-school heroines matched with guys years out of college age. (Go Ara was 18 and Yoon Kye-sang was 30).

Lee Minjung (who played FL's friend in the wheelchair) and Lee Eon (one of the Coffee Princes, RIP) were cute in it

Oh man, this truly takes me back. I remember watching this week to week and read the recaps here too, this was pretty fun. Mostly I can't believe it was some 14 years ago, wow.