Kwon Sang Woo screws up love, but in a manly way 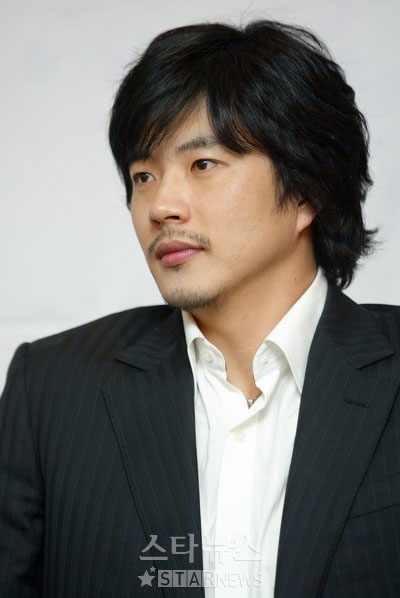 Kwon Sang Woo returns to television after three years in the upcoming KBS Monday-Tuesday drama (starting December 3) Wretched Love (a more apt but slangy translation could be “Screwed-up Love”), which is described as being different from “normal trendy dramas.”

(Frankly, it seems like everything is being described as “different” these days, which I think is more just an indication that the staples that made Hallyu famous are shifting in a new direction. I don’t think we’ll be seeing many more “standard” trendy dramas anytime soon, since everyone’s tastes have been whetted for deviations from the cliches.)

But Wretched Love is different because it’s not “soft” (connotation: sissy) and “romantic” (the writer uses those words like they’re insults), but rather, in keeping with its title, the melodrama depicts love that’s so effed-up it can ruin a life. The love triangle wears down its participants so much that it makes a person want to shout, “Love’s a bitch.” Sounds like a charmer!

Producers are counting on fellow masochists to watch this lovely-sounding scenario unfold and sigh along, “Ah, I’d like to love like that once too.” Sure, and I say life’s not complete until we all drive ice picks through various bodily appendages. The pain means you’re alive! (For now.)

After showing his tearful acting in such weepies as Sad Story and Stairway to Heaven, Kwon Sang Woo shows his “manly” and “intense” side in his new project (who else thinks the reporter’s being awfully chauvinistic merely from his/her word choice?). Cuz real men don’t cry about love, they ruin it, apparently.

As for his romantic (or should I say “wretched” and “miserable” instead, since romance doesn’t seem to be the order of the day) female lead, auditions are being held to cast the lucky lady who gets to be wrecked by tragic love. Can’t wait!

I can't wait to see this new series.I hope it is a good one.

Finally, a post on my first (still is) K celeb crush!
It's been 2 years since Sad Sonata..I really can't wait already!

like jo said... first real kdrama crush!well.. soompi title says its good love? or sad love? not so sure.. but heck.. me loves KSW... and watching him moves me to tears.. maybe more so here.. well.. how bad can this be? who will the hurt parties be?
lol.. i cant wait to see KSW again on dramas..

oh my goodness, how embarrassing, but he's also my first korean obsession and crush....I love him in Stairway to Heaven.

I feel that the drama industry is not doing so well these days...or not making interesting enough dramas FOR ME. T_________T

Latest news..that Lee Yeo Won will be the leading lady for the drama.
She was the original casted lead, but she backed out a few weeks ago. And suddenly, she's back again?!

Anywayz, as long as I get to see my KSW on screen.. I don't give a da*n on who the girl is..hehehe..

I can't wait too. It sounds interesting.

HAHA! I loved Kwon Sang Woo in Strairway to Heaven! That is how I got introduced to Kdramas, ever since that one I have been obsessed with Kdramas :D. I hppe this comming one turns out good ;)

This drama is definitely like no other dramas I have seen and I've seen a fair amount. Episode one starts you off on a roller coaster ride. My heart was racing up a storm while watching just episode 1 alone. Adultery had a different perspective altogether.

Hi there.. I was able to catch the first episode of this drama on KBS and I agree with Ina (11th post)... This drama is like one roller coaster ride... The story is really interesting and the scenes are are intense.. I hope it would be the same for the succeeding episodes.. :)

I love this actor very much.. he is grat in all his movies and dramas..
I watched him in Sad Love Story drama.. he was very very wonderful..
he is a very great, international actor..