The rise of Lee Jia 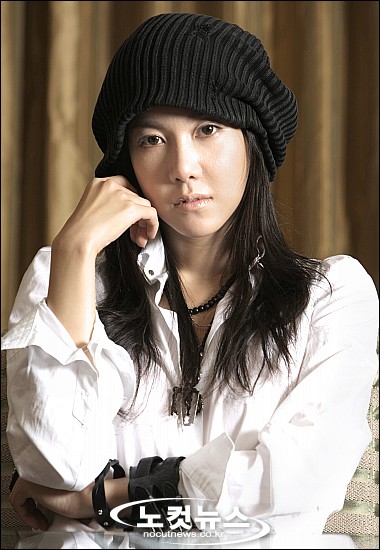 These days, actor Lee Jia is all the rage. An unknown name and face suddenly appears in one of the most expensive and most anticipated dramas of the year (Legend), alongside an extremely popular superstar actor (Bae Yong Joon), comes from America and therefore has little information available to curious fans, and manages to hold her own performing in her first leading role, which is also her first acting role ever. The level of curiosity surrounding her is only natural.

Lee Jia: Mysterious? Favoritism? Those words are so unfair!

On the receiving end of high expectations from her whole family, Lee Jia is not much different in that regard from her character in MBC’s just-ended series Legend. The woman who’s spent more than two years as Sujini in the drama that aired to extraordinary levels of interest has come out into the world. … 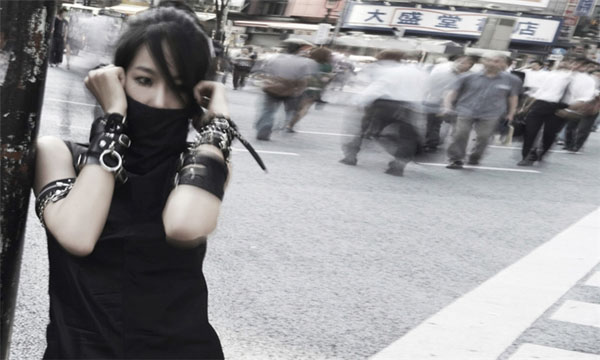 As there is little known about her, people wonder if she’s some sort of mystery or if she’s feigning coyness. She feels unfairly judged. Including the time it took to prepare for the drama project, she’s spent more than two years at the filming grounds — she just hasn’t had the opportunity to communicate with the public.

“I was born on February 2, 1981. After my sixth year of grade school, we moved to the U.S. and I spent the rest of my school days there. I had a lot of interest in anything that had to do with visuals, and enrolled in [reputed design college] Pasadena Art Center and studied graphic design. I hadn’t even thought of becoming an actor, but I had the opportunity to audtion for Legend through someone I knew. I thought art was only for things that moved people’s hearts and made an impression, but I find that an actor does that too. It appeals to me because you can immerse yourself completely, crying and laughing.”

She tends to hide her face and doesn’t enjoy appearing in front of others, but these days Lee Jia finds herself unexpectedly at the center of attention. And she bemoaned that her only (younger) brother avoids going out to eat with his suddenly famous older sister. 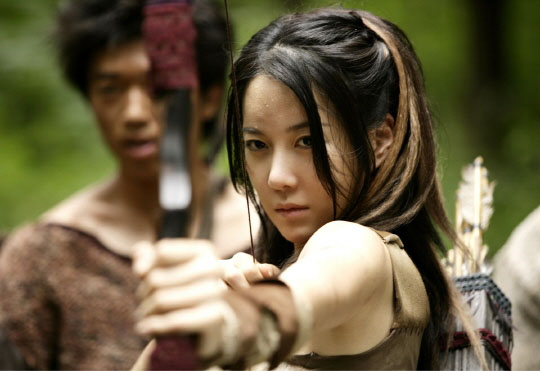 She won the part of Sujini after flying to Korea and auditioning more than thirty times in six months. Director Kim Jong Hak said, “She’s fearless and I like her self-confidence” and chose her. Thus brought to the filming location of Legend, even when finding herself amidst Hallyu star Bae Yong Joon, highly regarded actress Moon Sori, and other distinguished acting seniors, she was not timid and performed well — self-confidence is good, indeed. 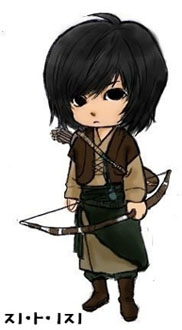 “I was surprised at Bae Yong Joon sunbae’s [senior] sensitivity and the extent of his care for others, which goes beyond what people might imagine of him. We only had one restroom at the vast outdoor Jeju set location, and he must have passed by to see how dirty it had become. Those of us using it had grumbled about how dirty it was but we hadn’t thought to clean it ourselves, but he had it cleaned for us. He even arranged for Japanese fans to visit the site. … Moon Sori sunbae has a soft voice which worried me, but she gave me lots of advice. Instructor Oh Kwang Rok would recite poetry for me from time to time. He also taught me the words ‘dalmuri’ [lunar halo]. Thanks to my seniors, I was able to complete filming without incident and things ended up pretty well, didn’t they?”

The most painful part of filming for Lee Jia was the ruby pendant of the Phoenix artifact. The smallish necklace, which fit neatly in one first, weighed a ton. On top of that, the suit of armor she wore weighed a hefty 20 kilograms, and it became habitual for her shoulders to throb when she tried to sleep. In the summer heat wave, wearing the many layers of clothing plus the suit of armor, then riding on horseback, was suffocating. In order to film the mythological era scenes, she had to act while wearing only one layer of clothing in midwinter, climbing to the top of a mountain among crew members wearing parkas. The memory of those dreadful moments are distant now. 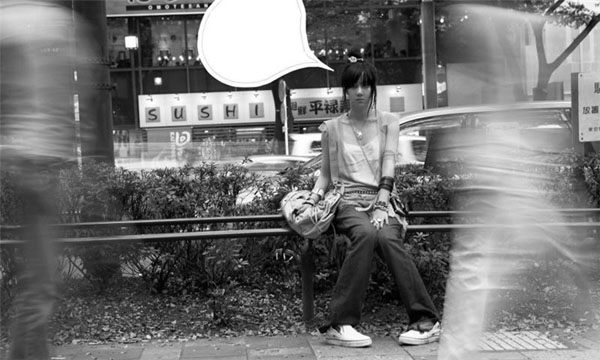 In contrast to the mischievous Sujini, in real life Lee Jia is the quiet type. She enjoys spending time alone, walking by herself or reading a book on a bench. When she’s at home, she lives in a quiet atmosphere uninterrupted by loud noises. Spending her solitary time in contemplation with space to think gives her energy. Although she says she hasn’t exactly felt the pain of a heart-rending love, she says that this “alone time” gives her strength. She likes to speed along the snow on her snowboard, an activity that suits her. She’s the type of person who takes a while to open herself up to someone, but once she comes to like a person her affection is long-lasting, and her last memories of dating are dim.

With her soft-spoken voice and gentle feminine beauty, enjoying a sweet latte, she says with a hint of impishness that she’s the first to seek out food when it’s in front of her.

“Because of the interest and expectations of many people I feel like I have to be careful over the smallest actions now. However, rather than compromise and be led around by others, I want to be the type of actor to keep my identity in the way I portray my roles.”

Her straightforward manner of speaking is similar to Sujini. May her future be blessed with the fire of the Phoenix… 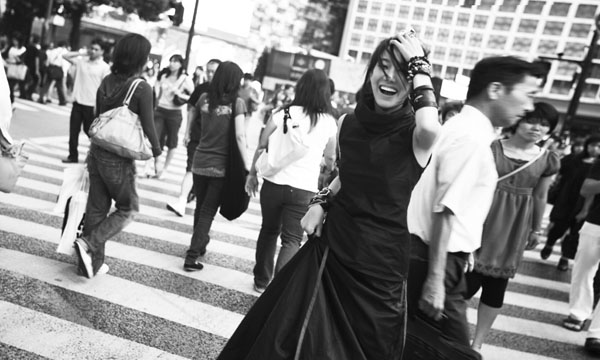 Thank you for sharing this article with us Beans..
I think Lee Ji Ah's a natural.. she was so good as Sujini altho it's her first time acting. I hope she bags the Newcomer award in the MBC awards..hehehe..

I think this is wonderful. It seems i don't know much about acting myself, and korean pop culture but this sure seems like their acting industries has been missing people like her for a long time, only relying on status and looks instead of heart in acting and arts :).

I wonder if I ever walked by her at Art Center....haha.

"She won the part of Sujini after flying to Korea more than thirty times in six months", wow, that's a lot of airfare. Is she rich? I can barely afford going from Boston to Dallas once a year.

I really liked her as Sujini, and think she will have a bright future as an actor, I hope to see her doing something new after the TWSSG hype dies down.

she's so cool.. i like how she values the art of acting & tries to stay true to herself...

She seems really interesting! I haven't seen The Legend yet, but after reading this, I'm going to give it a try the next chance I get.

she's one of the few newer actresses in korea I find interesting (along with lee hana). her charisma and natural poise are attributes that many of the "prettier" actresses lack. plus, she likely has talent in the arts if she went to pasadena.
i look forward to seeing her in other projects and hope she lives up to the expectations.

Lee Ji Ah's website is also the business too! Even without knowing her roots, you can definitely tell she's "local product", so to speak. I wouldn't be surprised if she came up from the OC (Fullerton, El Cerritos, etc.)

Lee Ji Ah and Lee Ha Na really stand out because both had strong boho sensibilities (Ha Na's dad was a composer, and she was a music major . . 4 realz!). They would be the kind of actresses who would show up in an In Jung Ok drama, offbeat, offcenter, and really interesting.

I adored her in Legend... I thought she was amazing, especially since it was her first acting role. And I had no idea she lived in the US!! Now I respect her even more, lol. Thanks for that article... she sounds like a really great person, and someone who would make a great role model. I really hope she shows up in more dramas/movies... she has the potential to be one of my favorite actresses if she takes on more roles.

Did not see The Legend, but she sounds very likeable. Hope that she'll be able to maintain some sense of normalcy and privacy while pursuing her acting career. I also hope that she'll continue with that graphic design study...

I was speechless when I saw her photo in the website. I could say it was so amazing. She have the model look and she's really look good in any of the way she pose. Fantastic! Keep up the good work, Ejiah. Hope to hear more news about her and more shows for her to act in....

Lee Ji Ha is so very very pretty i love her so much...

i love u Lee Jia

I've just finished watching the Legend a few days ago and I also started to like her a lot.

Lee ji ah,that name no familiar in entertaint industry korea drama,but when she act in the legend,people want to know but her,she new but she good actor

oooooo
its too bad that people didnt think her acting was good in her next few dramas
:(

"I had the opportunity to audtion for Legend through someone I knew." <- LOL, we know that that someone is Seo Taiji now, eh?

I'm having mixed feelings about her right now.