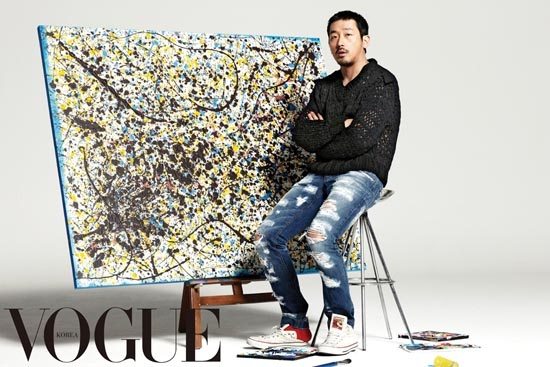 Actor Ha Jung-woo is exploring his creative side with an individual exhibit of his artwork (his first ever), which will be on display for the next month at a gallery in Yangpyeong, Kyeonggi-do. A recent spread in the March issue of Vogue magazine also featured a few of his paintings, pictured here.

This opportunity came through a bit of happenstance; a scriptwriter on Ha’s movie team had seen photos of the paintings in Ha’s cell phone, and made the recommendation for the exhibit. Curators then visited Ha’s home to take a look at his work, which led to the planning of this show.

Ha is currently filming The Murderer, which reunites him with director Na Hong-jin of the hit thriller The Chaser, and said, “I act as a murderer at night, and paint in the mornings. Acting alone without an opponent, I feel these pressing emotions. I take those feelings home and paint with them.”

Regarding his interest in art: “It began in my university days as a hobby, and I started painting in earnest starting in 2007 because I wanted to give my father [actor Kim Yong-gun] a painting to cheer him up.” (Ha seems close with his father and younger brother, who is also trying to break into acting; the three have lived together since his parents divorced some time ago.) He also explains that Go Hyun-jung, Kim Hye-soo, and Yoo Hae-jin encouraged him in his artistic pursuits, and he has also painted together with his girlfriend, model Go Eun-ae.

The exhibition opened on March 6 and will run through April 4.

Interesting! Quite a talented artist, eh?

Is this the same gallery that was used in the series Who Are You?

is it just me, or the gallery look an awful lot like the one in 'who are you?' is it the same one?

hey, that's the gallery from who are you, isn't it? neat!

The one in the first picture looks a lot like a Jackson Pollock...

It's nice to see that he has a healthy way of letting out those pent-up emotions from acting a murderer.

haha, I was just going to same the same thing!

yes look like a fusion of kandinsky and jackson pollock. but still a talent!

That top painting he's sitting next to is just a JACKSON POLLACK look-a-like. If he did this in the U.S., he'd be criticized big time for passing it off as his own original work.

Hahaha, I'm glad I'm not the only one who noticed the gallery! I think it IS the one from Who Are You. :D

I really like the black-and-white painting from the group picture.. It looks like a galaxy or something. I'd totally hang that in my apartment. :)

I really like him! his acting and charicma makes him different and more successful for me!
a real artist is never one sided talent as we can see it with him!

a very talented man he is!

Nice work!
I liked him in Lovers in Prague.. I wonder what else he has done....

Omo, I never knew he could draw O_O These are amazing. I wanna see more =) Thanks for translating

I liked the look of the swirly blue/purple one in the 2nd photo.
and, with the risk of being repetitive, HEY! Its the art gallery from Who Are You! *has a fond memory of WAY*

just finished watching H.I.T...sex on legs the man is ; )