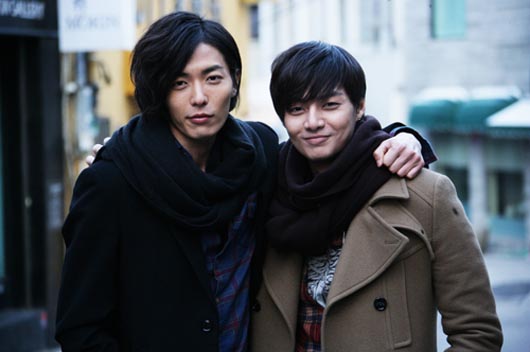 Wow, I almost didn’t recognize Kim Joon in the above photo with Kim Jae-wook; these stills are from their Korea-Japan co-production of a mobile drama called Pygmalion’s Love.

Shoots began in February for the project and the first installment will be released on March 20 through mobile provider BeeTV. There are a total of 12 episodes, with one released every Thursday.

Kim Joon is a cutie.

why does he step in to take her boyfriends place?

Both guys look good. I wonder if this will be subbed. It'll be the only way I can watch it.

Looking forward to this show & hope that he will have more show for us!

Kim Joon--great chance to show off his chops, loved Kim Jae Wook in the coffee prince....they're both lookin good...thanks

Nice... I really hope there is a way to follow the story's progression online.

@ Carinne
Oh I was thinking the very same thing

Wow, Kim Joon's looking good. I hope there's some way us non-subscribers can watch this, because it sounds interesting. (Although I can't imagine why they'd need a substitute boyfriend, but whatever. Maybe KJ's character dies or something. o.O)

where can you watch this?

ahhh.. they are both in my ICOMYM harem. such cuties!!!
hopefully some nice BeeTV subscriber has pity on us lowly non-subscribers and posts this somewhere accessible. i'm sure i'm not the only one who would be very VERY grateful. :)

why does he act as her boyfriend..? or maybe she misunderstood him...:-?? and jae-wook is so cute holding that placard...^.^ :x

Ohh it's the girl from "AKai Ito." Akai Ito was a really good drama.

I didn't recognize him until I started reading the article!

where i can watch this drama?

looks interesting. Would not be able to watch this unless i find it online, so please keep us posted.

I feel a massive wave of m/m slashness coming my way...

kim joon such a hottie!!

I'm excited!! This is so exciting!! I love Kim Jae-wook!! And Kim Joon is adorable...and I love any collaborations between Japan and Korea...

Wow...The Last time I saw him in person was back in December for a one nite gig in S'pore with long lock, now his superliciously fantastic hairdo suits him.
Jae-wook... I have no words to describe you! You are just PURRRFEEECCCTTTT

@18
Yes, she is. Akai Ito is one of my favourite dorama, not just ordinary high school dorama. It's kinda given the same vibe as WISFC but I think the storyline is more rational and plausible (IMHO). I also love the two main leads.

anyway, I'd really love to see this mobile drama. I'm a fan of KJW, but Kim Joon also looks great in those stills. :)

i think this is going to be a good drama .. whoahh it's exciting .. i think i found my top lister drama :)

Minamisawa Nao is not yet as popular as other young actresses in her agency(Meisa Kuroki and Maki Horikita are more popular) but she is getting more attention mainly because of akai ito the drama and movie.

Kim Jae-wook is good looking as usual, his japanese really is so fluent and no accent I though he really was japanese in coffee prince.

Huh, Kim Joon looks pretty good. Wonder if he's a decent actor, we couldn't really tell in BOF. YO WHAT'S UP MY BRO

32 grace, the one from Jersey, USA

I'm all in favor of the information highway, but could somebody slow
things down just a little bit, for those of us who are technologically
challenged? Doesn't it seem as if new technology makes old technology
become obsolete awfully fast? I really hate the idea of anything bootleg,
or having to beg Internet experts to make this kdrama available to people.

Ahhhhh, for the good old days of long ago ~
Turn on television ~ sit on chair ~ watch kdrama ~ end of problem. :)

That being said, I'm so glad that the "4" of "F4" will be in this new drama.
Whatever few scenes Kim Joon was in, during BBF, he added a special
ingredient.....either logical, wise, kick butt, or his own brand of sparkly charm.
And I think that his gangster Engrish was a brilliant way of easily creating
a definite presence for his character among the other three "F4" guys.

33 grace, the one from Jersey, USA

OOPS!
What I meant to write was:

I got the feeling from the last picture above is that Kim Joon's character is dead. I think the story is that Kim Joon is dead and the girlfriend can't remember that he's dead, but feels that she had a boyfriend so Kim Jae Wook steps in as the boyfriend. Haha....I don't know so don't quote me on it. Kim Jae Wook is a good actor....I'm glad he's getting so many new projects.

hell with ythe others!!
i only love jae wook oppa T_T

hell with the others!!
i only love jae wook oppa T_T

hell with the others!!
i only love jae wook oppa T_T

I totally can't see Kim Joon in that first picture o-o srsly .. its secretly someone else i swear o-o