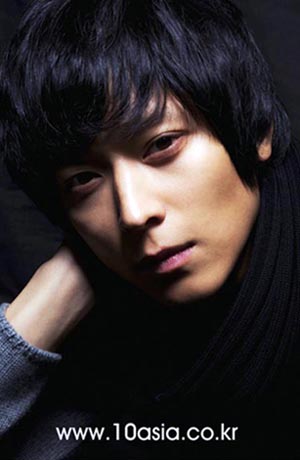 Good news! Actors Kang Dong-won and Go Soo will be acting together in a new movie, a thriller-comedy (!) titled Psychic [초능력자]. Go Soo’s casting has just been finalized, while Kang had been attached early on in the process.

Kang plays a man possessing supernatural skills, while Go Soo takes on the role of Kang’s rival. Both actors are coming off some strong projects, which heightens anticipation for this one: Kang’s action-fantasy film Jeon Woo Chi and thriller Secret Reunion both performed solidly, while Go’s coming off two buzz projects, the dark film Into the White Night and drama series Will It Snow For Christmas.

Psychic comes from production house Zip Cinema, which produced Jeon Woo Chi (starring Kang Dong-won), Antique Bakery, and A Bittersweet Life. It’s also a commercial-film debut for its director, Kim Min-shik. It will begin filming in May, and aims for release later this year.

Am so excited that Go Soo has a new project. (Jumping up and down!)

Too much yummieness in one movie!!

Psychics? I am intrigued by metaphysical matters, so I will look forward to this how good these actors can make use of such skills.

More KDW and GS is always good news, and I like the fact that they're together even better. *_*

And a thriller-COMEDY? That's intriguing. :3

Sounds good to me....very interesting! If Go Soo can use the same kind of stare like he did in Will It Snow For Christmas it will be fantastic! That piercing type of look that makes a person feel like he's looking right into their soul! :-)

Look at that delicate fine boned face of KDW.
That's not a nice picture of GS.

YES! YES! YES! Thank you 2010 for giving us all of these great pairings so early in the new year!

Trust me. No it isn't. This movie ROCKS. It ties the different elements together in a disorienting but wonderful mix, and DOES NT USE ANGST TO DO IT. The humor isn't even macabre. Kang Dong-Won is the center of this movie. But it does segue nicely into an open-ended conclusion for Go Soo's character. (Somewhat. It points and waggles its eyebrows a lot.)
I wish they'd make a sequel so that I could watch these two against each other again; I wouldn't even mind the plot contrivance they'd need for that to happen. Much.
Especially if they give us a reversal of power positions. It's nice to dream.

Oh ma gosh! My two favorite actors! I'm gonna watch it, I dont care whether the movie is bad or good.I'm so hyped!

Sorry javabeans but I didn't hear a word you said (or, uh, wrote). I was too busy being lost in Go Soo's eyes... again!

GO SOO! -hugs computer screen-
I've been meaning to see Into the White Night for a while though. Does anyone know of a site where I can view it online? If not, I'll just have to head over to H-Mart and rent it...like asap.

Oh, right! MINE. (After you, Javabeans. Sigh)

Can't deny that I am excited. Hope it will e a good movie. Both actors come off glowing on the screen.

It's not good news, it's GREAT news!

Kang Dong Won sure has been going on a roll last/this year. From Jeon Woo Chi, Sworn Brothers, Camelia to this new movie. How does he manage to be so low profile given all the (good) publicity his movies have been gaining? Makes me wonder..

But still can't deny I'm already loving the cast in here. Kang Dong Won's dear to my heart and Go Soo's one fine actor in the making. We'll definitely have a feast of intense-eye-staring in the movie for sure. Both actors have unbelievable eye-acting skills!

OPPA when You will Go to Army??..
i want him to "loose " his burden anyway.
i hope he is not like another actor who made fake medical report to evaded compulsory army service .

KDW have a Pride!!..
i alwayas anticipating him

KYAHHH! That would be a dream come true to see my 2 favorite Korean actors in one movie (drools). I hope KDW signs on officially (crosses fingers)

don't know what the hype is over KDW. i don't find him hot or anything. his acting is just bleh to me. don't hate him, don't like him either. he just leaves me cold.

@meh if you don't like KDW then don't since no one's forcing you but do you have to say his acting is bleh to you. if you don't find him hot or anything and you feel that he leaves you cold then why even bother commenting something bad about someone because you're hurting other people who are fans of his.

Will It Snow For Xmas - that's a buzz project? I don't find this seies in the same leauge as IRIS or Chuno. I fell asleep trying to finish this series.

@27,
Yes, Will It Snow was a buzz project for Go Soo. Buzz doesn't always mean IRIS levels of popularity; Will It Snow maintained a sort of medium hum, but the praise for Go Soo specifically was strong. You don't get nicknames like 고수앓이, 고비드, and 고느님 for nuthin'!

I found GO SOO was very convincing and attractive in Will it snow for X-Mas.
I became his big fan since 1st epi I saw him .Thanx javabeans for good news.

GIRL SQUEEEEEAAAAALLL...
Omo, this is going to be awesome :)

Ko Soo's movies or drama are always make me happy and excited to watch...
he is such a great actor...not only handsome and awesome..he's also talented... very bright actor.....

i love go soo very much,i am so excited

only go soo!i am so happy