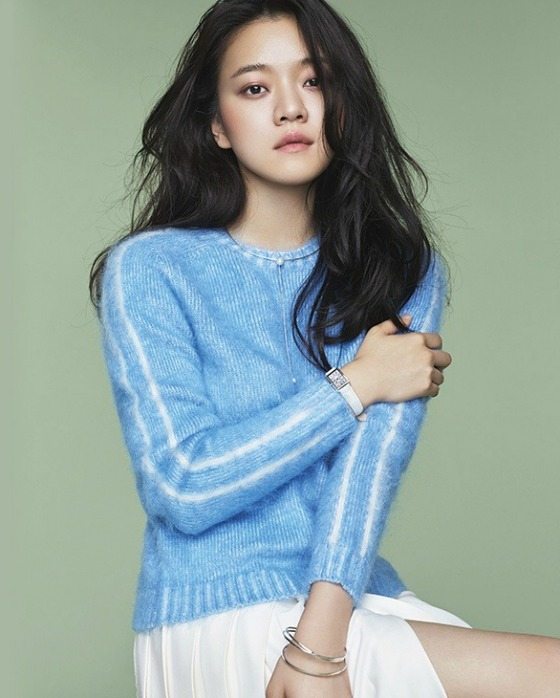 It’s always good news when a talented actress is headed back to dramaland. Go Ah-sung (Heard It Through the Grapevine) has been offered the leading role in MBC’s new Wednesday-Thursday series, a workplace drama about a rookie employee called Radiant Office. While the young actress been keeping busy with films (A Melody to Remember, Right Now Wrong Then, Beauty Inside, Office, Snowpiercer), it’s been nearly two years since her last drama Heard It Through the Grapevine, where she played a teen mother. Go Ah-sung started out as a child actress and has transitioned to adult roles pretty seamlessly, and she’s one actress I’d love to headlining more dramas.

The script for Radiant Office won an open screenwriting competition this year at MBC, and it tells the story of a temporary office worker’s first job. Go Ah-sung is up for the lead role, a young woman struggling to get a job and weary of constant rejection. She’s failed to get hired so many times that one day she gives up and jumps into the Han River.

She’s rescued and taken to the emergency room, where she discovers that she might be terminal. And that’s when she finally gets a job at the company she’s been hoping to work for, as a temporary hire. She makes the decision then and there to start living her life like she’s in charge, and the drama is about her first steps out in the real world, where she’ll encounter all sorts of challenges in the office, and even find romance there.

It sounds like a slice-of-life workplace drama that’s aiming to be relatable and uplifting, and my hopes are up that it’ll have a great leading character because they’re courting Go Ah-sung, and she tends to be choosy with her roles.

Directing will be PD Jung Ji-in of daily drama Another Victory Tomorrow. Radiant Office is due to follow Missing 9 (after Weightlifting Fairy) on Wednesdays and Thursdays beginning in March.

I'll watch it. Cancer or not. Just because she was so wonderful in her last drama. Not flashy acting just believable and convincing in her potraying her character. And if she is fussy over her drama choices I would trust that the screenplay is good.

If she works at Subway main office, she might be cured.
In Subway we trust!

Tomorrow Victory is ranked #8 in top search (foreign drama) in my country.

Good to see Go Ah Sung back to small screen, but I really worry about PD.
So The King Loves now push to May 2017?

Grapevine was a masterpiece that doesn't get even a tenth of the love it deserves - probably because it's so cynical and gave everyone, even its main protagonists, so many grey areas.

I hope the script on this one is solid, if she takes it. If dramaland wants to finally start paying attention to talent and content when casting/commissioning dramas (since the game is up with China), I would be all in support of that.

I'm so sad that brilliant directors like An Pan-Seok are not given enough projects. I thought that she would come back if she would work with him again.
I hope it's because he is just being picky. I miss him the most.

I'm excited to see her back but I'm not sure about the people behind this drama.

Oh, Pogo! I just finished IHITTG and I second your sentiments. There is good reason why it won best drama over Misaeng, Punch, Kill me, Heal me and Yoona's Street at the Baeksangs.
I read it was as impactful as Misaeng in Korea, but for modern day family relations rather than the workplace.

I am devastated that Dramabeans hadn't recapped it.....it was so challenging to go "off the reservation" and attempt to understand all the underlying meanings and societal references without my usual support system.

If anyone's listening in 2017, I cast my vote for a review/recaps of this most excellent drama.

I would be more thrilled if her partner is Lee Joon! But Go Ahsung alone is already making me enchanted.

Its official, 2017 is the year of Workplace dramas!!

I find that Go Ah Sung kinda looks like Esom with a dash of Han Yeri, or is it Bae Doona? Maybe when I watch all three in various projects, then I'll be able to differentiate in acting style.

All the MBC dramas that have won competition have had a unique an important message even if not totally perfect( eg. Angry Mom). So I'll be looking out for this.

I used to get her and Esom mixed up in pictures!!

Go Ah Sung is back. Yes! Hope 2017 will bring more talented movie actors back to dramaland. It is good news to see the names like Go Ah Sung in the middle of casting of popular faces nowadays regardless of the acting talent.

Also, I'm looking forward to see talents like Han Ye Ri, Kim Tae Ri and Kang Ha Na headlining drama. I want them to stay in chungmuro but going back and forth to dramaland will be better. Because kdrama viewers who rarely watch movies need to see what is the real talents. In 2016 we got to see Park So Dam and Kim Go Eun in drama, although their drama /roles dont give so much justice for them. But one good thing, they gain many new fans.

Love my indie girls from Chungmuro!

I have missed talented young actresses who has left the shallow drama world for film scene. Go Ah Sung i find to the best young actress i have seen in korean films, dramas. I have waited for her next drama since Grapevine.

This fall i saw her here in a Swedish cinema in very little role in famous korean indy directo Sang Soon's move Right then, Wrong now.

MBC has started a new trend for small budget indie movie-ish dramas which I hope continues. First louis and then kim bok joo [ which I am not watching, but still the spirit should sustain].

I just finished rerunning Heard It Through the Grapevine. There are no words for how good she is. I'd be glad to see her back in anything.

Even Kdrama casting directors know not to bother her if the script isn't good! That's very cool that it wrote a scriptwriting competition and it also means the script is complete and ready for her to review. If she agrees to the role, I am absolutely watching this!

Yay!!!!! Happy New Year to me. Love this girl just as much as I love Han Ye-ri and Kim Go-eun.

Yes, please. I am so thirst for female talents on screen!!

can't help but the portrait of her back in "Office" still clearly. but I'm glad in this drama at least she's not psychopathic girl anymore.
yay for me!
give me a good male lead please!