D.O. and Park Jin-ju up for new film from Sunny director 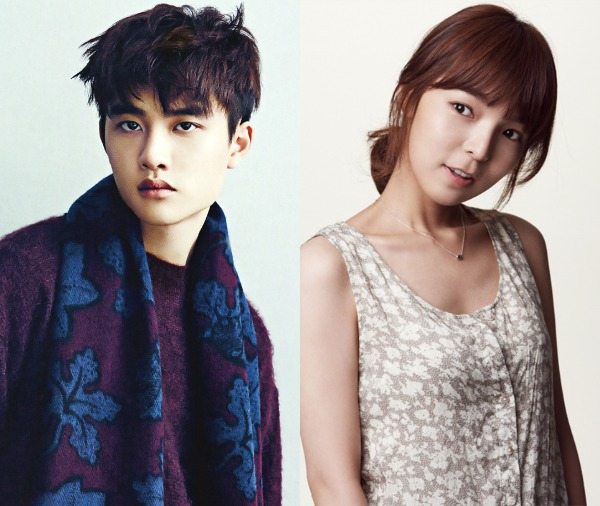 Oh, this sounds potentially really, really good. Director Kang Hyung-chul, of box-office hits Speedy Scandal and Sunny, is returning to helm a new wartime film titled Swing Kids, and EXO’s D.O. (My Annoying Brother) is up to play the lead. I’m slightly more excited, though, to hear that Park Jin-ju (Jealousy Incarnate) will be reuniting with the Sunny director, where she played a scene-stealing, foul-mouthed high-schooler. Not to say I don’t think D.O. will be great; I’ve heard good things about his acting, but haven’t caught his projects since It’s Okay, It’s Love, which was forever ago.

The plot itself sounds quirky and small in a way that feels right up this director’s alley. D.O. will play a North Korean soldier held prisoner in a POW camp on Geojae Island. Set in the middle of the Korean War, the story sounds pretty grim until we learn that this young soldier has a passion for tap dancing (lol), which seems to be the film’s focus. No word yet on Park Jin-ju’s character, but it’ll be interesting to see how she fits into the story, since it’s set in a POW camp.

I’m hoping that this director will pull another Sunny and give us a charming little story set against the backdrop of significant historical events. Sunny itself took place during a very turbulent period of South Korean history, with dictators, widespread student protests, and an eventual transition towards democracy, which were alluded to in the film.

The film is still in the casting phase and hopes to start shooting this fall, which means we can expect Swing Kids to release mid-2018 or so. I will definitely be checking this out when it does.

I've only ever seen Park Jinjoo as the lead's quirky friend, so I'm excited to see her take on a lead role hopefully.

She was great in Jealousy Incarnate, so I'm glad that she's getting more opportunities.

Anyway besides him sporting a new cut for the movie, Scandal Makers and Sunny were both blockbusters, so both of them will be in good hands.

just when his hair is already growing too :'(

Hoping he won't cut his hair until after their comeback in July... That would give us at least one music video with his longish hair, right?

Great news. I love both Park Jin-joo and D.O. and will definitely check this out. Though I super miss him in small screen. 2 hours isn't enough.

You should just watch d.o.'s acting in Hello Monster or Hyung to get excited for his projects like .. Forever ?

Hello Monster definitely; I was impressed, and I didn't even know he was an idol. Not sure I am particularly interested in tap dancing plots though :-)) , but I'll have to give it a try...

I like D.O. but im also more excited about Park Jinjoo. And Sunny is a fave of mine so im totally in for this one.

Yes yes yes! I adore D.O as a singer and actor and loved Park Jin -ju in Sunny as well. This is one film I'm definitely watching.

Very excited!! Both of them are pretty good actors

I'm looking forward to this..been a fan of D.O since his take of a serial killer early on the drama I Remember You..man, his acting there really gave me the creeps..

So excited to see Kyungsoo get more acting offers. This seems like a great opportunity for him and I'm curious to see how he transforms into this character.

There was a musical titled Roo Kisoo a few years back, so I wonder if this production will be a musical too.. which would be hella awesome since both are wonderful vocalists~!

Looking forward to this! If this movie is anything like the American film Swing Kids it will make me cry like a baby...

I thought I was the only one that made that connection. I wonder if the sharing of names is the only thing they have in common though.

Right, that's what I'm wondering too! Cause if they were supposed to be similar, it would make more sense for the movie to be set during WWII/the Japanese occupation and for D.O.'s character to be into swing dancing..

This news just made me excited. I like the sound of the plot and I loved Sunny I'm also excited for the actors ♥

If he chooses this, it will definitely be heartbreaking. Pure Love and Hyung almost killed me.

I saw Hyung, though the focus was more on Jo Jung Suk, D.O. did a good job. and if you haven´t seen I Remember You /Hello Monster, he was pretty damn convincing as a young psycho, I would say he embodied the nature of Lee Yoon Young better than Choi Won-Young. But I am not sure how much of why he manages to impress is his unique looks, especially the intense eyes, that do half the job for him, and how much is the acting.

looks like someone is giving me thumbs down even to positive comments. can´t please please.

Aw, I loved both Speedy AND Sunny! Such good movies. <3

I like D.O. He's actually pretty good and Park Jin-ju is always quirky and fun. This is a very interesting pair. I'm not all over the plot, but this sounds like it could be a fun watch.

I'm getting ready for the laugh with Park Jin Ju !

Off topic perhaps, but I so wished that Park Jin Joo would have joined the Running Man team. I have got nothing against Jeon So Min but I thought PJJ displayed so much more courage, genuineness, wit and energy when she guested on RM with JSM.

D.O. was good in My Annoying Brother! I also love Jinju! I've only seen her in 1% of Anything and Jealousy Incarnate and I'm glad she's given bigger roles now!

The exo guy has only one expression, cannot tell whether hes laughing or crying,
He's height and looks gives image like a country bumpkin so that make him feel slightly less idolish, thats only advantage he have.

I don't know why Happy feet crossed my mind! ^^

The plot is the complete opposite of me & I don't do films much. But I'm so watching this!

Also, their outfits kind of match.