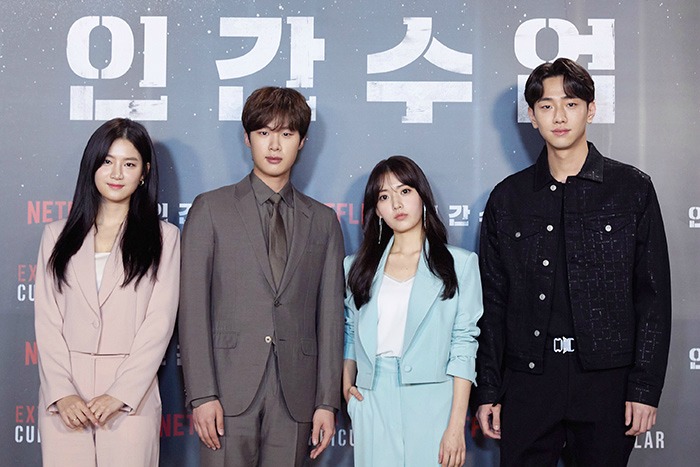 Netflix’s newest upcoming original drama Extracurricular drops tomorrow! It’s kind of a big deal when Netflix produces their own K-drama, and previous offerings have boasted really great production quality, and interesting stories (zombies, emotion-reading apps, AI romance, and more). Extracurricular isn’t Netflix’s first foray into youth dramas — they’ve done two prior, and quite nicely — but this is the first time they’re doing it dark. And Extracurricular (at least what they’ve let us see of it) is pretty darn dark.

Our lead is a model student played by Kim Dong-hee (who most recently made waves in Itaewon Class). He’s forced to lead a double life: our boy has turned to crime in order to earn enough for his college tuition. When a fellow student (Park Joo-hyun from A Piece of Your Mind, whoa!) uncovers his “extracurricular activities” they spiral into something even darker.

The premise might sound a little extreme, but it looks like the drama will be an interesting exploration of what happens when people value money above all — and then have to live with the unpredictable and irrevocable consequences of their actions. I do like that the drama will look into the gravity of the choices that are made, and the lengths to which our high schoolers are willing to go. Digging into the human condition can make for quite a juicy story.

A drama with a cast of fresh faces is always exciting, and in addition to our leads, we have Jung Da-bin and Nam Yoon-soo playing an iljin couple. Add a veteran actor like Choi Min-soo into the mix (he always wows me), and it sounds like a pretty compelling drama awaits us!

But perhaps the real question that you want answered is whether this drama will be complete when it is released, or if we’ll have to suffer through a similar fate with Extracurricular as we have with Love Alarm. Sadly, there’s no clear answer on that, but I’ve got a hunch that the drama will be released in its entirety. Or maybe that’s just blind hope speaking? Either way, for those that like a good binge watch, Extracurricular has some pretty perfect timing.

I will always remember her voice.

The suspense is over; all episodes have been uploaded on Netflix

Does Episode 10 end on a cliffhanger for a potential Season 2?

It's an open ending so highly likely to get Season 2 if this drama is popular enough.

Ugh, this is what I hate about Netflix. Thanks for letting me know, so I can binge it in its final season!

Really good acting by actors (especially ML and both FLs) but story is rather frustrating. I would have also not watched this if I had known this doesn't get completed in one season. I personally felt like wasting my time here

I'm happy reactions to this drama have been positive.

I regret watching Love Alarm despite knowing it was seasons, so I've sworn off Netflix dramas until they end.

It actually felt pretty complete to me despite having an open ending. I really don't know where a Season 2 could go that would be interesting.

Hoping Waiting loved this drama Kudos for the leads and the casts.

This isn't my thing at all, but I hope it does well. According to Kim Eun-hee, the Netflix format is more comfortable for Korean writers, and I imagine the same was true for the rest of the Kingdom team. Even if as part of the audience Netflix's interference with dramas is frustrating, if there are less deaths of staff members etc, I'll be happy.

Kingdom reported consecutive staff deaths on set for both seasons. I sense an irony here.

4 bebeswtz❣️Xiao Zhan is my happy virus

And to answer your question, @missvictrix , I just checked Netflix, and all 10 episodes have been released all at once 👌🏻👌🏻

I wonder how much money NetFlix is putting into it's k-shows? Most seem to have better production value than the Korea only shows.

Most of it's collaborations are with Studio Dragon who pour a lot of money into its productions. Their shows always look sleek and very professionally done.

it looks like a mutual agreement/benefit — with studio dragon given more production freedom and netflix with it's worldwide viewership.

Oh geez, Kim Ji Soo is here! Will she recite a poem and sound extra mellow?