One planned comeback, one failed one 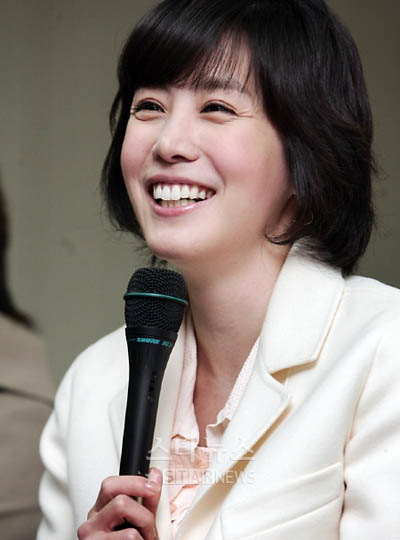 Actress Kim Jung Eun always makes me a little uncomfortable watching her because of the vaguely alien look her face can give off — the product of extensive plastic surgery, which the actress has openly admitted (surgeries, not alien-ness). But she’s one of the more talented drama actors working these days, and her next project has been announced (it’s the follow-up to 2006’s Lovers, co-starring her current boyfriend, Lee Seo Jin).

She’ll be returning to TV in a 16-episode drama based on current bestselling book My Sweet City, written by Jung Lee Hyun, which will be directed by the PD behind Mermaid Princess and I Love You, Miss Mal Soon, Park Heung Shik. The drama hasn’t settled upon an airdate, but begins filming at the end of January. 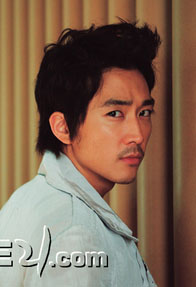 On the other hand, pretty boy Song Seung Heon‘s comeback project after his return from his two-year military service has fizzled. He had planned to star in Persona, a joint Korean-Turkish production considered by KBS2 (formerly called Speed, which at one point had cast Lee Seo Jin — yes, Kim Jung Eun’s very own — and Lee Da Hae), but due to various reasons, that project has been canceled. He’ll turn his attention instead to the film Destiny (Sook-myeong).

It’s interesting to track actors after returning to the biz after completing their mandatory military service. While fellow actor So Ji Sub, who’d served at approximately the same time as Song Seung Heon, also had his comeback project (Cain and Abel) canceledpostponed yet again with no definite air date, Jang Hyuk has had one very successful hit (Thank You) and is currently starring in Robbers (Bul-han-dang) opposite Lee Da Hae — the same one originally slated for Speed. Yep, it’s like two degrees of separation for everyone in the Korean entertainment industry, isn’t it?

I so agree with the overdone plastic look. I find it really weird to watch KJE because of it and I usually tend to avoid anything she's in no matter how good the series is because it gives me the creeps. It's too bad, since she sounds like she can act... what a waste. ps love the song. :)

Yeah well all4movies you're not the only one. When I first started to watch Lovers ( which I pretty loved in the beginning but in the end it just turned in such a melodrama that my feeling turned from love to complete hatred.) I found she had some kind of weird look. I found myself saying "yurk that's a creepy face she's making" I didn't know she had made various surgery operations... Well at least she admits it (not like she can hide it anyway...)
The info in itself doesn't really interest me because I certainly won't be watching her ( the only think that could change my mind is one of my favorite actor starring with her... I've got 2 "old" I pretty like, and 3 young (yes count Jae Hee in ) so ahem Fat chance) but... I didn't know Cain and Abel had been canceled! That's such a bad news I was looking forward to watch Jeong Ryeo Won again!!!

Are you sure about this?

I'm glad she's coming back to tv after her movie. Although I do believe she only has had her eyes done (way back in high school). Thanks for the updates

KJE always struck me as very pretty, as if she didn't need plastic surgery to begin with... i loved her in lovers in paris... i think she is one of the most talented k-actresses...
haven't seen SSH in ages... old school! i remember i used to swoon over him *_*

La Plume, I'd heard it was canceled, but it appears that it's technically just postponed indefinitely. It was supposed to have already aired but it's been pushed back numerous times already citing an unsatisfactory script and production prep. Post amended to clarify.

i feel the same vague discomfort watching kim jung eun. the plastic is too much.
whenever i look at her, i remember a comment amy brenneman, of judging amy, made about plastic surgery in an interview. she said that she'd try to avoid getting it (altogether) because as an actress, she's essentially payed to show emotion. that'll be difficult to pull off when your face is more plastic than skin cells.

Sarah (#3), actually she's known for doing lots of surgeries.. supposedly almost everything on her face was fixed- eyes, nose, chin

@ cj; no wonder why she looks so creepy...as if the only emotion she can project is "mild surprise". as for the guys coming back from the army, it kinda sounds like they have to start all over again.

It's phrases like this that remind me why I visit this site regularly - "which the actress has openly admitted (surgeries, not alien-ness)" - LMAO!

I'm looking forward to Destiny! So Ji Sup creeped me out with his Brown Bunny photos, I liked him in Misa but I was not planning on checking out Cain and Abel... Kim Jung Eun freaks me out a little too, I couldn't watch Lovers in Paris because I didn't like looking at any of the leading characters... I did try it out for an episode or two... No offence to fans though, it's just me...

KJE was beautiful in All About Eve, luminous even. Then I watched her in Lovers in Paris and I just couldn't stand her overacting. Her face had also changed so much. When I compare how she looked in AAE and LIP, I feel like wailing. KJE, WHY??? I watched the first two episodes of Lovers (the one with her Lee Seo Jin) and I couldn't continue. Yup, I've read about their fantastic chemistry and so on, but I just can't get past her act-y acting in the beginning episodes.

I didn't know she had gone under the knife, I've only seen her as she is now. Are there any pictures of her before and after look?

I wish the entertainers didn't have such a hard time after they get out of the military. I'm not of a fan of So Ji-Sub or Song Seung-Heon, but they were popular when they left and they worked hard for the recognition, I think it's only fair to be given a chance.

Thunderbolt, I also thought KJE was pretty in All About Eve, but now I can't even look at her without thinking about constipated monkeys (thanks, javabeans :) ). (See Witch Amusement Ep. 15 recap if you don't know what I'm talking about). What will her alien-ness look like in another ten years? The horror, the horror...

KJE has had plastic surgery(ies)? Well, if she's got the money then why not. Oh and I want to see Destiny too 'cuz Kwon Sang Woo oppa is there. I wonder if he's served his mandatory military service already.

haha i thought i was the only one who thought Kim Jung Eun looked strange. i mean, she is far from ugly. but her eye's... they creep me out. i watched most of lovers and most of lovers in paris. i couldn't finish either. so although she seems like a lovely person and her acting isnt bad... i find her overrated.

just because she admit that she had a surgery you guys become very judgemental. What is done on her, is eyes ,eyelid and nose other than that no more. how about those actresses that done to much overhauling you dont see those its that right. Just maybe you guys are jealous because you can't look in the mirror without flinching, whoa you guys must be uglier than i thought. dont judge other people ,you don't know what kind of personality and character they have. For me she's a very good actress and a lovely person. but whatever deragatory remarks you guys make about her it's a constructive criticism for all her fans that's why she's famous. Plastic it is normal nowadays.

it's not true that she's undergone so many plastic surgeries..only one and that is her eyes..
she is really good in acting and i like her so much..
her eyes are not creepy..
they're beautiful..
but i guess it's relative, huh?!
we have different perceptions on things..
but then again, we should not be too judgmental just because she's undergone surgery..
oh well..

btw, what's the title of this drama by jung eun?!
has it aired yet?