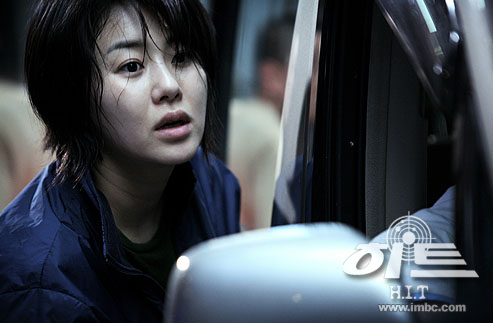 First we’ll have KBS’s upcoming Blue House-centered drama, the Chae Rim vehicle Rivals, after which SBS’s Daemool premieres. I first mentioned the manhwa-based project back when SBS was courting Lee Young Ae for the lead role, but Lee Young Ae turned it down, and they’ve finally settled on another female to headline in a casting move I’m just as pleased with — Go Hyun Jung.

I’ve loved Go Hyun Jung (HIT, What’s Up Fox?, the seminal Sandglass) for a while now. She’s one of those actors with character, in addition to being classy and talented. All that on top of being beautiful in a very natural, down-to-earth sort of way.

In Daemool, Go Hyun Jung plays the first ever Korean female president, who rose to prominence after ditching a career as a public prosecutor to help the underprivileged as a human rights lawyer; the story unfolds upon a backdrop of “love and hate, political intrigue, and feuding.” The original manhwa, it may be noted, was rated “adults only.” I expect the drama will be toned down but hopefully retain some edge.

Kwon Sang Woo has already been cast as the male lead, and the creatives behind the series include director Kim Hyung Shik (Surgeon Bong Dal Hee) and writer Yoo Dong Yoon. The manhwa was created by Park In Kwon, and the drama, produced by Lee Kim Productions (War of Money), is scheduled to broadcast after On Air ends.

Disappointed that Lee Young Ae turned down the role after SBS had chased her to play this character for years. Will she act again?

I was looking forward to a Kim Hye Soo or Kim Hee Ae (a 40 year old intelligent, independent, sexy woman seduced by a man in his prime?) Go Hyun Jung is a good choice. She brings complex, unpretentious sensitivity to her performances (didn't think HIT would work with her, but it turned out to be a brilliant casting, and the writing nicely tweaked the stereotypical sparkplug cop formula.) I'm not sure complex, unpretentious sensitivity is what you want in a superstar SBS drama.

I just finished watching HIT and Go Hyun Jung did a very good job. She portrayed a tough tomboyish cop but she also hid a very feminine soft side (shoe collection). I also saw her in What's Up Fox too, but I thought the guy was too young for her so the pairing didn't quite work for me.

I think she is a talented actress and I would like to see her get more work. I might check out Sandglass too.

I'm pleased and excited to see Go Hyun Jung in the role. Loved her in Fox.
Actually, I was secretly hoping for Kim Sun Ah to be asked and take this role. Wanted to see KSA break away from comedies but mainly to be pair up with KSW. They would be great together. But that's my own selfish fangirl dream.

Does Korea have a minimum age to be president though? Because Go Hyun Jung looks really young...

i'm happy w/ GJH & KSW. good cast, but the storyline might be too serious for me to like it. Chae Rim's drama seems more watchable.

Mm...Looks interesting. I have a feeling it'll be a bit hit, if the Director and the actors have any say in the decision to watch or not to watch.

Doesn't seem like MY type of drama though...I pretty much always watch trendy dramas....*sigh* I might give it a try though...

And hopefully KSS doesn't give us another lemon this time...yikes.

I guess you get this all the time, but I would like to express a huge thanks for your genuine humour (humor), great writing and humility about the status of your blog in the world. I guess it's what's called maturity.
My eyes just got absolutely blistered by some idiot website's grandiose statements of what it purports itself to be and couldn't even finish reading the article was so vile an absolutely a mess of nonsensical drivel. I've never appreciated the Perez Hilton-style supposed wit (nonexistent) and always thought I could sift it to get the real news and refrain from commenting, but no more.

I apologise for the inappropriate place, but again, thanks for the dose of sanity.

addicted -- Yeah, there was definitely a lot of buzz about Sun Ah maybe taking this role. I thought it came down to Hyung Jung and Sun Ah.

Jessica -- I think in the manhwa, the female candidate is supposed to be mid-to-late 30s. So, definitely older than the man hired to seduce her. My heart was really set on Lee Young Ae, because she was the perfect fit for this part. SBS had been wanting to make this drama for years as a the star vehicle for LYA.

But, Hyung Jung is also the perfect age for this role, and her A-list background (former Miss Korea and lead of seminal drama Sandglass) lends credibility to the part.

Girls we only have to sit and wait 'till this Summer... I am just hoping this Drama will be a good one (Not like BAD LOVE) ^^

I think nonbira and I are the only ones in the universe who liked Bad Love, aka "I'm Sorry I Love You, Now Leave Me Alone!" What can I say? Shot in the heart, and you're to blame, Kwon Sang Woo gives love a bad name (bad name!)

Dae Mul is SBS's event drama for this year, and it's going against MBC's own super project, East of Eden. This drama will be good, but it'll probably be "SBS good." Meaning, the production will be fantastic, but there may be a fair amount of cheese bubbling around the corners.

Can't wait until it starts airing!

if it be Ko Hyun Jung , i like her so does Kwon Sang Woo since i like them both to begin with. am going to wait for it. Lee young ae is a good actress and would probably strike the character of a first lady or lady president but i don't see her fitting the character that's both the elegant ruler and playing romantic with a younger man. Hyun jung is just right for it. can't wait for this.

I hate this news! I really hate this news... and i'm feeling so bad.
LOL! Nothing against Ms. Go (that's how i fondly call Go Hyun Jung). In fact I like her.
And that's why I hated this news... I like Ms. Go so much... and i looove Sun Ah!
I was also secretly praying hard that this project will land on Sun Ah's hands. I may not be as excited with this project for her as much as i was excited when 'Thursday's Child' was offered to her, but I'm dying for her comeback... and this seems to be a good project for her. I want to see her outside her usual funny and comedic roles.
It would have been easier for me to accept if this project landed on any other actress' hands... but Ms. Go??!!
I would definitely watch it. I know she'll do another excellent performance. And i'd end of miserably imagining Sun Ah on each scene again (just like what i did with her What's Up Fox and HIT. lol)
Seriously, I'm glad for Ms. Go. Seems like the role is so right for her. Didn't feel this way for Sun Ah in this role.
~~ waah i'm rambling nonsense again...
Ms. Go - Fighting!
Sun Ah Sshi - I miss you like crazy!

i am so happy they chose go hyun jung...they couldn't have made a better choice. lee young ae was great in sympathy for lady vengeance and kim sun ah is another favorite of mine, but the role of the president seems perfect for go hyun jung (this character is a small stretch from her sandclock role of understated refinement and spunk)...plus, she can pull off both melodrama and comedy with ease.

I'm so happyyyy!
I'm so glad that go hyun jung is being chosen for the role:)
and i can't wait to see her acting in this drama and i'm sure she'll do well in this.
I specially like her in H.I.T!

@ belleza: i actually liked bad love too.. bc of kwon sang woo ;) he should be great in this drama.. as well as go hyun jung.. she seems like a smart cookie & should be convincing as female president.. definitely looking forward to this one..
(long live bon jovi :D wasn't growing up in the 80s glorious?)

go hyun jung is a very versatile actress, and so beautiful even at 37. I love you so much! I love FOXY LADY AND SPRING DAYS!!!!! Hope Ms. Go will finally find her true love, a man who will respect her and love her for what she is, because she is a lovable person. Hope you'll visit the Philippines. I'll be the first person at the airport to welcome you!!! good luck on your career. Unnie!

go hyun jung is a very versatile actress, and so beautiful even at 37. I love you so much! I love FOXY LADY AND SPRING DAYS!!!!! Hope Ms. Go will finally find her true love, a man who will respect her and love her for what she is, because she is a lovable person. Hope you'll visit the Philippines. I’ll be the first person at the airport to welcome you!!! good luck on your career. Unnie!