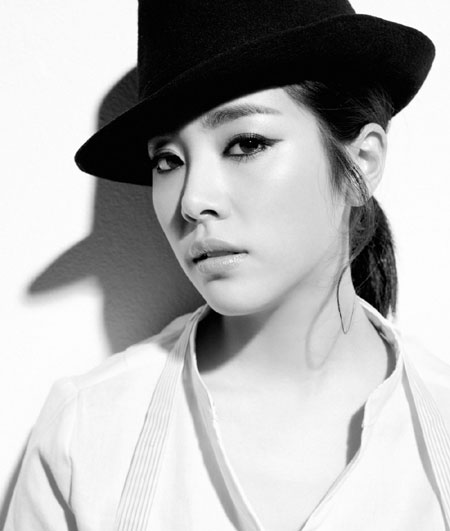 Honestly, is there a trend towards chipmunk song mixes or something? I like the melody but the frequency is not good on my ears.
Never seen Addicted, but the plot sounds interesting, hopefully the American version doesnt butcher it.

The Tale of Two Sisters remake should be good. Korea should remake Mr and Mrs Smith but call it...Mr and Mrs Kim, jopok style.

Don't forget that The Chaser, that just came out 2 seconds ago has been picked up for a remake. Hollywood seems to have a drought of talented writers (meaning they aren't willing to take a risk, except it's on someone else's dime). Oh for shame.

This is kinda off the topic but I just wanted to thank Javabeans for not only your postings but also the 'Songs of the Day'. If it wasn't for those songs, I would never know that there are so many good Korean musicians out there! I listened to Mighty Mouth (with YEH) several times again today (and I still like it alot!) and now I'm listening to Peppertones's "Superfantastic" - they're all so good! I Thanks Javabeans! You rock! :)

You're welcome, emma C! I do what I can to spread the love ;)

And it's not that Hollywood has a dearth of good writers... it's that the studio system makes it ridiculously difficult for many to make it through to production, which is why the success of indie flicks have been on the rise, some grossing amounts on par or more than even high-budget studio films (Juno, Little Miss Sunshine).

I think Hollywood would be in better shape if they didn't make such a fuss about remaking already good films (some remakes may be good, but it's not often that they're better than the original anyway) and have more faith in cultivating their own writers.

Haha, I just have to second Emma C's thanks. I recently started watching Evasive Inquiry Agency, and I swear, if it wasnt for reading your blog I would never have given it a second glance. And I'm glad I did, because its a hoot. (And I liked Lee Min Ki in Dal Ja's spring, but he is SO ADORABLE and a hudred times more squeeezable in EIA...i just wanna grab him out of the screen and put him in my pocket).

Lol, as for Hollywood...I'd make it a genre if I could. I think Hollywood is generally all about special effects and testosterone and sex and power and guns and it likes to make things go BOOOOOOOOOOOOOOOOM! Heaps and heaps and heaps of style and a great big budget. Scatter a few exceptions here and there. And you know, in the end I am ok with that, as long as I'm getting my share of the meatier stuff, which usually tends to come from somewhere else. As for remakes and adaptations, I'm always just a little wary of them, just because I feel like it may be a sign of lazyness...like you just want the money and don't want to put in the thought, originality, and creativity to make a good film. But I try to be open, because sometimes remakes (and adpations) turn out brilliantly, like White Tower.

My sister told me that "OLD BOY" was also brought by Tom Cruise!!!

John Woo to co-op with Cruise in “Xiao Ye Dao”

Since the beginning of this year, reports have abounded suggesting that Sino-South Korean movie “Xiao Ye Dao” would shoot in scenic Dali in southwestern China’s Yunnan province.

Hangzhou-based Youth Times reported on Friday that renowned Hong Kong director John Woo would direct this project with no released English name. The lead actor and actress for the project were named as Hollywood star Tom Cruise and South Korean actress Jeon Ji-hyun.

The movie is expected to begin shooting in April and last for three months.

Youth Times reported that part of the crew have prepared film settings for three months at a filming base in Dali.

The movie is adapted from the Japanese fictional animation “The Last Vampire,” set on an American air force base in Japan around 1966 during the Vietnam War.

Jeon Ji-hyun will play a Japanese female vampire named Xiao Ye who is sent by a mysterious organization to carry out a murder mission at the American air force base. (Source: VietNamNet)
so does this mean Tom Cruise is also in it? or is this just a false information?

Hmm Sam, it seems that VietNamNet is the only one reporting that (and that report is a year old, from Jan 07). Haven't found anything in either English-language or Korean news sites. But will keep an eye out.

Wow, I actually liked Addicted. It was one of the first Korean movies that I watched. I wonder if the remake could be good. The only Asian remake that I found that could measure up to its original is the Departed. I'm also curious to see what Hollywood does to My Sassy Girl.

I do agree with you about cultivating our own writers. Haha, but that won't happen. Durn it if I can stand another one of my childhood cartoons made into another movie!!!

Tom Cruise doing Old Boy would work great. Like, start with the lead character waking up in a dark, dark room. And then he realizes that this room is Level 4 of the Scientology Auditing Program . . .

Who's ready for Sympathy for Katie Holmes? It's practically biopic!

well, won't expect much then for the ADDICTED - hollywood remake, am a fan of the first seasons of buffy but i don't see sarah michelle as someone who would act out the role of the lead femme on the orig korean film.( have loved the original ... well its LBH... his my all time fave ). Am sure the current attempt will be fixated on the sexual elements of the original story. if it had been some seasoned actors from hollywood portraying in the roles i would have 2nd thoughts but not this kind of casting. hollywood didn't sit well with me with lakehouse - what with keanu (love him) and sandra bullock in it (originally they had chemistry in speed)...but its not just about the actors, its the way the hollywood remake was done ... 'just didn't do well for me to be at par with the orig .

i hope i dont sound ungrateful. i lovelovelove your entries, drama ep summaries/commentaries and the songs of the day butttt.
do you think it would be possible for you to lower the volume on your streaming stuff a weeeee bit? if not. its all good.
is it just me or are your streaming players a bit loud?
I LOVE YOUR BLOG BY THE WAY :) <3

i'm sorry, that's how the plugin works :( unfortunately it's not adjustable otherwise i'd be all over it

It bothers me that they take perfectly good Asian movies and remake them into lesser Hollywood versions. I'd prefer that they just show the movies as they are, with Asian actors and all.

Remakes are just Hollywood's way of outsourcing. Bottom line is it's probably much more lucrative for the studios to obtain the remaking rights to Asian movies than to absorb the cost of bringing an original script to the screen. I can only imagine how complicated a process it is for a film to finally be produced. And how costly it is with all the parties involved. Finally, Hollywood is feeling the pain of the thing called global economy.

thank you for that EIA info you've given.. i kept on ignoring this coz i thought it wouldnt be entertaining.. i like lee min ki a lot..

thank you very much...

as for the hollywood remakes, I agree with Jenni... i hope they'll show the Asian movie as it is.. the Lake House was not good at all...

My Sassy Girl is being remade like everywhere. (It was a fun movie anyways)

Hollywood (as well as other major film industries) has adapted other country's films for many years. Bringing an original script (or adapting a bestseller novel) is much less expensive than obtaining rights for a successful film. However horror movies are cheap to make and don't require major stars to turn a profit, thus the glut of PG-rated Asian horror fare.

I understand the moderate backlash in the Asian American community (and the sentiment is not shared by the country of original film.) but it's silly. Aside from Infernal Affairs (Monohan's adaptation was brilliant), it's not as if Hollywood is remaking great Asian cinema. Romantic comedies and horror movies, that's about it. Now if they ever get around to adapting Battle Royale . . .

I agree My Sassy Girl isn't exactly remarkable cinema, and the Chaser doesn't seem to be either, though i haven't seen that one. But Tale of Two Sisters was a brilliant psychological thriller. And Il Mare was atmospheric and surprisingly moving.

I think this is an old debate for me. When City of Angels came out, my cineaste friends were horrified how Wings of Desire was turned into yet another bathetic Meg Ryan vehicle. However, the rest of my friends LOVED the film, including . . uhh . . me. :D

Besides, Korea remaking Japanese product (hello KBS schedule of 2007!!) is a much bigger issue to the Korean Entertainment industry, and it probably deserves its own thread someday.

As an aside, I don't think Hollywood is especially good at adapting source material where magic realism and non-spooky ghosts play a major part of the story. Lake House didn't really work, and I'm wary how the Jennifer Garner version of Be With You will turn out.

Whew! Glad I'm not the only one who wasn't thrilled with My Sassy Girl.

I have little hope for the Addicted remake Possession (even with Lee Pace - and I loved Buffy, but that was mostly because of Joss Whedon's writing).

i've been wondering about this hollywood trend of remaking korean films & importing korean actors.. it's an interesting connection considering what i understand to be the general climate in the entertainment industry with regard to culture and ethnicity.. as if hollywood's stance is "let's bank off other countries' films & stars.. but people & cultures that are 'different' are still taboo here".. as evidenced by the asian actors being relegated to typically orientalized "ninja assassin" or "laundry warrior" roles.. far be it from me to let hollywood or america at large know that not every asian person they lay eyes on is a martial arts master or gangster or whatnot .. it's all a little off kilter imo.. but i guess there'll always be room to grow..