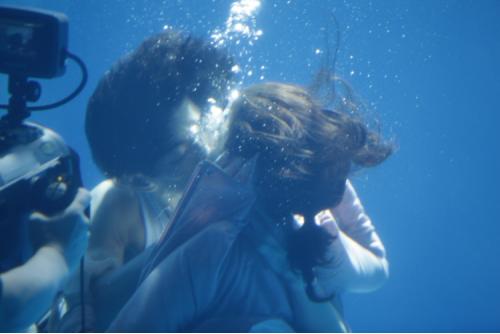 Han Chae-young mentioned an underwater kiss scene in the recent press conference for A Man Called God, and now the drama (drumming up for its premiere tomorrow with a constant stream of promotional releases and stills) has released photographs. You can barely tell in the shot above, but that’s Han with her leading man, the drama’s revenge-driven hero played by Song Il-kook.

The underwater scene was filmed at a studio in Pocheon over six hours. Han explained that she’s not a strong swimmer and worried about the scene, but thanked Song for showing careful concern for her well-being throughout the shoot. Song stated that the scene was pretty difficult; he has also suffered a myriad of injuries from various stunts he has been performing, such as being stabbed and falling from a horse.

(As an aside: Can I call for a moratorium on underwater lip-locks that are supposedly rescue maneuvers used to transfer oxygen but are merely an excuse to kiss? I mean, really. It seems like there’s one in every third drama.)

After all this noise marketing, we’ll finally be able to see for ourselves whether A Man Called God will live up to its hype as a high-budget blockbuster action series. This underwater scene will be featured in the first episode, which airs Saturday.

idk about this drama... so much flash, but will it have a good story with solid acting? ive been fond of thier past dramas... not sure about this one.

if only i could replace the girl heheheheheh.... (joke)

Not so much excited about this drama than how I was earlier, but I'm still looking forward to watching the first episode~ I always pass a drama, only to find out how interesting it is later.

Btw, how do you kiss underwater?

I mean, I can't even stay under for no more than 30 seconds. How do they even open their mouths? If you're just going to have your lips smushed hard together in hopes that you don't drown underwater by having water slip in, what's the point? And than you might die from lack of oxygen... and you can't really see if you don't like keeping your eyes open in water (which, no ones bothers to do so even on land)...

Sigh. I just find underwater kiss scenes so unromantic. If it's a rescue act, by the time it takes to exchange oxygen, you could get the woman out of the water already. Unless you want to lose oxygen yourself and have two people dying....

i don't want to speculate still i've watched an episode but....

its just not drawing me in! its probably going to have good ratings since it has Song Il-kook . and we all now how well his dramas perform...

Of course, we live in a drama world. Things should look pretty and romantic.

In reality, avoid contact with the drown as much as possible, otherwise knock them out and drag them to the surface. B/c they might drown you with them as well. That's how they teach you to those rescue courses.

Even if this thing underwater-kiss rescue works, nobody in real life uses them.

Not a romance..It's look that he try to eat her..
Just my stupid though maybe..

kissing underwater is the most unromantic thing ever. and it's dirty whatever water in there. lol. hopefully they dont drink it.

so wanna see this drama.....
hope some fansub will take up this project.

lol everything in korea these day is just flash and no substance. hype sells

can underwater kiss work...well I willing to volunteer for as many try as needed, long as the other person is Han Chae-young, ow and a bodyguard to protect me from her husband..I am delicate by nature.

Of course it works. James Bond / Pierce Brosnan did it with Michelle Yeoh, so it must work.

Yeah. Not so sure this drama attracts me either. Oh, and just as an aside: underwater "kissing" does work. Even though you breathe out a large amount of carbon dioxide than is generally present in air, our lungs aren't efficient enough to convert all of it into CO2. And you generally only do it if there is no way to get the person to the surface before they run out of air (say, they are somehow caught by a rock or something and can't get out). ...and staying and actually taking the time to kiss-kiss rather than lips-to-mouth-and-breathe would be totally counterproductive. Either work on getting to the surface with the person or go back up and get another breath of air. Um...and apparently my first post ever on this site was about buddy breathing. ^_^

Well, I will give it 3 shows to see if it's my cup of tea because of him.

James Bond is now a classic for every generation to enjoy....

Oxy only transfered when the other's nose is hold tight (they almost forget it when they film, who know, it's dramas anyway)

Thank you drambeans....Well, I for one find the cultural differences stark in how they market their drama shows and the fan-bases...don't get me started.

The agents try to [muscle in on] the poplulace to the point of being gangsta-like to me. We know about the herd mentality. The marketing strategy seems a bit over the top...because I do not see it where I come from...we protect our young people from the outside indulgences of others, and discuss what is influencing their decisions... [as red flags go up] due to possible bad influences based on their maturity level....This style of marketing will take some getting used to...if I care to get used to it all, but freedom for all and to all a good day.

Getting to know a culture beforehand is good...just sayin.

I think this is intriguing me too much. I can feel that tug increase with each article.

@kookaburra Thanks! I didn't know that and always wondered.

The thing is you breathe out carbondioxide and it increases the other person's blood acidity which then affects respiration centre in your brain. Then your brain sends the message to breathe. It's not about giving oxygen at all. Don't ask me where do I know:)

yeah it's quite a pitiful way to force a kiss..

Kissing in water...Breathe in O2 breathe out CD, breathe in CD breathe out CD....wow...when can this stop....Hope to see...excited but not so sure yet....

I was told in 5th grade (by Red Cross insructorsz0 that we do not "exhale" 100% carbon dioxide. If we do, then, why do we do mouth-to-mouth resuscitations? : )

Also, I hate underwater kisses; they're so unromantic (which reminds me of Kang Ji-Hwan and Sung Yuri's kiss in Hong Gil Dong). Hey, still remember that one???

I just saw first ep1 with this scene.. gosh Song Il kook is just Hot! And wow.. it was great scene, but super short.

I saw this episode, and from the viewer's angle, HCY's breast~tess~es are actual floating devices by themselves. It was a ridiculously tasteless angle, and a ripple of ridiculous angles to follow. Her boobs get in the way of so many good scenes.

Ah, so I really liked the first episode of this drama. So after I continued watching, I realized I REALLY LIKE THIS DRAMA!
it's good! :)

I had watched Episode 1-6 of this series, and I can assure that this is not an ordinary action-love story. So far so good! The character of Song Il Gook in this series really goes with his personally. I love him...

"A Man called God" is hot with romance, action, suspense. Song Il-gook may have lost some weight but he's just as hot & full of charm, so manly that exudes power!!
He gets to romance 3 women. The kisses are hot! Not just the touch lips...they are real hot kisses!! One of them betrays him because he fell in love with someone else. He gets shot at many times, jumps off the bridge. What next!!

The kiss underwater is not a kiss. Han Chae young is semi conscious/drowning so Song Il guk gives her some oxygen...mouth to mouth...

If you haven't been watching "A Man called God" you're missing a Kdrama of a different kind...& the on charm of Song Il guk .

as a matter of fact it's excidingly ridiculous; evenif they wanna kiss,why should it be underwater?!
also, you cant even see under water, let alone to kiss!
even considering this a mouth to mouth resciuation, it would be better unless it's uderwatter.

plz To all sigers

VOTE TO SONG : in this ling

Song il-Gook is really a great actor he never disappoints in any of is drama even with "a man called God" I really love u mr song am ur greatest fan wish u all d best in life..
...