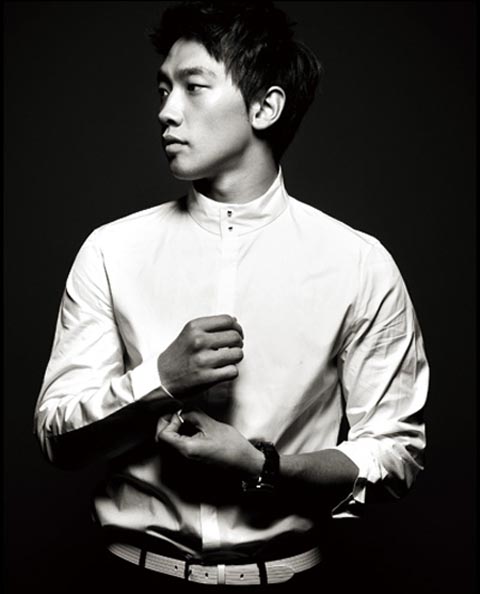 As previously teased (and teased again), Rain (Jung Ji-hoon) is coming back with a drama this year, and the news has finally been confirmed. He will be teaming with the writer and director of Chuno, PD Kwak Jung-hwan (also of Conspiracy in the Court) and writer Chun Sung-il (also of Level 7 Civil Servant).

The drama is titled Runaway [도망자] and will aim for a late-September or October premiere on KBS. However, PD Kwak was rather vague on the details, saying, “We haven’t decided whether it will be 16 episodes or 20, and it could be a spy melodrama but we may change it. I can’t reveal the details of the plot.” Based on previous interviews, it seems that this will be a contemporary project rather than sageuk.

This will be Rain’s first drama in five years, since KBS’s A Love To Kill in 2005. Since then, he’s acted in Park Chan-wook’s quirky psych-ward romance I’m A Cyborg, But It’s Okay, the live-action Speed Racer film, and the blood-n-gore action film Ninja Assassin.

I’m… approaching with caution, but the potential is there for a good drama. Kwak has quite the cinematographic flair and a stylish sensibility, while Chun has penned two blockbuster hits. And while Rain is still pegged with that “idol-turned-actor” label, he’s generally given props for being the successful kind.

So excited. Love him in Full House and hope to see him in another drama. Count me in too!

Cool! Welcome back to dramaland Rain-shi.

I love all the non-answers:

It can be 16 or 20 eps. It could be a spy melodrama or not. It could star Rain with or without his shirt off. It may or may not involve lots of eye-sexing. And so on and so forth. Heh, this will be a neat project to watch take shape.

Looking forward to this. Will he get summoned for military duty though like LJK?

I like him much more as an actor than a singer (his dancer is off the chart though) so I'm excited.

I love rain, I`m excited with his drama.
many good drama this year, I`m so happy!

Ps . no LDH this time please .

Yes, LDH and her boss, why not. PD Kwak also very fond of her..

@16 your're right on this one. Rain will make money casting LDH , and PD Kwak has said in interviews that he likes working with her.

to cast Lee Da Hae as the female lead would be great. Definetly watch this series if she was the lead. keeping my fingers cross.

now i can't wait until October rolls around!

i want jeon ji hyun to the lead actress. i thing she have chemistry with rain.

Rain's hot, very nice to look at. i like him as a singer, but i don't care for him as an actor. something about his acting just doesn't click for me. i'm not even sure what it is.. cuz i really do want to like him, i just don't. *shrugs shoulders* oh well. i will prolly still watch this drama down the road just because he's in it.. and he's hot.

RE: Female Lead
It'll be so convenient to cast LDH as his female lead.
1) She's under his management company so that's like double pay.
2) LDH is a super crazy Rain fangirl and there's a clip to prove it! ;P
3.) LDH has worked with both the PD and the writer. The PD already said he'd like to work with her again and the writer can make up for underwriting her character in Chuno, as some would say. :D

HAHA! Well as for me, I'm two sides to this. I'm excited for Rain and PD Kwak but for CSI not as much as I am with the other two. I'd really die for a LDH-Rain team up (or as we have nicknamed them over at our land "Bihae"). I'd also love for LDH to work with PD Kwak again because he's such a master at his craft and he brings out the best in his actors.

But, on the other hand, I have my qualms about CSI for underwriting some characters (especially the females) and leaving them half-baked. Also, he does have the tendency to leave loop holes around the plot like craters in the moon. But, I do think there were some glorious moments in Chuno so there's that.

As for other female leads, I know she's busy and all but HJW! haha they had sizzling chemistry in Rain's MV that I'd be totally on board if she is. Okay, I can't think of anyone else. :D

as for feamle leads....since we don't know much about the venture (thanks for all the non-answers, PD! LOL), i don't know who would be best suited for the role...but i do currently love Lee Min Jung ^_^

hmm can see him taking his shirt off five minutes into the first episode..end of story instant hit as thousand of fan girls get nose bleeds!
Lol no i always though Rain has it in him to be a good actor..sadly roles like Speed Racer and Ninja Assassin did nothing to make him a better one, though i am sure did his bank balance a lot of good. he suffers like his contemporary and former good friend Jang Nara in going the multi-talents path, there just not enough time to both act regularly enough to keep improving ones acting and keep a singing career going.

I hope it's a good drama and YAY looking forward to RAIN on KBSWorld! Pali pali!

i am so happy to hear about him that he will able to enter his incoming drama on Sept or Oct later --- YESSS! ^________^ I can't wait to see him in his new drama so finally --- I will be patient with my precious hear TILL fall -- it's NO matter what! (evil laughs)

no matter how good the drama will be, it's imposible to be as good as 'a love to kill'.
rain's performance in that drama is oscar worthy

but am very excited for another drama from him!

I love Rain! But I'm glad that it probably won't be a sageuk! I'm not a big fan of sageuks. But I wish it wasn't a spy drama either...
But even if it's a sageuk+spy drama, I'll for sure end up watching it because of Rain!

I hope they can get a good actress to star alongside him, one picked based on talent not looks! haha I am a dreamer huh?

Anyhow, I love Rain as an actor and I cant wait to see what this turns out to be!

Chuno was such a good drama. Kim Ji Suk will always hold a special place in my heart after that drama!
Rain... I'm not sure of what to think quite yet.
Don't get me wrong. I'm definitely not an anti-fan and Full House was undoubtedly one of the most adorable dramas I've ever seen but if this drama has a lot of things in common with Chuno, they will be compared. And there's no way his performance will ever match up to Jang Hyuk's. I can actually say that with confidence.
I never saw Ninja Assassin so I'm honestly not up-to-date with where he is with acting but I try out all dramas (except for sitcoms and daily dramas) so I'll definitely give this a shot too!

LEE DA HAE WILL BE GREAT TO BE HIS FEMALE LEAD.

I'm sorta excited. Loved Bi in Sangdoo and def. Full House but not so much in A Love to Kill. Speed Racer was okay...and i haven't even seen ninja assassin .

And am I the only one here that's hoping that Song Hye Kyo is the female lead? *crickets* It's probably never gonna happen but a girl can hope =D

Leedahae acting stiff , please for heaven sake not Songhaegyo far too short + both not sexy enuf for Rain taste to kiss passionately like Love to Kill not Fullhouse.
Bestest chemistry gotta be Leehori else Kimtaehee, Kimsuna or Shiminah again.

@8 ockoala, fat chance he can keep his shirt on. Look at Chuno. Or IRIS. I'm drooling already. But a little sad, because I was praying for him to play opposite Kim Sunah in I am Legend.

i can imagine him exhibiting all that muscles in the drama already. LOLZ.

actually u know wht even though im not a rain fan ( hears fangirls/boys scream and berate self.....) i'd like to see him in a sageuk....just because i know i cant imagine him in one and would like to see jus for the heck of it ( .....crawls under a stone )

no i won't LDH hihi

I'm rooting for either LDH or SHK as female lead. I prefer the former though.

Oh my. MBLAQ's BIG PAPA is gonna back on screen again. I don't care with whoever the female lead would be for him. I'm so hyped. Please make it this happen soonish PD-nim!

Why are people wanting Lee Dae Hee? I saw her in CHUNO and unfortunately, her impact was lacking. Blame it on the writers for not giving her character more substantial importance but I honestly wouldn't want her paired up with Bi Rain just yet.

Is there another actress we can think of? Han Ye Seul or Ha Ji Won are actresses from his music video but I'm not sure if that will work out considering... I would love to see Bi Rain & SUNG YURI!

Knowing how close Bi Rain is with Hyori, I can imagine that he's also friends with other FinkL members including Sung Yuri so why not?! I think they would make a great looking pair and plus, they're both idols turning into actors. It's almost perfect! Plus, she's a good actress, too, who has potential to become an even better actress if given the chance and with the right role. She also always reminded me of one of my favorite actress, Son Ye Jin--there's a resemblance between the two! :D

SUNG YURI is one of the worst actress before Hong Gil Dong, then falls flat again on other drama and movie-on her latest drama, she also got lots of flaks for her acting, so not a good choice for female lead. PD Kwak is one of the directors who knows what talents are.
This is melodrama, not many actresses capable of giving some depth on the heavy characters. Well, sadly most people thought who can act cute, scream a lots, pouting a lots is considered a best actress. sighhh

Sung Yuri labeled one of the worst actress? I beg to differ. There are other actress who are far much worst and you can tell when the script is passable yet they just act so badly. In Sung Yuri's case, I think for the most part, she has chosen the wrong roles for her that isn't as challenging or give her much room to grow from which is very unfortunate because I do see potential in her.

Honestly speaking, I've never been a fan of her Korean dramas--I've seen Thousand Years of Love (total failure), One Fine Day (failure), Snow Queen (another failure), and Hong Gil Dong (didn't like the pairing), and I have yet to see Swallow the Sun.

Like I said, with the right role and if she continues to challenge herself as an actress, I truly believe she can become a better actress! This role with Bi Rain could be one to give her that... :) I'm still crossing my fingers! :D