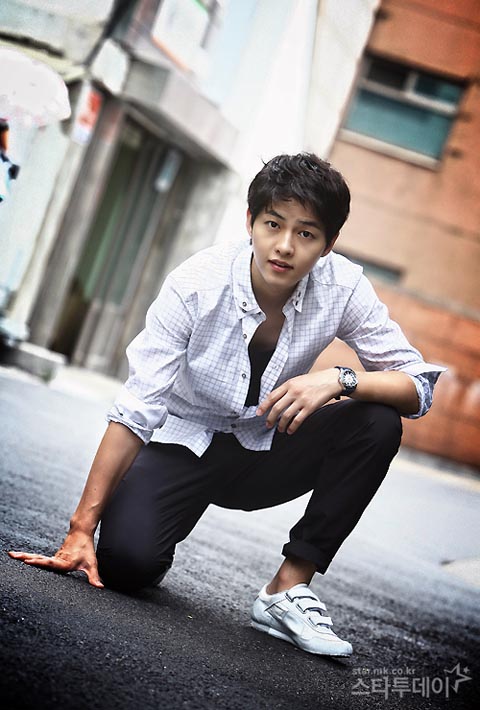 According to Song’s management, Sidus HQ, he will play a bright and cheerful marathon runner in the “bright sports youth drama.” His character Dae-gu was born in 1988, the year Seoul hosted the Olympic Games, and had to give up sports because of a painful past. However, he discovers a passion for running and begins running marathons. The title represents the spirit of young people “who face the harsh world wearing only a running shirt and throw one’s body full-speed ahead.”

Song Joong-ki said, “As soon as I started the script, I read it all in one sitting without stopping. It was that fun and touching. I felt really moved at Dae-gu as he heads toward his dream of running marathons, and the loyalty and passion of those around him.”

The special drama will begin filming in early April and will air on MBC in June.

Omg. he's so cute <3 cannot wait for this

I like him, he actually was the first male I like from Obgyn (long before Dr.wang). hope him to do well in this drama.

lol. LOL. did anyone catch him on strong heart saying how he got yelled at during frozen flower filming because he runs kinda funny due to years of short track? xD hopefully he fixed that habit if he's gonna be running during the entire drama :P

anything with Song Joong-ki in it will have me watching it!
so psyched for this!
after watching him in OB-GYN (and previously Triple), i finally saw the twinkle in this
adorable young man, he is a good actor!

@yen_nguyen
I second that! It was SJK as the obnoxious but totally droolworthy Dr Ahn first before I fell for Dr (sexy) Wang (and somewhat Dr Lee too).

Will definitely check this short drama out, for my him. xD

You share the most interesting words....droolworthy! I learn something new everyday!

I love him! He's beyond adorable!

awww...cnt wait..i lov.ehim!! ..thank go.d its only4 eps.. cus i have way too many long dramas lined up to watch

Ditto! He makes me want to pull his face in, and let's rub noses together.

Good luck to him and his successes.

another cute actor , as Dr Wang actor , they are both cute .

He's as adorable as Jang Geun-seok and Kim Bum, but without Geukie's smirk or Bummie's wink wink self-awareness.

First speed skating and now sprinting, too bad he couldn't have been the lead in HTTG, SJK playing soccer, I'd watch that!

Definitely gonna watch this! Can't wait to see him as a lead :DD

i love him since my precious child...he's so cute

OMG! He was good in OB/GYN! I'm excited for this one
Hope this is Song Joong Ki's year! He's adorable and an actor with potential!

I can't but linger when I see news about him or a picture him...he is ADORABLE! I'm still surprise he's around the same age as me because he looks so young. I think I might just this out this special drama just for SJK!

liked him since Precious Child,WISFC,&Triple...he's such a promising actor & cute to boot!!!

yaaay!! he's getting more and more recognized :P
looking forward for his new projects!!! LOVE his character in OB/GYN, and yess.. along with dr. Wang :P

Yay! Great news! SJK has become my actor to watch out for since watching him in Triple. and yeah, I'm lining him up also along with my fave hot young actors JKS and Kim Bum. Fighting SJK!!