Kim Kang-woo to marry next month 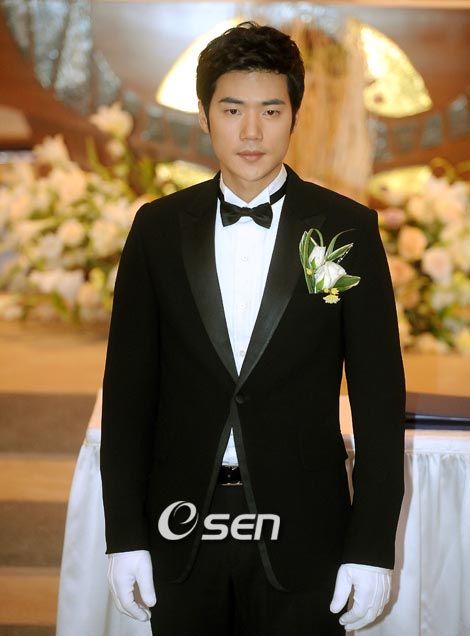 Actor Kim Kang-woo has announced that he will be marrying his longtime girlfriend next month. The woman in question is Han Mu-young, who happens to be the older sister to actress Han Hye-jin (Jejoongwon). The two were introduced by friends in 2003 and have been dating for the past seven years.

A rep from Kim’s management, Namoo Actors, explained that the couple has set their date and location, but the ceremony will be closed to the media. The wedding will take place on June 18; however, the couple has not yet decided who will preside over the ceremony or their honeymoon location.

Kim Kang-woo came to mainstream attention through the 2003 drama I Run, which he followed with movies like Le Grand Chef and Marine Boy. His last drama was last year’s Story of a Man, where he was riveting as a cool psychopath who slowly unraveled at the seams. (Seriously? Watch it.) He played Moon So-ri‘s boyfriend in the recent movie Ha Ha Ha, which just won the top Un Certain Regard prize at this year’s Cannes Film Festival.

Next up: Kim acts with Song Seung-heon, Joo Jin-mo, and Jo Han-seon in the upcoming noir film Invincible (the A Better Tomorrow remake).

Congrats to him!!! i admit he's not typically my style but his role as a total psycho in the slingshot was totally HOT, creepy but still HOT.
anyways, hope they'll have a happy marriage!
and thanks for the news!

Congrats! I am so happy for him and jealous of his girlfriend. I wonder if Han Hye Jin and her look alike.

this is so soon!
i wish him congratulations!

OMG. this is so exciting and at the same time, so sad! oooh i am so jealous!!!! this is like the year for all the hot bachelors to marry! i don't know if my heart can take all this...and it's only MAY!!! ^_^ hahahah

wow. he looks so much like kwon sang woo. but congrats to him and her!!!

Woohoo! The hot psychopath is getting married! Happy for him :-)

WOW! He is getting marry? I love Story of a Man...

OMG i still cant forget how gd he was in "story of a man" awesome potrayal!

congrats to him on the wedding too! hes soooo handsome!

OK, I'm just so completely elated to hear Jo Han Sun! Joo Jin Mo! Eun-sung-aaah and Kim Kang Woo are to star in a HK film remake together, that's far, far too much awesome to pack into one film for it to be a good thing, right?

Anyway, congrats to KKW, I'm sure as HHJ's she has to be just as beautiful.

Yeah, yeah, yeah, I'm not happy with this news. He's one of the hottest Korean actors out there...guess I'll have to hide him away in my dream file.

For curiosity's sake, here's a photo of the sisters (I think):

Good for them! i am going to watch a man's story soon too

Wasn't KKW suppose to be in Dong Yi? What happened?

I don't know if it's because it seems to be the trend lately, but my first thought was, "She must be pregnant."

If she's not, I will be very surprised.

Damn another one off the market.

Wow, seven years. That's dedication. It's so good to see celebrities being able to marry the person they love, even if they have to sacrifice a normal life. Now I want to see what this girl looks like.

congrats and i m very happy for him and his bride.

he is going to make one hot groom! anyways, congratulations!

Omo - Kim Kang Woo - you just broke my heart! Hehehe...love him and thought he was great in Story of A Man aka Slingshot.

Hawtness! And he has some steamy scenes in Marine Boy with Park Shi Yeon - wooots!

Wish him and his future wife lots of happiness and love and cute babies!

At least for him, this was a proper engagement and not a shotgun wedding! Congrats!!

Talking about Invincible, do we know who is playing what from A Better
Tomorrow, eg SSH = Chow Yun Fat, JJM = Tik Long, JHS = Leslie Cheung??

aww...congrats to kim kang woo and bride-to-be!!
his bride-to-be is really beautiful and look like Han hye jin

WATCH OUT, HAN MU YOUNG!!! BE CAREFUL WITH HIM BECAUSE HE IS SUCH
AS......EVIL PSYCHO ---Because of acting like that in "Story Of A Man", ooo!

Oh, JUST KIIIIDDDDDINNNNGGG!!!!!!!!!! =) =) I know he is really doing so awesome job at his acting like that because I LOVE that BESSSTT action drama "Story of a Man", of course!

I am ssooo happy that my best evil actor Kim Kang Woo will be married with his long girlfriend next month -- CONGRATULATIONS!!!

I am Zotung Khamh. I am very glad to hear your news that you will be married.
Congratulation..