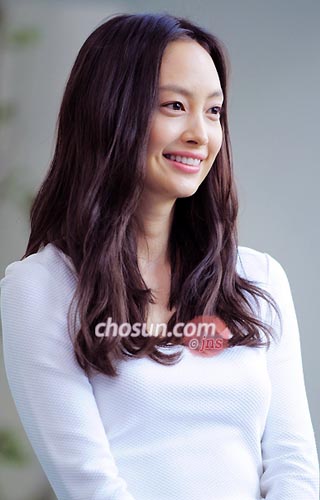 As soon as Rain confirmed his drama comeback in Runaway (the next project from Chuno‘s writer-director team), speculation arose about who would be cast as his leading lady, and Jeon Ji-hyun‘s name rose to the top of lists as a likely prospect. However, a source with her management company, Sidus HQ, has now stated that Jeon has declined the offer.

Now Lee Na-young‘s name is being discussed as a top possibility, which was confirmed by her management, BOF, who stated on June 3 that although no decision has been made, they are looking favorably at the prospect. If she accepts, this would be Lee’s second time working with writer Chun Sung-il; Chun is the head of Harimao Pictures, which produced her recent film Dad Likes Women, a heartwarming family comedy in which she played a transgender character. (The character fathered a child while a man, but doesn’t know of the child’s existence until he comes knocking on her door, only to find that Dad is now a woman.) It would also be her first television drama role since Ireland in 2004, which she did after making a splash in the huge mania hit Ruler of Your Own World in 2002.

Runaway is planned for a late-September or early-October broadcast, which means that producers are in a hurry to lock down casting and begin filming soon.

oooh...Rain and Lee Na-young....i would never have thought to put the two together, but i think it would work! i think they are both terrific actors and it would be very nice to see them both back on the small screen too!

the suggested lead actress to play opposite lead actor Rain could be Lee Da Hae. That would be nice to watch.

yea, i heard that it is going to be lee da hae too

ahahaa! when i saw that jeon ji hyun turned down the role i just laughed. too funny. i wonder why...

as much as i love lee da hae - she won't pull a "kim tae hee" on us would she? (and i mean, kim tae hee's performance in IRIS)

awww...that sux...i really wanted to see jeon ji hyun make a drama comeback....bt i like lee na young so i guess its fine

Yes please!! Lee Na Young is my favorite k-actress so I really hope this is true! I've been waiting for her to do a k-drama for years. I hope I won't be disappointed like I was when she was supposed to be in Personal Taste and SYJ was chosen instead. Then again, I didn't end up liking Personal Taste so I guess that was better for me.

Lee Da Hae sounds like a good choice too but I'd rather see LNY make her TV comeback. :::crosses fingers:::

I also like Lee Da Hae to be opposite Rain. At least now we can say she can act and finish a drama series. I liked her in Chuno.

I don't get why people want Lee Dae Hee to play opposite Rain. I don't mind her but her performance isn't exactly memorable especially in Chuno. Her impact was lacking but mainly due to the writing.

Too bad that Jeon Ji Hyun turned down this offer. I would've loved to see her play opposite Bi Rain but now since 'Personal Taste' just finished, I really hope they consider Son Ye Jin! I admire her and it would be great so see her with Bi Rain! :D

As for Lee Na Young, I have nothing against her but I'm not too excited about her pairing up with Bi Rain. Didn't she work in a few CFs with Bi Rain previously? I may have seen a few...

If Lee Na-young gets casted, I'm totally watching it!

Na-young was absolutely brilliant in Someone Special.

I LOVE LOVE LOVE Ms Lee Na-Young so this is fantastic if it works out. I am not a fan of Rain but I have always appreciated his hard work and dedication. He's a pretty good actor. I prefer his acting to his singing and dancing which honestly makes me cringe.

Is it just me or does Lee Na Young remind you of ShinAe?

now THIS i can get aboard. i love lee na young.

I like Lee Na-young but I don't know about her with Rain?? I trust this writer-director duo though, so I will be watching no matter what.

Why LDH? well Chuno is not her first drama, she is not a new actress.There are SPECULATION in Chinese media, she and Rain will be doing another drama, a joint venture btw China and Korea, since both are so popular in China right now.
http://cfensi.dramaddicts.com/forum/blog.php/2010/06/04/huayi-brothers-ft-ihq-when-rain-lee-dahae-jang-keunsuk-kim-taehee-and-song-seungheon-come-to-china/

But, I don't want her to be in this drama, I prefer her in the remake of Tian Mi Mi with PYH-that's the role she's suppose to be, not as male escort all the time.

Btw, I like this pairing LNY and Rain, she is a good actress but underrated, if writing is good, she can propel her status as hallyu star, this is her chance.

what is jeon ji hyun doing nowadays? it feels like she's turning everything down. she's becoming irrelevant soon it feels :\

Uggh.. Not another HKTTR star -_-.. I wish it were Han Ye Seul! She'd have great chemistry with Rain!

I'm just so happy it's not Jeon Ji-hyun anymore. No offence to her fans, but I just don't think she's that talented of an actress.

I prefer Lee Na-young more than Jeon Ji-hyun! I think that it would be fantastic to see her and Rain working together!

Bi+Lee Na Young together in a series would totally rock my world!

Firstly, the girl act actually act. Secondly, the 2 were too cute in their NATE CFs together, so some chemistry is guaranteed ;))

My fingers & toes are crossed!!

I would like to see JJH finally get around to doing a drama, but LNY would be a fine choice.

Granted, I haven't seen LDH in a lot of stuff, but based on what I've seen JJH is the better actress (not to mention having more of a screen presence).

This could be really good! Cant wait!!!