It’s a familiar pairing, but the preview clip (watch below) has a refreshing tone and the drama is peppered with little manhwa-like touches, adding drawings and squiggles into the frames to create a comic-book feel.

The two characters first meet at a wedding reception, and she is soon thereafter transferred to his broadcast station, where they meet again. They clash in a love-hate relationship, and eventually fall in love.

The purpose of Drama Special (like Drama City and Best Theater before it) is to highlight promising new talent, both in front of and behind the cameras. However, these initial episodes have brought in established names to help kick off the series, starting with star writer Noh Hee-kyung‘s Red Candy starring Park Shi-yeon in the first episode which aired a month ago. Our Slightly Risque Relationship is directed by Kim Hyung-seok, who did Love & Marriage (which also had a touch of the manhwa art, though mostly contained to brief interstitial frames).

Our Slightly Risque Relationship will air on June 5.

(LOL at the brief reference to the, um, less-than-impressive size of his manhood! They argue about money, as she is apparently on the hook for his hospital bill, and when he won’t give in she calls him “stingy.” Only, that word — especially paired with the way she points down at his pants — takes on an additional meaning, which the eavesdropping co-workers are fully aware of.) 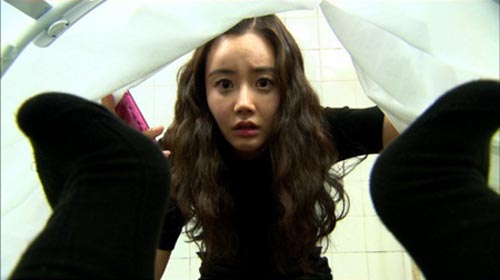 i hope somebody will sub this...

Wow, the combo of the title and the first picture had my mind going straight to the gutter

It seems to follow Coffee House's format in some way... niiiccceee! Lovin' about the manhood tease. I know so many guys whom are insecure about that, even after they marry. LOL!

i so want to see this.. kekekeke

just the pictures made me LOL.

Ha ha ha--that last photograph reminds me of the episode in Pasta, when Chef (played by Lee Seon Kyun) and Yu Kyung (Gong Hyo Jin) shared a similar scene by the dock at night. I could swear he was wearing the same outfit, too!

And it's great to see Lee Seon Kyun coming out in shows like these--I remember watching him before he became famous, in similar types of shows.

Oh My God this looks awesome!!!! I hope someone will subtitle this cuz it look s like comedic gold ^______^

cant imagine the girl see his birdie in a situation like that.... and im going to watch it because the guy (Lee Seon-kyun).... is the guy that i love most in "Pasta Chef"....

So Chep, I mean LSK, can no longer speak without shouting??? Don't get me wrong, I love the guy since Coffee Prince,but my ears are quite sensitve...come to think of it,he shouted in CP,too...hmmm

It looks like Pasta if the main lady didn't dote on him so much. Booooooooooo

I love Lee Seon-kyun. Loved him in Pasta Chef, in Coffee Prince and now this. I also LOVE his screaming, it just shows his excitable temper and I just LOVE it!

He looks almost 90% like 1 of my friend. Recall memories:)

i really wanna see it, does anyone noe where i can watch this at?:)