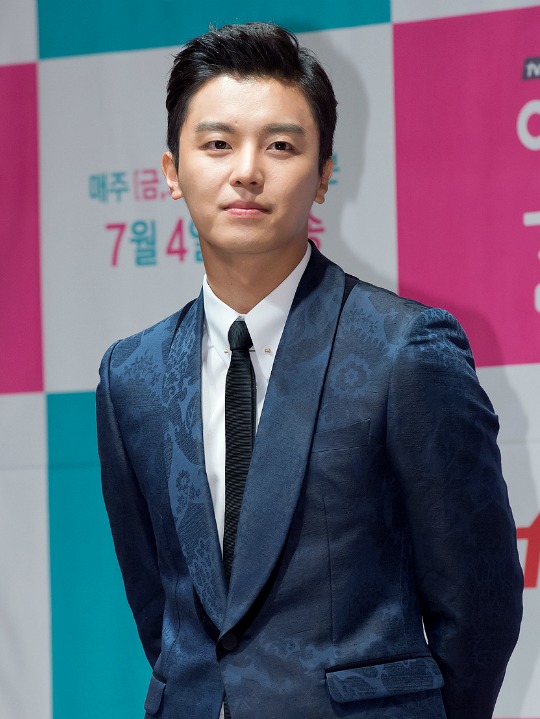 I’m a little sad if this means that Yoon Doo-joon (Let’s Eat) is out of the running for a drama comeback in the immediate future, but on the other hand, how could I possibly complain about a reunion between Yeon Woo-jin (Divorce Lawyer in Love) and the Marriage Not Dating creative team? Yoon Doo-joon was given an initial offer to star in tvN’s new romantic-comedy drama Introverted Boss, but he passed on the role and the offer has gone to Yeon Woo-jin; now there’s a very good chance that Marriage Not Dating’s lead actor, PD Song Hyun-wook, and writer Joo Hwa-mi will be reuniting on their next project.

Yeon Woo-jin is reportedly considering favorably and in negotiations to star, so while he’s not confirmed, it sounds likely that he’ll sign on. The new series is about an extremely introverted man who’s successful in the PR business, but veiled in mystery because he hates to have any attention drawn to himself. He’s often misunderstood by others because he avoids eye contact and seems aloof, but all of his arrogance and mystery is actually a carefully crafted image that he hides behind because he doesn’t want to be around people.

He’s described as extremely sensitive and shy, and despite hiding out in his room most of the time, he’s managed to become “the silent monster” of the PR industry. But by hiding in his room, he loses everything, and he begins to dream of a life out in the world. The drama is about his personal growth as he slowly emerges from his shell. And of course because dramaland can’t be without its diametric opposites, he’ll have a romance with an outgoing heroine. It’s basically Flower Boy Next Door with Park Shin-hye and Yoon Shi-yoon swapped around, but I really enjoyed that setup, so I’m game for more.

It’s nice to anticipate a drama from a trusted team, because I remember Marriage Not Dating with particular fondness, and Yeon Woo-jin was absolutely hilarious in that role. It’ll be really fun to watch him take on a sensitive character who’s all talk, and I can’t wait to see who gets cast as his love interest. I can already imagine how crazy she’s going to drive him, muahaha.

Via IS Plus, My Daily, Osen

2 matcha and the beer

Yes!! I love him subtle acting in Arang and perfect comedic timing in Marriage not Dating! Too bad, I dropped his last drama, Divorce Lawyer in Love, despite my fondness to him, Jo Yeo-Jeong and Shim Hyung-Tak. Hopefully this project will be as good as MnD.

As someone who watched Divorce Lawyer in Love all the way through; don't worry about it lol.

it's sad that Han Groo isn't available due to her pregnancy..

but I really hope we'll get a good match for Woo Jin..

Oh wow, she's pregnant? Congrats to her! But I do miss her, so I hope that she'll eventually make her comeback. She's quite charming and really talented as a young actress, so I'd hate to see her go.

I read your second sentence and automatically, I picture his mother tilting her head as she says "Jang Mi?"

I love Marriage not Dating!

I still say that line, "Jang Miiii???" Her delivery was everything. Comedy gold.

Ok, I like this! I loved Yeon Woo-jin in Marriage, Not Dating and I can totally see him in this role.

Yes, either Do Joon or Woo Jin will be perfect for this role.

And now lets start the line of possible female lead who is free and available now If our hero is the introvert, means the heroine could possibly be extrovert?

My list : Nam Ji-hyun, Kim Seul Gi or if they want some idol, Eun Ji or maybe Min Ah can be good choice? ;)

I am sad yoon do joon didn't accept this and I have not watched marriage not dating either. So, I don't know what to expect. But, I have seen only positive comments about that drama, so I am going tol check this one out.

You should try Marriage Not Dating. I was quite sceptical at first, but this drama is entertaining. Romcom is not my favourite genre, but good romcom will at least made us happy and give us good laugh.

Yes! It was definitely a fabulous rom-com! It was fun and smart with a lot of heart! ?????

Yes! I was super sceptical about Marriage Not Dating at first too, but I ended up loving it! Plus the sound track is cool. Love lane..

Yay! Please let this be as good as Marriage Not Dating and Another Oh Hae Young. Plus both these dramas were under PD Song Hyun-wook so are we to expect steamy, proper adult kisses???

Awwww Yoon Do-joon. What a bummer.

That said, the lead girl must still be Kim Seul-gi. All the way. I wanna see my girl be the lead now, dramaland. Come on, chop chop. This has been a long time coming.

Wow. He declined the lead roles of Drinking Solo. I don't know that.

Because of the contract issues with his company, I doubt we will see Dujun acting any time soon. :(

No, not this again! It's sickening that actors can't do their jobs because of money grubbing companies.

Can't wait until they get away from Cube. ?

Argh this is frustrating. T_T So many of us were excited to possibly see Doojoon in a new drama. I wish the contract issue would be resolved quickly!!! :(

This is what I thought too :((

Yay! It feels like he's been gone from dramaland for far too long. Even though I guess it hasn't been that long in reality. I know everyone seems to throw her name out when a new drama is announced, but Kim Seul Gi really would be the perfect extrovert to oppose him.

(Though I would be sad that we almost had a SSL reunion again).

One of my favorite actors. Booked!

He really handsome in that pics

I have a soft spot for Yeon Woo-jin. I hope he takes it.

If he takes it, just hope for a good partner???

Awww, yay. I was just thinking about how much I missed him. I really liked Yoon Doo-joon's casting, but this reunion with Yeon Woo-jin is just as awesome! I have a feeling if MND had aired on TVn around now, it would have gotten high ratings. Here's to hoping he can have a big success with this one!

I didn't know I missed him on the screen until I saw his cameo. Am glad it's him a d further more reuniting with the production team. But whose his leading lady?

Please lead him to accept this role, to grace my small screen, and to cure my longing after so long I've been deprived to see him. I promise I'll be a better person than i was yesterday. Amen.

Pleaase make this happen!!! If it happens I'm already feeling it becoming a favorite drama in the making!

Oh my gosh! I totally love him so I want him to accept accept accept! I've been watching him consistently since he maknae oppa'd his way into my heart. :D

Yeeeeeey,hope he accepts the offer!

I'm down if he's up to star in this! This PD team and him is a great combo!

I hope he stars in this drama. He's so good at taking the even most basic characters to the next level.