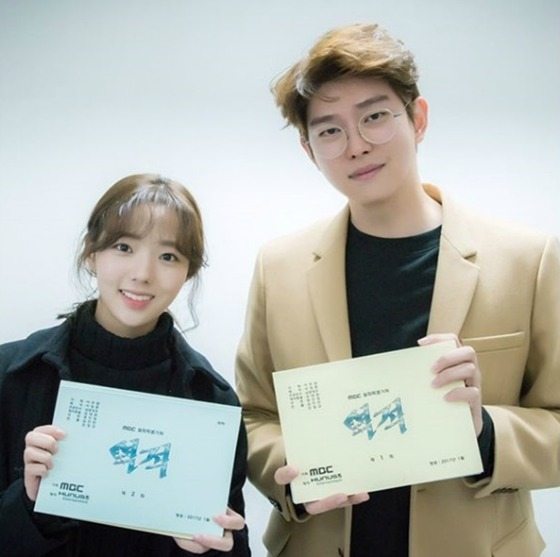 Cast and crew gathered for the first table read for MBC’s upcoming Monday-Tuesday fusion sageuk formerly known as Rebel Hong Gil-dong, which has a new name: Rebel: Thief Who Stole the People. Written by Hwang Jin-young (King’s Daughter Soo Baek-hyang) and directed by Kim Jin-man (Kill Me, Heal Me), Rebel is a retelling of the classic tale of Hong Gil-dong, aka Korea’s Robin Hood, who despite his brilliance, had no legal standing in society due to his illegitimate birth as the son of a nobleman and his concubine. He stole from the rich and gave to the poor and later became king of his own realm.

This drama is set during the reign of tyrannical King Yeonsangun of Joseon. Yoon Kyun-sang (Doctors) takes on the role of Hong Gil-dong and will play the leader of a band of smugglers who eventually becomes a revolutionary emblem of the people, fighting for their rights in a world of haves and have-nots. Chae Soo-bin (Moonlight Drawn By Clouds) is the female lead and plays a vengeful young widow rescued by Hong Gil-dong who dreams of killing the king for the loss of her husband. 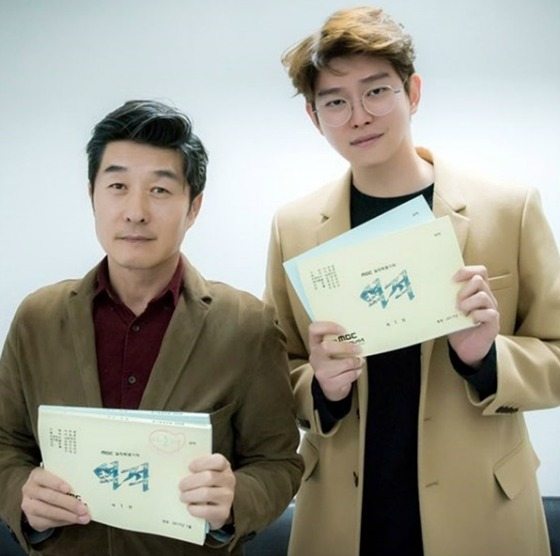 At the table read, PD Kim Jin-man stated that he wanted to tell this story in a fresh and upbeat manner and not in a tone that’s heavy or melancholy. Actors Park Joon-kyu (Hwajung) and Lee Joon-hyuk (Moonlight Drawn By Clouds) reportedly filled the room with laughter as the comedic relief duo, and Shin Eun-jung (Working Mom, Parenting Daddy), Kim Byung-ok (Sound of the Heart), Sohn Jong-hak (Person Who Gives Happiness), and Seo Yi-sook (First Love Again) were also in attendance.

I’m interested in seeing how they change up the classic folktale hero, and the idea of Chae Soo-bin playing a character bent on revenge already excites me since I loved/loathed her as the volatile bully in Sassy Go Go.

Rebel: Thief Who Stole the People is expected to be a 30-episode series and will premiere in early 2017 after Monday-Tuesday drama Night Light ends its run.

I really like Chae Soo-bin. So excited to see that she is getting lead roles!

Same here - I really hope this is successful, so she keeps getting them!

Not a fan of the title change.

What a great supporting cast though! Is this YKS's first leading role?

Yes, it is! Csb and Yks have already filmed a cf and a mv prior to this project. They've already show great chemistry so excited that they're reuniting again. Csb has also worked with both Kjs and Lhn.

is there a link?

@Shader they definitely have good chemistry. I love how he looks when he hugs her in the mv, they really feel like bf-gf.

They have fantastic chemistry, that commercial is really more like a mini-drama. It'll be interesting to see what they'll be like in the actual drama and in sageuk mode (please be good, PLEASE!)

Hmm... I am not sure if i want to watch it or pass, i have a mixed emotions about this. The story is not that gripping.

Let's wait and see the trailers.

yeah, I was just about to comment this, that title confuse me lol

I really like the people they casted for this :) I am getting excited. ^^

My only worry is because it's 30 episodes, they will end up taking at least 15-16 episodes before they kiss ?

While waiting, can go watch him giving lots of kisses in 3MAD. To pretty cats tho, not Soo-bin ^_^
All the image I have about Yoon Kyun-sang nowadays is him nodding and saying it's delicious, it's delicious after a spoonful of Eric'c cooking...

omg im waiting for the kiss scenes too lol

Not terribly excited by the new title..
What does Rebel: The Thief Who Stole The People even mean? And why Korean dramas nowadays love colon punctuation?

aww excited for these two as leads. He will get the girl - fianlly.
Hope the story suprises us and hope their characters are layered with charm, story and intensity..

Yoon Kyun-Sang is such a screen brightener.

'Chae Soo-bin (Moonlight Drawn By Clouds) is the female lead and plays a vengeful young widower rescued by Hong Gil-dong who dreams of killing the king for the loss of her husband.'

Hate to be 'that guy', but she would technically be a widow. A man who outlives his wife is a widower.

Yeah 'widow' is the correct term for a wife who loses her husband.

(What if CSB's character cross-dresses as a man to get revenge? LOL I kid. I kid. If we could just get one sageuk without cross-dressing nowadays...)

I keep this drama in my list-to-watch since it is from Kill Me Heal Me director's work.

So, who will take care Kong and Mong while he's on the set? XD. By the way, I hope Lee Seo Jin and Eric can visit him on set or sending love truck to the giant baby.

I was waiting for this kind of comment. Kongie and Mongie's father will be working hard. >,< I hope Seo Jin and Eric will support him too <3

It's 30 episodes, I hope it's good and not like MBC draggy Monday melos the way Monster or Glamorous Temptation was.

Yoon Kyun Sang and Chae Soo Bin are talented, they make a fresh pairing but I just hope netizens don't hate on her too much for being unknown or not being lead before.

Well, two young actors trying to make it in drama land. They have my support although I'm not a fan yet.

Where is Honey Lee and the amazing Ahn Nae-sang? Glad to see Kim Sang-joong <3.

I guess this Hong Gil-dong is destined to die single. What a waste.

I like that this is a fresh pairing that actually gives a chance to a young actor and actress who are not that we'll known yet, instead of running after already popular actors and bad idol actresses like some other dramas.

At least they have talent even if they are not perfect, he was good in Pinocchio and she was really good in Sassy Go Go.

Exactly! Rooting for them.

I've seen more of Yoon Kyun-sang in SFD but very little of Chae Soo-bin. I can't say I know them well enough.
They have a strong supporting actors and they'll be fine.

@Kiara - they've been paired up twice already for shorter works, their chemistry is great.

So they have the romance part down, and from everything I've heard, they'll have the sageuk part down too even if it's not as expert as more experienced actors. Like you said, they'll be fine. I just hope the drama doesn't screw the pooch and do them a disservice, this needs to be good.

Why am I cheering for him to die single? We can both die single, I guess. Win-win?

You know I wanted him to be single in SFD but Han Ye-ri showed up and I couldn't stop shipping them lol.

Hope they don't make it like Kang Ji-hwan's Hong Gil-dong. Him and Sung Yoo-ri made nice pair though. Instead that HGD, they can make it like DaeMang(Great hope) where they created their own kingdom and had happy/hopeful ending.

Ikr? It's fictional so I hope that the title changes means they'd let him live with his people.

Really looking forward to this pairing and the overall story!!

Same, I just hope the story is good and not makjang like MBC's usual long dramas. It's also a sageuk so there will be a lot of political stuffs....

is mbc going full force saeguk next year? as far as i know there are three line up. this one. ruler: ysh & ksh. kings heart: siwan & yoona

I'm looking forward to this all around, but am I the only who is most excited and fascinated to see what perenial cutie pie Kim Ji Suk does as the mad king Yeonsangun?! I hope he goes just all out. Really could be cool!

Loving CSB in Sassy Go Go, but her role in Moonlight was not as meaty. I think now she's back in her best type of role, vengeful and bitter. Hope she can slay this role!!

She definitely is a lead role material. Her portrayal in Sassy Go Go was really convincing and I like her more in Moonlight Drawn by Clouds.

I'm looking forward to this drama because I loved THE KING'S DAUGHTER, SOO BAEK-HYANG. Writer Hwang Jin-young penned some truly memorable characters in that Three Kingdoms-era story with a lot of heart. Thirty episodes is far shorter than the 108 installments of KDSBH, which got truncated from 120 because of the Sochi Olympics. I'm optimistic that the writer will be up to the task. Incidentally, Kim Byung-ok played scheming minister Yon Dolsol to perfection. It'll be fun to see him in another sageuk.

Not sure about the new name- Rebel Hong Gil Dong rolls off the tongue easier. I'll probably just shorten it to Rebel. Excited for this drama though! I've never watched a drama 30 episodes long but I'll definitely be tuning into this one because I loveeeeee the cast! ?

I love how Yoon Kyun-sang looks like a complete and utter dork in these pics! He looks like someone just dragged him out of bed and now he's very confused as to how he got here! Looking forward to this drama even though the episode length might kill me.

Can they stop the sageuks ??? god, they're boring

These two have great chemistry too - I hope the drama does justice to its romance.

I just hope it will be happy ending not tragic