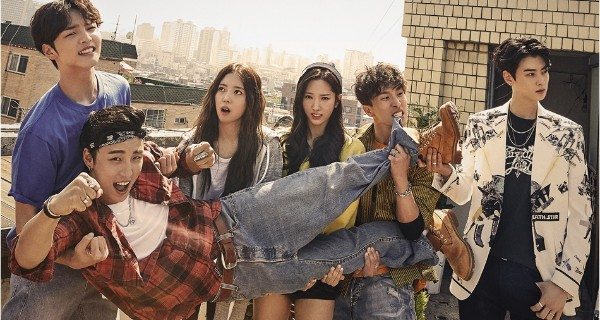 Behind-the-scenes stills from the poster photoshoot for variety-drama hybrid The Best Hit have been released. Comedic actor Cha Tae-hyun (The Producers) will be co-directing this youth-centric drama alongside his longtime colleague and friend 1 Night 2 Days PD Yoo Ho-jin. The main trio starring in this new project include another 1N2D alum Yoon Shi-yoon (Mirror of the Witch), Kim Min-jae (The Lonely Shining Goblin), and Lee Se-young (Laurel Tree Tailors).

The story is about how young people in their twenties navigate the difficulties of life, relationships, and careers. Yoon Shi-yoon stars as a famous musician whose reputation goes down the tubes due to several unfortunate incidents. Kim Min-jae will be a model student who hides the fact that he’s secretly an idol trainee, and Lee Se-young plays an optimistic civil service exam student who has already failed three times.

The other budding idol-actors on the cast include Dong Hyun-bae (aka Taeyang’s older bro), ASTRO’s Cha Eun-woo, and Cosmic Girl’s Bona, who are shown in the still cut above. Cha Eun-woo’s character is a top star, and has the outfit to match that diva personality in the stills. Dong Hyun-bae plays a musician, while Bona plays a haughty idol trainee. Rounding out the rest of the secondary characters are Yoon Son-ha (Six Flying Dragons) and singer Hong Kyung-min (Sing For You).

While I’m not entirely too sure about where the plot will take us, I love that they’re trying out this hybrid format again, and hopefully this time (unlike The Producers), it’ll be a bigger success. KBS Friday-Saturday variety-drama The Best Hit will premiere on June 2. 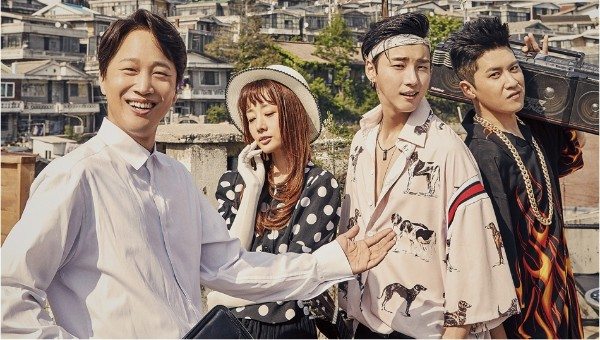 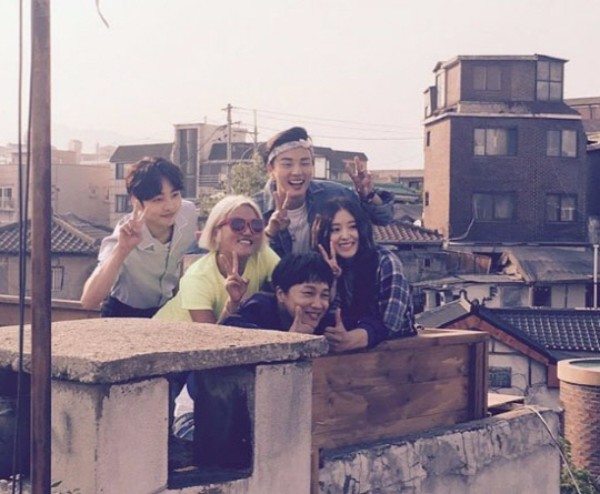 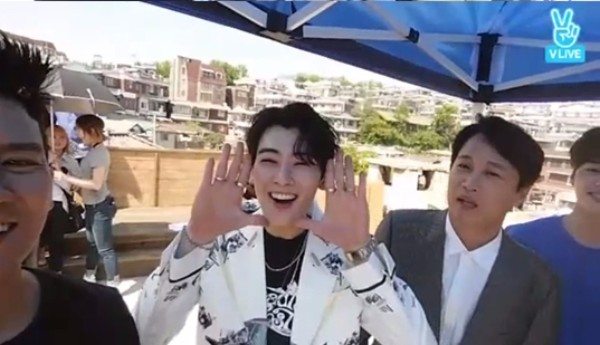 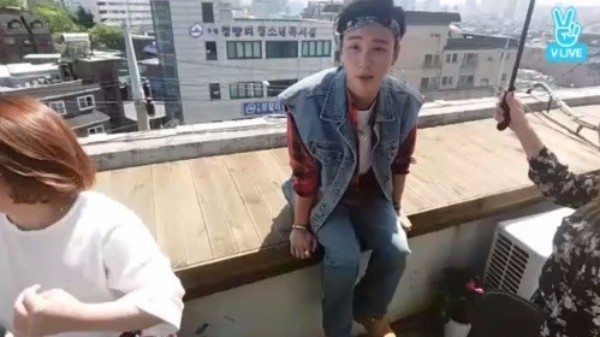 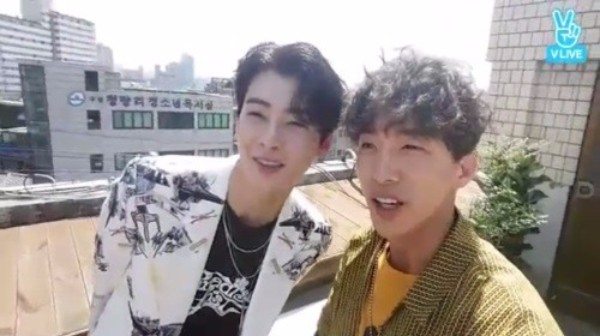 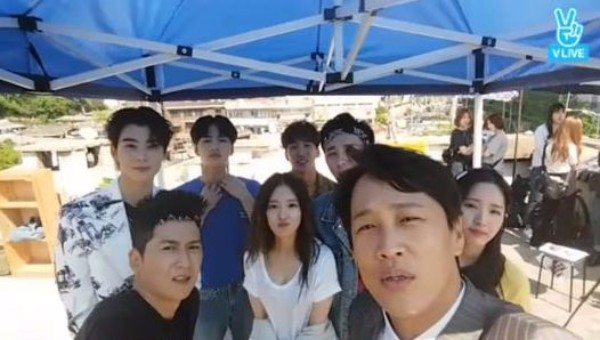 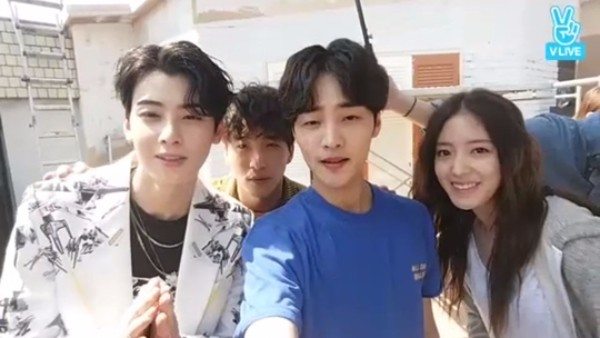 Hm, after how great a surprise Liar turned out to be, and I love the dude Cha Tae Hyun, I might be checking this one out too.

Oh my glob i'm excited for this. The posters give a hopeful young vibe *-*

I'm lovin the sound of these characters, hope it's going to be good (it also makes me happy that YSY is working with CTH outside of 2d1n)

I feel like YSY still feels a little unsure of himself sometimes on 2D1N, but CTH boosts his confidence up a little bit. I really like their relationship.

Oh my so excited about this!!!

Not so sure about the idol actors, but Taehyun + Donggu kaaaaa

Aw, I love how playful these photos look. It kinda reminds me of the posters for The Lover--it had the same slice-of-life, youth and carefree vibe to it. Anyways, I actually forgot about this one, but now I'm excited to see a teaser or trailer. Yoon Shi-yoon is lookin' GOOD.

I wonder how rookie idol actors + mockumentary style (that's what it is, right? I've been out of drama touch for a while) will go... If that will help them or make it more obvious that they're inexperienced. I haven't watched The Producers yet but I was always interested when I heard about how it was supposed to be filmed.

The mockumentary style didn't last long in The Producers. It's like they lost courage to continue with it due to the ratings and switched to being a much more traditional drama. If mockumentary is really what this drama is going for, I hope they stick with it!

Hmm i wonder how the mockumentary will work out. It was great for the producers because of the office setting. Cant wait to see how this goes

I'm really looking forward to this! I think the mockumentary style is so interesting and I will never say no to YSY on my screen...

Thanks for the update, tineybeanie! I don't want to miss this one. ;-)

Gosh I am waaaay too excited for this drama

That boombox and their outfits are totally screaming late-80s/early-90s to me.. Is this gonna be set in modern-day Korea? I haven't watched a really good coming-of-age drama, featuring a young ensemble cast, and focused entirely on them, in a long long while... I'm hoping this will be close to "Shut Up! Flower Boy Band," "Dream High," or...the old old Japanese dramas, "Long Vacation" and "Over Time."

The outfits were what caught my eyes, I hope this will be funny and good entertainment kinda show.

Ditto! I grew up in that era (certified ahjumma here) so nostalgia kicked in. Lol!

That and the colour tone of the teasers

Pretty keen for this one- glad they're giving the mocumentary a second go, I thought it was a hilarious format in producers and was bummed when they dropped it. There looks like there's gonna be a whole lot of handsome in this drama!

I didn't know Dong Hyun-bae will be on this one! He really is Taeyang's brother if you are going to look at the last photo. The resemblance is uncanny omg. I'm not sure what to expect with the 80s clothing but i'm still excited!

Lol wait is it just me or does yoon shi yoon look different? I couldn't recognize him in the first few pics

He does look a little bit like Jinyoung in these pictures, doesn't he? I think it's the eyebrows and the expression.

(And he's dyed his hair dark, which I love)

All the best to PD Yoo! May this variety drama be The Best Hit!

Finger cross hoping this gonna be good. This better be good for I really like people involved in this project especially Cha Tae Hyun!

Have been staring at the first still for awhile before realizing that, no, Dong Hyun-bae was not biting Yoon Shi-yoon's jeans ><
Still about a month away, boohoo... Am excitedly waiting for this.

That's what I thought as well when I first saw the pictures. =)

6/2!! Noting this down!! Totally watching this for Siyoonie and CTH plus KMJ!! ?

I love experimental dramas so I'm expecting it to be good.

I'm hoping SO HARD that they're really able to stick to a hybrid format. I loved the first few episodes of the Producers, which implemented a much drier tone of humor than an average Korean show, and made my comedy-loving side sooo happy. I was desperately disappointed when it became like any other drama, and hope they can set a unique tone and stick with it this time. I'm even more excited because of the 1N2D influence, which was my first variety show, the one I've stuck with the longest, watching on and off for 6 years now, and the one that started my variety show addiction. Now I watch far more variety shows than dramas, so I'm always happy to see them intersect!

This looks so much fun! I love Cha Tae-hyun and I would watch anything for Yoon Shi-yoon and his sparkly eyes!

I can't wait for this!! Donggu looks the same age as the young cast with his baby face.

Looks like they're having tons of fun with all hairdo's...
Enrique in panda is enough for me #SaidTheGirlWhoCannotMoveOn, but I'll check YSY here too!

I'm intrigued by the concept, despite the vagueness of it all as of yet, and really excited to see what PD Yoo and CTH directing a drama will look like. The only drama I've seen YSY in is Me Too, Flower! which was really bad, so I'm a bit skeptical, but slightly hopeful, of how he'll do.

You need to check out Flower Boy Next Door! That's where my love for him began.

i really hope this one's good. Haven't seen Yoon Shi Yoon in a solid drama for a while now.

I'm really excited for this, I loved the first 2 eps of Producers and I hope they stick with the format this time.

Maybe I'm the only one who think DB made an incorrect name, and then I remember Donggu's actor name is Yoon Si Yoon. LOL

Hmm this looks Interesting and it sounds like "Because it's the first time"...Curious?

I'm loving the stills! The vibe definitely gives off the fun, youthful aura and the actors look like they're having a great time. Will definitely give this a look and hope it turns out great.

Yep, I'm actually super excited for him. He didn't do too bad in To Be Continued.

I really like the vibe in the posters too! Hopefully the drama capture the same energy we see here!