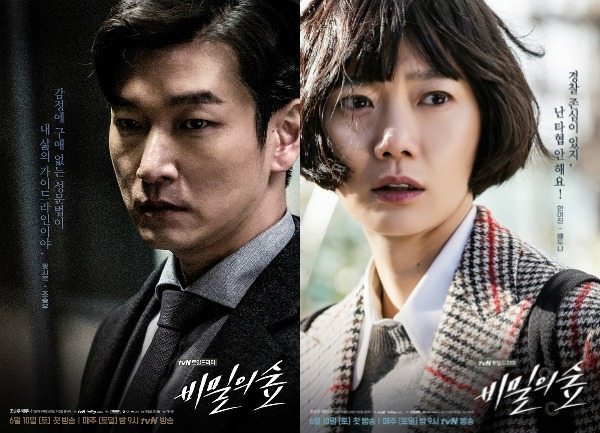 We only have one premiere this coming week, and for once I’m grateful it’s not more! Dramaland has dumped a whole slew of shows on us recently, so it’s nice to have a little breathing room, and focus only on one newcomer at a time. Some of us are still trying to catch up on sleep from all those other premieres!

Reasons to watch: Jo Seung-woo and Bae Doo-na, for sure. He barely ever does dramas, but remember how awesome he was in God’s Gift–14 Days that we—and the show itself—nicknamed him Captain Awesome? Jo brings an intensity and gravitas to television that carries over from his film and theater experience (Inside Men, Tazza), and he can be very personable as well—even if his character here is more on the unfeeling end of the emotional spectrum. Bae Doo-na is similar in that she’s been more active in recent years in film (and crossover Hollywood) projects (Sense8, Tunnel, A Girl at My Door), but she’s always welcome back in dramaland.

Forest of Secrets is entirely pre-produced, and while that has been hit or miss in its results, in this case I think the extra production lead time will be in the show’s favor, as it looks tightly plotted and suspenseful. Set in the prosecutor’s office and dealing with corruption within the system, I’m anticipating shadowy characters with hidden motives and dark secrets—it’s this setup that makes up the metaphorical forest of secrets that our main characters find themselves navigating, one as a cold prosecutor (Jo) and the other as a warm detective (Bae). It doesn’t look like a light watch, but this might be one for you if you’re in the mood for something meaty and dark.

I'm looking forward to this for the cast alone. It'll be nice to see more of Bae Doo Na (I'm still heartbroken over the cancellation of Sense8) and I've wanted more Jo Seung Woo ever since watching God's Gift. The plot is less exciting to me, but I'm going to give it a shot.

Don't even get me started with Sense8. ?

They need to make at least a movie to wrap up some of the plot man!! They just gonna leave us hanging like that??? Grrrrrrr.

I'm so sad. I loved Sense8. Sun was one of my favorite characters.

Same!!! Also there's still a whole story left to be told too. I actually thought sense8 was doing really well, so i don't understand why it was cancelled. Maybe the creators can find another platform to produce it on, or at least make movie to finish up the series.

I think that the cost to viewer ratio was too small. This show had a hige budget since it required filming around the world and not "enough" people were watching. Which is a shame. This show was so good and had such a wonderful message.

If it's not netflix covering the $9M an episode budget, no one will...:(

Yeah!! Her story line in Season 2 was really great... The fight scenes, the emotional beats... everything was super on point. And I was looking forward to seeing what happens with her and Detective Tight Pants!!! It's tragic.

At work, we call him Detective Hot Cop. Season 2 was even better than the first one and I am just so upset. You can't just cancel it with THAT as the ending.

:(
Still hope other network picks this or netflix to make special ep or something to wrap the story but isn't likely to happen T_T

Ugh. That news was awful. It is painful until now.

damn. I have to go reflect on this new information.

I honestly dont like procedurals at all and I agree when you said that we are already getting enough of them because for me it limits me toa few shows and also leads to a drama slump-once when in this year every channel had procedurals airing at the same time. I am sure the Korean audience must be fed up too, the same genre can bore you and honestly the description of this show is still pretty vague and ordinary. I hope there is more to it than what os told because it just looks like a corporate battle type drama whose chunks are present in almost every other drama.

> Wouldn't it be more judicious to balance the suspense of Circle by something lighter on Friday?

The Big 3 networks have really nice line-up of feel-good dramas. I was filled with crime suspense/action/fantasy dramas since fall last year, and I'm glad that the Big 3 are offering lighter dramas for spring/summer. I'm not Korean, but you can tell that other than "Tunnel" and "Voice" in OCN, some late winter/early spring cable dramas just had a so-so reception.

Hmm... Maybe I'll binge watch it later too. I'm tired of police/legal shows now. Starting from the Defendant to Tunnel and other shows, there's been way too many of these shows. I understand that there's a trend, but don't broadcast stations realize that people get tired of it? There's also been a little bit of time travel trend too lately.

Too much drama, too little time. How should I fit this into my packed drama watching schedule? I really want to watch Jo Seung-woo and Bae Doo-na's comeback to dramaland.

I am so hyped for this it's almost getting ridiculous. Have you guys seen the short behind the scene? They were soooooo cute together and I'm like T.T
Can't wait!!

Too many dramas but will try cos sounds interesting

I already have Duel on Weekend but if I add-in Forest of Secrets on my plate I don't see any wrong LOL.

I know right, too many new shows this month and though I love the ones I'm already watching, we do need a breathing space. This will be the last addition on my 5-currently-watching-dramas. Ha! I've been looking forward to this because it's Bae Doona.

I am so stoked to watch this!! Bring it on.

Well, I love procedurals and thriller/action dramas. I grew up watching L&O with my brother. Though I might have to sacrifice my sleeping time.

And I still need to some type of redemption for Jo Seung Woo after God's Gift - 14 Days' ending.

I am so glad there are so many good thrillers etc. on right now. I love a good procedural!! Who doesn't love solving mysteries!!

L&O is classic (I will always have a soft spot for Jerry Orbach, RIP). Who doesn't love that iconic *donk donk* from the opening?? That was my favorite part hahahahaha

We are so #blessed right now. Tunnel, Queen of Mystery, Lookout, Duel, Forest of Secrets and the upcoming Criminal Minds and Save Me.

That *donk donk* is ICONIC. I could already hear it in my mind, once I read your comment.

I also like procedurals and will keep an eye out for this, although I may wait for it to finish and marathon it instead.

So all my days from saturday to tuesday are taken between forest of secrets and circle? I'm ok with that:)

However I feel a little guilty: i wish i could reward Tvn in some way.

It's funny sometimes when i realize that i'm mostly in k-dramaland for meaty and dark shows with two or three exceptions/light drama per year , and this while it's still the minority of drama which can qualify as being dark.

Same here!! I have thrillers for 4 days out of the week and it's a blessing

One more drama on Saturday-Sunday with JSW in it? Bring it on, show. I still have Monday-Tuesday to catch up with sleep. ^^

I love JSW since Horse Doctor. He and LYW who made me able to endure all the ordeal in watching this sageuk drama. All 50 eps. *lol*

When I learned about this drama, I thought that I can actually watch this as it airs. But, now I found myself behind a lot of dramas (Chicago, Circle, and Duel) simply because I like the currently-airing spring/summer light dramas in the mainstream networks. I'm having a hard time getting my mojo back in watching procedural, or out-of-the-box dramas. Plus, life. So, yeah I might just marathon all of them later.

Definitely need to watch this show. At least for Jo Seung-woo!!

The cast makes it a must-watch for me. So you bet I'll be "premiere watching"

" is entirely pre-produced, and while that has been hit or miss in its results"

The same applies for non pre-produced dramas. Lots of misses there too – I do wonder why people's expectations seem to be that pre-produced should always mean perfect/hit?

Of course, I wish it would mean that the average quality of dramas would improve with pre-production, but even if that's not true, the fact that working conditions for pre-produced dramas are better for everyone involved wins out for me.

As for Forest of Secrets – BAE DOONA. Nothing else needed for watching.

Finally the week of just ONE premiere! And, this is the show I have been looking forward the most, since the confirmation of castings. The day has finally comeeeee

I absolutely love Bae Doo-na but the premise isn't the type of drama I care for. I'm not a big fan of legal thrillers. But if the show is getting good reviews I might give it a go just for Bae Doo-na.

A new drama?? oh mann... I'm still all over the place to catch up the last batch ( Fight my way & the others)... but the casts tho, Bae Doona... I watch the first ep just for the casts alone.

I am one of those that got swamped with the new shows last week. I love the cast and looks really interesting. Will definitely check it out.

I'm here for Bae Doona. Dark show are not my thing but I will watch for her. Hopefully there will be a recap for it so I can understand the show better.

I am the only one who interests in this drama because of Lee Gyeong Yeong hahaha...

I am swamped with shows... but I will try this one in any case, because I love the cast.

GAIS this is so good someone tell me you've watched it at well. Like WOW Jo Seung-woo. Killed episode 1. Hope for more #Bae in the upcoming episodes as well.

how to watch it with english sub?

I am so happy this show is definitely right up my alley. All the new shows and all, I was really trying to find something to watch that's as good as 'Whisper'.