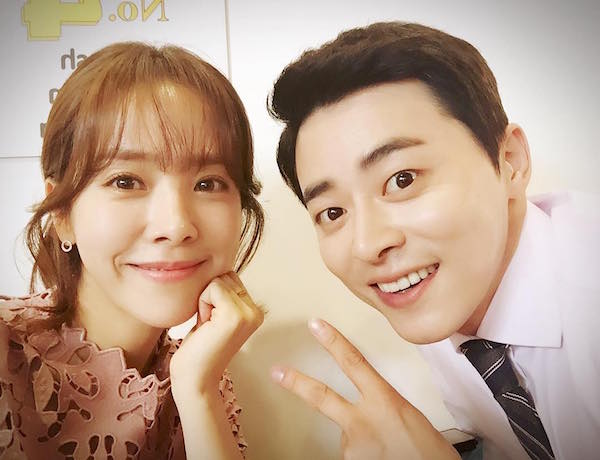 We’ve got a possible drama reunion in the making. Han Ji-min (Hyde Jekyll Me, Age of Shadows) may be making a comeback to dramaland later this year for the new supernatural rom-com Two Cops. Actor Jo Jung-seok (Jealousy Incarnate) is currently being courted to headline, and both actors are considering favorably. Two Cops was the winner of KBS’s criminal miniseries scriptwriting competition, submitted by rookie writer Byun Sang-soon, and it’s a supernatural comedy about a doggedly righteous detective whose body becomes inhabited by a sleazy swindler’s soul.

If Han Ji-min and Jo Jung-seok end up working together for Two Cops, it’ll be their third matchup. They were both in the historical film Fatal Encounter with Hyun Bin, and Han Ji-min made a cameo appearance in Jo Jung-seok’s SBS drama Jealousy Incarnate last year, as a woman he went on a blind date with who made Gong Hyo-jin green with envy. For Two Cops, Han Ji-min has been offered the role of Jo Jung-seok’s main love interest, a tough, sassy reporter.

This drama seems to have tropes that were present in Han Ji-min’s Hyde, Jekyll, Me (a man with two personalities) and Jo Jung-seok’s Oh My Ghostess (two souls, one body), so they should be pros at dealing with this kind of supernatural premise. For now, it seems like Two Cops is off to a good start with the casting, and I’m eager to learn more about the story as we go.

As of yet, the fantasy-mystery-romance drama is not firmly attached to a broadcaster, though it is being considered at MBC for a fall airdate.

I feel like everything he touches turns to gold. Woo hoo

I've watched HJM several times, and found her a bit plain. Hope this one works, though, as I love JJS a bit too much. What is Seo Hyun Jin doing these days?

what? Where did you read this news? ? This writer made me wary ?

Ugh… oh, I'm not a fan of the writer. Stopped watching Doctors at ep 2 and casually abused my fast forward button while watching HIgh Society until the button died and I stopped watching. it. completely.

OMG YESSSSS!!!!! Love this combination!!! Can't wait for both of them to nod their heads and start filming!!!

There goes my hope to see Jo Jung Seok - Seo Hyun Jin pairing ?
I think Han Ji Min can be a hit or miss. But she's not a bad choice. I'll watch anything for JJS!

was she any good in hyde,jekyll? as far as i recall not a good actress..

don't get it.. anyway with all the plastic surgery most of the actressess seem to have the similar face cut and looks.. coupled with the fact that probably korean women are genuinely cute kinds..

I know nothing about her either because her character seems not too strong in every drama so I decided not to watch it.
but I'd like to give it a shot because JJS in it, maybe for 1st episode.

What? Are you acting expert to say it easily that she's not good? Wtf
You don't even watch all of her works yet..
She is a very respected actress in South Korea and has a successful career
Hyde and Jekyll was just a bad written drama

Why are you the acting expert to say that she is good?

Don't get a heart attack by getting these unnecessary panic attacks..

Whatever i have seen her in, she is bad! if as an actress she can't convey emotions of her character that's bad acting.. it doesn't need rocket science to analyze

This drama seems interesting and I'm curious to see how this pairing will turn out. But I'd watch anything for JJS!

So we'll see her get confused by two contrasting personalities living in the same man, again? :/

LOL, yeah. I can't be the only one cracking up at the fact that, after starring with both Hyun Bin and Jo Jung-seok in a movie together, she may now have two drama romances with each, involving such a similar premise! What are the odds, lol.

Lol, I'm also amused by the article writer's comment that she's a pro dealing with such premise. Hopefully she portray her state of confusion differently this time.

Yes!! It's not a young rookie idol actress!! Although I would prefer another actress over her. I should take what I can get. ?

Oh this is nice, I miss Han Ji Min in a drama.

I like Han Ji-min playing feisty woman. And from her short cameo appearance in Jealousy Incarnate, they do have sweet chemistry together. Hopefully it'll be great.

I thought Two Cops was a movie! Yay!?

I can totally see him pulling off the sleazy swindler bit??

Right? That was actually him in the K-movie Hyung, so I can totally see him as a sleazy conman, too. This guy's so versatile.

that movie wrecked me...

I loved her in Rooftop Prince!I hope she accepts the role.

She was quite good in Rooftop Prince. Such a fun drama! One of my faves.

no han jimin!
can we have im soo jung here?maybe??plzzz?

no to im soo jung pls, I like her but she's not a good actress imho

Oh, okay. Han Ji-min's pretty and I like her, but I'm not all over her casting news as I was with Jo Jung-seok's. I'll wait and see how everything turns out, I guess.

Hahah I'm not trying to imagine Jo Jung Seok acting as sleazy as Park Bo Young did, it would be utterly hilarious!

I don't understand the aversion to Han Ji Min, I think she's lovely.

I was really hoping for Seo Ji-hye. Han Ji-min can be hit and miss, but I'm still okay with her casting. I just hope this drama isn't like Hyde, Jekyll, Me in any way. That was trash. The worst drama I've seen, and I've watched at least a hundred now.

Han Ji-min? Eh, she's fine, I guess. But for the heroine' character description, she would'nt be my first choice. Or my tenth, for that matter.

Not excited with the potential pairing. The female should be as capable of kissing back as JJS is capable of giving it. If it is not final and there is no height difference in the woman's favour, i like it to be EHY (the Coffee Prince half).