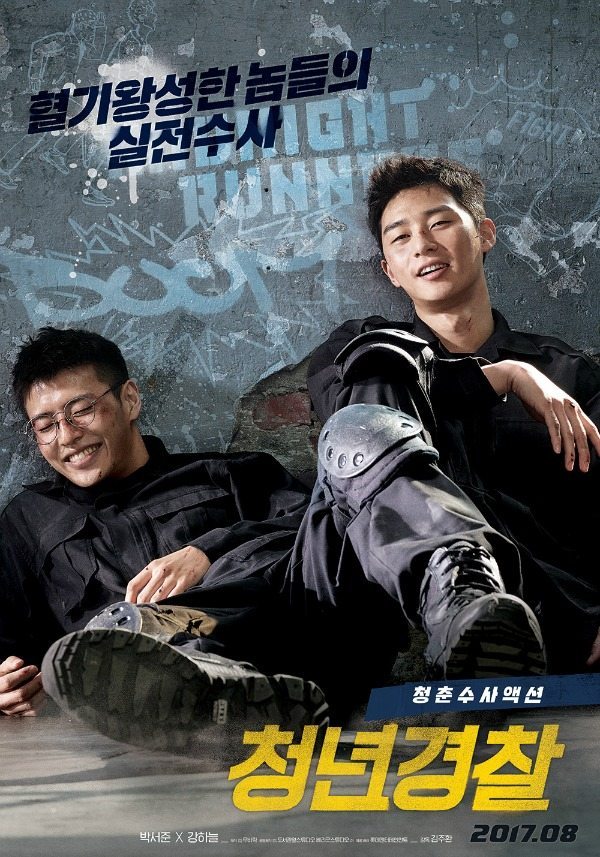 Ha, the bromance is strong in this one. Park Seo-joon (Fight My Way) and Kang Haneul’s (Moon Lovers: Scarlet Heart Ryeo) upcoming film Midnight Runner, or Youth Cops if you translate the Korean title literally, is set to premiere in theaters in a couple of weeks. This is one of Kang Haneul’s last film projects before he enters military service, and since he had to back out of Bad Guys 2 last minute, I’ll just have to console myself with Midnight Runner and his other upcoming film Recall the Night.

The action comedy will center around two students at Korean National Police University who get caught up in a kidnapping case when they are the only eyewitnesses to the crime. When the authorities, and their future sunbaes, reach a dead end due to lack of evidence and frustrating bureaucratic obstacles, they decide to embark on their own amateur investigation, which gets them into all sorts of hilarious trouble.

What I’m most looking forward to, though, is the comic bromance between the two boys. You can’t exactly call them two peas in a pod: Park Seo-joon is a punch first, ask questions later kind of guy, while Kang Haneul is a bit of a dork and a stickler for the rules. But this is one of those “opposites attract” situations, and it’s so cute watching Park Seo-joon teach Kang Haneul how to fist-bump and question a suspect (“use banmal”). Though Kang Haneul’s studiousness does pay off when he gets all the answers to instructor Sung Dong-il’s (Real, Hwarang) questions, and takes down a suspect using what he learned in combat classes. I love how he’s as surprised as anyone else when he manages to do it: “Whoa! Try it like they taught us. It actually works.”

I love a good comedy in the summer, and Midnight Runner looks like it’s going to offer some quality funny with a good dose of action and bromance thrown into the mix. The film will premiere on August 9 in Korean theaters. Can’t wait to see Park Seo-joon’s chicken poses and Kang Haneul flipping everyone off! 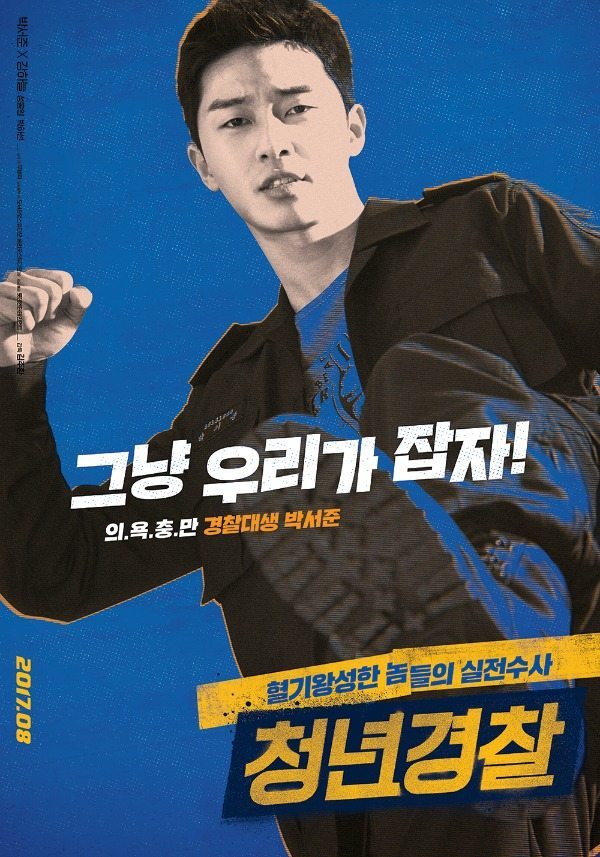 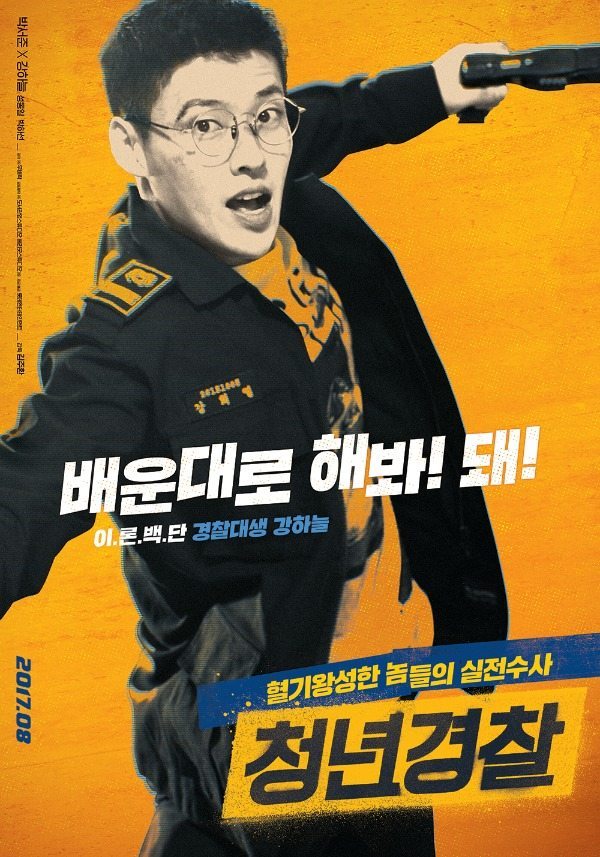 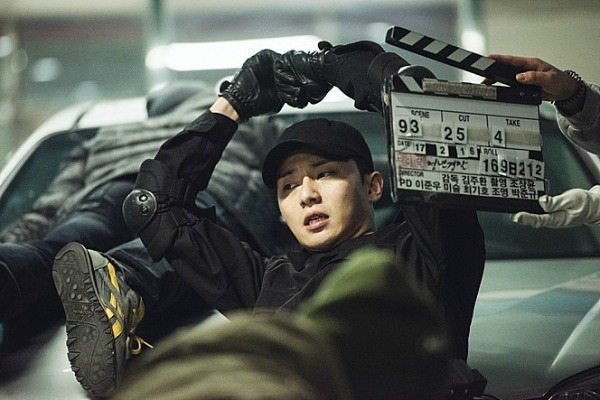 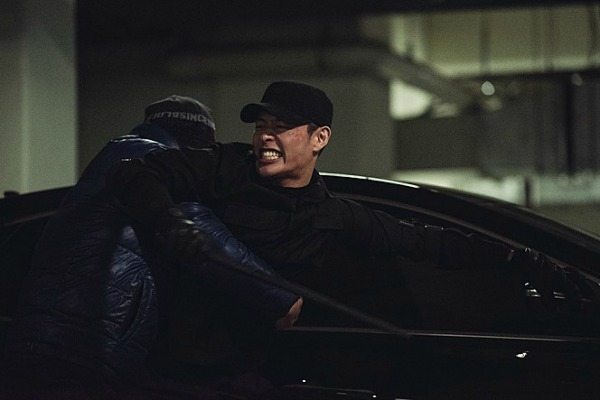 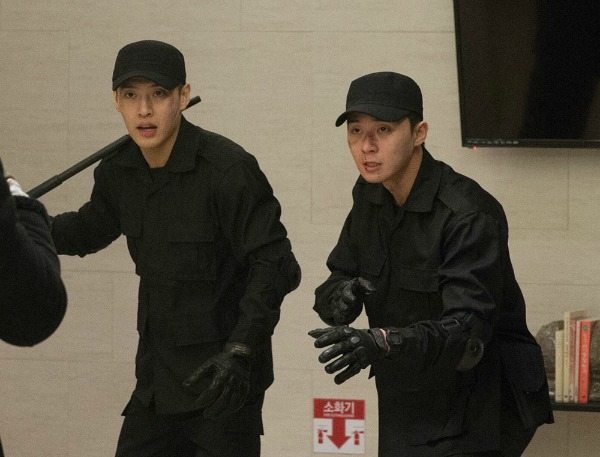 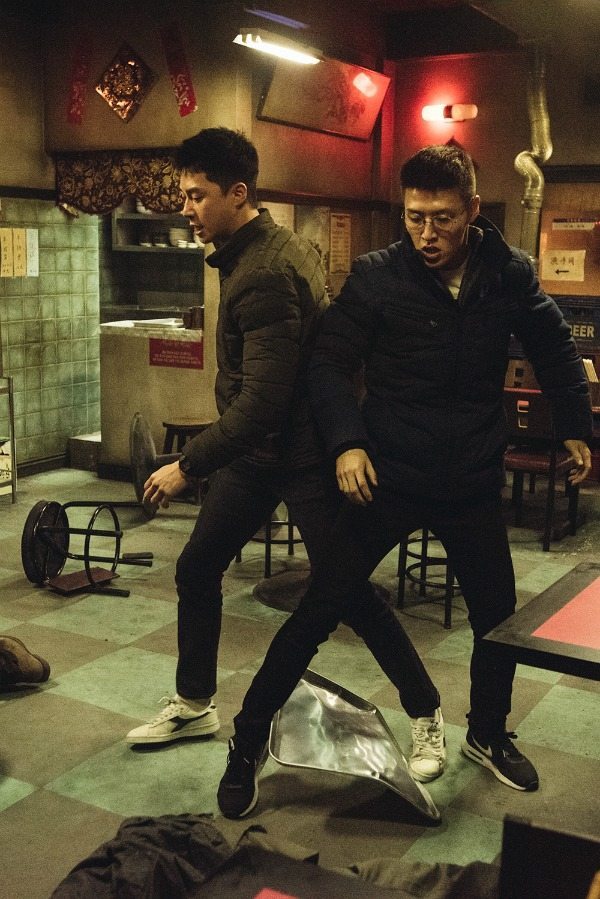 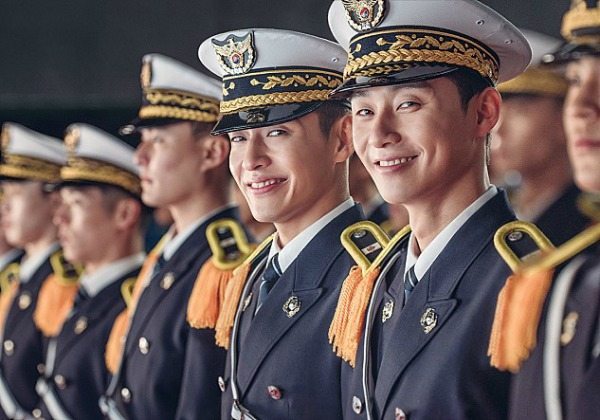 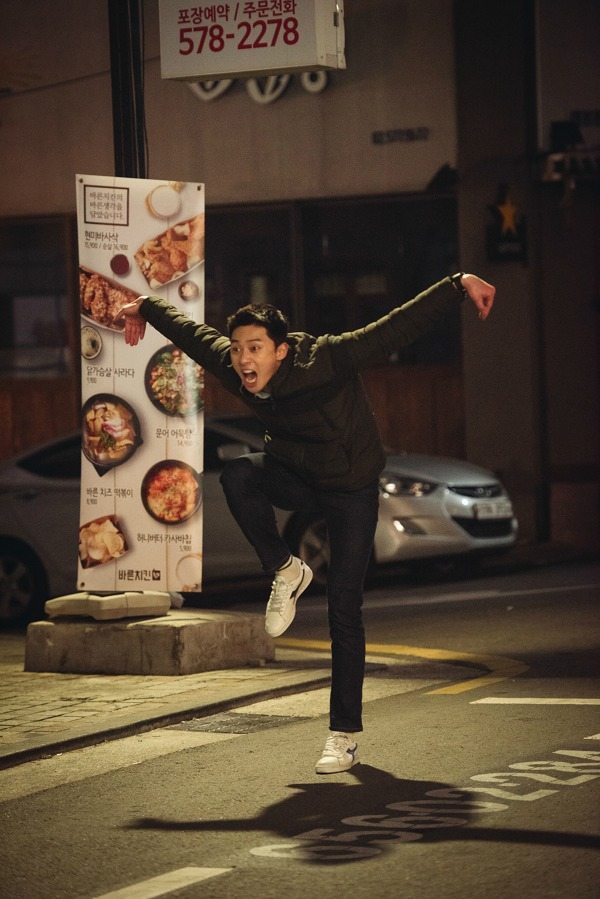 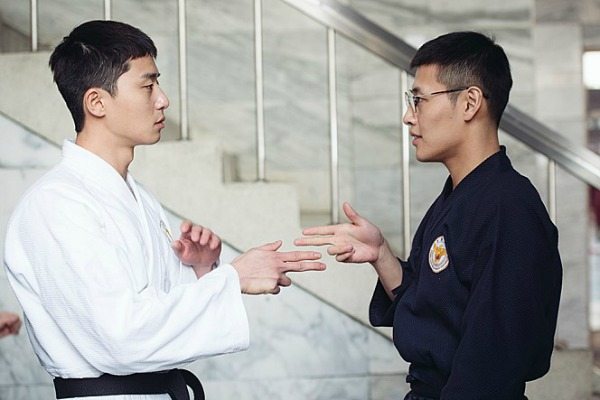 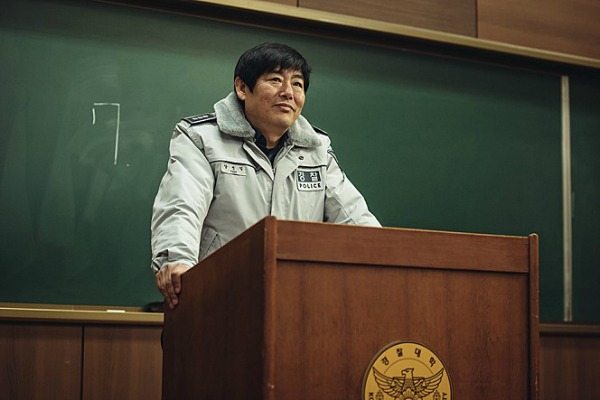 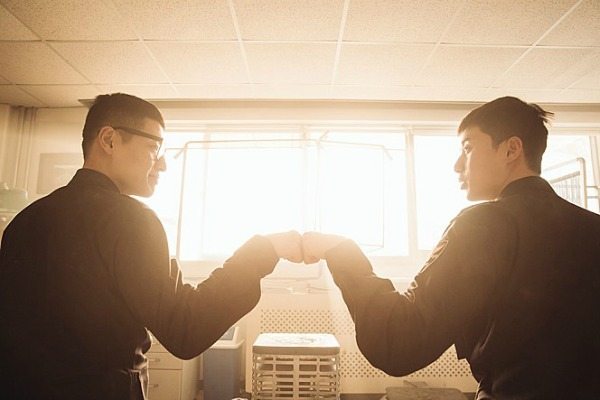 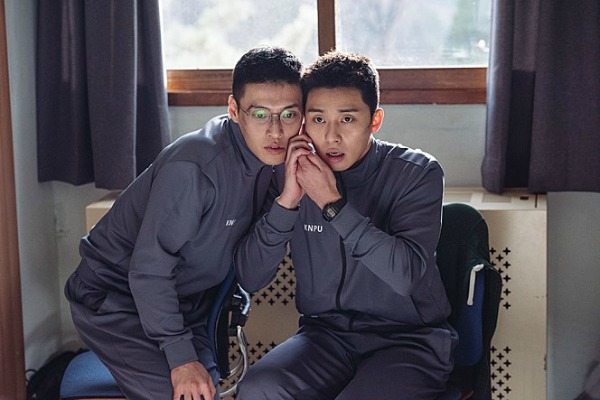 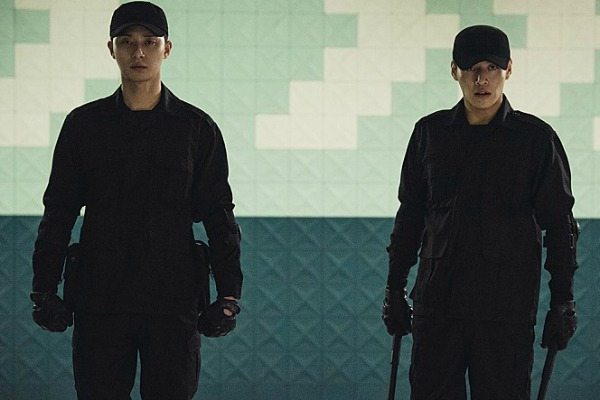 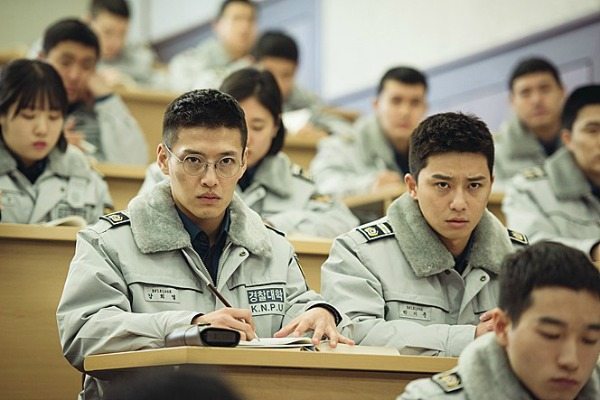 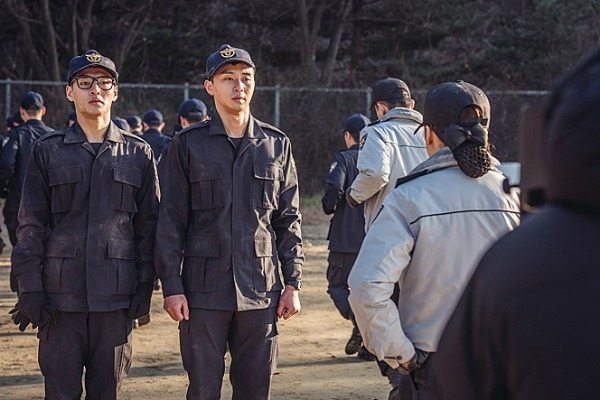 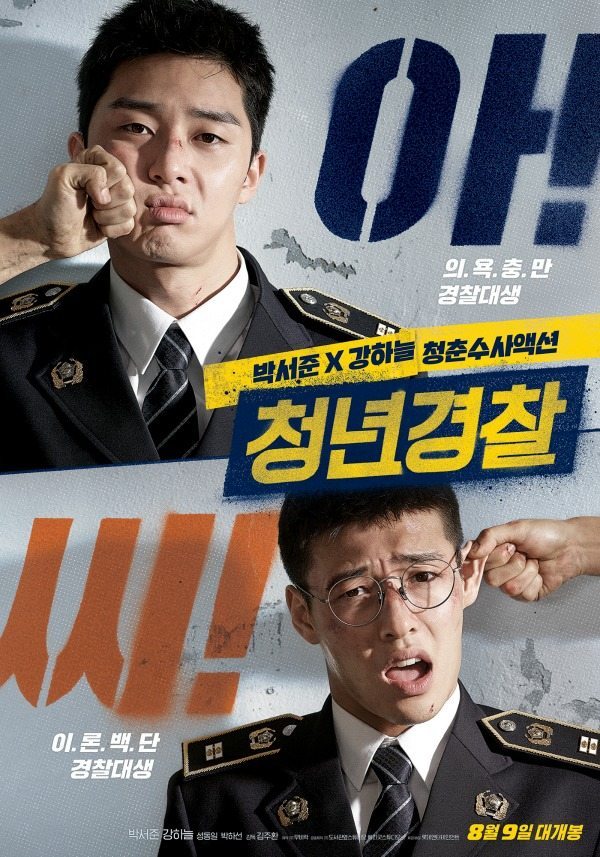 Yay! Super excited for this bromance.

I was so looking forward to Bad Guys 2 with him in it :( Oh well, I hope when he comes back from the army we can finally see him be the lead in a drama ♥

I am so ready. Crime, action, comedy and KHN+PSJ - what more is there to wish for?

This looks hilarious and who can say no to this epic pairing? I only wish that I didn't have to wait, who only knows how long, to see it.

Oh these two! It looks fun and funny!

And there's Sung Dong-il once again. He is soooooo busy. The actor appears in what seems like every movie and drama! Heh.

And so Park Seo-joon attacks yet again with ANOTHER bromance.
I'm not complaining. Especially if it's Kang Haneul
Bring it on

Will Kim Haneul be in active duty?

I can't even express how excited I am for this movie! I've been waiting for it ever since they first announced Park Seo Joon and Kang Ha Neul as the leads. They are so good when it comes to bromance especially Park Seo Joon, I hope the movie will get an international screening.

The publicity for this has been beyond adorable. I can't wait to see it.

this is the pairing i never knew i wanted! park seo joon and kang ha neul have been my leading men for a while now...the bromance looks hilarious. this needs to tide me over until his return.

omg, these two together is a dream come true. LOL at their dork faces.

I don't want to see one of them die in this movie, you hear me? Korean Movies who are tagged as comedy ALWAYS make us cry in the end.

Totally true, am so eager to watch this but first I need to know it has a happy end!

OMG so true...I'll never forget how traumatized I was after watching Hyung...

Be still my heart ❤️

They're too cute. I'm just so happy that both my biases that were so underrated before are getting so much love.

I really can't wait to see this!!!! I've been wanting KHN to do another comedy film because he's been so great in his prior performances, and now I couldn't be more excited that this also includes PSJ as costar!!!!! I hope this one sustains the hilarious hijinks and fun atmosphere all the way through and avoids the drippy melodramatic mess that so many Korean "comedies" end up heading toward in the end. We need something to cheer us up after the end of Fight For My Way!!!

This looks so fun!! Really need to see Park Seo Joon on my screen soon :P

Oh my gosh...I love it already!!! Not often I laugh out loud that much from a preview. So looking forward to this....looks fun!

I am so not ready to lose KHN !
His last memory I can hold in 2 years for 20hours of tormented dark soul flippery love from the 8th prince?

I mourn his back out from Bad Guys real bad. This is remedy. He should act like Twenty for the rest of my life, sunray everyday :)

We just had the teaser and it is already so much fun! I am super excited with this one, especially the bromance!

I wouldn't miss it for the world!!! Too much love for these two. ♡

May I ask who will be replacing Kang Haneul in Bad Guys 2??

Why does PSJ looks like he was born to be a comedic action star?

because he was indeed born to be comedic action star?

I will cheer on PSJ if he aims to be K-version of stephen chow.

love these two!! it looks hilarious can't wait to watch it!

It's been a while since a trailer made me laugh so much hahaha!

This has FUN written all over it, with capital letters ... Their chemistry is palpable from the posters alone! Can't wait! ?

When did Park Seo-Joon have time to shoot a movie? Seriously, he's been working so much, he's constantly on the screen. Not that I'm complaining.