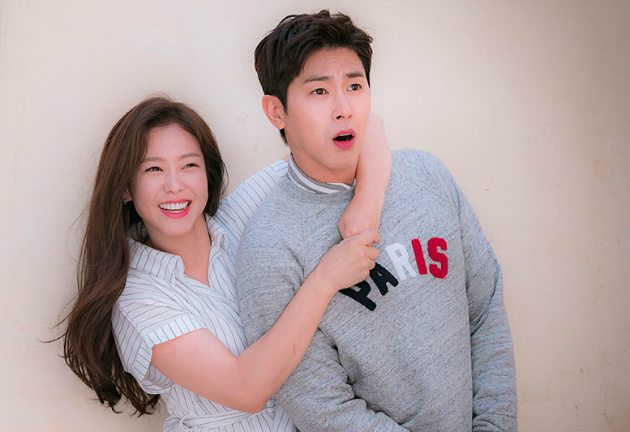 I totally forgot about this week’s premiere of Meloholic, the web drama that got picked up by OCN for its Monday-Tuesday block. It’s a supernatural campus romance that features fresh-out-of-army Yunho (Records of a Night Watchman) as a mind-reader and Kyung Su-jin (Weightlifting Fairy Kim Bok-ju) in a dual role, as a woman with split personalities.

Reasons to watch: The new drama from PD Song Hyun-wook (Introverted Boss, Oh Hae-young Again) stars Yunho as a pathetic loser who gets cruelly dumped by his girlfriend, and desperately wishes to know what women are thinking so that he can win her back. He suffers an accident one night that gives him that very ability—he wakes up with the gift of hearing and seeing another person’s thoughts whenever he touches them, but it only applies to women. Kyung Su-jin, meanwhile, is a classmate in his department who’s meek and innocent, but has a bold and sexually assertive split personality inside of her.

That’s almost one premise too many, but it certainly makes for an unusual matchup of characters. Plus, if the hero can read any woman’s mind, I can see how you would need a heroine who poses a challenge for him in some way. Hopefully the supernatural element is fun and provides a good catalyst for the romance. As for Yunho, I can only hope that he’s improved as an actor since coming back from army duty, and can carry half of a romance. Technically, if Kyung Su-jin carries two-thirds of the split-personality love triangle, he’ll only need to carry a third of it!

Yunho's ability reminds me a lot of the movie What Women Want. The premise sounds cute but I'm not sure on the cast. I'll still give the drama a go and hope both actors can carry the drama and have cute chemistry with each other.

I got the same reference with What Women Want.

Hoping an actor can carry a drama is a dangerous proposition in my experience. Yet, I do it time and again.

It's a lot more low budget than I thought it was going to be. I'll leave it at that for now.

To those who were able to read the manhwa first just like me and really like it, you need to watch the first 2 episodes to be able to appreciate the kdrama version. They did not take away the mystery part, which is the center of the story, but they give more clues on this one I guess.
The manhwa has a really dark and heart-whelming storytelling whereas this one is very fun and romantic (maybe at first).
The leads were pretty good actually here. As expected from Kyung Soo Jin acting in two personalities, she's really good. And their chemistry is on point. Anyway guys, its a good watch so check it out.

I agree about the leads. This is actually my first time watching Yunho in a modern drama. He is doing a good job as the leading man. His multifaceted character suits him.

I just realize the PD here is the same as Oh Hae Young that's why the OST is some what kinda familiar with the one of Meloholic.

The first 2 episodes look promising. I am intrigued by the mystery of disappearing boyfriends

It's ok, not that engaging and yea, the girl will have to do all the acting here. Yunho can only do so much. pretty girls on cameo for the first ep like Gong seong Yeon and some JaeHee girl. Too much kissing from insignificant couples and the story is just too scattered.

The girl is playing 2 characters instead of 1. It is more work but I can't give her all the credit. I thought Yunho was serviceable in his previous drama but I admit his acting is good here in this OCN show.

I tried the first episode. I'll have to give it a proper shot. His character got kind of an ego along with his powers so if he can ditch that it'd help. So far he's better than in I Order You. I had to look up the name so I guess that tells you right away what I thought of that one. And Ho-rang was in it too. It didnt even register when I first saw her on BIOFL.

I watched the first two episodes of this. It was surprisingly good. I know Yunho has a reputation of foot in mouth acting so I approached it warily. But I must say that he has improved miles and bounds since he left the army. There were no weaknesses in his acting which came off as really natural. Both leads carried off their roles very well, the plot is interesting and the directing is very good. A recommended watch.