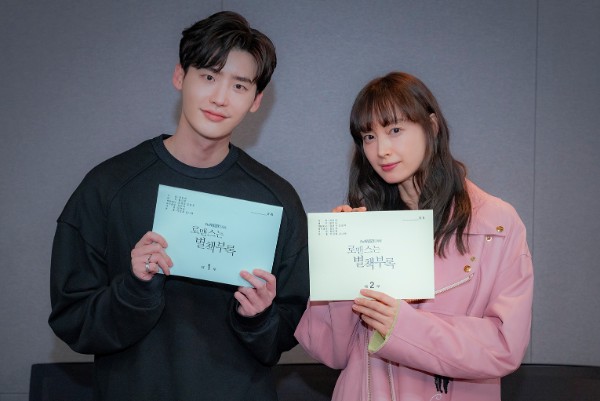 The lovely Lee Na-young (Runaway Plan B) and noona-killer Lee Jong-seok (While You Were Sleeping) will be starring in tvN’s Romance Is a Bonus Book, which just held its first script reading at the end of last October. PD Lee Jung-hyo of Life On Mars and Good Wife fame and I Need Romance series writer Jung Hyun-jung will be teaming up for this new tvN rom-com. Romance Is a Bonus Book will take place with the backdrop of a publishing company, and will tell the story of people who still make print books.

It’s Lee Na-young’s first television drama after a nine-year hiatus (other than the frequent CF’s), that included her marriage to Won Bin. She’s got a fantastic partner in Lee Jong-seok because that boy can really sell noona-romances with his puppy dog eyes. I Hear Your Voice and W—Two Worlds are but a couple dramas where he blew me away.

Lee Na-young plays an overqualified unemployed writer who pretends to be a high school dropout in order to get a temp job at a publishing agency. There, she meets Lee Jong-seok’s character, the youngest-ever editor-in-chief who is a writing genius.

Amongst the supporting cast are Kim Yoo-mi (Can We Fall in Love?) and Kim Tae-woo (Secret Mother), who each play respectively the cold chic director and a strange but comically funny CEO. Then there’s Jung Yoo-jin (Thirty But Seventeen) who plays the straight-laced member of the Content Creation Team who has been singled out for having the most potential.

Wie Ha-joon (Matrimonial Chaos) plays a man that is gentle but direct with his charisma. Kim Seon-young (Dance Sports Girls) plays a refreshing realist and working mom. Jo Han-chul (100 Days My Prince) plays a hot-blooded senior editor. Then rounding out the cast as maknaes of the publishing house team, there’s Kang Ki-dong (About Time) and Park Kyu-young (The Third Charm). Kang’s character is always at the right place at the right time, while Park’s character is carefree and immature.

Both PD and writer explained that their goal was to have a happy time on set. PD Lee said, “Our goal is to work happily until the end. We want to become a team that will have a hard time parting with smiling faces.” And writer Jung added, “I feel happy to be working with such talented people, and I wish to work happily with everyone until the end.”

The production team were enthusiastic in their praise of Lee Jong-seok and Lee Na-young, saying that they could see why both actors were so successful: “With their unique charisma, they exuded a synergy that was electric and a pleasure to behold,” and “There’s no room for boredom with these actors who really make their characters come alive. The talented actors transformed into these characters with individual personalities, and had a strong dynamic that led to warm laughter and expectation for more varied fun to come.”

tvN’s Romance Is a Bonus Book will air during the first half of next year. 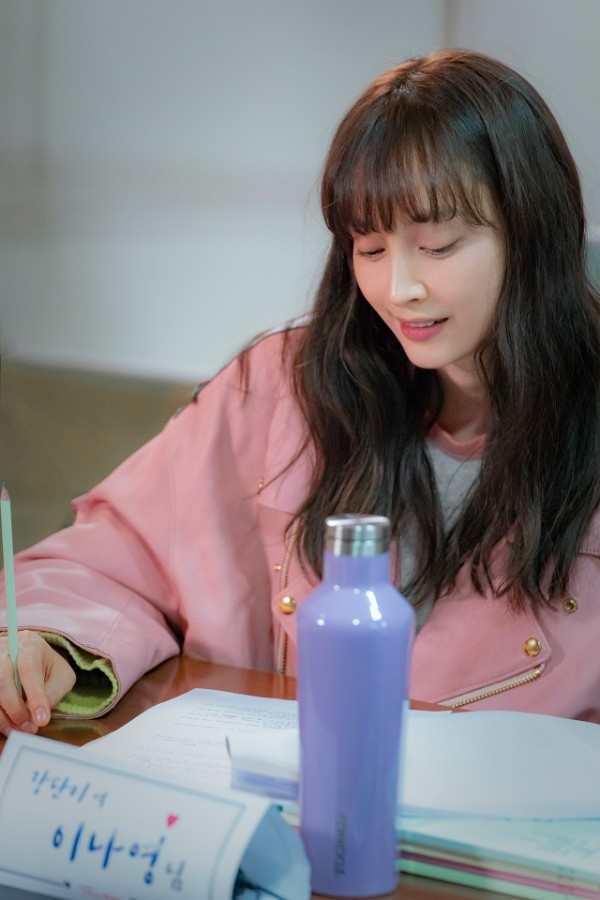 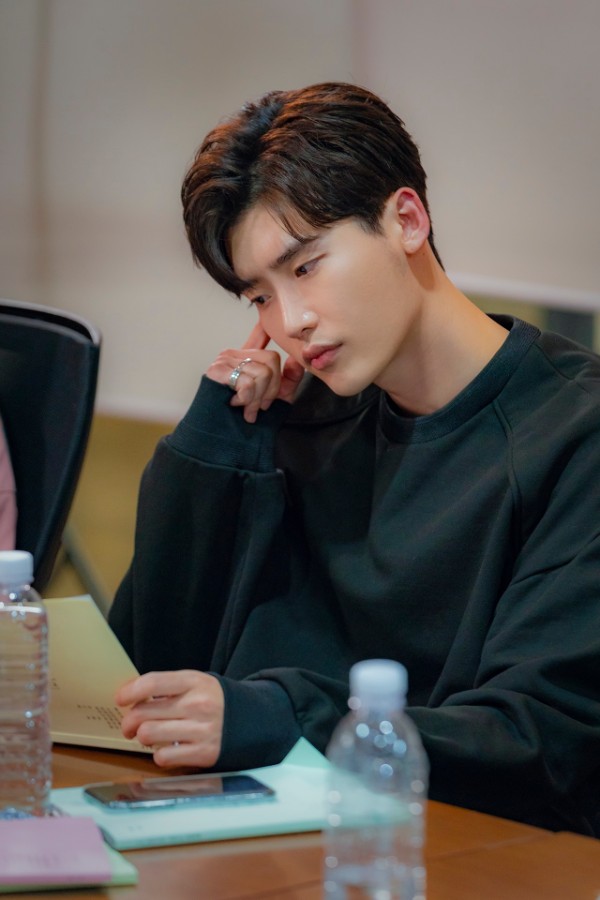 I thought he was ready for his military service a year ago???

I will watch because I like the actors, but I rolled my eyes a bit with the description.

Geeeeeeeeeeenious and young and hot hero (probably) in a position of authority over the overqualified, underemployed, and temporarily employed heroine!!!!

Did I mention that he's a geeeeeeeeniousssss?!?!

Haha! Though I am looking forward to this because I've never seen anything with Lee Na-Young!!!

It's Kang-chul all over again.

Well, I like Jong-Suk and I also love printed books. But nothing else about this stands out to me, so I might wait to hear the first reviews/recaps before committing.

Ugh she's a goddess without even trying.

"who is a writing genius." <== Is he not tired to act a genius or when he's not a genius he has powers... Normal people are nice too :p

Yep. I wish he would take some down to earth roles. I loved it when I started liking him and all his roles seemed fresh and interesting to me, but now... I still like him, but his projects don’t sound exciting to me anymore.

I think he's not genius in Pinocchio and While you were sleeping.

In Pinocchio he was very smart but played dumb because of his man who took him. Or something like that. I don't really remember the details.

In While You Were Sleeping, he wasn't a genius but he had a power and in contrary to Suzy's character, he could change things...

In hear your voice he can hear people mind, in w he doesn't have superpower but a multimillionaire. Why he keep choosing such typical role?
The only role I found him interesting is in hot young blood. I am not interested with his role now, but it's Lee na young, my first favorite Korean actress...so I'll give it a try. I hope the chemistry will be good. I know many people say that LJS have good chemistry with all his acting partner, but I just can not see it. I found while he nailed some sweet moment or scenes, I also found that everything is so generic.

I'm tired of his monopoly on geeeenius roles. Some of us would like to have a shot at it too.

Really looking forward to this. I've watched some of Lee Jong-suk's works and have liked all of them. Not sure about the other actors, but the setting seems interesting.

It's very vague on the plot description though, isn't it? But there's still quite a while until it airs...

PD of dramas like The Witch’s Romance, Heartless City and Life on Mars? I’m definitely in.

LEE JONG-SUK MY LOVE I'm excited for you.

Dream come true for LJS who named LNY as his ideal lady. The plot is simple but I'll watch for both the leads and the PD-writer duo.

I always end up loving the plots of the dramas chosen by Jongsuk. I feel them consistent stories where the characters have growths.
I'm curious to know where this story will take us, but I really like the idea of it developing within a traditional publishing house.
And as for this drama, I already feel wrapped in the aura of LNY and LJS. Seeing them only in the pictures of the reading of the script has generated hundreds of smiles of comfort and satisfaction. So, fighting Romance ...

I like the sound of that huuuuuge publishing office cast. Hopefully they'll all be lovable like Chief Kim. Making hard copies of books these days is already a challenge enough, let's not focus on corporate shenanigans please, Show.

This drama follows Memories of Alhambra right? I'm surprised the script reading pictures have come out so soon. I'm watching this for LJS playing a genius for the umpteenth time. Does he at least have living parents this time?

I am a sucker for noona romances and LJS is the perfect noona-killer (one of my favorite dramas is I Can Hear Your Voice). Even though the drama doesn't sound overly exciting and I am tired of all the leading men being some type of genius or other, I will still watch this because I just can't ignore a noona romance.

"...who is a writing genius"
Please don't make Jong Suk play a pretentious ass like he was in Pinocchio. I hated that character.
When You Were Sleeping was just love. He was amazing.

i feel like theres a lot of expectations riding on this one?

i think if we can say one thing its that lee jong suk has been pretty selective in his dramas within the past few years...they've all been pretty interesting and done well rating wise. here's hoping this one doesn't disappoint!

The synopsis sounds quite a bit underwhelming, but who knows, I would rather have my expectations low and be wowed later (or not) than get completely disappointed over something with a great premise but poor execution (W I'm looking at you). Anyway here's to hoping he actually brings his nth genius character to life. There'd better be something in this character/drama that motivated him to agree instead of taking a rest until enlistment. Let's hope it's not just because LNY is there lol.