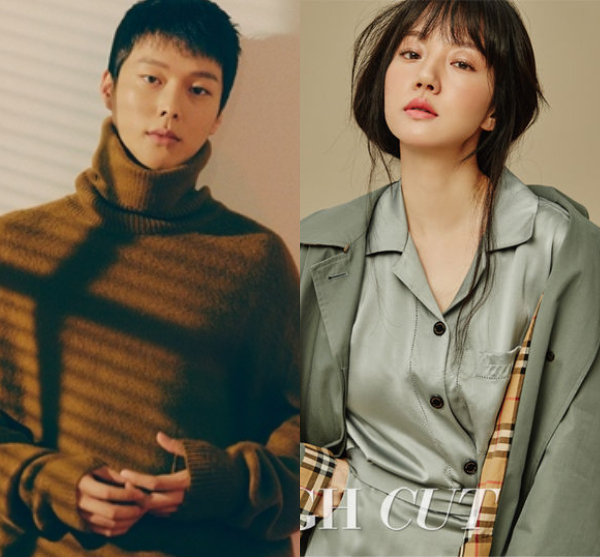 Keep the noona romances coming! tvN is busy planning for its 2019 programming, and one of its upcoming projects is the tentatively titled www. Last month, reports announced Im Soo-jung (Chicago Typewriter) was considering taking the lead role, and now Jang Ki-yong (Come and Hug Me) has been offered the role of her leading man. The two actors are still in the “favorably reviewing the script” phase, but I hope they both sign on, not least ‘cause Jang Ki-yong was involved in one of my favorite noona (?) pairings ever in last year’s Go Back Spouses.

So far, www’s plot description is pretty limited, but the two lines that we have about the story has a lot going for it. The show will revolve around a group of women who have chosen to forego the ‘wife’ and ‘mother’ titles, and have succeeded through their hard work alone, without being subject to discrimination or obstacles. The drama is also labeled as a fantasy show, though the fantastical elements are yet to be revealed. Or is the fact that these women haven’t faced discrimination the fantasy factor?

Penning the script is newbie writer Kwon Eun-sol, and directing is PD Jung Ji-hyun, best known for his work on Mr. Sunshine. Given the relative newness of these two, I’m keeping my expectations low for now, but I hope this show gives them a chance to really make a name for themselves in dramaland.

I really liked Jang Ki-yong in Go Back Spouses, so I’m happy to see him getting drama offers: Besides www, Jang Ki-yong is also considering a leading role in OCN’s Blue Eye. There’s a good chance we might see him in the OCN thriller before www, which is slated to premiere sometime next year.

Via YTN, My Daily

Whoaaaa. I like this pairing. If they both sign on, the script just have to be good.

yup, if this happens, i am IN! love these two!

Jang ki young was endearing in go back spouses. I liked his character in GBC and how mature he was to step out of the equation when he saw how much jinjoo loves bando. Imo, he was one of the 2nd lead character done right.

I surprisingly like this pairing. And if both of them sign on, I hope it'll be the noona romance I can get behind.

I had never thought of this pairing before today, but now that I have it in my head... please, yes? These two are so fantastic. I’d watch them communicate entirely through gazes for 16 episodes.

Also, @jenmole, gosh darn it. Did you see what your son is wearing.

As long as he wears his pocket/nipple shirt, I'm excited to see himmmmmm.

The noona romance loving greenfields is here to squeee! The show sounds good so far!! :)

Oh. Yes. I haven't actually read the article, but I already know my answer to this is Yes.

This is one noona romance I can definitely get into!

wah... Jang Ki Young has already got a chance to get pair with some like Im SOo Jung already! awsome!

Yup a talented boy is getting big. I do think YG is really good at handling its actors, he is a model but a talented actor unlike pardon me his friend NJH.

Loved her in Chicago Typewriter 💖 and he's already proven his incredible acting skills this year. Now I hope the script is equally great~ 🤞🤞🤞

If they're down, I'm definitely down. *heart eyes*

Omg i like this pairing 😍😍😍 .. im not really into noona romance but i will give this one a try!

I never thought I needed this pairing! And JKY pairing with a great sunbae as Im Soo-jung? Go go go!

Pass. This year I watched enough big age gap romances, to give myself a break (from not believing why this people even attracted to each other).

WoW! I didn't know I needed this pairing to happen and now, I want it to happen!

I didn't know I needed this gift. Yes please!!

Jang Ki-yong, I’ve enjoyed his work in Ajusshi, Go Back Couple and the first couple episodes of Hug Me, which I didn’t finish. I hope he does well. Has he completed his military service yet ?

Omg, yes! I absolutely love Jang Ki-yong, he's such a good actor and a total cutie. And Im Soo-jung was my girl crush in CT, she was doing such a good job in that drama. They would be perfect together, I really hope they both accept.

I hope they will take the roles and if they do, sign me up for this!! Love the pairing.

That is definitely fantasy: Women not facing discrimination.

Yes please! Bring it on!

I LOVED HIM IN GO BACK SPOUSES

Woohoo! i'm totally gonna swoon all over it))

I'm all in for these two! I LOVED Chicago Typewriter so much and that made me give my heart to Im Soo Jung also. Girl crush!

And of course, Jang Ki Yong! I still consider the ramp stairs scene as one of my favorite Kdrama scenes. Kyaaaa~~~

After Come and Hug Me I would watch Jang Ki Yong in anything.