When a man finds out he has Alzheimer's, he divorces his beloved wife in order to spare her the heartbreak. When they meet again several years later, she learns the true reason behind their divorce and the illness that changed their relationship forever.

When a man finds out he has Alzheimer's, he divorces his beloved wife in order to spare her the heartbreak. When they meet again several years later, she learns the true reason behind their divorce and the illness that changed their relationship forever. 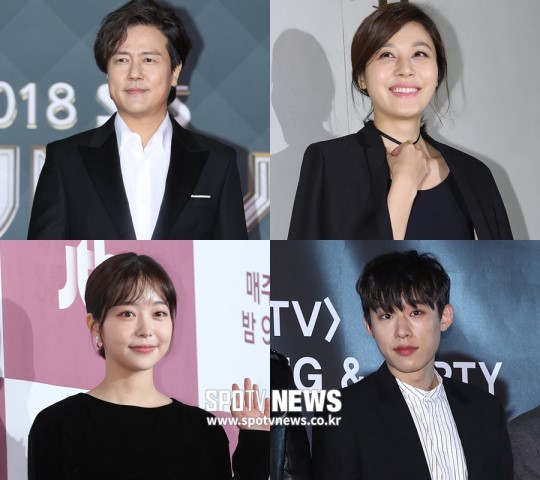 JTBC has confirmed the main cast for their new upcoming melodrama The Wind Blows. Kam Woo-sung (Should We Kiss First) and Kim Haneul (On the Way to the Airport) will costar and the supporting cast will include Kim Ga-eun (The Light in Your Eyes), and Kim Sung-chul (Smart Prison Living).

The drama is a romance melo that revolves around Kam Woo-sung and Kim Haneul’s relationship. In their youth, the pair were in love, but the relationship fell apart. However, a few years on, the two cross paths again and begin to fall in love all over again. The premise is about cherishing both the past and the future that is yet to be.

Kam Woo-sung will be taking the lead role of Do-hoon, a man who’s fallen in love with the same woman twice. While Kim Haneul will play the other lead role, Soo-jin, and she’s described as someone who finds love again after a break-up.

In the supporting roles, Kim Ga-eun’s character is described as a young optimist. Kim Sung-chul will play a young and charming CEO of a special effects company. In other casting news, Lee Joon-hyuk (Doctor Prisoner) and Yoon Ji-hye (Come Here and Hug Me) will be playing an izakaya restaurant owner and chef respectively.

Kam Woo-sung and Kim Haneul are masters of melo but this is the first time the two actors have worked on a project together. The cast recently held the script reading and commenced filming. Directing for the drama will be done by PD Jung Jung-hwa, (Absolute Boyfriend) with writer Hwang Joo-ha handling the script. Hwang previously wrote both seasons one and two of Mrs. Cop.

The Wind Blows will be airing Mondays and Tuesdays on JTBC, and is currently set to premiere in May after Woohoo Waikiki 2 concludes its run.

Asianwiki says a man divorces his wife because he gets Alzheimer's (noble idiocy, much?), then they meet again after 6 years.

Sounds like a depressing hard pass to me. I could almost say it blows, from the title on.

And what condition would he be in after 6 years?

This reminds me of LDW's Bubblegum with JRW. It had a alzheimer's arc too, but they were not married yet at that point.

I'm with you, @lordcobol. This is as depressing as SHOULD WE KISS FIRST and the elders' subplot in MARRY ME NOW. Is it too much to ask for a non-tragic tale of old geezers finding each other again after many years, and making up for lost time without being idiots or terminally ill?

After 6 years, I'd say all bets are off. Or will it turn out that his medical records were mixed up with someone else's? In which case Writer-nim will administer the coup de grâce by having the woman find out that she's got Alzheimer's. I can see it all now. Sheesh.

I love Kam Woo-sung to bits, but cannot deal with another Alzheimer's plot. Time to rewatch ALONE IN LOVE.

I've missed Kim Sung-chul! He was one of my favorite characters in Prison Playbook, and he did a great job as a villain in Player. I hope this role elevates his career in some way.

Did you see to.Jenny? He's wonderful there too.

Seems I’m the only one who is planning to watch this drama. I know it sounds depressing but if they succeed in making me shatterd BUT unwilling to drop, it means they are doing great even if that means I need to buy an extra box of tissue. There were manyyy dramas during the past months that were supposed to make me laugh but failed. For me, successful depressing dramas are better than failed comedy ones. I’m tired of dropping!
P.s as a SWKF? fan, I wish the characters’ names were different!:( Moo-han and Soon-jin / Do-hoon, Soo-jin!

I want to at least give this a try, because I like Kam Woosung, and I think he's hot (shallow much). I'm a fan of SWKF too, and when I first read the synopsis for SWKF, I didn't think I would enjoyed it as much as I did. So definitely going to give this a 2-4 eps try.

Same.
I started SWKF because of Kim Sun Ah but that was the story that kept me in till the end. It made me realize how much I like watching a love story between two adualts with adaults related problems and ups and downs.
And about KWS, I’m with you! That guy is a damn hot ahjussi.

I believe I've watched Kam Woo-sung in two or three dramas and, while he does a great job in his roles, he's either always about to die or in a relationship with someone who is seriously ill and/or about to die. I don't think the man is going to suddenly veer into slapstick comedy anytime soon, it just doesn't seem his style anyway, however it would be a nice change of pace to see him in something less melancholic.