“The National Assembly building has collapsed,” Ji Jin-hee (Misty) narrates, as civilians on a subway watch in disbelief at their government imploding in flames. Ji Jin-hee’s mouth drops in shock as he witnesses the flames from a closeby bridge, and he begins running frantically. This first teaser for Designated Survivor: 60 Days is a short, impactful clip heightening the suspenseful air of this political thriller.

Designated Survivor: 60 Days is a Korean remake of an American series on Netflix by the same name. According to the synopsis, the president of Korea and most of its highest-ranked officials die in this terror attack. The mantle of presidency falls upon the unassuming and unambitious Minister of Environment, Park Moo-jin. He is played by Ji Jin-hee, and for the next sixty days, his mission is to find the suspects behind the terror attack and protect his family and country from them. 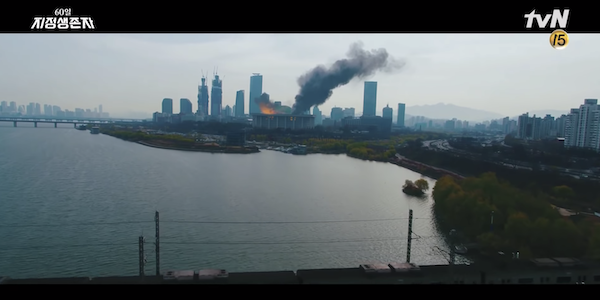 has anyone watched the original?

i was JUST thinking about a show about corruption or political thrillers etc and how it would be cool to see someone who is in politics but isn't trying to grab for money. i might check out the US one!

i really ended up disliking misty and couldn't get through it but all the actors were so good. i loved him in second to last love too. he and kim hee-ae...amazing.

is this not pre-produced? it looks so well shot. hm i'm excited

I did/do. The US version started out as a earnest show with the mystery of what happened at The Capital.

Once Kirkman got into the groove and accepting of his position it went a bit more of the thriller route.

oh cool! do u enjoy it? it sounds cool tbh

Yes I do. I am glad that Netflix picked it up.

awesome! ty for the reply. i am excited then and tbh i might give the US vers a shot further down the line!

Just FYI, it is not a thrill a minute show. It can be a slow burner for some.

I've been looking forward to this drama. Usually I like the korean remakes more than the originals.

how tired am i? i thought the title was a news flash, announcing something that was happening in Korea today. smh. so tired. anyway this looks super interesting and very well done!

Love JJH!
But...this writer? Meeeeeeeeh
He also has credits in DOTS (which was entertaining, but a thematical disaster imo)
Fingers crossed.

I will surely check out this drama! I think Ji Jin-Hee fits the part perfectly.

Lol I read "Smoking Fumes" and "National Assembly" and freaked out there for a second.

Ji Jin Hee!!! It's always good to hear that he's starring in a new drama!

While I haven't watched the original show, this does look interesting. Especially interesting is having Ji Jin-hee in this as I don't think I've ever seen him in a political/government type of role.

11 gadis | clawing my way back after the longest drama slump

A political thriller with a lead who's not busy grabbing for more power or money? Okay, you got my attention, show.

And here is hoping the show doesn't use several episodes making him idiotic or completely incompetent. Kdramas like to play that game.

The US version never played that game. Kirkman was a well educated working professional whose career lead to him getting a position in the government. And while his ambitions was never to be POTUS, he knew his shit and surrounded himself with people who will tell him when he did not.

This reminds me that I still need to finish Misty. I'll need to check this out.