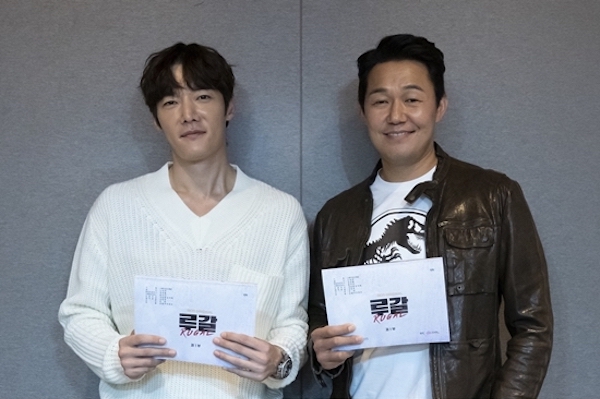 Photos from the first script read of OCN’s latest superhero drama Rugal have been released. The origin story of Choi Jin-hyuk’s (Justice) character begins when he loses both his beloved wife and his sight due to the shadowy, villainous organization, Argos.

The once-upstanding police detective turns into a man on the run, as he is framed for murder. His sole focus becomes his mission for revenge, and along the way, he is recruited by Rugal, a special group of elite bioengineered super-soldiers dedicated to fighting against Argos’ terrorist attacks on South Korea. He receives the first-ever transplant of cybernetic eyes, and goes from a man with nothing but despair to a superhero. 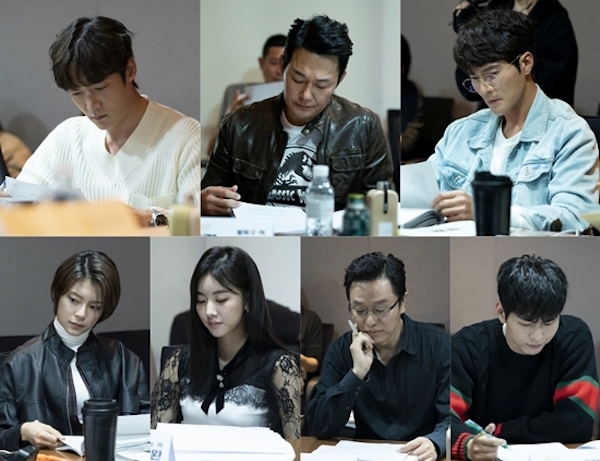 On the other side is Park Sung-woong’s (When the Devil Calls Your Name) character, who is made of absolute evil and is a central part of Argos. With his intelligence and ruthless business mindset, he dreams of conquering the criminal underworld and creating his own empire. When he and Choi Jin-hyuk meet, it becomes the ultimate face-off between the strong and the evil.

Jo Dong-hyuk (The Last Empress) plays the operational team leader of Rugal who used to be part of the top at Argos. After his machine-arm surgery, he joins Rugal and with his level-headed, logical decision-making skills, he’s able to capably lead his team through various missions. He is a character with a strong sense of responsibility.

Kim Min-sang (Stove League) plays the overall head and control tower of Rugal, who has put in his everything to wipe out Argos. A key member of the team is played by Jung Hye-in (Graceful Family) who plays a character with flexible combat skills and speediness, and is thus Rugal’s all-around fighter. 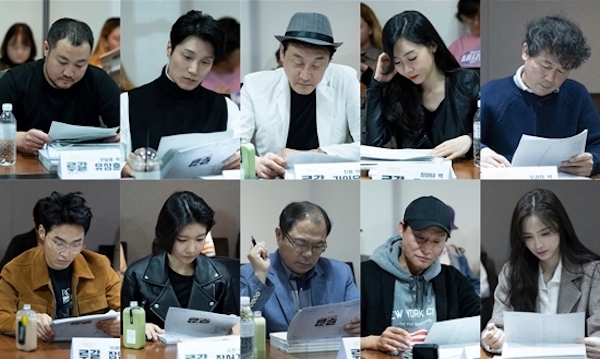 Additionally, Park Sun-ho (Best Chicken) plays the refreshing mood-maker of Rugal, who has artificial skin and torso. He was a police academy graduate who was poised to become a brilliant thinker until his run-in with Argos. Park Choong-seon (Melting Me Softly), Jang In-seob (Justice), and Jang Seo-kyung (Graceful Family) are the doctors and engineers on Rugal’s artificial tissue and mechanical research team.

In contrast, Han Ji-wan (Search: WWW) plays the ambitious heir to Argos, a cutthroat femme fatale who can match Park Sung-woong in charisma and power. Yoo Sang-hoon plays the right-hand man of Park Sung-woong in Argos, and Kim Da-hyun (The Secret of My Love) plays the second-ranking boss. Yoo Ji-yeon and Park Jung-hak (Psychopath Diary) play the other members of the Argos team.

Wednesday-Thursday drama Rugal, directed by Kang Chul-woo (My Secret Romance) and written by Do Hyun, will begin airing on OCN in March.

What is it about series that is stacked from top to bottom and then there is that one lead that sticks out like a sore thumb.

I'm not sure I understand your meaning of "sticks out like a sore thumb".
Comments are strange (imo). What's wrong with Revenge stories?? Those are my favorites. At least if they're done well.
The best revenge kdrama I've seen is Mawang (The Devil aka Lucifer).
As far as Choi Jin hyuk, I'm a fan. Hope he actually gets a good story, a good character and is actually the lead.

I'm in for the cast. And the odd title.

Is there also a hidden meaning behind "Rugal" that I wouldn't "get" since I don't speak Korean?
Since I like revenge stories, I hope the script is good...a few twists will add a lot, and especially if the superhero powers aren't just a gimmick to tell an ordinary story. Guess we'll see when it airs.

Completely forgot about this, I hope jin hyuk brings something new to this character. It sounds like a combination of all of his previous roles.

He is so type casted ... I mean how much revenge can you potray differently? Lol! I think this is his 4th revenge drama.

I know right! I'm struggling to think of a show he hasn't played this character.
Tunnel, The Last Empress, Gu Family Book, to an extent you could include Emergency Couple.

Jin-hyuk, try and play another character in 2020!

Also pride and prejudice (if my memory does not fail) and justice (that was also a revenge drama no?) , And devilish joy? (It was unbearable as well )

"...The once-upstanding police detective turns into a man on the run, as he is framed for murder. His sole focus becomes his mission for revenge,..."
My favorite revenge plot. Though this last year in kdramaland I've been sorely disappointed. Please take the tropes and write something with a clever twist/turn of events, etc., and not just use the superpower as a gimmick.