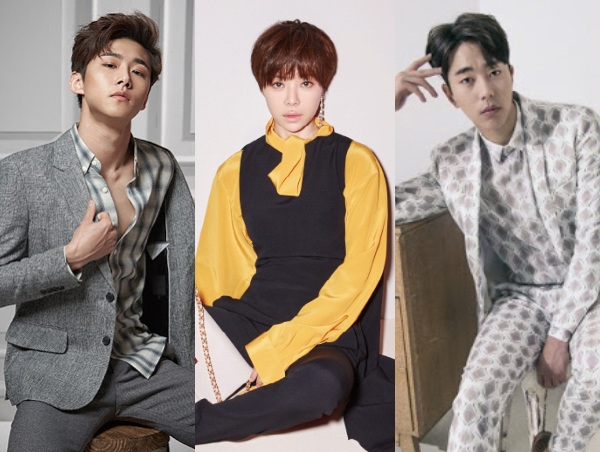 Hwang Jung-eum (Handsome Guy and Jung-eum), Yoon Hyun-min (My Holo Love), Seo Ji-hoon (Welcome) have been confirmed to star in an upcoming KBS drama called That Guy Is the Guy. Hwang plays a strong proponent of the single life, who has chosen to plan her life excluding marriage from her future. One day, she receives the love confessions of two men with completely different charms.

This drama seeks to explore the meaning of marriage and family in the context of the 21st century, as more and more young people choose to be single.

Hwang’s character is the confident and capable project manager of a successful webtoon company. Yoon Hyun-min plays the shrewd CEO of a pharmaceutical company. He’s chic and cool, but there’s also a loneliness within him.

Seo Ji-hoon plays a star webtoon artist who has a genius-level talent and a lovable personality. He grew up with Hwang’s character; though she thought of him as a little brother, he has harbored a secret crush on her for years.

Yoon Hyun-min and Seo Ji-hoon have played love rivals before in tvN’s Mama Fairy and the Woodcutter. I found their bromance to be cute, and so I look forward to their dynamic again in That Guy Is the Guy.

Monday-Tuesday KBS drama That Guy Is the Guy, directed by PD Choi Yoon-seok (Mystery Queen 2) and written by Lee Eun-young (Sweden Laundry), is scheduled to begin airing this summer.

This had me until Hwang Jung eum. Her acting is like fingers across a chalkboard and just grates me. Grates me.

Her acting and the makeup artists who always seem to hate her! Just NO!

Hwang Jung Eum. Her best two dramas, (imho), were Giant & Secret. You can’t go wrong with either of those two. Between those two, go with Secret.

I wish Seo Ji-hoon can do more age-appropriate romances.

I think it's because most of the leading ladies his age are being paired with older men (like Kim Yoo Jung (20) with Ji Chang Wook (32) and Kim Bo Ra (24) with Joo Sang Wook (41), Kim So Hyun (20) with Jang Dong Yoon (27)). I think it's only possible if he sticks to youth dramas and he might want to broaden his appeal past those.

What do you mean? Shin Ye Eun is 1998 born and Gong Seung Yoon is 1993 born. His dramas have been age appropriate. He's just not getting cast opposite people you want but he is doing the right dramas mostly.

Flower Crew: Joseon Marriage Agency is one of my all-time favorite dramas, so I love the pairing between him with Gong Seung-yeon, and I am rooting for human Seo Ji-hoon to get the girl Shin Ye-eun in Welcome.

No problem being cast opposite them. Sometimes he can work with older people. He has a balance.

Sigh, I doubt he is going to get the girl, here or in Welcome. I need him to be the lead that gets the girl. At this point, any girl. Just GET THE GIRL!

Hwang Jung-eum is doing two dramas this year! That's so great!
Also she and Yoon Hyun-min are the same age so a proper pairing for once! :D

I like the idea of a drama against marriage, but it's probably going to end in marriage, isn't it?

Totally! But for sure it will be funny and at least at the beginning, maybe, the female lead will makes us proud. At least for 5 to 8 episodes! 😂😂😂😂
I am also against marriage, although living totally alone is also not that good... I am for living with other girls who are so resolved as we are, to just remain single. Marriage is a good thing for some but not for everyone. That is why there is also a lot of divorce people everywhere and single moms.... I rather be a spinster than a single mom abandoned with a child.... That would break my heart just too much, and most men abandon their children, at least where I come from is like that.... my own father abandoned his children, my mom was no good either.... so, no, some people don't have to get married. It is ok to live single and just have friends and pets....
My humble opinion.

That's a totally valid opinion. I just don't like what marriage means - it's a document that affects what you own, what you will own, it has so much control.

Loving long-term relationships built on mutual respect and trust? Yes!
Marriage? Not so much.

Totally that.
Oh, I miss Bae Ta Mi (WWW). She didn't want to get married, she didn't get married...

In Search WWW, none of the couples end up in marriage. But with HJE in a rom-com (again)? Hmmm... not much confidence in her acting, she has kinda gone downhill after Kill Me Heal Me and my annoyance to her acting escalate in She Was Pretty.

I'm afraid I found her performance in the beginning of She Was Pretty so off-putting I couldn't continue with that drama past the first half an hour.

The thing is, I think she does way better in melodramas than comedies. I never finished Secret, but I thought she was good there, and I liked Can You Hear My Heart a lot too. Maybe she's mellowed out by now anyway?

"That Guy is The Guy" Title of a show or just a line from Tell Me What You Saw?
(For those who aren't watching, the mysterious big bad is referred to as "The Guy")

I guess it saves on having to think up actual character names. ;-)

It's almost one in any drama. It may be the new trope...

Yeah. Webtoon minions are becoming as ubiquitous as zombies and folks with face blindness used to be. I wonder which other emerging professions will crop up next as gainful employment in Kdramaland. ;-)

Thanks for the casting news for THAT GUY IS THE GUY, @tineybeanie. It's sounding like a mash-up of MAMA FAIRY AND THE WOODCUTTER and THE UNDATEABLES / HANDSOME GUY AND JUNG-EUM. The latter fell flat despite Namgoong Min's valiant efforts to keep it afloat, IIRC.

Hwang Jung-eum can sometimes be so screechy I want to run away with my fingers in my ears. In LUCKY ROMANCE, however, she reined herself in, and was quite entertaining. On the other hand, I will never be able to unsee some of the idiosyncratic outfits her character wore. *shudder*

The bromance between Seo Ji-hoon and Yoon Hyun-min in MAMA FAIRY was great fun, with a couple of karmic twists that came out of left field. The show suffered from too many extraneous characters who diluted the action and detracted from the main story line. Alas, SJH's character was once again left holding the bag in FLOWER CREW, JOSEON MARRIAGE AGENCY. It would be nice if he finally got the girl, but she says she doesn't want to be gotten... The SLS is strong in this one.

Screenwriter Lee Eun-young wrote PAINTER OF THE WIND, one of my favorite sageuks. The only shows directed by PD Choi Yoon-seok that I've seen are CHIEF KIM and two KBS drama specials with Lee Sang-yeob: HOME SWEET HOME and YOU ARE CLOSER THAN I THINK. I loved the uproarious CHIEF KIM to bits, which tempts me to give THAT GUY IS THE GUY a shot. Considering the epic bromance between the righteous cooker of books and the gluttonous psychopath in CHIEF KIM, mayhap the female lead will get to have the marriage-free life of her dreams after all. Then again, there's the possibility for a whacked-out DATING NOT MARRIAGE reverse harem... ;-)

"Hwang Jung-eum can sometimes be so screechy I want to run away with my fingers in my ears. " -- exactly! I think it really is up to the director to control her performance. I hope that happens, because I like both male leads.

@lindag latebloomer,
I'm keeping my fingers crossed that PD Choi, who co-directed CHIEF KIM with Lee Jae-hoon, will ride herd on her nibs to put a lid on the hypersonic vocalizations. He successfully managed the three-ring circus that was CHIEF KIM. I'd like to think that he has a good shot at pulling off this drama.

From what I can gather, it is not a rom-com, but a non- or even anti-matrimonial drama. I think. Are we in for co-habitation hijinks, a bunch of ascetic hermits, or what?! If all else fails, the female lead might consider shacking up with a hologram. ;-)

Spoiler:
Seo Ji-hoon got the girl/old lady in Mama Fairy... He was the reincarnated husband.
But the drama was weird.
I didn't watch the joseon marriage agency, but now in this drama, I think he will be second lead... not a bad thing either, since his acting is still young.
We will see...

Can we just get a romance with YHM and SJH instead.

I wish all the actors well. Recently here in DB there was a bit of a dust up concerning the age difference between the leads in the upcoming Channel A drama UNIQUE! CHEF MOON.

So here we go again:

Seo Ji-hoon plays a star webtoon artist who has a genius-level talent and a lovable personality. He grew up with Hwang’s character; though she thought of him as a little brother, he has harbored a secret crush on her for years.

After a quick online check I discover that between Hwang Jung-eum and Yoon Hyun-min (35 in April) there is less than a four month age difference with he being the younger. Pretty close in age. That's good.

However, between HJE and Seo Ji-hoon (23 in April) there will be a 12 year age difference. Little brother indeed.

O/T. I am pleased to report from the field (for those not watching) that in THE GAME; TOWARDS ZERO the age difference between leads Taecyeon and Lee Yeon-hee is one year with he being the younger.
Coming to the final 2/4 episodes and speaking for myself they have made a nice couple. I don't want to give any spoilers so that's all i can say.

Remember that it is not the age of the actual actors that matters but the age of the characters. The actress in UNIQUE chef may be much younger than the ML but I have seen a recent picture of her and she looks quite mature- she could pass for 35 if she needed to (the file picture in the DB write up had to be from the days when she was part of Kara).

Hmm how rare is it that the male leads are rivals again in another drama??? I really tried for Yoon Hyun Min, but I couldn't last through Mama Fairy. Glad to see him more active though.

Hahaha, oh yeah. How could I forget that. I've seen those dramas. Been a while.

In Heartless City, they weren't opposite to each other. Yoon Hyun Min's character didn't love the FL but another girl.

Am I to believe this woman is Hwang Jung-eum? Whaa...

so for how how many episodes will she be screaming in this one?? before they tone it down?? it has just become her signature thing hasn't it??

Has anyone watched Sweden Laundry? What was the story like?
I'm wary of starting another romance drama starring Hwang Jung-eum because I didn't enjoy My lucky romance.
Will try to check out the first episode.

I like the 2 male leads but hate Hwang Jung-eum. I have PTSD from her screeching in she was pretty. And she needs to sue her plastic surgeon.

i love all of them and Now i’m waiting for this show... 😘